After a slow couple months of crime television, saved only be the launching of the new Magpie Murders series, which has graciously given you and your mother something to discuss over the holidays, November is back with an array of choice offerings. Personally, I’m going to trust in Steven Knight’s wild reimagining of already bizarre historical events (Rogue Heroes), but there’s plenty more to be excited about.

Emily Blunt and Chaske Spencer star as an Englishwoman and a Pawnee ex-cavalry scout united in a quest for revenge on the western ranges of 1890s America. The series, created by Hugo Blick (The Honourable Woman), promises plenty of bloodlust and violence bordering on the mystical, all of which fit nicely into the tradition of gritty neo-westerns.

Taylor Sheridan looks to spread his magic touch beyond the ever-expanding Yellowstone universe, now bringing his signature mix of crime, infighting, and ‘family’ drama to a story about an aging mafia capo sent into near-exile in the wilds of Memphis. Sylvester Stallone gets the star turn, but the best part of the new series is going to be watching him put together his new ‘crew’, which includes Andrea Savage, Martin Starr, and a long slate of actors ready to chew up the scenery.

Steven Hardy has a track record of taking historical crime and war stories and making them much, much stranger than anyone could have possibly expected. (I’m not talking only to the Peaky Blinders fans out there; I’m looking for the Taboo defenders.) His latest is based on the book by Ben Macintyre, about the motley crew that formed the SAS, and it promises a lot of rowdy, raunchy adventures along the way to violent ends.

This series, headed to the US and with a second season soon to come, is a bit classier than you might think, since it traces its lineage to a video game. We’re essentially following a fable world of modern-day London in the midst of a vast and intricate gang war. Alliances are formed and broken, all against a suitably noir backdrop and a lot of brooding looks into the murky distance. It all adds up to quite an enjoyable time.

The Chippendales back story, replete with crime and struggle, has been getting a lot of play lately, and here’s some more, from creator Robert Siegel (Pam & Tommy, The Wrestler, Big Fan), and starring Kumail Nanjiani. Looks like a bit of glitzy, sleazy fun with a strong performance at the center.

Venezuela seems to be the new ‘here be dragons’ setting for gung-ho military thrillers (see, the new Jack Ryan series), a development I can’t say I’m too happy about, and to be honest, there’s really exceedingly little chance I’m going to actually watch whatever Echo 3 is, exactly, but it has a pretty solid cast and it looks like quite a lot of production value was poured into it, so on the chance you want to go play special ops in the jungle with some talented people, this might be the show for you in November. 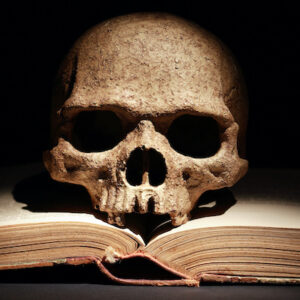 (Adapted from the introduction to The Year’s Best Dark Fantasy & Horror, Volume 3, edited by Paula Guran.) * Poverty,...
© LitHub
Back to top