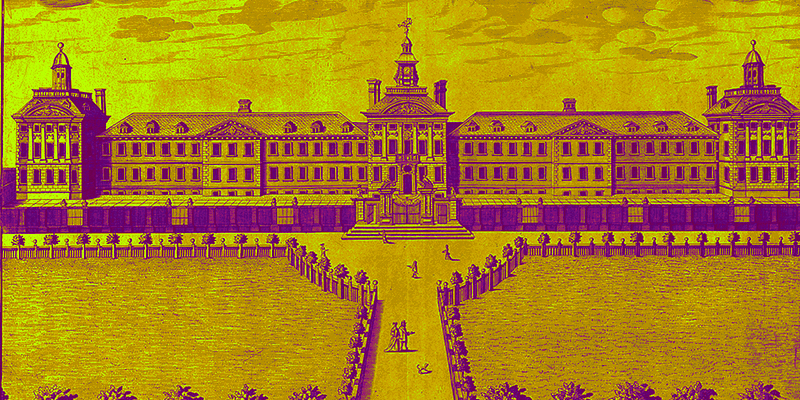 Modern London offers plenty of inspiration to the historical novelist tracing the paths of yore.

My historical crime novels The Bloodless Boy, The Poison Machine— out on October 25!—and a subsequent sequel The Bedlam Cadaver are all set during the Restoration era of late 17th century London. All three books have a firm grounding in the science—the ‘New Philosophy’—of the time.

After 1666’s Great Fire, one of my main characters, Robert Hooke, was appointed as City Surveyor. (Yes, I use real people in my fiction.) Hooke oversaw the rebuilding of a more fire-resistant city, setting regulations, dictating street widths and which materials should be used. He personally surveyed ground plots and adjudicated disputes over land use, and awarded compensation. (And was handsomely paid to do so.) His original plan for the ‘New London’, produced immediately after the destruction, is lost. According to contemporaries it sought to impose a grid system of thoroughfares, sweeping away the old scheme. Presumably, it was similar to Christopher Wren’s plan, which does survive. Of course, existing ownership got in the way, people desiring their original plots to rebuild on, so London’s layout remained much as it was before the Fire. In Wren’s words, it slid ‘into its old Barbarity’. For me, Hooke’s attempt to introduce a ‘rational’ solution to the problems of an expanding, sprawling city—and importantly, its failure—became an attractive metaphor for my two protagonists’ investigation. Hooke and his assistant, Harry Hunt, both employed by the early Royal Society, bring their new philosophical skills to bear on a murder investigation.

For my first novel, The Bloodless Boy, I located scenes depending on whether or not Hooke surveyed or designed them. Outside his tramelling influence became a sort of wildness where terrible things happen. The first body—the eponymous boy—lies just beyond where Hooke oversaw the widening and straightening of the Fleet River. The biggest project of rebuilding London until St. Paul’s was built, the Fleet south of Holborn Bridge was now an easily navigable canal. (Hooke also designed the bridge.) Achieving this was far from easy, and took four years: the riverbed had to be re-dredged after floods, new timber wharfs collapsed from the weight of the banks, and groundwater washed away new sluices and drains.

The boy has been drained of blood, repeatedly; Sir Edmund Bury Godfrey, the investigating Justice, thinks Hooke and Hunt useful to him for their expertise in transfusion. Transfusion and circulation became the dominant metaphors of the book, bringing with them notions of exchange, commixture, penetration, removal. Pumps. Bleeding, which was a standard treatment then. The humours of the blood. The function of the heart.

I wanted to start with Harry moving through London streets, as I had a (perhaps airy-fairy) idea of him as being like a platelet circulating around London, subject to forces much larger than him. (The oxygen-bearing role of red platelets becomes more important later in the story.) To get to the Fleet from his home outside the City wall Harry has to cross Moorfields, where he passes the Bethlehem Hospital, another example of Hooke’s architecture. A huge building, 500 feet across and with 120 patients’ rooms, Hooke designed it as a light and airy place (its glassless windows allowed the restorative effect of fresh air) for the compassionate treatment of London’s mad. Only later, by Hogarth’s time, did it gain the dark reputation ‘Bedlam’ has for us. Nevertheless, I mention it on the first page of the story to foreshadow the madness Harry and Hooke meet during their investigation of the boy’s murder.

A location I return to throughout the books is Gresham College, an Elizabethan mansion in Bishopsgate. (Tower 42, formerly the NatWest Tower, now stands on the site.) This was Hooke’s home from 1664, when he became Gresham’s Professor of Geometry, until his death in 1703. Gresham became the meeting place of the Royal Society, as Hooke was also the Royal Society’s Curator of Experiments. (He complained of sore inconvenience from having to transport experimental equipment and models to its previous meeting place, Arundel House.) Hooke built an observation platform above his rooms for his astronomy, which can be seen in George Vertue’s engraving of Gresham College of 1740.

When another dead boy’s found, it’s stored at the Royal College of Physicians on Warwick Lane. Hooke designed this building—to replace the previous one on Knightrider Street destroyed by the Fire—including an anatomy theatre with steeply raked seating. Again, he made it light-filled, for better observation of the dissections. I have Hooke, when leaving the College, inspect the stone to see how it’s withstanding the corrosive effect of 17th century London air.

The choice of location for another murder victim fitted my theme of blood circulation well. The Morice waterworks under London Bridge pumped water through elm pipes up to as far as Cornhill. First established by Pieter Morice, a German engineer, in 1581, his descendants continued their operation and profited greatly from them. I have its wheels stopped by the dead body.

Every good thriller needs a fight. I knew I wanted one at the top of the Monument as soon as I read Hooke’s diary entry of the 24th April 1676: ‘Pick pocket broke his neck from Fish Street Hill piller.’ Whether this was a suicide or an accident (the balcony only had a simple low rail in those days) I don’t know, but I staged a chase into the Monument and up its stairs, and a struggle on the icy platform. (The Bloodless Boy is set in winter.) Hooke designed the Monument as an immense vertical telescope, a 200-feet-tall instrument, with one lens down in its basement and another mounted inside the blazing copper urn at its top. It was also somewhere he could conduct barometric and gravitational experiments; he made each of its steps exactly six inches high for accurate measurement. Sadly, vibration from traffic affected his gauges, hampering precision. The London-as-a-body theme is extended further here: the Royal Society—and so, therefore, the New Philosophy—was an exclusively male club. Hooke’s attitudes, especially towards his niece, and Harry’s inability to see what’s in front of his nose when it comes to the women around him, are quintessentially patriarchal. Having a fight on top of the 200 feet tall Monument is, I think, a nice image for this aspect of the story.

I decided the scene towards the end of the book where the ‘Mock Pope’ is carried in an anti-Catholic procession, witnessed by thousands of Londoners, should be at Aldgate because a) it actually went through there and b) it gave me another link to Hooke, who oversaw the construction of a brick-lined sewer from Aldgate to Crown Hill, as well as designing a new postern gate through the old Roman wall at Crouched Friars. The gate, with the Pope’s effigy passing through it, also gave me a more female image to put into readers’ minds, and an explicit reference to birth, another clue to the bloodless boy’s identity.

In The Poison Machine I again have Gresham College, but Harry’s both pushed and pulled to leave its safety—or the illusion of its safety. He leaves Hooke and the Royal Society, working instead for the Board of Ordnance and its Surveyor-General, Sir Jonas Moore. Again, I needed a location for ‘the body’. (Most murder investigations need one, I think.) I wanted this scene to be away from London, but still a place where nature’s been altered and exploited. I used to live near the Cambridgeshire Fens, land drained of its water by complex works built to channel the water away, the water kept moving by more pumps. The perfectly straight New Bedford River—another partly artificial waterway—and a sluice became the scene of Harry’s inspection and identification of the body. (This time, a dead man.) Although the Denver Sluice was designed by Cornelius Vermuyden in the 1650s, Sir Jonas Moore was heavily involved in the draining of the Fens, and had produced a detailed sixteen sheet ‘Mapp of the great Levell’. (As an aside, and bizarrely, his older brother was murdered, bewitched by Elizabeth Sothernes, one of the Pendle witches.) As a Fellow of the Royal Society, and, indeed, its Vice President, Moore was another ‘virtuoso’ of the New Philosophy, so I still had a link to it.

For most of The Poison Machine, Harry’s away from Hooke and therefore his architecture, so I opted to use buildings that still exist, and so can be visited. Scenes are set in the Eagle and Child Inn and Trinity College in Cambridge, and at the kontor (or Hanse House) and the Globe Inn in King’s Lynn. Harry has to go to Paris, which takes us to the Bibliothèque Mazarine, within the Palais de l’institut de France, and the Hôtel de Bouillon, now called the Hôtel de Chimay. And, back in London, St. Bride’s Church off Fleet Street and the Bell, which was built by Wren for the workers building St. Bride’s. There’s a long scene at the end of the book in Somerset House, where I fictitiously have Robert Hooke overseeing preparations for Queen Catherine Braganza’s Catholic Consult. In fact, as far as I know, only a grand stable block designed by him was built there in the early 1670s. It included stabling for thirty-six horses, together with lodgings on four storeys. 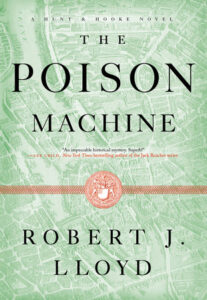 The Bedlam Cadaver, coming in 2023, returns us to Hooke’s Bethlehem Hospital.

Featured image is credited to the Wellcome Collection. 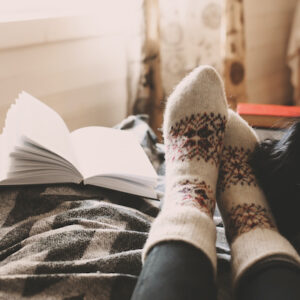 In mid-October, Kensington Books, publisher of some of the finest cozy mysteries, hosted its first Cozy Min Con in two years...
© LitHub
Back to top