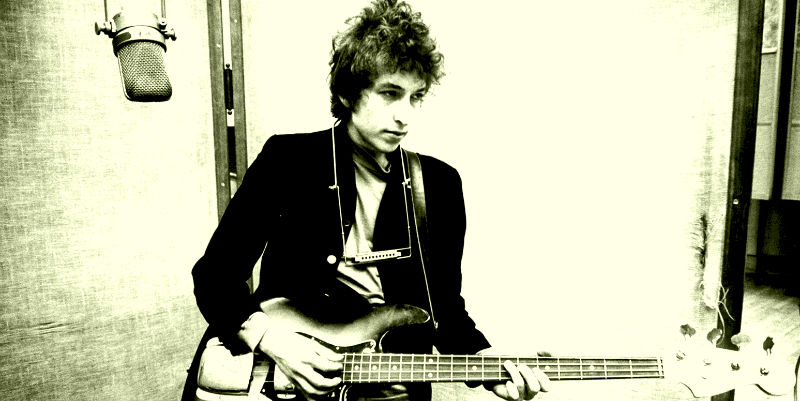 Reconsidering Dylan as a noir poet and true crime balladeer

Given his status as America’s greatest musical storyteller, if not its all-around greatest songwriter (it’s not like any other rock stars have a Nobel Prize for Literature), it only makes sense that Bob Dylan would have produced his share of songs about crime.

In fact, the subject is one of Dylan’s favorites. He returns to it time and again, and after nearly 60 years of making music, his catalogue is overflowing with lyrical retellings of infamous true-life cases, protest anthems aimed at the entire criminal justice system, gothic murder ballads, outlaw folk tales, and rollicking numbers as hardboiled as the most two-fisted pulp novel.

On the occasion of the new Netflix documentary Rolling Thunder Revue: A Bob Dylan Story by Martin Scorsese, here are 10 classic Dylan songs steeped in crime and punishment, justice and retribution, theft and bloodshed, and all other manner of mischief and wrongdoing.

Dylan’s politically-charged album The Times They Are a-Changin’ conveyed a deep concern over the racist violence erupting throughout the country during the turbulent Civil Rights era. This song covers the real-life murder of Hattie Carroll, a middle-aged black barmaid (and mother of 11), by William Zantzinger, the scion of a wealthy tobacco farming dynasty, at a Baltimore Hotel in 1963. The drunken Zantzinger, who caused Carroll’s death from a brain hemorrhage after striking her in the head with a walking cane, received a mere six month jail sentence for the crime.

Dylan’s furious account has lost none of its power or relevance in the decades since. It’s hard to listen to this song and not think of recent examples—George Zimmerman, Brock Turner, Ethan Couch, any number of acquitted police officers—that betray the American justice system’s innate corruption.

Another track from The Times They Are a-Changin’, this gothic murder ballad tells a tale of ratcheting terror and desperation leading to a family annihilation. The titular Hollis Brown is a poor farmer who mentally deteriorates alongside his failing farm, until he finally snaps and murders his wife and children, as well as himself, with a shotgun.

The descriptions of poverty, family strife, and apocalyptic violence set against the capricious landscape of rural America call to mind the work of William Faulkner and Flannery O’Connor, while the slow-building dread and nightmarish detail anticipate the horror-noir of David Lynch, who covered the song on his 2013 album The Big Dream.

While there may not be any explicit mention of criminal activity in this standout from Dylan’s groundbreaking Highway 61 Revisited, it nonetheless deserves recognition here.

Conventional wisdom holds that the central figure of “Mr. Jones”—who finds himself lost in a fugue state amidst a surreal landscape reminiscent of the stories of Franz Kafka and the paintings of Francis Bacon—is based on Dylan’s experiences with thick-headed music reporters at the time, and the song is often read as a metaphor for the broad social upheaval of the ‘60s.

But on a purely visceral level, the jangling, off-kilter beat, combined with the fever dream imagery of the lyrics (a number of which might be referencing classic noir films of the circus variety, such as Freaks or Nightmare Alley) seep “Ballad of a Thing Man” in thick layer of illicitness, paranoia, and implacable, inescapable doom—in other words, pure noir.

Dylan wrote and recorded this elegiac ballad for Sam Peckinpah’s equally elegiac western/crime drama Pat Garrett & Billy the Kid (1973), in which he also acted in a supporting role.

Even if you haven’t seen the film, Dylan is able to impart the scene it overlays—a lawman lays dying after being shot—through only a handful of lines. Released as a B-side on the film’s soundtrack, the song would go on to become one of Dylan’s most oft-covered and popular songs.

While today it is just as often associated with Guns and Roses (who recorded their version of it on the soundtrack of 1990’s Days of Thunder), anyone familiar with Peckinpah’s flawed masterpiece can’t help but think of the scene wherein a gut-shot Slim Pickens exchanges a silent goodbye to his tearful wife when they hear it.

1975’s Blood on the Tracks features some of Dylan’s most complex musically and lyrically complex songs, including “Lily, Rosemary & the Jack of Hearts,” which tells a tragic—but cathartic—tale of theft, desire, vengeance and punishment.

It’s an ensemble story featuring a cast of memorable characters, including the mysterious gambler and thief, The Jack of Hearts; Big Jim, the rich and powerful owner of a diamond mine; Big Jim’s long-suffering and suicidal wife Rosemary; and the beautiful dancer Lily, who is romantically involved with both men. Fate draws this foursome together backstage during a cabaret, while a daring heist is happening nearby. It all leads to a reckoning in which justice is meted out in measures both fair and cruel.

One of Dylan’s most cinematic songs, there were a couple attempts to adapt the story for film, but unfortunately none came to fruition.

In between the two legs of his Rolling Thunder Revue tour (the subject of Scorsese’s new documentary), Dylan released the masterful Desire, which featured this detailed account of the trials and tribulations of Rubin “Hurricane” Carter, an African-American boxer convicted of a triple homicide in 1966, as its opening track.

Carter’s case became a political rallying point, as many believed he was innocent and had been framed by police as payback for his participation in the Civil Rights movement. Dylan was one of Carter’s most adamant supporters, holding a benefit concert on his behalf and recording this song (which would become the biggest hit off Desire) in his honor. Charges would eventually be dropped against Carter, who was released from prison in 1985 after serving 22 years.

While entirely of a piece with his previous protest anthems, Dylan’s hard-charging account of the night of the murder and the eventual railroading of Carter give “The Hurricane” a true cinematic quality, so it’s no surprise the eventual movie adaptation plays at times like a full-on adaptation of Dylan’s song.

The longest track off Desire is another true-crime story, this time chronicling the life and death of Joey Gallo, an infamous mob enforcer and triggerman who worked for New York’s Colombo crime family until he was gunned down in a Manhattan restaurant in 1972. In real life, Gallo—known as “Crazy Joe”—was a brutal and fearsome figure who based his image off Richard Widmark’s uber-psychotic gangster Tommy Udo in the film Kiss of Death (1947), so it proved a strange choice for Dylan to recast him in song as a noble outlaw one step removed from a pacifist.

Unlike “The Hurricane”, “Joey” failed to sway public opinion on its central figure, with a number of critics taking Dylan to task for attempting to turn such an undeserving figure into some kind of martyr, but it remains one of Dylan’s most memorable songs about life on the wrong side of the law.

Yet another track from Desire, this Spanish ballad concerns a pair of star-crossed lovers on the run in Mexico. It’s revealed over the course of the song that the narrator has killed a man named Ramon, causing him and his beloved to flee across a desolate country replete with dangerous cantinas, romantic bullfights, ancient Aztec ruins, and ghostly churches, all towards an inevitable appointment with death.

Dylan’s Mexico is the haunted and mythic landscape found throughout pulp film and literature, and one imagines he was thinking of the films of his former director Sam Peckinpah (especially Peckinpah’s brutal Bring Me the Head of Alfredo Garcia (1974) when he wrote it.

1985’s Empire Burlesque is one of Dylan’s most heavily derided albums—a hollow, overproduced sampling of ‘80’s excess and flash to which time has not been kind.

While there are a few bright spots on the album, the second track, “Seeing the Real You at Last” is not necessarily one of them. However, it does deserves mention here, as it made up almost entirely from bits of dialogue from classic film noirs, including Double Indemnity, The Maltese Falcon, The Big Sleep, Key Largo, To Have and Have Not, and Rear Window.

It’s unfortunate that the music feels so disparate from the lyrical content, being that the latter nails the sense of cynicism, disillusionment, and dark epiphany central to so many of its cinematic influences.

During his time with the supergroup The Traveling Wilburys, Dylan wrote the lyrics for this parody of Bruce Springsteen’s music. An chaotic tale of violent criminal misadventure set against the backdrop of a dying Jersey City, it’s reminiscent of early Springsteen street anthems like “Lost in the Flood” and “Hard to Be a Saint in the City,” even as it makes a number of explicit references to later tracks and albums.

Parody though it may be, it’s a gnarly hardboiled thriller in its own right, tracking the journey of two low-rent drug-dealers—the psychopathic Monkey Man and troubled Vietnam vet Tweeter (who it’s suggested is a trans woman)—on their way to doom. Along for the ride are the Monkey Man’s femme fatale flame Jan, and their arch-nemesis—and Jan’s brother—an obsessive and corrupt policeman known only as The Undercover Cop.

A full-on descent into hell (literalized during the hard-charging chorus: “And the walls came down/All the way to hell…”) filled with double-crosses, car chases, shootouts, and an ultimate sense of futility, the lyrics read like a mashup of Robert Stone, Elmore Leonard, Jim Thompson, Chester Himes, and George V. Higgins as much as they do a loving caricature of The Boss. As far as Dylan-penned songs about crime, only “The Ballad of Hollis Brown” matches it for leanness and meanness.

'In Cold Blood' and the Murders Truman Capote Missed 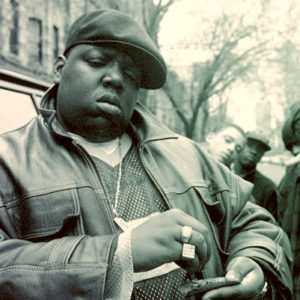 On March 9, 1997, Christopher Wallace—aka Biggie Smalls, The Notorious B.I.G., a man who still holds a claim on the title...
© LitHub
Back to top