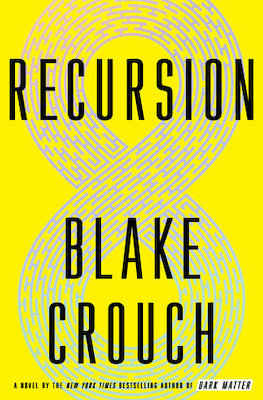 The following is an exclusive excerpt from Recursion, in which Blake Crouch (Dark Matter) introduces a new disease sweeping the nation: False Memory System, which infects people with unfamiliar memories in place of their own. A neuroscientist and a cop team up to preserve memories before the endemic plagues the world, dissolving all recognizable human life in its path.

Standing in the shower at six a.m., trying to wake up as the hot water sluices down her skin, Helena is struck with an intense sensation of having lived this exact moment before. It’s nothing new. Déjà vu has plagued her since her twenties. Besides, there’s nothing particularly special about this moment in the shower. She’s wondering if Mountainside Capital has reviewed her proposal yet. It’s been a week. She should’ve heard something by now. They should’ve at least called her in for a meeting if they were interested.

She brews a pot of coffee and makes her go-to breakfast—black beans, three eggs over-easy, drizzled with ketchup. Sits at the little table by the window, watching the sky fill with light over her neighborhood on the outskirts of San Jose.

She hasn’t had a day to do laundry in over a month, and the floor of her bedroom is practically carpeted in dirty clothes. She digs through the piles until she finds a T-shirt and a pair of jeans she isn’t totally ashamed to leave the house in.

The phone rings while she’s brushing her teeth. She spits, rinses, and catches the call on the fourth ring in her bedroom.

“I thought I’d missed you. I didn’t want to bother you at the lab.”

“Just thinking about you. Any word on your proposal?”

“I have a really good feeling it’s going to happen.”

“I don’t know. This is a tough town. Lots of competition. Lots of really smart people looking for money.”

“But not as smart as my girl.”

She can’t take any more of her father’s belief in her. Not on a morning like this, with the specter of failure looming large, sitting in a small, filthy bedroom of a blank-walled, undecorated house where she has not brought a single person in over a year.

“How’s the weather?” she asks to change the subject.

“Just an inch or two. But the mountains are white.”

She can picture them—the Front Range of the Rockies, the mountains of her childhood.

She hears him exhale slowly. “We’ve had better days.”

Not on a morning like this, with the specter of failure looming large, sitting in a small, filthy bedroom of a blank-walled, undecorated house where she has not brought a single person in over a year.

“Last night, we played gin rummy after dinner, like we always do. And she just . . . she didn’t know the rules anymore. Sat at the kitchen table, staring at her cards, tears running down her face. We’ve been playing together for thirty years.”

She hears his hand cover the receiver.

He’s crying, a thousand miles away.

“We have good support here. We’re going to the doctor this afternoon. If you want to help your mother, get your funding and build your chair.”

She doesn’t want to tell him, but the chair is still years away.

Light-years away. It’s a dream, a mirage.

Her eyes fill with tears. “You know I’m doing this for her.”

For a moment, they’re both quiet, trying to cry without the other knowing, and failing miserably. She wants nothing more than to tell him it’s going to happen, but that would be a lie.

“I’m going to call when I get home tonight,” she says.

“Please tell Mom I love her.”

“I will. But she already knows.”

Four hours later, deep in the neuroscience building in Palo Alto, Helena is examining the image of a mouse’s memory of being afraid—fluorescently illuminated neurons interconnected by a spiderweb of synapses—when the stranger appears in her office doorway. She looks over the top of her monitor at a man dressed in chinos and a white T-shirt, with a smile several shades too bright.

“I’m Jee-woon Chercover. Do you have a minute to speak with me?”

“This is a secure lab. You’re not supposed to be down here.”

“I apologize for the intrusion, but I think you’ll want to hear what I have to say.”

She could ask him to leave, or call security. But he doesn’t look threatening.

“OK,” she says, and it suddenly dawns on her that this man is bearing witness to the hoarder’s dream that is her office—windowless, cramped, painted-over cinder-block walls, everything only made more claustrophobic by the bankers’ boxes stacked three feet high and two deep around her desk, filled with thousands of abstracts and articles. “Sorry about the mess. Let me get you a chair.”

Jee-woon drags a folding chair over and takes a seat across from her, his eyes passing over the walls, which are nearly covered in high-resolution images of mouse memories and the neuronal firings of dementia and Alzheimer’s patients.

“My employer is very taken with the memory portraiture article you published in Neuron.”

“Does your employer have a name?”

“How this conversation goes.”

“Why would I even have a conversation with someone when I don’t know who they’re speaking for?”

“Because your Stanford money runs out in six weeks.”

She raises an eyebrow.

He says, “My boss pays me very well to know everything about the people he finds interesting.”

“You do realize what you just said is totally creepy, right?”

Reaching into his leather satchel, Jee-woon takes out a document in a navy binder.

“Of course!” she says. “You’re with Mountainside Capital!”

“No. And they’re not going to fund you.”

“Then how did you get that?”

“It doesn’t matter. No one is going to fund you.”

“Because this?” He tosses her grant proposal onto the wreckage of her desk. “Is timid. It’s just more of what you’ve been doing at Stanford the last three years. It’s not big-idea enough. You’re thirtyeight years old, which is like ninety in academia. One morning in the not-too-distant future, you’re going to wake up and realize your best days are behind you. That you wasted—”

“I think you should leave.”

“I don’t mean to insult you. If you don’t mind my saying, your problem is that you’re afraid to ask for what you really want.” It occurs to her that, for some reason, this stranger is trolling her. She knows she shouldn’t continue to engage, but she can’t help herself.

“And why am I afraid to ask for what I really want?”

“Because what you really want is bank-breaking. You don’t need seven figures. You need nine. Maybe ten. You need a team of coders to help you design an algorithm for complex memory cataloging and projection. The infrastructure for human trials.”

She stares at him across the desk. “I never mentioned human trials in that proposal.”

“What if I were to tell you that we will give you anything you ask for? No-limit funding. Would you be interested?”

Her heart is beating faster and faster.

Is this how it happens?

She thinks of the fifty-million-dollar chair she has dreamed of building since her mom started to forget life. Strangely, she never imagines it fully rendered, only as the technical drawings in the utility patent application she will one day file, entitled Immersive Platform for Projection of Long-Term, Explicit, Episodic Memories.

“If I say yes, will you tell me who your boss is?”

As her jaw hits the desk, Jee-woon pulls another document out of his satchel and passes it to her over the bankers’ boxes.

“An employment and confidentiality agreement. Nonnegotiable. I think you’ll find the financial terms to be very generous.”

From RECURSION. Used with the permission of the publisher, Crown. Copyright © 2019 by Blake Crouch. 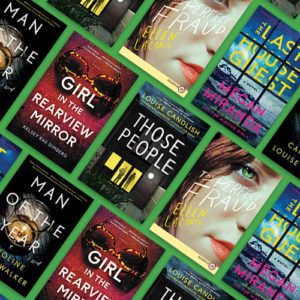 June's Best Psychological Thrillers June’s psychological thrillers include three stellar debuts—Man of the Year, The Girl in the Rearview Mirror, and The Perfect...
© LitHub
Back to top