He leaned forward, a hand on my arm, the dark shadows under his eyes accentuating their piercing blue, and said in a heavy Pepe Le Peu French accent, “You are the woman I have been looking for. The only woman for me, my very own Irene Adler.” I was twenty-five at the time, a Sherlock Holmes fanatic, and I had been waiting for someone to say those words for my entire life.

My romantic obsession with books started young, I think my mother gave me The Three Musketeers during a particularly bad round of bronchitis when I was nine, and once the dashing D’Artagnan swaggered into my life, I knew my only heroes would be fictional and I subsequently fell in love with the main character of almost every book I read. The classics were my delight, I loved corsets and hansom cabs, stories of honor and romance where all the heroines were virgins like myself and everyone either paired up in the end or died. While my peers hung posters of Leonardo DiCaprio or the Backstreet Boys, I daydreamed about Mr. Darcy and Daniel Deronda, and Raskolnikov, brushing my hair with a boar bristle brush and reading by candlelight late into the night.  But the one who stood above all others was Sherlock Holmes. Tall, dark, thin, brilliant, antisocial, vain, self-destructive—he was everything my teen heart wanted in a man, and increasingly everything I wanted to be myself, and I lost whole evenings to imagining the most lurid romantic fantasies.

From my vantage point behind big glasses and prim, almost Victorian blouses, I watched the flesh and blood boys of my high school, and they seemed like aliens—loud, rough, flatulent, speaking a language of sports and rock music that I had no connection to, and maybe most importantly, showing no interest in me. But it didn’t matter because I could always read stories of my one true love, secure in the knowledge that he would appreciate me. Every Sunday night, I watched Mystery on PBS, a date with Holmes and Watson cherished and anticipated all week. I bought annotated volumes and academic studies. I have a picture of myself from a trip to England standing outside of 221b Baker Street with the panicked expression of an adolescent unable to process such elation. My other, childish, crushes faded away and all that was left was Sherlock Holmes.

I went to college and my odd and romantic tendencies only hardened. In every dorm room I lived in, I scrawled the word “Rache” in my own blood across the wall, the famous clue from Holmes first case, “A Study in Scarlet”, just waiting for the moment when someone, hopefully a handsome young man would walk in and recognize it, receive my hidden signal—and I would have at last found a soulmate. Suffice to say no one did, and the few boys I brought home for drunken fumblings probably thought it strange, but not enough to dissuade them from their hormonal urgings and the vaguely willing female before them.

Article continues after advertisement
“But he isn’t real,” my friends would argue, and I found it hard to articulate that actually the books that I read seemed more real, more vibrant, more connected to my emotional life than the world around me.

“But he isn’t real,” my friends would argue, and I found it hard to articulate that actually the books that I read seemed more real, more vibrant, more connected to my emotional life than the world around me. The novels I read were my whole life, and I wept, and thrilled to and lusted for those characters who filled my mind and kept me company, an otherwise, painfully shy, socially inept, dreamy young woman. I dated a few men here and there, but my heart remained untouched. No one was worthy. I knew there were others who felt as I did—Sherlock Holmes has a large and passionate following of fan clubs and appreciation societies, but I didn’t know how to find them and was too embarrassed to try. He was my love, and I blushed to say his name out loud.

And then, after graduation, I was working in a grand, old, fancy Manhattan private club, mostly because it looked so much like the kind of places in the books I loved to read, and I heard by some impossible coincidence that the Baker Street Irregulars, the world’s most famous, most prestigious, most devoted Sherlock Holmes fan club was having a cocktail party downstairs. I couldn’t let the opportunity pass me by, with my heart in my throat, I snuck into their party. I was the youngest person there by twenty years at least and within two hours, a member of a distinguished European Sherlock Holmes society had singled me out and was backing me into a corner, his voice rising in with excitement as he brought up Holmes’ particular connections to the continent. “His mother’s sister was the French painter Vernet,” I proudly interrupted him, and his eyes lit up. “What knowledge of the canon you have!”

Oh this unbelievable man! His salt and pepper hair crested back from a widows peak and he smelled deliciously of some old fashioned cologne—vetiver or bay rum—like expensive sheets and masculine sophistication. All the boys I had known smelled of Tide and Irish Spring. He showed me pictures of himself in a deerstalker cap. He made yearly pilgrimages to Reichenbach Falls, infamous site of Holmes’ near death fall and even more wonderful, he did it in full Victorian costume. I told him about the chest of antique corsets and petticoats I kept under my bed. He told me he had made a full, accurate recreation of Homes’ study in his house, I told him about the “Rache” on my wall. He was only in New York for the weekend, to attend the Baker Street Irregulars annual banquet, but he had to see me again. And then he said the words that made me feel like everything in my life had been moving towards this one moment. “You are my very own Irene Adler, there was only one woman for Holmes and you are clearly the only woman for me.” All my past fantasies lined up with the real flesh and blood man standing in front of me, like focusing the two side of an old fashion stereopticon and all my waiting had been worth it and I agreed to meet him the next night.

All the next day, I was in a fever of anticipation. I curled my hair, I found my most Victorian dress, I then drank a few too many cocktails waiting in the bar for him to arrive. When he did, to my surprised delight he was wearing a white tie and tails, the uniform of every ball I had ever read about but something I had never seen in real life. I couldn’t believe when he took me by the arm that I was finally getting to press up against that perfect elegance. If I squinted, he must have looked exactly like Holmes, on his way to a violin recital. I positively floated on romantic bliss and whiskey sours.

That cloud evaporated when he climbed on top of me a few hours later. With his tails crumpled on the floor, he became a stranger. He kept referring to me as “Irene Adler” and all of his pale, clammy, Frenchness suddenly made me long for all those American boys who I thought hadn’t understood my deepest feelings, but who now seemed to share something more indistinct but much more important. I was brutally confronted with the reality of a much older, naked man about whom I knew almost nothing except his favorite book. I had thought that was the measure of everything, and all at once it didn’t seem like enough. I squirmed out from underneath him as soon as etiquette seemed to allow and quickly left.

Against all possible odds, I had found that man who knew the secret to the “Rache” on my wall, but my stomach felt cold and hard at the thought.

I was heartbroken, but I found I still didn’t want to let go of the hope that this could somehow be what I wanted. I had wanted it for so long. When I told my friends, no one could believe the story. “You found the perfect guy for you,” and I agreed. Against all possible odds, I had found that man who knew the secret to the “Rache” on my wall, but my stomach felt cold and hard at the thought. He went back to France and sent me long passionate emails. He was going to come back. He was going to move across the ocean and marry me—the girl of his dreams. They were often addressed to “Irene” and I found I didn’t like it quite so much. He sent pictures of his living room, the one he had transformed to mimic Holmes study, and it looked shabby and cluttered and had strange homemade mannequins posed in it that kind of looked like dead bodies. I started to have reservations. I slowly began to put aside the books I had loved so much and started trying to read new fiction, pleasantly surprised at how much there was in it to relish and identify with. Eventually I stopped responding to the emails. I scrubbed the coagulated writing from my wall where it left only a faint brown stain. I let friends set me up and I asked the men I went out with about their lives and thoughts. Sometimes I found unexpected points of connection. I was still shy, and still liked to daydream but I began, tentatively to test out the waters of the real world, one that always seemed so alien and threatening.

A few months later I met the man who would eventually become my husband. He laughed when he saw the Edison bulbs and lithographs, and vases of ostrich feathers in my apartment. He is a political scientist and studies statistics, lives life in the cool, clear light of practicality, but he loves Dostoyevsky, and he loves me when I wake up in the mornings and would never want to think I were someone else. But still, sometimes when we are watching a new episode of Sherlock, he’ll kind of look over at me and smile because he knows and he remembers and I can’t help but smile back.

Iris Martin Cohen grew up in the French Quarter of New Orleans. She holds an MFA from Columbia University and studied Creative Nonfiction at the Graduate Center, CUNY. She currently lives in Brooklyn. The Little Clan is her first novel. 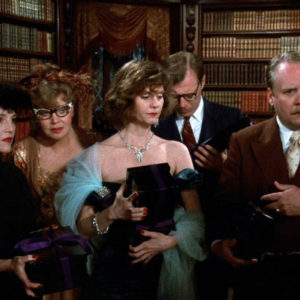 Like many mystery-obsessed children, my first experience with child sleuths wasn’t Nancy Drew, Harriet the Spy, or the Hardy...
© LitHub
Back to top