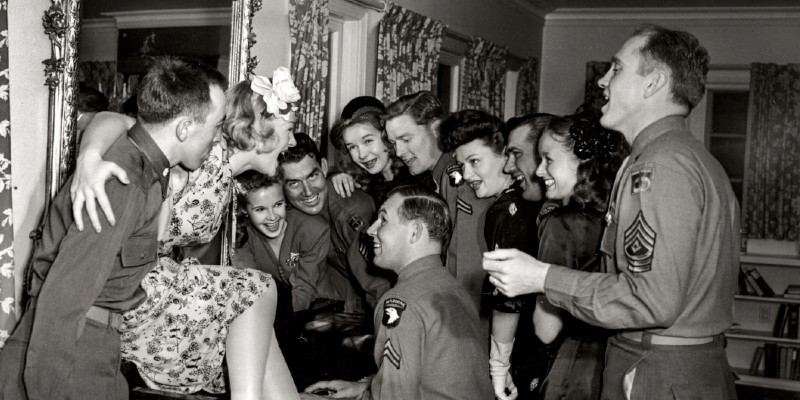 The Hollywood canteen was where soldiers went to dance and everyone was equal. That was the story, anyway.

“Democracy! That’s what it means, Slim! Everybody equal. Like tonight! All them big shots, listening to little shots like me, and being friendly!”

In The Hollywood Spy, Maggie Hope travels from London to Los Angeles during the summer of 1943, with the United States at war. Maggie’s there to solve a murder, of course, staying as a guest of her friend Sarah, a ballerina starring in the Gold Brothers’ Star-Spangled Canteen—a fictionalized version of the actual Warner Bros. film, Hollywood Canteen.

So what was the Hollywood Canteen? Well, the real Canteen was a social club for Allied servicemen, founded by John Garfield, Bette Davis, and Jules C. Stein on October 3, 1942. It offered food, non-alcoholic beverages, dancing, and entertainment to soldiers and sailors on their way to or coming back from overseas. It was, at least in name, racially integrated. A press release about the Canteen stated: “military men and women regardless of race or creed, wearing the uniform of any one of the United Nations, will be admitted to the Canteen.” The movie made about the real-life Canteen, Hollywood Canteen, is a 1944 American romantic comedy with musical set pieces, starring Joan Leslie, Robert Hutton, and Dane Clark.

In The Hollywood Spy, Sarah and her colleagues work on Star-Spangled Canteen, a film, like the real Hollywood Canteen, about a club for Allied soldiers, which is supposed to give the illusion of “a country pulling together on the dance floor of the nation.” While solving the murder however, Maggie sees something quite different. She witnessed a country beset by racial unrest and riots, the threat of the KKK, and underground pro-Nazi factions still determined, even after the attack on Pearl Harbor, to undermine the war effort.

While writing The Hollywood Spy, these contradictions between what was really going on in Los Angeles—as opposed to the official version—opened a window into bigger questions of race, gender, nostalgia, and national memory of the American Homefront in World War II. This was, after all, a country that was united in fighting fascism—but with a segregated army, a segregated Red Cross blood supply, and legally mandatory segregation in many states. Congress was unable to pass an anti-lynching bill, President Roosevelt had to force the defense industry had to hire nonwhite workers during a labor shortage, and his administration rounded up and interned people of Japanese descent in camps. The U.S., especially in the summer of 1943, was a nation dealing with racial strife, with riots in Los Angeles, Detroit, New York, Texas, and Georgia. Los Angeles in particular was wracked with the violence of the Zoot Suit Riots, where white sailors in uniform attacked young people in Zoot suits, primarily Mexican-Americans, but also Blacks and Filipino-Americans.

Because while the war was shown to be “over there,” Americans were always depicted (at least at the movies) to be “pulling together.” The U.S. government needed Americans to be unified to fight the enemy, and also in the factories to produce the supplies of war. In fact, a department of propaganda made sure all wartime films showed Americans of all races, colors, genders, and creeds happily working together—for those at home watching, but also for enemies in Germany, who would jump on any instances of racism in U.S. films to call out its hypocrisy.

To complicate things, as I began to delve further into research, it became clear that the “official” version of how Los Angeles was (un)segregated was different from the reality. The book Dance Floor Democracy: The Social Geography of Memory at the Hollywood Canteen by Sherrie Tucker, published by Duke University Press, presented first-person accounts of what really happened on that fabled dance floor.

Yes, the film Hollywood Canteen presents a unified and even multicultural country (although people of color are really only seen in the background, much like scenery). But the reality was different. According to those interviewed in Dance Floor Democracy, Black soldiers were only allowed to dance with Black hostesses. And sometimes there were no Black hostesses to dance with—and so they couldn’t dance at all.

Who could dance and with whom became a burning issue. Canteen board members fought over if people could dance across racial lines. When challenged by members and volunteers against integration, Bette Davis and John Garfield, along with the of the Los Angeles musicians’ unions, threatened to pull their support—and the color line was broken, at least in theory. Stories about these civil rights battles appeared in the national Black press; the Chicago Defender called it a place where “the sepia boy in uniform is as welcome as the fairest Caucasian, and where sepia hostesses dance with both nationalities.”

But in Dance Floor Democracy, we hear from the people who were actually there. White former Canteen-goers remember it as integrated and friendly. In their memories, it was a “wonderful” place where “everyone was together” and “there was no prejudice.” However, when asked if they had ever danced with a person of a race other than their own, or seen people of other races dancing, many replied “I don’t remember… but I’m absolutely sure it was integrated. I would have noticed if it wasn’t.” One white man is quoted as saying, “Those problems hadn’t started yet.”

Canteen-goers of color interviewed in the book tell of a segregated or at least partially segregated environment. Mel Bryant, an African-American veteran, is quoted as saying, “Don’t you believe it” about desegregation. He added that it was “a different thing, a wonderful thing to have a place where soldiers could go, but it wasn’t integrated in an equal way.”

In The Hollywood Spy I used these contradictory stories to write a valentine to the United States Homefront during World War II. Not as we see it portrayed simplistically in movies, but with complexity, diversity, and nuance—a challenge, made with love and respect, to our accepted collective nostalgic memory. 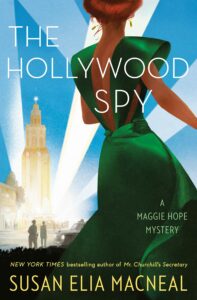 Susan Elia MacNeal is the New York Times bestselling author of the Maggie Hope mysteries. Her latest in the series, The Hollywood Spy, is now available. MacNeal won the Barry Award and has been nominated for the Edgar, Macavity, Agatha, Left Coast Crime, Dilys, and ITW Thriller awards. She lives in Brooklyn, New York, with her husband and son. 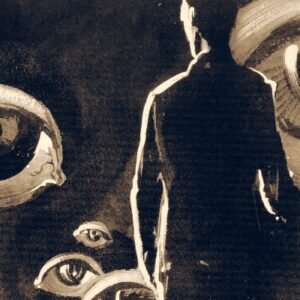 The mind is the locus around which everything revolves in a psychological thriller or mystery. These stories are often tales...
© LitHub
Back to top