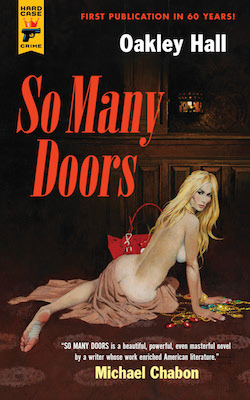 The following is an exclusive excerpt from So Many Doors, by mid-century dean of the California writing scene Oakley Hall, best known for his cult classic western Warlock. In the following passage, we encounter two friends in a lumber camp as they compete over women.

He had not liked Jack at first. He had already been in the CCC almost a year when Jack joined. Jack had been immediately accepted into the circle of oldtimers, like Ralph Mogle and Campanelli, from which Ben was still excluded. But they had been in the same tent once, when they were up in the mountains fighting a fire. Ben had brought a stack of Fighting Aces magazines with him and Jack borrowed them to read at night. They were both still in their teens then and they talked together about the airplane fighting in the late war, about Eddie Rickenbacker and Raoul Lufberry and von Richthofen’s Flying Circus, and Jack bragged a little about how Mogle was teaching him to run the bulldozer.

They were camped in their squad tents in a little high valley, the tents lined up in three rows behind a stone cabin, over the door of which hung a sign that said “U. S. Forest Service.” The cabin stood at one end of a rumbling wooden bridge and all along the road and up the sides of the mountain the trees were burned. A few had fallen but most of them still stood upright, without branches, like tall, charred poles. The underbrush was burned into a low tangled black carpet, and soot hung heavily in the air.

Ben walked slowly along the road with his shovel over his shoulder looking for smouldering wood. When he found any he broke it up with the shovel and smothered it with dirt—sometimes a fallen log would smoulder for days before it blazed up. He was hot, dirty, and tired, and the soot in the air itched on his sweating skin, around his collar and under his belt. He had walked the mile up and down the road above the foresters’ shack three times since lunch, and he had buried all the embers he could find. Here and there on the slope above the road a tree was still burning but these had been isolated, the underbrush cleared away in a wide circle around them.

As he rounded a bend in the road, Ben came upon Jack sitting on a charred gasoline can, scraping his shovel back and forth across the soot-covered surface of the road. “Hi, Ben,” he called.

“Hi,” Ben replied, squatting beside him and bracing himself on his shovel. Jack was smoking, holding the cigarette cupped in his hand. “How’s it going?” Ben asked.

Jack rolled his eyes and groaned. “Oh, Christ, I’m shot. This gets old after a while.”

Ben grinned, wiping his hands one after the other on his pants’ legs. “When do you suppose we’re going to haul out of here?” he asked.

He was hot, dirty, and tired, and the soot in the air itched on his sweating skin, around his collar and under his belt.

“Beats hell out of me. We pull out of here it’s just to go out on another one. Big bastard going up by Yosemite, I hear.”

“Yeah, I heard that too,” Ben said. When they were silent, everything was silent; it was necessary to listen to hear the distant clink of shovels and from somewhere up on the mountain, the steady cough of Mogle’s bulldozer.

Jack finished his cigarette, snubbed it on his shoe, shredded the butt and threw the paper over his shoulder. He jerked his head toward the sound of the dozer. “Boy, that’s the life,” he said. “That’s a white man’s job. To hell with this rooting around with a shovel.”

“Yeah,” Ben said. He sat down on the ground, straightened his leg out and rubbed the knee. It still got sore if he walked too much. Through the damp, taut cloth that covered the inside of his knee, he could feel the long, jagged, tucked and bunched scar. He ran his fingers gently along its length.

“You should have come up with me this morning,” Jack said. “He would have let you run it.”

Jack glanced at him quickly and grinned. “Yeah,” he said. “I know what you mean. He’s the greatest cat skinner and woman skinner there ever was. Just let him get started telling you about it, unh?”

Jack frowned. “Sure,” he said finally. “He gripes me too, but what the hell, it’s a good chance to learn to run a dozer. That bastard Campanelli wouldn’t ever let anybody run his.”

“I don’t want to swing this God damn thing the rest of my life,” Jack said. He pushed himself up with the help of his shovel, scratched his chest and stretched, yawning. “Hell,” he said. “Let’s get at it again, unh?”

Ben nodded and rose, still massaging his knee with his hand. “You got a gal at home?” he asked, as they walked up the hill together.

Jack shook his head. “Nope. Women give me a pain.” He screwed up his face and swung his shovel like a baseball bat at a charred bush. “You?” he said.

“Well, kind of,” Ben said. “You know. We write all the time, but what’re you supposed to do about it? Can’t get married.”

“To hell with getting married,” Jack said. “To hell with that. Slip it to her till you get sick of it, then check out.”

Ben halted abruptly. He felt the blood rush to his face. “I said she’s not, goddamnit!”

“You been talking to Mogle too much,” Ben said as they walked on, but he wasn’t angry anymore. He liked Jack, and he knew Jack liked him, and somehow, that day, they began to be friends. The next fall when Campanelli left the camp, Jack was assigned to his dozer. Jack began giving Ben lessons, and when Mogle quit to get married, Ben and Jack were the two bulldozer men, and as such had an important place in the CCC camp. Then, in March, Jack’s mother died of cancer, and Jack asked Ben if he would come to Lodi to the funeral. “I don’t think many people’re going to be there,” he said embarrassedly, without looking at Ben. “I’d kind of like to have you come along with me. If you’d want to.”

So Ben got permission to go to Lodi with Jack. At the funeral were several old people, and Jack’s brother Sterling, a pimply faced Marine several years older than Jack, in blues and a swaybacked barracks cap. Afterward Ben and Jack and Sterling went out to get drunk, and the next day Jack and Ster sold Mrs. Ward’s lunch wagon for seven hundred dollars, split the money ceremoniously and Ster took the train back to San Francisco.

That night Jack suggested they go to a hotel, have call girls sent up, his treat, and have a party.

That night Jack suggested they go to a hotel, have call girls sent up, his treat, and have a party. At first Ben hadn’t wanted to. He was ashamed for anyone to see his scarred leg and he had never been with a woman, but then he thought he might as well get it over with. So Jack bought a bottle of bourbon, rented two rooms in a shabby hotel with cracked yellow paper on the walls, and they had their party.

Ben got drunk as quickly as he could and he didn’t remember what his girl looked like, except that she had frizzy, ginger-colored hair and white shaved legs, and once in the night when he woke up he had smelled her breath and it almost made him sick. In the morning when she left he pretended to be asleep.

They had only been back at the CCC camp a short time when they heard about the Public Works jobs in Bakersfield. They left and took a room there together. Jack was hired to operate the bulldozer that pushed the carryalls scraping in the cut, Ben as a grease-monkey, and after a month or two the grade foreman had Ben take over the cat and tampers.

When the job was finished they moved up the valley to Visalia for a while, then to Fresno, then Porterville, and back to Bakersfield again. In Bakersfield they lived in a run-down apartment house near the railroad yards. They were both just twenty-two then, and they talked a lot about what they had done and what they wanted to do, making a bargain that they would shut up and go to sleep when they heard the long, keening rattle of the milk train in the yards.

For a while Ben was jealous of Jack; not because Jack was the better cat skinner, but because Jack was more successful with the girls they knew. Jack was tall, well-built, and, Ben supposed, handsome in a way. He had a hard, flip, confident manner with women, while Ben was quieter; and he was shorter and thinner than Jack, with thin brown hair and jug ears. After a while Jack settled down a little and did not brag so much about his conquests. It was then that he and Ben began to accept each other fully.

Then V turned up. That was in the early summer of 1938. One night when Ben came home from the state highway job, she was alone in the room, sitting on the edge of Jack’s bed and looking very young and forlorn. Instantly Ben was sorry for her.

From SO MANY DOORS, by Oakley Hall. Used with the permission of the publisher, Hard Case Crime. Copyright © 2018 by the Estate of Oakley Hall. 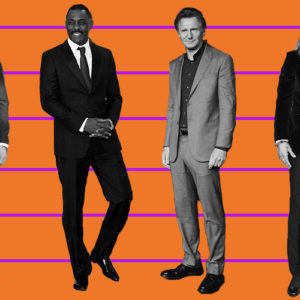 Who Should Play Jack Reacher Now that Tom Cruise Is Out? While Tom Cruise has courted controversy for much of his life, he's never provoked quite so much outrage as when he agreed...
© LitHub
Back to top