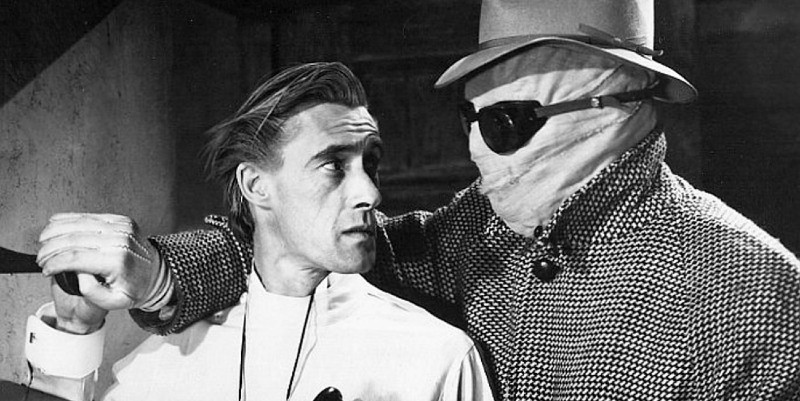 I grew up in a haunted house.

It was a plain red brick 1890s farmhouse with 12-foot ceilings, an attic I never went into, and a basement that the family from “Texas Chainsaw Massacre” would have loved, complete with floor drain.

We would hear pounding in the walls and overnight guests told us they’d been visited by friendly, inquisitive figures who opened their bedroom doors to peer in.

Well, the mysterious figures were usually friendly: To this day, one of my cousins who stayed overnight is certain she saw an old woman standing over her bed, brandishing a knife. She closed her eyes, sure she was dreaming. When she opened them, the old woman was still there. My cousin closed her eyes again and didn’t open them until morning.

I feel like I had no choice but to grow up spooky.

It wasn’t just the house, although an old, haunted farmhouse in the countryside certainly lends itself to fearsome pursuits.

No, my lifelong interest in the mysterious, the cursed, the haunted and the horrific is due in large part to the timing of my birth.

A couple of years before I was born, the classic 1930s and 1940s Universal horror films were sold to TV stations around the country in the so-called “Shock” syndicated package. “Dracula,” “Frankenstein,” “Murders in the Rue Morgue,” “The Invisible Man.” They were all there, or in the “Son of Shock” package to follow.

Suddenly, movies that had only been seen in theaters – in rare re-releases – for two or three decades were there for audiences old and new through television. Most stations packaged them as “Shock Theater” or “Nightmare Theater,” the latter a late-night double feature hosted by Sammy Terry, a genial ghoul played for Indiana viewers by Bob Carter, a mild-mannered musical instrument salesman by day who terrified us late at night each weekend.

When I was finally old enough to watch Sammy Terry, ensconced as I was deep in the couch in my haunted house, I supplemented my viewing by reading everything I could get my hands on. The 1960s and 1970s saw a huge boom in nostalgia for the 1930s and 1940s. The Marx Brothers’ films were fixtures on college campuses, as were old serials based on Flash Gordon and Batman. The “Lord of the Rings” books were reprinted in paperbacks that seemed to be on everyone’s shelves.

I devoured it all.

Along with my horror movie obsession and “Star Trek” obsession came a fascination with everything mysterious and frightening and, well, spooky.

Published in 1966, “Tales to Tremble By” – followed by “More Tales to Tremble By” and “Tales of Time and Space” – fed us spooky junkies macabre reading matter through short story collections published by Whitman. From the second book: “God Grante That She Lye Stille,” a 1947 story by Cynthia Asquith that takes its title from a gravestone.

Sure, Whitman published books based on “Star Trek” and “Mission: Impossible” and “Ironside” – 1960s kids loved a good story about a gruff police commissioner in a wheelchair – but the vintage writing in the creepy “Tales to Tremble By” collections, in stories published from the early 1900s to mid-century, prepared me for the ultimate timeless writings about the mysterious and the macabre: the adventures of the world’s foremost consulting detective. 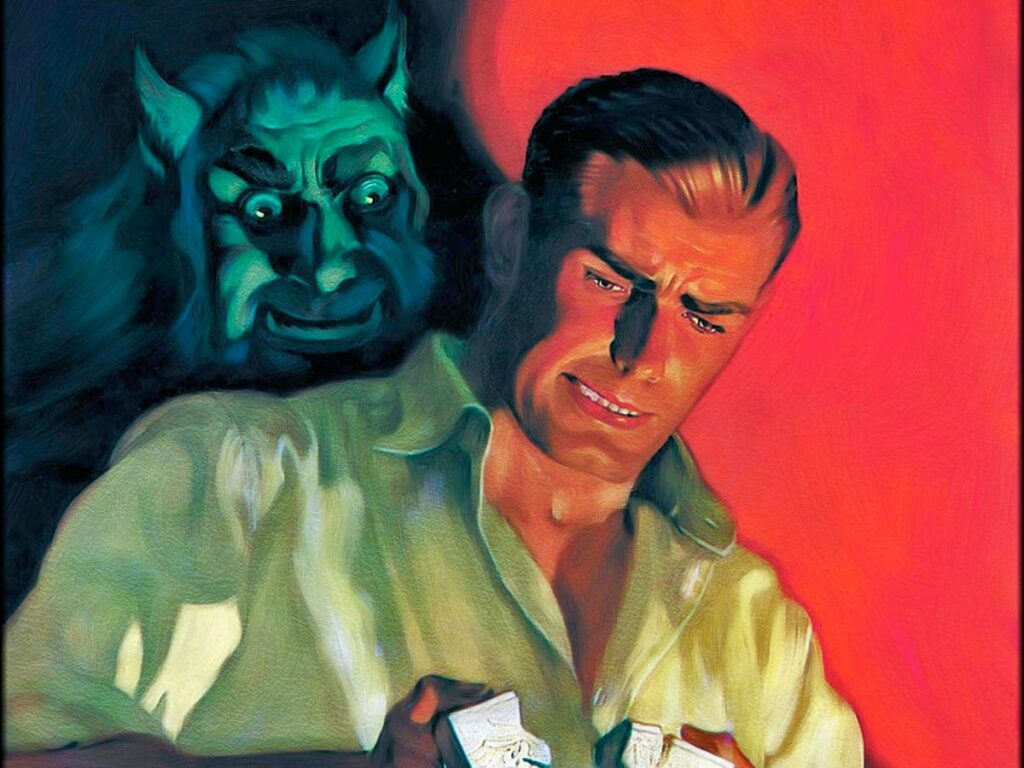 Throwback to the great crimefighters

“The Hound of the Baskervilles” had been published by Arthur Conan Doyle in 1902 and entire chapters go by without a glimpse of Sherlock Holmes. But I’d argue that the 1968 Whitman edition of the story, with cover art depicting a fearsome black dog with yellow eyes and a gaping red mouth, gave half the kids who saw it nightmares and made the other half avid readers of Holmes stories and the detective genre.

It’s hard to imagine now, but in the 1960s and 1970s we found ourselves – and by “we” I mean the geeks and nerds, including many who were smarter and better students than I was – immersed in tales from decades before we were born. In this instance, they were tales of murder, fake beards and moors. (Moors ranked right up there with quicksand as threats that seemed much more likely to us back in those days.)

Besides making me long to live in fog-shrouded London, Conan Doyle’s writing was a gateway drug that led to Poe and Derleth and Lovecraft, with his indescribable horrors with tendrils and gaping maws.

From there, even the least athletic of us bookworms could make the jump to other classic tales. And there must have been a market for them. You couldn’t glance at a shelf of paperbacks without finding Robert E. Howard’s Conan, Edgar Rice Burroughs’ Tarzan or Doc Savage.

Clark Savage Jr., created by the Street & Smith publishing house in 1933 in tales often written by Lester Dent, was created to be an action-intensive, super-science crimebuster like The Shadow. Whereas The Shadow dealt death to evildoers with his blazing automatic weapons, Doc Savage was more benign, arresting master criminals and performing brain surgery on them to remove the part of the brain that made them inclined to go criming. This was not seen as problematic back then, apparently.

The tales of Doc Savage and The Shadow, which originated in the pulp magazines of the 1930s, somewhat inexplicably caught on with readers three and four decades later.

None of the reborn superheroes could compete for popularity with Doc Savage, whose adventures were reprinted in a series of paperbacks beginning in the 1960s. Bantam Books published the old pulp tales with new covers by artist James Bama, whose paintings depicted the superhuman Doc Savage with torn shirts and rippling muscles.

Bama, a New York artist who painted in a photorealistic style, would contribute key art to three of the geek world’s 1960s touchstones, including the most ghoulish hobby we enjoyed back then. 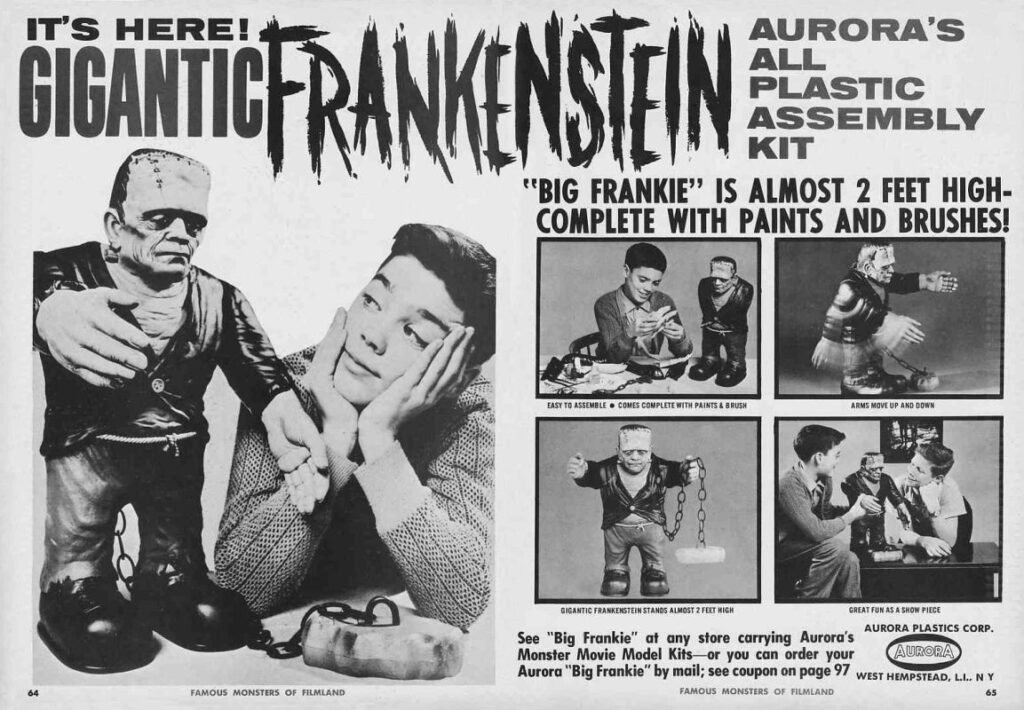 At some point I asked permission to paint the walls of my room black. I’d like to say it was some kind of goth thing but I think it was just that black made a good background for dozens of movie posters and pages from comic books and monster magazines I posted.

My room was now territory for ghosts and ghouls real and reel.

And the black walls made an especially suitable background for a shelf full of monster model kits.

In the early 1960s, the monster movie craze was still building, The Shock movie package made kids – mostly boys, of course – hungry for anything monster-related: Halloween costumes, goofy TV shows like “The Munsters,” cartoons, monster magazines and model kits.

A few years before his covers for Doc Savage paperbacks, James Bama – whose beautiful lifelike painting of the Enterprise crew would be used in 1966 as key publicity art for “Star Trek” – was hired to paint illustrations for model kits from Aurora Plastics Corporation.

Aurora had since the 1950s been a maker of plastic model kits, usually the wholesome variety of kits popular with accomplished hobbyists and fumble-fingered kids: cars, ships, etc.

But Aurora was going to cash in on the monster movie craze by releasing a series of ghoulish figures that monster kids could assemble. The first, a figure of Frankenstein’s monster, came out in 1962. It was followed by the Wolfman, the Mummy, the Creature from the Black Lagoon and other Universal monsters. By the early 1970s, Aurora delighted some kids and horrified some parents by providing glue-and-paint model kits of torture dungeons.

James Bama was tapped to paint the covers for the model boxes. By the time Bama gave up the commercial art world in the early 1970s to focus on art of indigenous peoples and the American west, he had hit the geek trifecta: Doc Savage, monster model kits and “Star Trek.”

Bama even contributed to Famous Monsters of Filmland magazine – including the cover of its 1965 yearbook – but the artist with the greatest influence on the imagination of young monster fans was Basil Gogos, whose vivid color covers for Famous Monsters fired our imaginations, just as the magazine did.

Famous Monsters – or FM, as we called it – was a magazine created in 1958, virtually the dawn of the Shock theater age, published by magazine industry figure James Warren and edited by Forrest Ackerman, a longtime science fiction industry publishing figure who was friends with and agent for some of the biggest names in macabre fiction. He is credited with having invented the term “sci-fi.”

Ackerman was also a collector, of movie-used props and models as well as posters and publicity photos. The paper goods meant that he could produce hundreds of issues of FM for Warren, filling the inside with groan-inducing writing and never-before-seen images. FM inspired a generation of creative types like Steven Spielberg and Stephen King.

The magazine’s painted covers, often by Gogos, were as beautiful as they were not subtle. Like comic books, they were a vividly colored beacon to some parents.

My parents did not throw away my FMs and comic books. I mostly wore them out, reading and rereading them. And yes, sadly I took some of them apart to post those great Gogos works of art on my walls. 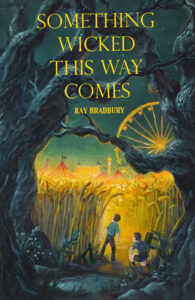 Echoes of a spooky youth

As I got older, my tastes changed and moved more toward the mysterious end of things and slightly further away from the horrific. For every book that I read like William Peter Blatty’s 1971 classic “The Exorcist,” I probably read two crime novels. Robert B. Parker’s Spenser series kicked off in 1973 with “The Godwulf Manuscript” and never let loose its grip on the “hardboiled but humorous” genre for nearly two decades. I still vividly recall reading, as an adult, 1985’s “A Catskill Eagle” and marveling at Parker’s talent.

Parker’s books and all the rising crime writers began to take a place on my shelves along with Conan Doyle and Ray Bradbury, whose stories and novels like 1962’s “Something Wicked This Way Comes” looked at the human condition in a way that was as questioning as any of the great detectives – but with more poetry.

I don’t want anyone to think that my tastes went entirely “straight” as I reached my geeky teenage years. Stephen King’s “Carrie” in 1974 seemed as revolutionary as anything I’d ever read, even aside from its form of compiled clippings. The next year, his “’Salem’s Lot” earned my vote as scariest novel ever and his 1978 “The Stand” was the first big book – in sense of volume and ideas – I read in college.

I’ve got more versions of Bram Stoker’s “Dracula” than I can count and to this day, my 1963 paperback of Robert Bloch’s “Psycho” fills a space at one end of a shelf on the big, ugly homemade bookshelf I rescued from the house where I grew up. Thanks to the forbearance of my wife, the shelves are still in use.

That bookshelf and the books on it and other scattered throughout our house are the remains of my spooky youth. Echoes of that youth, or ghosts maybe.

I sometimes wonder if the current owners of the house where I grew up found any pieces of my old monster model kits, deep in some closet. Or the random Sherlock Holmes bookmark or page torn from Famous Monsters that literally slipped between the cracks.

And I wonder if they ever hear pounding in the walls. 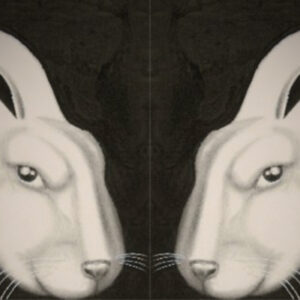 How do you begin writing a book? In the case of my debut collection of fiction, you walk out onto your front lawn in the midst...
© LitHub
Back to top