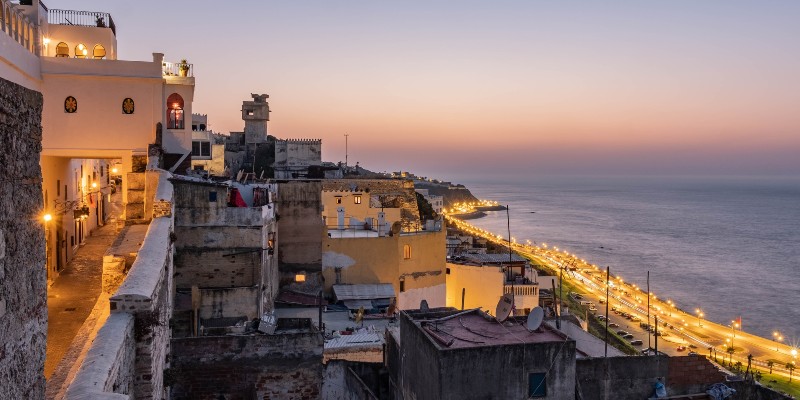 Crime and the City visits Morocco's northern port, where there's a long legacy of art and intrigue.

Crime and the City has been to Morocco before. Then we talked mostly about the crime writing coming out of, or set round about, the capital Rabat and the cities of Marrakech, Fez and Casablanca. We only briefly mentioned Tangier. But Tangier is a very special place, both within Morocco and also internationally. It sits in a key location—on the Maghreb coast of North Africa, at the western end of the Straits of Gibraltar, facing Spain and just about where the Mediterranean meets the Atlantic. This unique location gave Tangier its unique history. From 1923 to the mid-1950s Tangier was an international city, controlled by foreign colonial powers, a port gateway between Europe and the vast continent of Africa. The ‘International Zone’ attracted diplomats and businessmen as much as spies, gangsters and adventurers. It was also a haven and destination for the creative, writers included (Jean Genet, Tennessee Williams, Allen Ginsberg, William Burroughs…), and they often captured the specific international milieu of Tangier.

No one of course more famously than the American most associated with North Africa, Paul Bowles. Let It Come Down (1952) is set in the International Zone where American Nelson Dyer attempts to start a new life. Taking its name from Macbeth, the novel details Dyer’s misadventures, which lead him down a path of self-destruction, prostitutes and drugs. It’s perhaps the Bowles novel closest to a crime novel—it is certainly noir (everything is ultimately futile while dark impulses rise to the surface) and captures the deracinated nature of a cosmopolitan, colonial Tangier that is both at once part of Morocco and separate. It is also full of descriptions of Tangier at that time—a city Bowles first visited in 1931 on Gertrude Stein’s advice, though only settled there full time (with his fellow writer and wife Jane) in 1947. Like many others in Tangier’s growing expatriate population Bowles loved the old Medina. He wrote of that specific time:

‘During the international years the dramatic, extra-legal facets of the city’s character were much publicized, and Tangier was thought of as a place where every fourth person was a smuggler, a spy or a refugee from justice….’

And so the city attracted those writers who actively sought out exciting and thrilling locations. Francis Van Wyck Mason wrote 78 novels in 50 years, many set in exciting locations. He especially liked ‘international’ cities—Shanghai and Constantinople (Istanbul), as well as Tangier. Cities where you felt anything could happen and an American could get into some intrigue and trouble. He published Two Tickets For Tangier (1955), a novel in his long-running and bestselling Colonel Hugh North (of G2 Military Intelligence) series. It’s classic pulp but with a good sense of location (Francis Van Wyck Mason travelled almost constantly and spent time in many of the places he wrote about) and pairs Colonel North with Lady Angela Forester of British Military Intelligence.

The prolific American novelist William Bayer lived in Tangier for a time and sought to look back and recreate the old world of the International Zone. Titled Europeans, Moroccan hustlers, aging former Nazis all populate his novel Tangier (1978). Typically of Bayer there are multiple strands—illicit affairs, betrayal, murder, male prostitutes, burnt out Soviet spies—all observed and investigated by a Moroccan detective who watches the foreign colony. Most of the characters can be traced back to real people. Bayer is a bit forgotten these days but his long and well researched descriptive passages make this a fantastic read for anyone preparing to venture to Tangier.

Arriving in Tangier by boat was (and is still) the best way to arrive. In Gregory Beaubien’s Shadows the Size of Cities (2015), which bounces from Madrid to Tangier to Marrakech to the Atlas Mountains and the border with Algeria, the main characters, two couples, are drifting through southern Europe and North Africa with no particular destinations in mind. Taking the boat from Algeciras, past the rock of Gibraltar towards Tangier:

‘It was about two in the afternoon when the town came into view. We stood on the deck and watched as the ferry drew closer. Little white cube houses were stacked across a series of hills. Four-sided minarets towered over the roofs. Higher up the mountain mansions looked over the town. The dreamlike sight belied the dread I felt but the possibility that I could still back out gave me fleeting rushes of hope.’

After the couples arrive in Morocco things turn bad—murder, drugs, betrayal in a downward spiral of backstabbing, torn loyalties and killing. Kevin Barry’s Night Boat to Tangier (2019) follows the same voyage in reverse with two fading Irish gangsters awaiting the arrival of the Tangier ferry in Algeciras. A gangster’s daughter has gone missing in Tangier and must be found. And while we’re still hanging around the port of Tangier the exceptional espionage writer Alan Furst’s Dark Voyage (2011) follows the tramp steamer Santa Rosa, that flies the flag of neutral Spain in 1941. But the Santa Rosa is not what she seems. She sails for the intelligence division of the Royal Navy and is involved in a secret mission. On board are a Polish engineer and British spy, Spaniards who fought against Franco and Germans who fought against Hitler. For them, this is a last desperate flight to freedom. The novel is a collection of heady wartime locations—Lisbon, Malmo and, briefly, Tangier.

Just as it seems only right that Alan Furst’s spies should visit Tangier in a novel, so too with Patricia Highsmith’s Tom Ripley. And he does, in his fifth (and last) outing Ripley Under Water (1991). Ripley is learning the harpsichord at his house in Fontainebleau, though is forced to leave for sanctuary in Tangier to avoid a blackmailer. It’s really surprising that Tangier didn’t make an appearance earlier in the Ripley series—it’s such a Ripley-esque town of no question asked, invent your backstory kind of folk. And also because Highsmith was a friend of Paul Bowles and visited him several times in Tangier over the years.

Very much in the style of Highsmith is Christine Mangan whose 2018 novel Tangerine ploughs a Ripley-esque furrow. Mangan recreates 1950s Tangier as a perfect location for a psychological thriller with old friends from back in the States reunited seemingly by chance in Morocco. Events though move fast and we soon realize there is more to the reunion than chance.

And finally, two crime novels by Moroccan authors (for more see my Crime and the City on all Morocco). While crime is a popular literary, and particularly TV, genre in Morocco we are bereft of translations into English. But we do have Abdelilah Hamdouchi, originally from Meknes, based in Rabat, and who usually sets his writing in Casablanca. However, his novel Whitefly begins when a fourth corpse in three days washes up in Tangier with a bullet in the chest. A case for Hamdouchi’s character, Detective Laafrit, who at first assumes it’s just more illegal immigrants who never made it to Spain. But it’s even darker—human traffickers, drug dealers, smugglers.

And Laila Lalami, originally from Rabat and now living in America. Her highly regarded Hope and Other Pursuits (2005) is a collection of stories following four Moroccan immigrants who try to cross the Straits of Gibraltar on a lifeboat, which capsizes offshore. One of the unfortunate immigrants is Murad, a gentle, unemployed man who’s been reduced to hustling tourists around Tangier. The stories in Hope and Other Pursuits are beautifully told though involve one of the most awful of contemporary crimes—people smuggling.

Tangier’s days as the ‘International Zone’ are over, though there is still something special about the winding streets and alleyways of Tangier that sets it apart somewhat from other Moroccan cities. It’s still a literary city with so many hangovers from those days—the Hotel El Muniria where William Burroughs wrote Naked Lunch, boltholed with a supply of typewriter ribbons and methadone; Le Tangerine, the bar where Ginsberg, Kerouac and others drank; the Gran Café de Paris where Truman Capote and Tennessee Williams drank. Tangier is certainly a writer’s town. 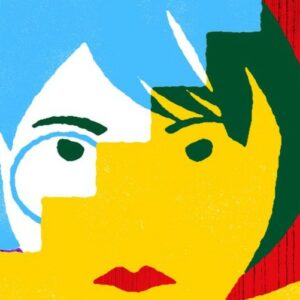 Another week, another batch of books for your TBR pile. Happy reading, folks. * James Wade, River...
© LitHub
Back to top