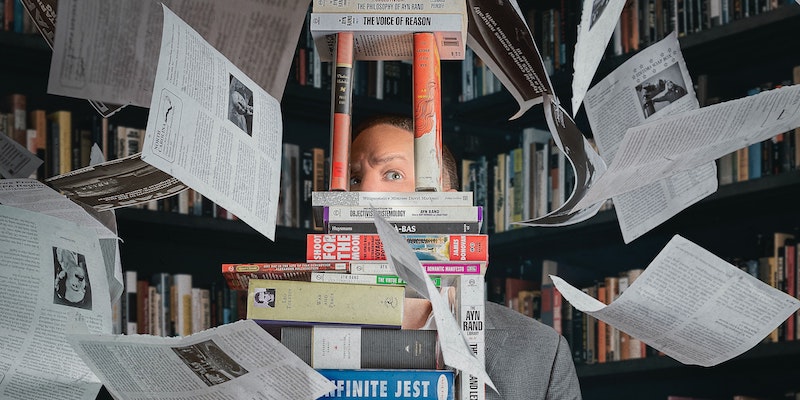 "And therein lies the despair. Too many books unread, too many movies unseen."

Lists are useful and terrifying things. I have a “To Do” list for my day job that is approaching 350 items since we shifted to a remote, quarantined office existence (don’t worry, I’ve checked off almost all of them over time). There are, however, lists generated by other people that sucker me in and drive me mad. I am referring to the “Best of” lists, particularly when they come to books or movies.

I should know better. These lists are compiled by people who devote their lives to these fields, whereas I, lucky enough to have a full-time day job to subsidize the side-gig/addiction of being a writer, find myself with not enough hours in the not enough days to keep up with either movies or books.

And therein lies the despair. Too many books unread, too many movies unseen. Too many people more knowledgeable than I who have seen/read them all, and who gravitate towards each other and away from me when they’ve learned I haven’t kept up, leaving me to drift in the Oort Cloud with the other planetesimals, snickering at Pluto’s fall from grace.

Lists nevertheless are useful for alerting one to gaps in life that can still be filled. Time and age unfortunately create obstacles. When I go through one of these lists of, say, the 100 greatest books of the 20th century, I invariably note that while my completion rate usually falls somewhere in the sixties, I read the vast majority before I turned thirty. What event could have produced such a drastic dwindling in my reading rate? The answer is simple: Becoming a parent at thirty-one. After that, much of my reading experience was to my son, and Dr. Seuss and Dov Pilkey tend not to crack the top 100. This period of my life was a joyous time, of course, but it cut heavily into my quest to check every box on the grown-up list.

And now that said son has been released to the world, I have to cope with the fact that I seem to have aged in the interim. There is much to catch up on. Apparently, other people spent those intervening decades writing more books and making more movies, oblivious to my need for them to pause until I had finished child-rearing and would have time for all of them again.

This is where the lists become essential. Among the reading I haven’t had time for are the reviews that would have alerted me to the books that I should be reading and movies I should be watching. The lists compiled from critics’ polls are the ones I find most helpful. Sure, individual critics have opinions that don’t always comport with my own, but enough of them collectively (what is the collective noun for critics? A squabbling?) will give me short cuts to a pre-winnowed reading.

There is also the pleasure of disagreeing with the lists. One that I’ve returned to recently is the American Film Institute’s 100 Greatest Film Comedies. This was significant for me because I incorporate humor into my mystery novels, and I’ve often been intrigued the close relationship between comedy and violence. This predates film, of course. Knockabout brutality has long been part of stage comedy, whether through pratfalls, slapstick, or the hurling of “edible missiles,” to borrow a term from Monty Python’s great sketch breaking comedy down categorically.

As with all such lists, I began by checking how many I had seen (85, and I have a few more waiting on DVR). Then I examined it closely for sins of commission (“Pulp Fiction” is a comedy? “Life of Brian” is funnier than “… Holy Grail?”), and sins of omission (Where’s “The Court Jester?” Richard Pryor? [I counted only three black leads on the list—Cleavon Little, Eddie Murphy, and Samuel L. Jackson, all in predominantly white environments.] Any movie from Asia, Africa or South America? (“The Gods Must Be Crazy?”) Are romantic comedies not comedies, because “The Shop Around The Corner” and half of Tracy/Hepburn should be in there.)

But what’s remarkable is how many of them depend on crime or violence to drive the plot. At least forty-two, by my count. Hitler (HITLER!), not generally considered a funny guy, shows up in three (“To Be or Not To Be;” “Zelig;” “The Producers”) and indirectly in another (“The Great Dictator”), and “Jojo Rabbit” would probably make the list if they made it today. “Some Like It Hot,” ranked as the single greatest comedy film, starts with a gangland shooting reminiscent of the Valentine Day’s Massacre. The second ranked film, “Dr. Strangelove,” begins with an American Air Force General going rogue and ends with a nuclear holocaust. Gangsters abound in “Born Yesterday,” “Pulp Fiction,” and “The Big Lebowski.” Assassins, spouse-killers, bank-robbers, grave-robbers—the most depraved acts imaginable become the stuff of comedy. They provide the frameworks for clowns, caricatures and fools to run wild.

Dead bodies and laughs mix well together, a truth since Shakespeare. Consider the categories of comedic criminal capers (alliteration is funny):

The amateur detective: Inherently comedic, because it’s a person professionally unqualified jumping into situations where she isn’t wanted.

The inept criminal or gang: Go straight to Westlake’s Dortmunder series, or further back to Breslin’s The Gang That Couldn’t Shoot Straight. Or the Ealing comedy “The Ladykillers.”

The innocent accused: Wrongfully suspected of a crime she didn’t commit, she goes on the run, locates the real culprit, and frequently finds romance along the way.

Mistaken identity or impersonation: Did I mention Shakespeare?

I leave you with a final quote from Mel Brooks, who wrote and directed three of the AFI 100 (featuring fraud, corruption, and re-animation of the dead, respectively): “Tragedy is when I cut my finger. Comedy is when you fall into an open sewer and die.”

Who am I to disagree? But watch where you’re walking. 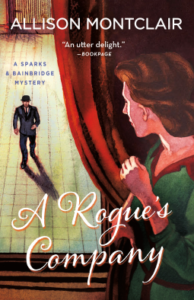 ALLISON MONTCLAIR grew up devouring hand-me-down Agatha Christie paperbacks and James Bond movies. As a result of this deplorable upbringing, Montclair became addicted to tales of crime, intrigue, and espionage. She now spends her spare time poking through the corners, nooks, and crannies of history, searching for the odd mysterious bits and transforming them into novels of her own. A Rogue's Company is her latest novel. 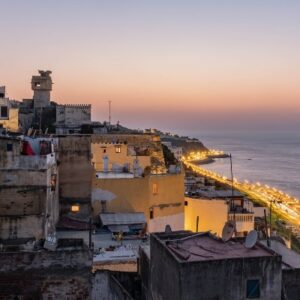 Crime and the City has been to Morocco before. Then we talked mostly about the crime writing coming out of, or set round...
© LitHub
Back to top