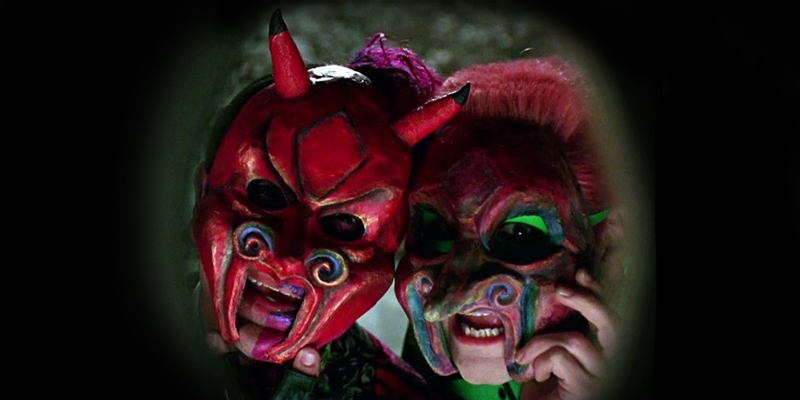 From "Kramer vs. Kramer" to "Batman Forever" to "Arsenic and Old Lace"

I always like watching how holidays are represented in movies, and one of the most interesting ones to get this treatment is Halloween. Why? Because Halloween usually exists within horror movies as a date of note; horror movies like Halloween or Donnie Darko or Halloween II or Hell House LLC or Halloween III: Season of the Witch or The Blair Witch Project or Halloween IV: the Return of Michael Myers all notably take place on Halloween.

But I’m interested in when non-horror movies have Halloween scenes. Movies like Meet Me in St. Louis or ET: The Extra Terrestrial or Mr. Mom or Ironweed or Mean Girls. Maybe the best Halloween scene in a non-crime movie is in Ed Wood, when Martin Landau plays elderly Bela Lugosi dressing up in his old Dracula costume to terrify trick-or-treaters. But this is a crime website, so today, I will be spotlighting CRIME movies that are set on Halloween. Once again, there will not be horror movies on this list. There might be thrillers or movies about legal cases. I’ll note right now that The Guest, the scary Dan Stevens movie from 2014, is not on here because I think it’s too close to a proper horror movie and the goal of this list is no tricks, all treats. 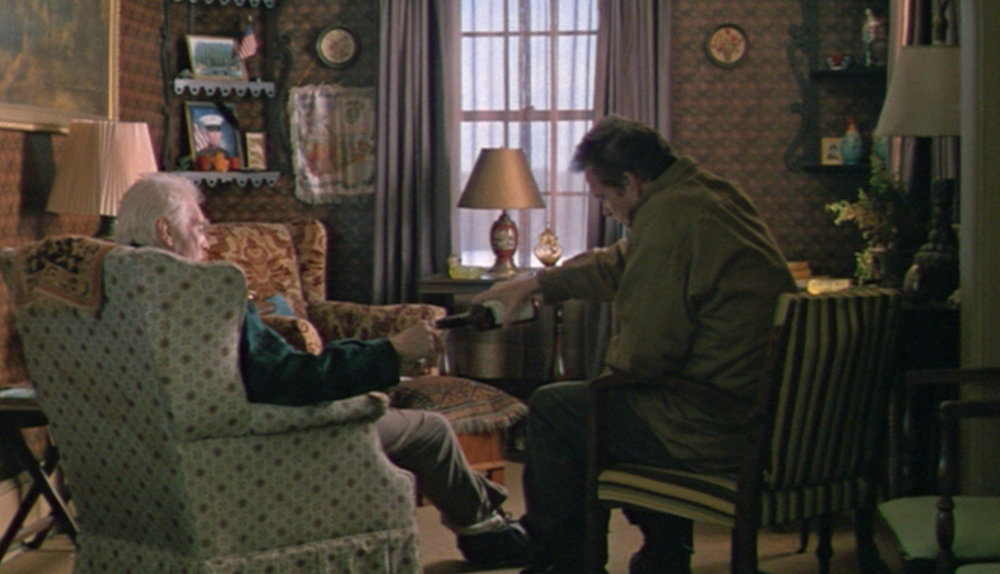 This gritty Paul Schrader neo-noir starring Nick Nolte, James Coburn, Willem DaFoe, and Sissy Spacek opens on a scene of familial discord that happens to take place on Halloween. It sets the movie up for tones of disorder and melancholy, but it’s not one of the film’s most “important” scenes, so I actually couldn’t find an image from it. This one will have to do. 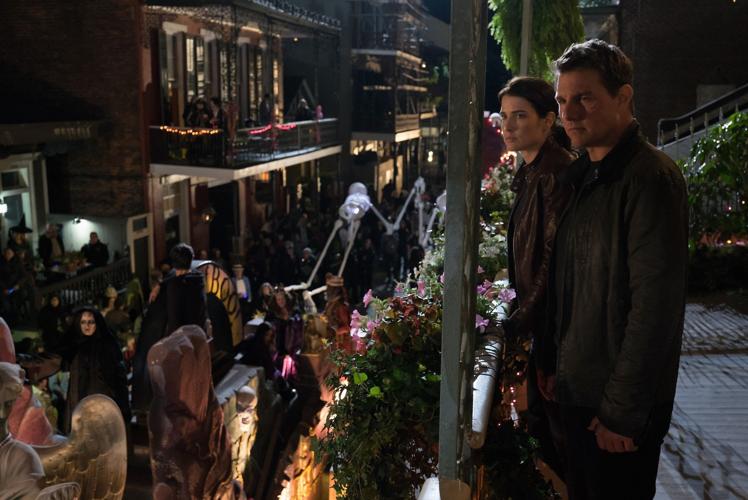 So, this isn’t the best Jack Reacher movie… but it does feature an incredible climax set during New Orleans’s Halloween parade. 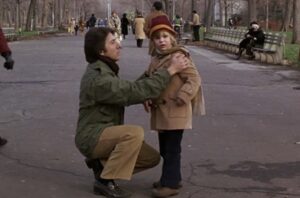 In this gut-wrenching movie about divorce, there is an adorable (and heartbreaking, because the whole movie is heartbreaking) scene where little Billy, the kid caught in the middle of Dustin Hoffman and Meryl Streep’s separation, is on stage at his school’s Halloween show. He is dressed as a vampire pilgrim (historically accurate, metaphorically speaking) and he can’t remember his lines, but his dad helps him from the audience. 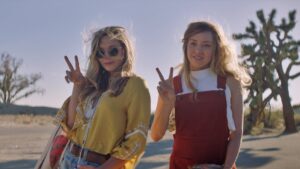 Ingrid Goes West, a black comedy about a woman (Aubrey Plaza) who stalks and ingratiates herself into the life of a social media influencer (Elizabeth Olsen), has a frankly harrowing denouement at a desert Halloween party in Joshua Tree. A lot of the movie is funny, but this scene is where the claws really come out. 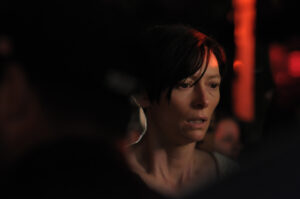 I argue occasionally with my best friend about whether or not We Need to Talk About Kevin is a horror movie, and, okay, it might be, but it’s definitely at least a thriller. Tilda Swinton plays a woman who realizes that her son Kevin (Ezra Miller) is a psychopath. This film’s Halloween scene, in which Tilda Swinton drives around the neighborhood and is terrified by the ghoulish children running around, is indicative of how threatening she finds her son and how haunted she is by him. 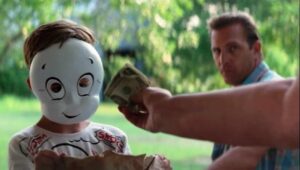 Clint Eastwood’s crime drama, about escaped convict Kevin Costner who takes a young boy hostage and tries to flee across the country with him as leverage but grows to love him and wants to protect him, is a real gut-wrencher. And one of the best bits is when the little boy, who has never been able to participate in Halloween because of his mother’s extreme religiousness, gets to wear a Casper (as in, the friendly ghost) costume that they shoplift. (If I’m being honest, I don’t remember that this takes place exactly on Halloween, but whatever, the spirit of the holiday is there!) 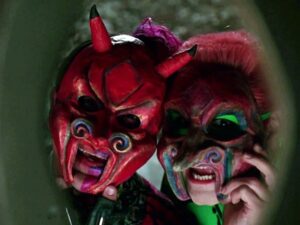 Batman Forever gives us one of the best concepts in a Batman movie (Alfred passing out candy to trick-or-treaters at Wayne Manor on Halloween) which it turns into a fantastic set-piece: the Riddler and Two-Face (in masks, but do they even need them?) coming to call in the middle of it all. 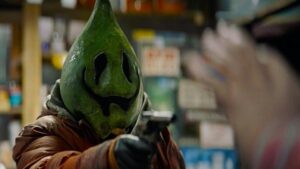 Matt Reeves’s recent film The Batman is nearly a perfect movie, and you can tell this will be the case when the film opens on a rainy Halloween night and the Riddler creeps into the mayor’s mansion to murder him. But that’s not even the best Halloween scene… I’m talking about the following one, in which Batman speaks about how he stalks the shadows of Gotham, waiting for evil to strike, over a montage of low-level criminals and gang members in garish masks doing their worst. 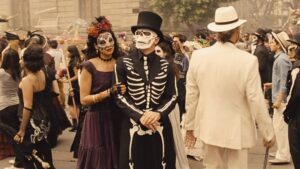 The best scene in Sam Mendes’s Spectre, the fourth Daniel Craig James Bond film, is (hands down) the incredible opening at the Mexico City Día de los Muertos parade, which is one loooooooong tracking shot through, up, in, and around the festivities. Technically, this scene probably takes place on November 1st, because that’s when the holiday is, but whatever… it’s amazing and deserves to be celebrated. 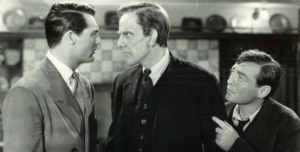 The entirety of Frank Capra’s wonderful “Halloween Tale of Brooklyn” is set on October 31st, which doesn’t disqualify it from this list about “individual Halloween scenes” so much as give us lots of scenes to choose from! I think it’s the scene where Cary Grant’s long-lost criminally insane brother who has just had plastic surgery that makes him look like Frankenstein’s monster shows up. 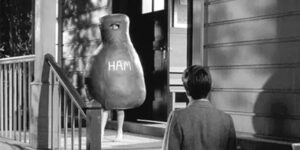 Scout dressing up as a ham for Halloween is the funniest part of this otherwise not exactly “laugh-out-loud” film. Or, it’s funny until Bob Ewell follows her when she’s walking home and tries to strangle her in the dark from behind and Boo Radley saves her, and then it becomes extremely stressful. Thank goodness for Boo Radley. 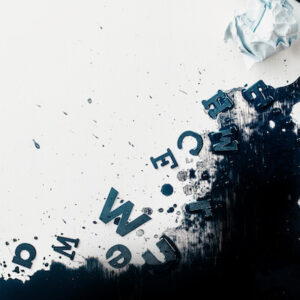 I’ll never forget the scream coming from the basement the day my mother learned her mother had been murdered by her own husband—or...
© LitHub
Back to top