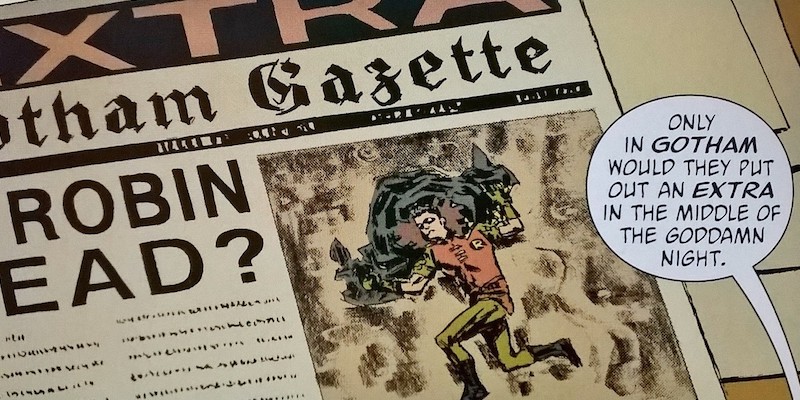 Ranking the very best journalists on the superhero beat.

Whether it’s Gotham City, Metropolis or Marvel’s version of New York City, it’s hard for the public to know what’s really going on when the most important news on any given day often involves masked figures throwing down in secret headquarters.

For the everyday citizens of those places, the few peeks behind the curtain they can steal are provided by some of the most intrepid reporters to ever hold a notepad. As hard as my job is trying to speak truth to power in the real world, these folks speak truth to superpowers. Can’t say I’ve ever sought comment from someone who could erase me from existence with their eyes or run fast enough to break the sound barrier.

So, let’s take a look at some of the best reporting in comic book history. But first, a few rules. I wanted to focus this on people whose primary focus is the news. Anyone who heroes first and reports second (Peter Parker, Clark Kent, Vic Sage) is out. No Lois Lane either, because you already know that and a reporter’s job is to bring you new information. 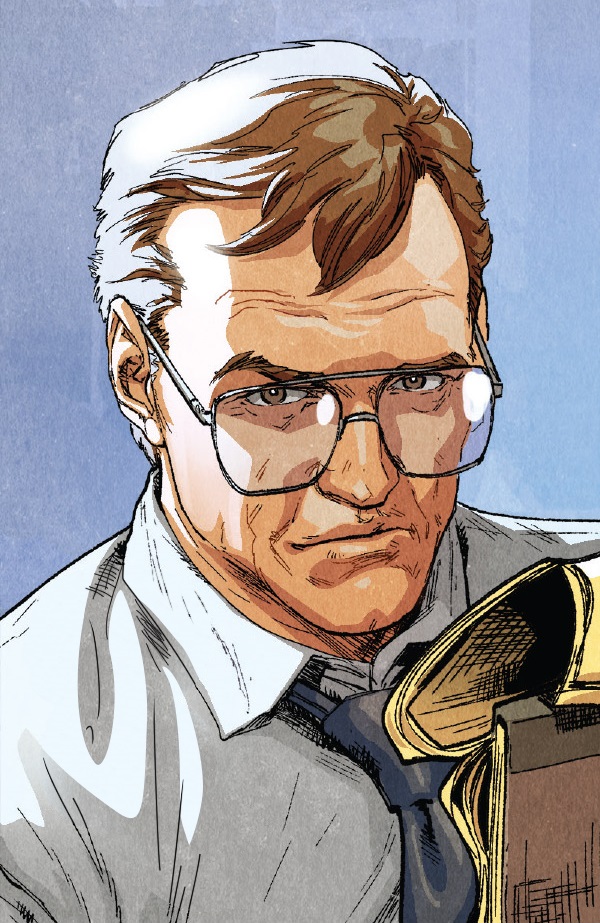 As to avoid burying the lede, let’s start with the G.O.A.T. The Daily Bugle’s ill-tempered, chain-smoking investigative reporter has been a consistent thorn in the sides of New York’s powerful and corrupt for decades. Whether he’s barking at TV anchors for making basic J-school mistakes or pleading with his editors for more space in the paper to explain suspect donations to Wilson Fisk’s mayoral campaign, Urich is the most accurate representation of a salty ink-stained wretch in comics.

For decades, Spider-Man fans knew the webslinger’s sadistic arch-nemesis was industrialist Norman Osborn. But the New Yorkers on the page had no clue as to the identity of the masked psychopath pumpkin bombing half the city. Urich spent years linking the Goblin’s crimes and weaponry to Osborn, eventually revealing his identity in a book titled “Legacy Of Evil.” Osborn managed to discredit Urich and nearly ruin his career, but Urich and the Bugle refused to retract. Two years later, Osborn was publicly unmasked in The Pulse (a journalist-focused series you should go back and read) and Urich’s dogged reporting was validated.

Urich’s not just a scoop machine, though, he’s also a responsible reporter. The veteran has long known the secret identities of Daredevil and Spider-Man but has never revealed either, choosing to protect his sources even at the risk of his own job. 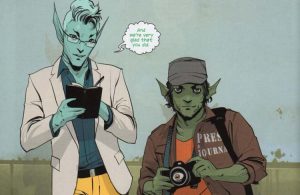 Story: Undermining The Premise Of the Wreath-Landfall War (well…almost)

“Putting new ideas into another’s head is an aggressive act…you can be a writer or a pacifist, but you can’t be both.” – Upsher

I don’t know if there’s an intergalactic Pulitzer, but if there is, the amphibian reporter/photographer duo of Upsher & Doff were very close to winning it. At least until the fish-faced scribe’s quote up there proved all too prescient.

Bryan K. Vaughan’s sci-fi epic, Saga, is the story of two star crossed lovers on opposite sides of a military conflict between the planet Landfall and its moon Wreath. The clash has exploded into a galactic proxy war, leaving millions dead across the universe. As the story builds, the reader and a good chunk of the ensemble cast start to sense that the two planets who started this mess may actually be colluding.

As of Saga’s 2018 hiatus, Upsher & Doff have not broken their big story. But they’re on this list because of how close they came, and the all too realistic struggle—personal & professional—that often comes with trying to nail down a massive, institution-shattering article. If Urich is the ideal most reporters should strive to be, Upsher & Doff are our mirrors.

The pair spent years weighing the danger of exposing the love affair between Alana & Marko against the very real possibility that writing an article about their union could change hearts and minds about the military conflict tearing apart the universe. Like most reporters, they’re also chasing employment at a more lauded institution than the Hebdomadal (a space supermarket tabloid) and know this story could be their meal ticket. But Upsher & Doff also happen to be boyfriend & boyfriend—a death sentence on their home planet of Jetsam—and understand the risks of exposing someone else’s forbidden love all too well.

Somehow in a story involving magic, sex-addicted androids, lie-detecting cats and enough species to make Star Wars blush, Saga gave birth to two of the most relatable reporters in comics. 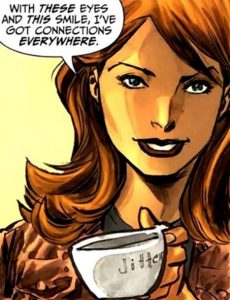 This one feels a little like cheating, because I’ve read so few Flash comics. But in the CW’s take on the Scarlet Speedster, Iris West proves herself to be the best of a dying breed here in the real world—a devoted local journalist.

West is working as a waitress, not a reporter, when she first begins to document the activities of meta-humans throughout Central City. Her blog “The Streak Continues” (later renamed Saved by the Flash) is one of the best examples of hyperlocal journalism I can think of in comics.

While real-life supervillains like Alden Global Capital are bleeding newspapers dry on your Earth, and Clark Kent and Lois Lane are globetrotting for the Daily Planet on the Flash’s Earth, Iris is out there chasing police scanner tips, doing the nose to the ground, street-level reporting that often goes underappreciated in both reality and the pages of DC Comics.

It’s not glamorous, but it’s essential and Iris does it better than most of her peers. She also gets bonus points for sticking to her ideals when she gets hired by the Central City Picture News and risks her graduation from blogger to full-time reporter by pushing back on an editor’s requests to write negative stories on The Flash. Of course, Iris was hooked onto the Flash beat long before CCPN knew one existed and she stands her ground. 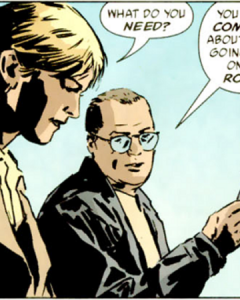 I’m a police beat reporter, so yeah, I gotta give it up for one of my own. Gotham Central was Ed Brubaker & Greg Rucka’s semi-realistic look at how law enforcement would function in a city where a random motor vehicle stop could leave an officer staring down a freeze ray.

Lippman is the reporter assigned to covering the GCPD’s Major Case Unit (the “freak beat,” since they’re often tasked with applying law & order to the folks Batman punches on rooftops). In the same way the series tightly focuses on the way a cold case murder investigation would play out if The Mad Hatter was involved, Lippman has to find a way to coax info out of the MCU squad room while Joker holds the city hostage under the threat of sniper fire.

This all comes to a head during the penultimate arc of the all too short-lived series, “Dead Robin.” With a serial killer running around Gotham slaughtering teens and posing them in Boy Wonder costumes, the Gazette manages to obtain crime scene photos. This leaves the MCU’s Capt. Maggie Sawyer furious and she turns on the reporter who has held her squad room’s trust for a long while. She demands to know who leaked Lippman the photo, and he refuses (we later learn Lippman isn’t even the person who obtained the image.) Lippman refuses to crack, even when Sawyer effectively blacklists him from the GCPD. I’ve been there (sup Newark?) and it sucks, because you’re basically rendered unable to do your job…as a result of doing your job.

Lippman is later framed for the killings and comes to realize his only alibi involves sacrificing his ethics and revealing the truth of how the Gazette got the photos. Even then, he refuses, answering the question most of us don’t want to—would we go to prison to protect a source? Eventually, Lippman is cleared, and in an exclusive interview, Sawyer acknowledges he played a pivotal role in catching the killer. But Lippman says he won’t use that in the story. Because he’s a pro. 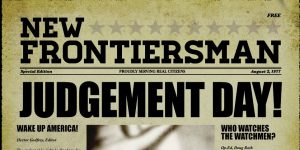 Story: Exposing The Truth Behind 9/1

I struggled with this one, I really did. The New Frontiersman is the racist, anti-Semitic, hell rag that appears sporadically throughout Watchmen and is the favored publication of noted maniac Rohrshach. It’s Brietbart and InfoWars’ half concussed grandparents who married through incest and then got drunk and then decided to buy a printing press. It’s an absolute disgrace to all things journalism.

But it also broke the biggest story in the history of comic books.

In the final pages of Watchmen, Godfrey (who I guess is the Alex Jones of this thought experiment) orders a lackey to pull some items from the “crank file” for its equivalent of a letters to the editor section. By complete accident, the paper ends up printing Rohrshach’s Journal, just days after a supposed an attack from an interdimensional beast spun the world on its head and averted a nuclear war between Russia and the U.S., who are now focused on a common, calamari style enemy.

The truth, of course, is that the attack was actually orchestrated by the Adrian Veidt, the world’s smartest man and, if we’re keeping score (and my friend & I do have a rubric for this if CrimeReads needs another article) the most successful supervillain in comic book history.

The Frontiersman publishes this information for all to see. And no one believes it, or even seems to care. The world goes on.

Part of what has always intrigued me about the Frontiersman, especially in light of HBO’s peek into the way the world of Watchmen would have evolved after the end of the graphic novel, is how instructional it is about the weight of reputation in journalism. Given the sizable audiences some of our country’s most disreputable publications command, imagine if they lucked into a similarly explosive story, something the public desperately need to know, and it went ignored.

The Frontiersman broke the biggest story in the history of the world. And no one believed it. Because they had absolutely no reason to.

James Queally is an award-winning crime reporter for the Los Angeles Times and the author of the acclaimed novels ALL THESE ASHES and LINE OF SIGHT. Throughout his career, Queally has covered hundreds of homicides, as well as national use-of-force controversies and the Black Lives Matter Movement. His short stories have appeared in Thuglit, Crime Syndicate Magazine, Shotgun Honey and more. 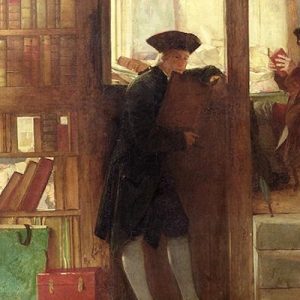