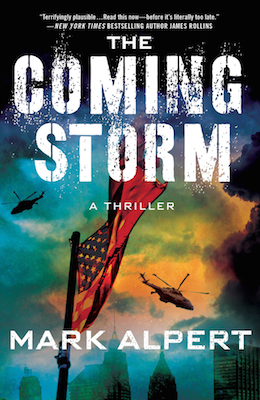 The following is an exclusive excerpt from The Coming Storm, Mark Alpert’s new technothriller about a not-too-distant future in which genetically enhanced federal agents oppress the citizens of war-torn New York. Here, a tsunami destroys Coney Island and threatens the life of Jenna Khan, a dissident scientist on the run.

It was the hardest thing Jenna had ever done.

Even in daylight and good weather, walking on the elevated tracks would’ve been difficult. The steel rails were supported by wooden railroad ties that had been installed decades ago. The ties were splintery and waterlogged and littered with all kinds of wet trash—plastic bags, soggy newspapers, McDonald’s wrappers. And on this section of the elevated line, there were yawning, foot-wide gaps between the ties, which meant that a misstep could easily break your leg.

But the storm made everything a hundred times worse. Jenna could barely see where she was going, and the gales from the Atlantic battered her. Derek marched down the middle of the westbound track, exactly midway between the rails, stepping quickly and efficiently from one railroad tie to the next, but Jenna couldn’t keep up. Halfway to the next station, a powerful gust threw her off balance and she fell to the track. Her hands smacked into the edge of one of the ties and her knees smashed into another.

“Fuck!” She lay facedown across the track, dizzy and hurting all over. Her head hung between two of the railroad ties, and through the gap she could see the flooded street below. She waited a moment for the dizziness to pass, then raised her head and looked for Derek, who was twenty feet farther down the track. “Hey! HEY!”

He stopped and turned around, but he didn’t come back to help her. He just raised his right arm and pointed to the east. Jenna slowly and painfully stood up, planting her feet on the ties and bracing herself against the wind. Then she looked east, back to Brighton Beach, about a mile behind them. The armored personnel carriers were hidden behind the rows of buildings, but she saw the beams of their searchlights. They illuminated the sheets of rain falling on the neighborhood.

Jenna got the message. The FSU was hard at work. She and Derek had to get farther away. She took a deep breath and continued trudging down the track.

Jenna got the message. The FSU was hard at work. She and Derek had to get farther away. She took a deep breath and continued trudging down the track.

After a few minutes the storm’s fury subsided. The clouds thinned, glowing with the light of the full moon above them, and the winds died down, allowing Jenna to walk a little faster. The elevated line curved toward the ocean and passed a complex of high-rise apartment buildings, all in disastrous shape. Their windows were long gone, shattered in previous storms, and their balconies were badly damaged. But the buildings hadn’t been completely abandoned. Some of the windows were boarded up with plywood or cardboard, and some of the apartments glowed with flickering light, most likely from the candles and Coleman lamps of squatters.

Soon they reached the next station, just north of Surf Avenue. This used to be the stop for the New York Aquarium, but that place was demolished in one of last year’s storms. Farther west were the remains of the amusement-park rides that used to crowd the area between Surf Avenue and the Coney Island boardwalk. The same storm that wrecked the aquarium also knocked down the Cyclone roller coaster, which now lay in a tangled heap of wood and steel, surrounded by the floodwaters like an island. There were smaller islands of debris where the other rides once stood: the Thunderbolt, the Sling Shot, the Seaside Swing, the Brooklyn Flyer.

Jenna stared at the piles of rubble. She’d loved the rides at Coney Island. Because her family lived so close to the amusement park, they used to go there every weekend when she was a kid. Those were the good years, before Jenna went to college and everything fell apart. Her mother was alive back then, and Raza could still walk. Her father was a happier man then, always teasing her and making stupid jokes, and Jenna was happy too, a cheerful Muslim girl who still said her prayers and wore her hijab. Their favorite ride was the Wonder Wheel, the hundred-year-old Ferris wheel that towered over the boardwalk. All four of them would sit in one of the Wonder Wheel’s cars and watch the whole city come into view as the wheel spun them upward.

The Ferris wheel was still there, just two hundred yards from the elevated tracks. It was the only ride that hadn’t been destroyed, probably because it had been built so solidly. It loomed high above the flooded beach and the ruined boardwalk, a huge, skeletal disk with dark, criss-crossing spokes.

As Jenna stared at the thing, the wind from the ocean picked up again. The storm strengthened, lashing her with so much rain that she had to crouch and hold on to the railroad ties. Derek stopped too and looked over his shoulder at her. Then he turned to the south and gazed at the Atlantic. His body went still. He froze in that position, so motionless that his silhouette seemed to become part of the tracks.

Jenna looked in the same direction. Although the ocean and sky were almost equally dark, she could make out the horizon. It was rising. A massive sea swell, stretching for miles from east to west, rushed toward Coney Island. She stared in horror at the long, black wall of water. It was at least sixty feet high and capped with white breakers, furiously charging toward the shore.

Derek snapped out of his trance and raced over to her. He grabbed her arm and yanked her to her feet. “Run, goddamn it! If you want to stay alive, keep up with me!”

They started running side by side, heading west at full speed. Only a minute ago, Jenna had struggled to walk on the tracks, but now she hurtled over the railroad ties. Off to her left, the sea swell rolled closer and climbed higher, but she fixed her eyes straight ahead and focused on her stride. She aimed her bare feet at the ties and sprang off them with all her strength, doing everything she could to run faster. Derek’s grip on her arm kept her steady and gave her momentum. In seconds they left the Aquarium station far behind and dashed toward the Stillwell Avenue stop.

But they weren’t fast enough. The sea surge roared over the beach, carving a new channel through the sand. The wall of water struck the broken boardwalk and tore off a giant piece of it, a thick slab of concrete and wood, almost a hundred yards long. Propelled by the surge, the slab careened through the ruined amusement park, sliding into the piles of debris. Then it slammed into the base of the Wonder Wheel.

The crash echoed over Surf Avenue and the elevated tracks. Without breaking stride, Jenna turned her head to the left and saw the stretch of boardwalk jammed against the Ferris wheel’s spokes. The wheel tilted for a moment, leaning away from the ocean. Then it plunged to the ground and splashed into the floodwaters. The sea surge swept over the wreck and streamed toward the elevated line.

Derek ran even faster, pulling Jenna forward. “Come on, come on!” Her lungs were bursting. It was no use. The ocean slid over Coney Island like an immense black sheet, carrying tons of bobbing wreckage. Its frothy edge smashed into the two-story buildings on Surf Avenue and obliterated their brick façades. An instant later, the deluge rammed into the steel columns that supported the train line.

Article continues after advertisement
The ocean slid over Coney Island like an immense black sheet, carrying tons of bobbing wreckage. Its frothy edge smashed into the two-story buildings on Surf Avenue and obliterated their brick façades.

The impact shook the tracks. The railroad ties shuddered and Jenna lost her footing. She started to fall backward, but Derek swung her around and swooped an arm under her knees. He lifted her to his chest and kept running between the rails, leaning forward and breathing like a bellows.

She couldn’t believe it. He was unnaturally strong and phenomenally fast. The elevated line swayed and vibrated, hammered by the sea surge coursing underneath it, but Derek kept his balance and sprinted ahead.

Jenna clutched his torso, holding on for dear life, and felt the muscles working under his skin. She peered over his shoulder and saw the tracks buckle a hundred feet behind them, the steel rails twisting and the railroad ties snapping. But Derek outran the collapse. He reached the section of track that curved north, away from the ocean, and then dashed for the shelter of the Stillwell Avenue station.

And then, all at once, they were out of danger. The station was a massive concrete structure with a huge steel canopy arching over the tracks. The terminal had been renovated a decade ago, and Jenna guessed that the reconstruction crew had done a good job, because the place looked remarkably undamaged. Derek slowed to a jog, then stopped on the tracks beneath the arching canopy. They were safe from the storm here.

But Jenna didn’t feel safe. Not at all. Although Derek had saved her life, she was more uneasy than ever. She squirmed in his inhumanly strong arms. “Let go of me! Put me down!”

He stepped toward the station’s platform and gently set her down on its edge. “I have something for you.” He climbed onto the platform beside her, grasped her elbow, and led her across the station.

They weren’t alone here. Because the Stillwell Avenue Station was so well protected from the weather, other refugees from the storm had sneaked into the terminal.

There were cardboard boxes on the platform and homeless people sleeping inside them. Jenna couldn’t see their faces, only the parts that stuck out of the boxes, the legs and torsos wrapped in rags and soiled blankets. What surprised her the most was that the storm hadn’t woken anyone. The city all around them was drowning, but this station’s platform was safe and dry, so the people here slept right through the catastrophe. They were so exhausted, they hadn’t even noticed it.

Derek dragged her to the far end of the platform, where the elevated tracks ran north to Gravesend and Bensonhurst. There were two more cardboard boxes at this end, and the smaller one was occupied—a pair of long legs in filthy jeans and muddy sneakers poked out of it. But Derek ignored the sleeper and led Jenna to the larger box. She sat down on the platform while he reached inside the box and pulled out a canvas duffel, an olive-green bag with the words “U.S. Army” stenciled on it. This was Derek’s box, she realized. He’d brought her to his makeshift home.

From THE COMING STORM. Used with the permission of the publisher, St. Martin’s Press. Copyright © 2019 by Mark Alpert. 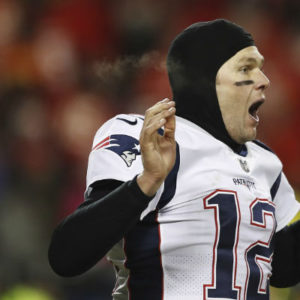 Predicting the Super Bowl with Crime Fiction The week leading up to the Super Bowl is a strange time for any sports fan, never mind if your team is actually competing....
© LitHub
Back to top