Why are readers obsessed with the super-charged atmospherics of the campus thriller? The answer is as complicated as the novels.

The setting is easily visualized: a leaf-starred campus, buildings beset with ivy, dorms packed with teenagers who may have just met for the first time but for whom friendship feels instant and intense. It’s a time of life when everything feels like the most important thing that will ever happen, each mistake monumental in scope and each victory a magnified triumph. It’s a heady cocktail of intellectual challenges, emotional complexity, a dynamic social life—maybe even a public reckoning. With these memories so easily conjured, is it any wonder that we’re so drawn to campus novels, and thrillers in particular?

In my debut adult novel, The Girls Are All So Nice Here, eighteen-year-old Ambrosia Wellington begins her freshman year at Wesleyan, a smallish liberal arts college in Connecticut. I chose this setting, and the timeline of an intense, devastating semester of freshman year, for a reason: I wanted to showcase a girl who had never lived away from home before, a girl who felt pressure to rebrand herself from the person she had been in high school. Ambrosia wants to stand out. By the middle of her freshman year, she will achieve that goal, but for all the wrong reasons.

The pressure on teenagers—especially girls—to reinvent themselves in college is real and relatable. It’s a fresh start, and not taking advantage of that clean slate would seem criminal, especially after a lackluster high school experience. I wanted to harness the emotions that many girls feel and channel them into Ambrosia, who is a combination of insecure, hopeful, terrified, and excited when she starts school. I remember feeling the exact same way as a freshman: mentally ready to reach my full potential, but emotionally unsure of how to do it. I think this is exactly why so many of us will eagerly devour anything set on campus: it’s a setting that promises reinvention, but the reinvention itself is never easy. High school, for me, had been fraught with awkwardness and extreme self-consciousness: I wore braces almost until graduation and had an overbite, so I was insecure about how I looked, and I tended to retreat into books more often than not. With my braces finally off and my overbite corrected, meeting new people who didn’t know that shy, unsure side of me was a tantalizing prospect.

Dark academia has long been a source of intrigue. Like many authors of psychological suspense, I consider Donna Tartt’s The Secret History gospel—a dense, swirling, hedonistic story centered around an intensely private, brilliant group of Classics students at an elite liberal arts college. Herein lies another appeal of campus fiction: the sought-after clique that everyone wants to join; the friends you want to surround yourself with as part of your rebranding. How many of us have aligned ourselves with the wrong friend group, or ventured into the wrong relationship, because we liked the idea of someone more than the person themselves—and by association, the person we can become in their presence?

Perhaps this is a big reason why readers are hungry for novels set on campus: in them, we can recognize younger versions of ourselves, and watch them make the same mistakes we might have made (although sometimes, with catastrophic and far-reaching consequences). It’s a way of reliving history: escapism, but an escape we’ve already made. Often, college stories center on the intense friendships that develop within such an insular environment. Tangerine by Christine Mangan, partly set at Bennington in Vermont (the inspiration for the fictional Hampden College in The Secret History), dives deep into an obsessive female friendship; Tell Me Everything by Cambria Brockman focuses on a tight-knit group of friends with secrets from each other, and follows them from freshman to senior year, when their closely guarded truths unravel them. A college setting is a breeding ground rife for lies and shifting allegiances:

the people you meet feel instantly familiar due to forced proximity, and only later do you understand that you don’t know them as well as you thought. Entering campus can be akin to a time warp: a nascent friendship of only a few weeks packs the significance generally reserved for years of proven loyalty.

The romantic entanglements in college are another reason why the campus thriller is so alluring. As people reinvent themselves in college, they establish a framework for the kind of relationships they want in their new lives. In The Truants by Kate Weinberg, narrator Jess conceals her feelings for enigmatic journalist Alec because he’s dating her roommate. These dynamics are familiar to many, especially in the pressure cooker of college years. Allegiances can be ephemeral, and can have a domino effect that feels seismic when they shift and crack. For many students, there’s even a pressure from parents or friends to find “the one” at college, which can lead to warped expectations of love and romance.

The claustrophobic, tightly contained setting of college itself is a draw for readers: whatever happens generally occurs within the framework of campus, where gossip travels quickly and everyone knows each other’s business, or at least tries to. Rumors can ruin lives, and nowhere is this more evident than on campus, where such ruin can feel permanent in a way it doesn’t anywhere else in life. As an eighteen-year-old freshman, every misstep feels like the most important mistake you will ever make. Seeing characters make terrible decisions on the page is like a train wreck we can’t look away from: it could so easily have been us, and maybe it even was.

What I found when I started college was that I wasn’t unique in my quest for reinvention. And the microcosmic environment of high school, where people were often stereotyped at the beginning of the four years, dissolved in favor of a different dynamic that was less clique-y and more inclusive. Nobody knew who I’d been in high school, nerdy and uncomfortable in my skin. But beyond that, nobody cared. It became less a secret I had to hide, and instead turned into something that was just part of my story.

Ambrosia writes letters to her grandmother as a college freshman, pretending all is well when nothing could be farther from the truth. It’s one in a series of subtle machinations that lead her to rewrite her reality. And maybe that’s ultimately why we’re so obsessed with campus novels: because in reading them, we can revisit our own memories, good or bad or a mixture of both, and immediately be transported to a time in our lives when things were simpler on paper but so much more complicated in reality. A place where real-world rules and responsibilities don’t necessarily apply, but where unspoken ones reign.

Laurie Elizabeth Flynn is a former model who lives in London, Ontario, with her husband and three children. She is the author of three young adult novels: Firsts, a YALSA Best Fiction for Young Adults pick, along with Last Girl Lied To and All Eyes on Her, under the name L.E. Flynn. Her adult debut, The Girls Are All So Nice Here, has sold in nine territories and has been optioned for television by AMC. Visit her website LaurieElizabethFlynn.com or connect with her on Twitter @LaurEllizabeth.
http://LaurieElizabethFlynn.com 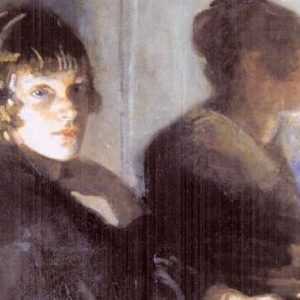 Most mystery lovers know of Wilkie Collins, beloved for his classics “The Woman in White” and “The Moonstone,” old-fashioned...
© LitHub
Back to top