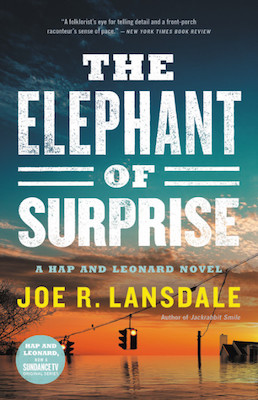 The following is an exclusive excerpt from The Elephant of Surprise, by Joe R. Lansdale, the latest to feature everyone’s favorite crime-solving duo, Hap and Leonard, as they protect a woman embroiled in a mob misstep and navigate a historic East Texas flood.

The night was dark, wet, and cold, and the rain was coming down hard. The trees on the right side of the road were bending toward us as we passed, and leaves and limbs were coming loose of them, tumbling in front of and against the car. I kept driving, dodging branches when I could, hoping there were no washed-out sections in the road or a limb didn’t hang up beneath us.

The wipers slaved back and forth like a mean librarian wagging her finger at a loud child, and the lights bounced off the night. I kind of wished to see another car on the road, but most everyone else had sense enough to get in out of the storm.

Me and Leonard had finished up a surveillance job in San Augustine and were on our way back to LaBorde. When we’d left, the sky was clear and you could see the stars and the partial moon, but that situation had changed five miles out of town. First came the wind, then thunder and lightning, finally the rain, and then the wind picked up even more, and it began to seriously storm.

I had the car heater on to fight the January cold, and it was mostly working. I was hungry and thinking about being home with some food and a big hot cup of decaf coffee but knowing, late as it was, I ought to just go on and go to bed and wait for breakfast.

Maybe just a granola bar and a glass of milk.

Or I might have some cereal. Only one bowl. A small bowl. A bagel, no cream cheese. Light butter, maybe. Might be some of that barbecue left over from the other day. No. That was too heavy. But hell, barbecue, that was nice, and if it stayed in the refrigerator too long it could ruin.

I looked up as something ran into the highway. I whipped to the right, just missing a bar ditch, and skidded to a stop in a spray of water. I glanced in the rearview mirror and then the water-beaded side mirrors, but all I could see was rain.

The wipers slaved back and forth like a mean librarian wagging her finger at a loud child, and the lights bounced off the night.

“It was somebody,” Leonard said. “Could have been an animal?”

I drove up a space and turned in the road, trying to be careful not to end up too far on either side, as the earth there slanted down into ditches. It was wet and muddy and steep, and easy to slide. If we ended up in a ditch, it would be full of fast-running water and the only way out would be a wrecker, if we had cell service to call them. We were in a bad place for that. And I wasn’t sure a wrecker service would come out in this. Hell, Noah wouldn’t come out in this, and it was getting worse by the moment.

I got us turned around and drove slow but didn’t see anyone, at least not at first, and then Leonard said, “Hap.”

I braked and skidded slightly, looked where he was pointing. A girl stumbled back into the road, having made it across, then having decided to come back. She was waving her hands at us. Her hair was white in the headlights and was plastered against her head like a cowl, some of it draped across her face, and there was something dark running from her mouth and down her chin. The rain washed it away as fast as it appeared. She was small and pale and obviously weak. She was wearing a stained T-shirt and pajama shorts and was barefoot. She collapsed in the road.

Leonard got out and went after her, the rain hammering against him, the cold wind whistling into the car through the open door. He picked her up like she was a doll and carried her back to the car. I unfastened my belt, leaned back and stretched over the crack between the seats and worked the back door open. Leonard set her inside, nudged her to the center of the seat.

With the doors open, the inside was lit up, and I saw the girl was an albino, and Asian, and so small I at first thought she was a child of eleven or so. She opened her mouth and blood ran out and dripped over her chin and onto her chest.

She looked up at me with pale eyes, not white, but a blue so thin they were almost clear. She had the appearance of a wounded bird trapped behind glass. She tried to talk but all that came out of her mouth was blood and a choking noise.

Leonard closed the front passenger-side door, slid in beside her on the backseat, closed the back door, said, “You’re all right. We got you. Easy, now, let me look. Open your mouth.”

He gently touched her chin, looked inside her open mouth, said, “Hap, give me the flashlight.”

I reached over and into the glove box where we keep a pistol and a flashlight and some odds and ends and pulled out the flashlight and gave it to him.

The young woman was starting to moan. “Easy,” Leonard said, “just a peek.”

Leonard looked, and there in the glow of the flashlight, I could see his face change.

“Give me the Kleenex,” he said.

She had the appearance of a wounded bird trapped behind glass. She tried to talk but all that came out of her mouth was blood and a choking noise.

I opened the glove box again and got out a small packet of Kleenex. Leonard took it, tore the plastic cover off of it, pulled out all the Kleenex, and said, “Honey, you need to put this here in your mouth and close it gently. Might tilt your head back, but don’t lie down.”

He put the Kleenex in her mouth, and she didn’t argue about it. He strapped the seat belt around her, said, “You’ll be all right.”

That’s when a big black SUV came out of a side road about where the girl had first appeared and turned into our lane so that its headlights were pointing right at us. The SUV stopped and a big black man in black clothes wearing a dark, rain- beaten hat got out of the car on the passenger side. He looked as if he could straighten the Leaning Tower of Pisa with one hand. He had a large pistol held down by his side. The tower gave him any shit, he could shoot it.

The man in the road lifted the handgun.

I threw the car in reverse and looked over my shoulder between the woman and Leonard, and as far as I could tell, all that was behind us was night and rain and the faint glow of my taillights. I stabbed the gas and away we went. I heard a gun crack and something scraped across the top of the car. It had been a hasty shot.

I kept my foot punched down on the gas, took a forward glance, and saw that I had made quite a gap between us and the SUV, but a Prius isn’t a race car.

He slid between the seats and into the front, opened the glove box and took out the automatic pistol, said, “Turn it around.”

I stepped on the brake and the car slid. I turned the steering wheel in the direction of the slide and whipped the car completely around amidst a spray of water and a moan of tires, a move that was aided by a wet road and a bit of experience.

For a moment, I thought about a side road but decided that was a bad idea. Then I considered the main road we were on and how fast they were coming, and that wasn’t such a good idea either. The only way I could see out of this problem was levitation of the car, and believe me, I was really concentrating on that, hoping I would find within me unknown powers of telekinesis. But nope.

Leonard hit the window button, rolled it down, hung out of the window, and pointed the pistol at them. Leonard is a so-so shot, and with that handgun and the rain and wind being like it was, I felt he had about as much of a chance of hitting that car as he had of farting a bird off a tree limb.

He fired twice, rapid succession. I glanced back. The lights were still coming. They probably had no idea he had a gun. He fired twice more. The SUV went sideways and tried to straighten, and then sparks flew up from underneath it.

Leonard had somehow hit the front right tire and they were dealing with a blowout, the tire rim slamming on the concrete.

The SUV swerved and tried to slow, but it was too late. It was all over the place, and then it went sideways and the taillights tipped toward the sky. It had fallen into one of the long, wet ditches by the side of the road.

From THE ELEPHANT OF SURPRISE. Used with the permission of the publisher, Mulholland. Copyright © 2019 by Joe R. Lansdale.

Dog Shows Are the Perfect Setting For Murder Mysteries 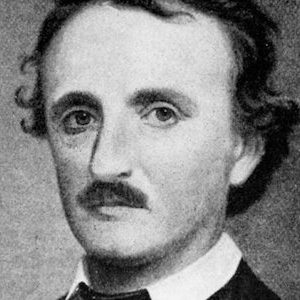 CrimeReads Brief: Week of March 9, 2019 A bizarre and violent home invasion reported by a man they called "The Baron," and the even more bizarre investigation...
© LitHub
Back to top