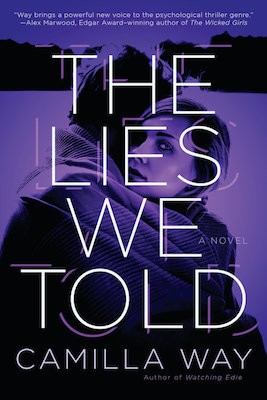 The following is an exclusive excerpt from The Lies We Told, by British crime writer and magazine editor Camilla Way. In the following passage, we meet a couple that, after many years, finally has the child they’ve longed for, and yet, they suspect they may be something not quite right with their beloved baby.

We waited such a long time for a baby. Years and years, actually. They couldn’t tell us why, the specialists. Couldn’t find a single reason why it didn’t happen for Doug and me. “Unexplained infertility” was the best they could come up with. You think it’s going to be so simple, starting a family, and then when it’s taken from you, the future you’d imagined snatched away, it feels like a death. All I ever wanted was to be a mum. When school friends went off to university or found themselves jobs down in London, I knew it wasn’t for me. I didn’t want to be a career woman, didn’t need a big house and lots of money. I was content with our little cottage in the village I’d grown up in, Doug’s building business; I just wanted children, and Doug felt exactly the same way.

I used to see them when they came back to our village for holidays, those old classmates of mine. And I’d see how they looked at me, with my clothes from the market and my lack of ambition, see the flash of superiority or bewilderment in their eyes when they realized I didn’t want to be exactly like them. But I didn’t care. I knew that what I wanted would bring me all the happiness I’d need.

And then, year by year, woman by woman, things began to change. They began to change. As we all neared our thirties, baby after baby began to make its appearance on those weekend visits. Of course, I’d been trying for a good few years by then, had already had many, many months of disappointment to swallow, but nothing hit me quite as hard as seeing that endless parade of children of the girls I used to go to school with.

Because I could see it in their faces, how it changed them. How overnight the nice clothes and interesting careers and successful hus­bands that had once defined them became suddenly second place to what they now had. It wasn’t the change in them physically, the milk-stained clothes or the tired faces; it wasn’t the harassed air of respon­sibility or the membership in a new club or even the obvious devotion they felt. It was something I saw in their eyes—a new awareness, I suppose— that hurt me most. It seemed to me as though they’d crossed into another dimension where life was fulfilling and mean­ingful on a level I could never understand. And the jealousy and de­spair I felt was devastating. Plenty of women, I knew, were happily child free, led perfectly satisfying lives without kids in them, but I wasn’t one of them. From as long as I could remember, having a family of my own was all I’d dreamed of.

So when finally, finally, our miracle happened, it was the most amazing, most joyful thing imaginable. That moment when I held Hannah in my arms for the first time was one of pure elation. We loved her so much, Doug and I, right from the beginning. We had sacrificed so much, and waited such a long time for her, such a horri­bly long time.

I don’t remember exactly when the first niggling doubts began to stir. I couldn’t admit it to myself at first. I put it down to my tiredness, the shock and stress of new motherhood, or a hundred other different things rather than admit the truth. I didn’t let on to anyone how wor­ried I was. How frightened. I told myself that she was healthy and she was beautiful and she was ours, and that was all that mattered.

And yet, I knew. Somehow I knew even then that there was some­thing not quite right about my daughter.

And yet, I knew. Somehow I knew even then that there was some­thing not quite right about my daughter. An instinct, of the purest, truest kind, in the way animals sense trouble in their midst. Secretly I would compare her with other babies—at the clinic, or at Mother and Baby clubs, or at the supermarket. I would watch their expressions, their reactions, the ever-changing emotions in their little faces, and then I’d look into Hannah’s beautiful big brown eyes and I’d see nothing there. Intelligence, yes—I never feared for her intellect—but rarely emotion. I never felt anything from her. Though I lavished love upon her, it was as though it couldn’t reach her, slipping and sliding across the surface of her like water over oilskin.

At first, when I finally voiced my concerns to Doug, he’d cheer­fully brush them aside. “She’s just chilled out, that’s all,” he’d say. “Let her be, love.” And I’d allow myself to be reassured, telling myself he was right, that Hannah was fine and my fears were all in my head. But when she was almost three years old, something happened that even Doug couldn’t ignore.

I was preparing breakfast in the kitchen while she sat on the floor, playing with a makeshift drum kit of pots and pans and spoons I’d got out to entertain her with. She was hitting one pan repeatedly over and over, the sound ricocheting inside my skull, but just as I was mentally kicking myself for giving them to her, the noise suddenly stopped. “Hannah want biscuit,” she announced.

“No, darling, not yet,” I said, smiling at her. “I’m making porridge. Lovely porridge! Be ready in a tick!”

She got up, said louder, “Hannah want biscuit now!”

I crouched down to rummage in a low drawer for a bowl, and didn’t hear her come up behind me. When I turned, I felt a sudden searing pain in my eye and reeled backward in shock. It took a few moments to realize what had happened, to understand that she’d smashed the end of her metal spoon into my eye with a strength I’d never dreamed she had. And through my reeling horror I saw, just for a second, her reaction: the flash of satisfaction on her face before she turned away.

I had to take her with me to the hospital, Doug not being due back for several hours yet. I have no idea whether the nurse in A and E be­lieved my story, or whether she saw through my flimsy excuses and assumed me perhaps to be a battered wife, just another victim of a drunken domestic row. If she did guess at my shame and fear, she never commented. And all the while, Hannah watched her dress my wounds, listened to the lies I told about walking into a door, with a silent lack of interest.

Later that evening when she was in bed, Doug and I stared at each other across the kitchen table. “She’s not even three yet,” he said, his face ashen. “She’s just a little girl. She didn’t know what she was doing. . . .”

“She knew,” I told him. “She knew exactly what she was doing. And afterward she barely raised an eyebrow, just went back to hitting those damn pots like nothing had happened.”

Excerpted from THE LIES WE TOLD, published by Berkley, an imprint of Penguin Publishing Group, a division of Penguin Random House, LLC. Copyright © 2018 by Camilla Way. 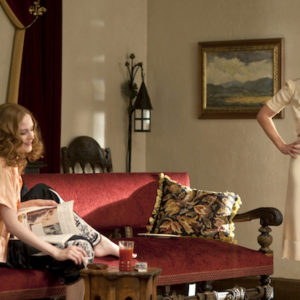 The Mother Archetypes of Crime Fiction There are precious few happy kids of loving mothers in crime fiction. Perhaps that’s inevitable, since crime fiction shows...
© LitHub
Back to top