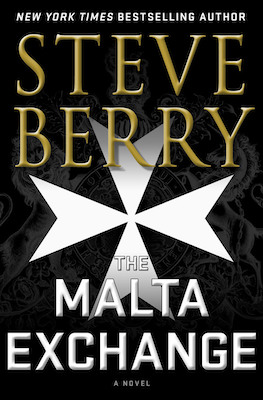 The following is an exclusive excerpt from The Malta Exchange, Steve Berry’s latest international thriller to feature former Justice Department agent turned freelance operator Cotton Malone, who is hired by MI6 to dig up secret letters exchanged between Churchill and Mussolini. Here, he destroys a World Heritage Site in the name of the mission.

Cotton hopped from the helicopter. They’d landed right in the middle of the Stadio di Marmi, the Stadium of Marble, on a carpet of thin green grass. Benches for twenty thousand encircled them, just beyond a six-lane running track. The shadowy outline of colossal statues ringed the stadium’s upper edge, like something out of ancient Greece or Rome.

The rotors wound down as they made their way for the exit. Gallo carried the heavy duffel bag, he and Stephanie following. The pilot waited with the chopper. This part of north Rome seemed wholly deserted at such an early-morning hour, the entire Foro Mussolini, or Foro Italico as it was now called, quiet.

They exited through a ramp up, the stadium itself sunk in the ancient way with the top row of seats at ground level. Gallo led them toward a fountain adorned with a massive marble ball that spun on a bed of pressurized water. To their left stretched a wide paved expanse.

“The Piazzale dell’Impero. The Empire Way,” Gallo said. “A testament to fascist propaganda. One of the few left in the world. My brother would fully appreciate its audacity.”

Amber lights lit the way, both sides lined with stout blocks of white marble. The avenue itself was all mosaic tiles forming maps, fasces, and sports images along with prophetic slogans. As they walked Cotton read a few. dvce. Leader. dvce a noi. Leader with us. molti nemici molto onore. Much enemy, much honor. dvce la nostra giovinezza a voi dedichiamo. Duce, we give you our youth.

“This place was part training ground, part metaphor,” Gallo said. “Mussolini hoped that sport and physical strength would secure Italy’s place in the world. Entangling athletic and martial glory was central to fascism. My brother likes metaphors, too. He thinks reminding everyone of the Catholic past will somehow secure the future. As with the fascists, intertwining fear with ignorance is key to what my brother has in mind for the church.”

“He’s my identical twin, there’s a bond between us, and I do love him. But thankfully, I’ve always been able to separate those emotions from how I feel about him as a cardinal of the church.”

He knew little about Brother Gallo and nothing at all about Cardinal Gallo. But these two men definitely had issues.

“Anything from Luke?” he asked Stephanie.

She shook her head. “Nothing.”

At the far end of the avenue stood the obelisk. No lights directly illuminated the white marble, which seemed fitting. It existed, but no effort was made to overly glorify its existence. Lights ringed a perimeter twenty feet away, angled up to the stars. Its style was likewise nontraditional, a series of irregular-shaped stepped stones rising upward to a tall, central pillar.

“They cut it from a single block,” Gallo said. “Then encased it in wood and iron and floated all three hundred tons by the sea and the Tiber to here. It took three years to carve and stand upright. All thirty-six meters. Every step was documented and reported by the fascist press, extolled for the masses to worship and appreciate.”

Interesting how dictators required shows of greatness as a way to prove they were entitled to power. Democratically elected leaders never had such a need since the people themselves vested them with power, and no one expected perfection. In fact, failure could be another stepping-stone to greatness. Dictators never accepted failure. They preferred to have their mistakes forgotten, overshadowed with spectacle.

They approached the obelisk.

Gallo pointed upward. “Notice the letters in the inscription.”

He studied them in the dim wash of light. All uppercase, arranged vertically, mvssolini on the spire, dvx beneath, each one over a yard high. “They are incised rather than sculpted,” Gallo said, “to prevent abrasion or removal. Il Duce thought ahead. He made them too large and too deep to ever be removed.”

Ironic, Cotton thought. Similar to memories of fascism itself, which still seemed to linger in the 21st century.

They circled the monument.

Its marble was devoid of any other markings save the words opera balilla anno x carved into a tall panel at the base.

“The fascist youth organization Opera Nazionale Balilla immortalized itself, too,” Gallo said. “Youth Organization Balilla. Tenth anniversary. The obelisk was dedicated on November 4, 1932, the tenth anniversary of the march on Rome and the start of the fascist regime.”

“It’s amazing the thing is still here,” Stephanie said. “Every relic related to Hitler has been excised. Mussolini, though, seems different.”

“Somebody tried to blow it up in 1941, but barely did any damage. People have suggested razing it for decades. But the Italians have never needed to delete their history.” Gallo motioned at the obelisk. “Even if it’s sometimes overdramatic. To them, destroying a monument like this is only a sign of weakness, of fear, not strength.”

He continued to study the towering structure.

Dictators never accepted failure. They preferred to have their mistakes forgotten, overshadowed with spectacle.

“We know Mussolini placed his codex inside,” Gallo said. “Newspaper accounts from the time make no mistake of that fact. But no one knows where he placed the codex. It was done in a private ceremony, and no accounts have survived. As you can see, there’s only one stone outside the central pillar with markings on it. The best guess is that the codex is behind it. What do you think? That marble has to be five centimeters thick.”

And the panel that bore the words opera balilla anno x measured about eight by four feet. A stout, solid stone rectangle built to last. And it had. For eighty years. He knew what Gallo wanted, so he climbed up on the four-foot-tall raised base and examined the large incised x—part of anno x—which had been intended as a reference to ten years of fascist rule. “How about x marks the spot?”

“Seems as good a place as any,” Stephanie said.

Gallo unzipped the duffel bag and removed two sledgehammers and a flashlight. Cotton accepted one of the sledgehammers, and Gallo climbed up with the other.

Stephanie held the flashlight from below.

He nearly smiled at the irony. How many times had he damaged a World Heritage Site. Too many times to count, all just unfortunate occurrences. Now here he was about to intentionally deface a part of history.

He gripped the sledgehammer and swung.

The business end smacked the x hard. Gallo followed with a blow of his own. But the marble held firm.

They repeated the blows.

“Did you feel that,” Gallo asked. “There’s a little give. It could be hollow behind.”

Stephanie aimed the flashlight at the x. Fissures had begun to spider-web in all directions. Cotton glanced around and still saw no one. He wondered about security cameras. There had to be some. Yet no one had come to the obelisk’s defense.

They resumed the assault.

He and Gallo stepped back as chunks fell, creating a cloud of white dust. As they’d suspected, a small hollow niche loomed behind the outer wall. He laid the sledgehammer down and waited for the dust to settle. Stephanie handed him the flashlight.

He saw a metal tube, about two feet long and six inches wide, lying inside, a fasces etched into its dull exterior. Gallo reached in and removed the container, bringing it out to the base’s edge.

“How do we open it?” Stephanie asked.

“They made them of lead and soldered the ends,” Gallo said. “We should be able to break the joint. The idea was to be able to retrieve what they’d sealed away. I brought a rubber mallet, there in the bag.”

“You know a lot about these things,” Cotton noted.

“We’ve studied Mussolini and the fascists for a long time. We’re hoping what we’ve been searching for is inside this repository.”

She handed up the mallet. Gallo gently worked one end of the sealed tube, cracking his way around the soldered joint.

“They used a soft material and a light solder on purpose,” Gallo said. “But keeping it airtight was essential.”

The end cap gave way and Cotton shone the flashlight inside to see something rolled up.

Gallo unrolled the sheet, which measured about eighteen inches wide and two feet long. Black ink filled one side of the handwritten page. At the top were the words codex fori mussolini. But what caught their collective attention was what had fallen free as Gallo unraveled the document.

From THE MALTA EXCHANGE. Used with the permission of the publisher, Minotaur. Copyright © 2019 by Steve Berry. 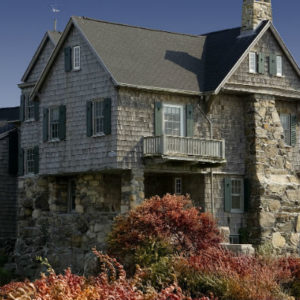 Sometimes We Haunt Our Own Houses Fiction is full of haunted houses—go to the horror section of any bookstore and you can get your fill of ghostly apparitions...
© LitHub
Back to top