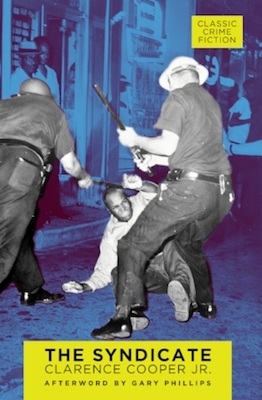 The following is an exclusive excerpt from The Syndicate, a mid-century noir from 1960 by Clarence Cooper, Jr., an African-American crime writer from Detroit. In the following passage, the narrator—an enforcer for a menacing group known only as the Syndicate— has just arrived in Hollisworth, a fictional town on the California coast, where he is intent on tracking down three men suspected of stealing the organization's money.

Hollisworth is no burg; it’s a solid little city, with the exception that it belongs to the syndicate, lock, stock and barrel.

It has a roller rink, city hall and PTA setup, but it also has gambling, dope from the sea and four efficiently-run whore houses. There was no discord and no hue and cry from the citizens, because those individuals who remained healthy in Hollisworth didn’t make it any different.

Lou Pulco told me that I could consider the town mine when I arrived, and he wasn’t far from wrong. On arrival, I was met at the airport by the manager of the Hollitop Terraces and given a suite on the twelfth floor.

Everything was lavish and class, nothing like those two­ grand bumps, where I had to give up maybe fifteen hundred to keep the cops off my back after the rub was over. This was my big chance.

Lou had given me a down payment of twenty-five hundred, with seventy-five on delivery, and, brother, I had a lot of things mapped out for that ten grand.

The money, that’s what was so important now! After leaving Tina at Lilly’s, I went back to the Hollitop to pick up my equipment, a .32 automatic, thinking of Benedict, the first of three parts.

From upstairs I had the desk clerk call up one of those auto rental services, and by the time I got downstairs some little jerk was just pulling up front in a black Impala.

“How far’s Blue Haven from here?” I asked him.

“Let’s see. Go north about ten miles and turn right on 43, the intersection. Can’t miss it. It’s the first forest you get to, right in the middle. Just keep going until you see a bunch of trees, that’s Blue Haven.”

“Hey, mister, you’re not going there to visit someone, are you?”

“What business is it of yours, punk?”

“None, mister. I just meant that it’s almost twelve-thirty. Visiting hours are over at Blue Haven at nine p.m.”

I drove off in the direction he indicated. It didn’t make much difference whether visiting hours were over or not. I wanted to know if Benedict was there, if he actually had the nerve to come back, to be so close, to Hollisworth.

I drove for about fifteen minutes, the countryside and the edge of the sea luminously dark, sparkling around the borders like currents of electricity.

When I made the right on 43, I could see the cluster of trees the boy had told me about in the distance. When I pulled up, I had to get out and open the gates of the joint myself. A whitewashed drive twisted through a valley of willows to a large white centerpiece, with a flying white marble cherub, and sitting smack in back of it was the main building, with a garish neon sign as big as any I’ve seen in Vegas.

I pulled the Chevvy around in front and got out. The doors were revolving, even, and the reception chamber was as big as the lunch room in Grand Central. Subdued fluorescents peeked over the ceiling’s ledge, and the lights bounced off the face of the cute little blonde behind the switchboard just right.

“May I help you?” She smiled, and I had that feeling again. Why the hell did every woman look like Carolyn to me now?

She got up and switched her wide ass around to the register. “I’m sorry, sir, but I see no Al Benedict listed. Could it be another name?”

“Did you want to leave something? We have no visitors after nine p.m., you know.”

“A friend told me he was here,” I said. “He’s the kind of guy who doesn’t like to leave his real name when something’s wrong with him. I’m sure he’s here under another name.”

“I’m sorry, sir, but I can’t find a Benedict anywhere in our records.” She flickered her big eyes at me. “Are you sure that’s who you want?”

“Positive,” I said, almost convinced that Tina had given me a bum lead. Then I had an idea. “What about a Meadows? Do you have a Meadows listed?”

She flipped through the files again. “Yes sir. In 309. Mr. Charles Meadows, entered by a Mrs. Tenna Meadows.”

“Yes sir. But you wouldn’t be able to visit him until later today. One o’clock is our first visiting hour.”

“Thanks very much. I’ll come back.”

I started out, but there was something about her, her body and eyes, that made me come back.

“You must get pretty lonely here on nights,” I said.

She smiled up at me shyly. “Sometimes it gets pretty monotonous, I must admit.”

“Nobody here but you?”

“No sir. We have a full staff on nights. An intern is usually on duty here in front, but it’s coffee break time right now.”

That was convenient for me. “Thanks,” I said and went out. I took the Chevvy down the road toward the gate about two hundred yards, got out and came back.

The sanitarium was a modernized Elizabethan structure, with a broad conical on the fifth and final floor. I went around to the side and found just what I was looking for, the fire escape. I pulled the ladder down and went up quickly to the third floor, where the escape exit was a window leading into the main hall.

I took the .32 out of my breast pocket and tried the lock. The door was open.

I crawled in and went down the hall until I found room 309. I took the .32 out of my breast pocket and tried the lock. The door was open. I slipped in noiselessly. The lights were out and the only illumination was the starlight spray from the night sky.

In one corner was the bed. I went over and found the night lamp.

The light that washed across the bed shocked the occupant to wakefulness. Blood-reddened eyes swept over me frantically, and I could see the fear. I knew this was Al Benedict.

“Lou Pulco told me to come around and look in on you.” I took the .32 and put it on a level with his eyes.

“You know why you gotta die, Al?” I said softly. “You and Cassiday and Horvat did something the big man don’t like, plus he don’t like people cracking his private safe. He’s mighty angry about that. He wants to know how you three guys got those plans. He wants to know where the dough is. And he wants you dead . . .”

I went over and flicked out the lamp. When I came back I could hear his frightened breathing. I put the .32 in my pocket and made my hands go toward the sound of his breathing until they touched his clammy flesh, his throat, then I began to squeeze, harder and harder, ending the first of three parts . . .

I went down to the sea after that. I don’t know why, I just did. I felt good all over after what I did to him. I felt especially good because Benedict reminded me of a guy I used to know a long time ago, a brain doctor on Ellis Island.

I was hooked for some caper then, I don’t know what, but I wasn’t much more than a kid.

“Have you ever had nasty thoughts about your mother?” this brain doctor asked me, and I got so goddamn mad I didn’t stop until I had my thumbs hooked up in his nostrils and he was screaming murder.

Those saps! They really thought I was nuts after that.

Those saps! They really thought I was nuts after that. But it wasn’t that. It was the money, wasn’t it? Money was all there was to depend on; it was like going to bed with a woman. You never got tired of it. The money, the money.

“I don’t know why I love you, Andy,” Carolyn’s voice said from the sea, and it was almost like she was sitting right there in the car with me. “You’re horrid and brutal and a murderer. You’re killing more than one person when you kill, don’t you realize that? You’re trying to kill that thing within you!”

“And you died,” I said, clenching my fists and screaming at the sea. “You dirty bitch . . . you went and died on me!”

I got out of the car and ran down to the edge of the water.

It was morning when I got back to Hollisworth. The only thing moving was an old intercity bus. My watch said 3:30, but it had stopped somewhere along the line.

One Crime Novel for Every Country in the World Cup 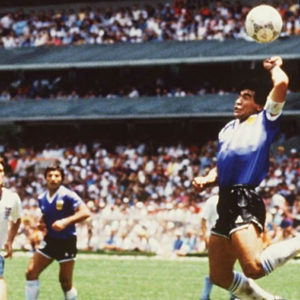 One Crime Novel for Every Country in the World Cup If you're anything like us, major world sporting events come around every two to four years and you wonder, which of the various...
© LitHub
Back to top