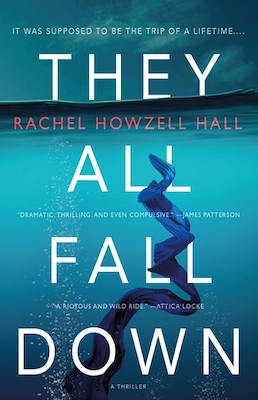 The following is an exclusive excerpt from They All Fall Down, an ode to Agatha Christie and the latest standalone from Rachel Howzell Hall. When seven strangers are invited to stay at private estate on a remote island in the Sea of Cortez, Miriam is eager for the trip of a lifetime. But when the guests begin to turn up dead, they are awakened to the false pretenses of the invitation.

No one asked me if taking my daughter to the other side of the country was fine. Also? I wasn’t jealous of Ashlee—being jealous meant that I wanted what she had. And I’d had Billy, and he wasn’t that great. He smelled like Novocain, didn’t like Star Wars, sighed more than he laughed, and would never order chicken or use hot sauce in public. He criticized my clothes (too flashy) and lamented that I never cooked quinoa and couscous and sushi (your food is so boring). I needed to exercise more (140 pounds, what a cow) and wear less makeup (no thinking man likes all that war paint).

William Macy had killed my spirit with his own lack of imagination and his surplus of criticism, even before the Bad Times. Let the dance teacher (Morgan’s dance teacher, of all the women in the world to cheat on me with), let her have him and his tiny . . . Billy.

My next act would involve a larger man—in every way. A man who enjoyed hot wings on one night and a dry-aged rib eye the next. A man who ran the trail beside me and realized and accepted that the layer of fat around my belly was neither offensive nor an accessory that I could put on or take off. My next act would involve a man with a lot of commas on his bank statement—because I’d married for love already and it had left me poor and alone.

For the most part, dating after my divorce had been depressing. Daniel had thought he was funny, so funny that, at fifty, he’d quit his job as an IT senior vice president to pursue a career in stand-up comedy. His three jokes about computers had made me laugh, but the thirteen remaining minutes of his routine . . . Yeah. No. And Ethan the fireman had scared me. Literally. One date in, he snapped at me after I’d said, “Thank you” to our waiter. “Because you smiled as you said it,” he had explained. “Like you wanna sleep with him or something.” My last two dates had been with Josh, a showrunner for a cable series. He made me laugh, he didn’t kiss with his teeth, and he liked chili cheese fries and porterhouse steaks—and last month, his job had taken him to New York for who knows how long. Distance killed something that could’ve been.

My next act? Would be with someone like the older white man now wandering the waiting area. He moved with confidence and had the stride of a powerful attorney or a neurosurgeon or a minister. And now, his head of luxurious gray hair was bent over a stand of Mexican pottery.

Before going over to introduce myself, I checked my reflection in a makeup compact. My layered bob hadn’t moved—but my makeup . . . Gah!

The woman at the Estée Lauder counter had promised me that this foundation wouldn’t run, even in the most humid conditions. That was then. This was now, and now, butterscotch soup trickled down my temples and neck, then dripped onto the neck of my silk tunic. Melting, I’m melting, what a world, what a world. It was three hundred degrees with 100 percent humidity in Puerto Peñasco—I’d been here all of twenty minutes and I was already breaking the first rule of competition: letting them see me sweat.

Couldn’t save the blouse, but I dabbed at my face with a cosmetic sponge. Better. So much better.

Article continues after advertisement
It was three hundred degrees with 100 percent humidity in Puerto Peñasco—I’d been here all of twenty minutes and I was already breaking the first rule of competition: letting them see me sweat.

The posh-looking white man didn’t buy any Mexican pottery from the tiny brown vendor. Tchotchke-free, he crossed the lobby with his Louis Vuitton tote bag and matching suitcase (no story needed—it’s an LV) and sat near the door. He looked rich, yes, but he also looked sick. His slate-gray sports coat (He wore this jacket after he won America’s Cup . . .) looked like he’d borrowed it from a bigger man, and the eggplant-colored shirt (His consumption is conspicuous, he’d have it no other way) bunched at his shrinking waistline. That beautiful silver hair on his head . . . must’ve been a terribly expensive representation of his original head of hair. His yellow-tinged skin brought out the color of his eyes. Those eyes . . . they were the same violet hue as Elizabeth Taylor’s, and they now burned into me as I stood before him.

“Hi,” I said with my hand outstretched. “I’m Miriam Macy.”

“Ah. Yes. Wallace Zavarnella.” He gazed at my hand, then took a slow inventory: my face, silk slacks, the blouse stained with melted makeup, and my chunky necklace. “Dearest, did Dalí do your makeup? Because it’s very . . . melting clocks. Just being honest.” He finally took my outstretched hand with his fingers, barely pumped it before he dropped it. He sniffed, then lifted an eyebrow. “Do you smell eggs cooking? I smell eggs. That’s not you, is it?”

Don’t embarrass me on TV.

Anger flared in my gut and my grip tightened around my suitcase handle. So much for that cool jazz Valium high. So much for sharing a glass of wine with this man, and a kiss or two on a balcony overlooking the Sea of Cortez.

“I don’t smell anything,” I said, sweetly. “And yes, I know that my face is dripping—thank you for sharing that with all of North America. Anyway, I’m sailing to Mictlan Island, too.”

“Wonderful. Glad you could make it.” He took out an iPad from his tote, then glanced at his Patek Philippe titanium timepiece (Billy had a Patek Philippe and refused to call it a “watch”). He didn’t move his tote from the only available seat.

“Have you seen the others?” I asked. “I hear there are seven of us going over right now.”

Wallace grimaced and swatted at a fat horsefly buzzing near his hair. Old scars, pearly and faint, zigzagged across the life line and the meaty part of his right hand. “I’ve seen a few here and there, and between me and you and the flies? They look like they all belong on the short bus. But then, we’ll be joining them, which means that we also belong . . .” He gasped, then chuckled.

The device on his lap chimed. “There she is, finally.” He swiped at the iPad’s screen. “Miriam, I need to finish with last-minute arrangements. Reaching the island will take a few hours—forty miles of ocean. There’s no reliable Wi-Fi over there, so could you please excuse me? We’ll have hours to get to know each other, to talk each other’s heads off over old fashioneds and share stories of the good ol’ days back when Times Square was nothing but sex shops and drug dens and whatnot. It’ll be a blast. Promise. Thanks. You’re a doll.” And then, he crossed his legs and shifted away from me.

I had been dismissed.

Wow. Okay. So much for him being a part of my next act. So much for esprit de corps and camaraderie. Fortunately, after some skillful editing of this episode, Wallace Zavarnella would come off as The Bitch.

Chin high, I returned to my spot near the registration desk as heat and humidity, and the stink of old fish and dirty men, crushed me from all sides.

Over near los baños, a muscular, middle-aged white guy wearing vintage khaki cargo shorts and a vintage Red Sox baseball cap (Dad tossed it high in ’67 after the Sox won the pennant . . .) rummaged through each of his big black bags. He was a cop or a fireman, I knew that for sure. Random Red Sox like him had ticketed me for speeding or jaywalking, and a whole posse of Red Sox had investigated me for . . . that.

Nope. Move forward. Positive thoughts. I am the underdog.

I took several deep breaths, then forced a smile.

That’s when I spotted my real competition: a twenty-something-year-old brunette dressed in a blue stretch knit dress (Billie Holiday smiled at you from the stage and asked, “Where did you get that dress?” . . .) and a shades-of-blue scarf (When you waved good-bye to him at the port that day, you didn’t know that you’d never see him again). She plopped down in the seat next to Wallace Zavarnella—he had moved his tote bag for her. She wore perfume—I could smell it way over here. Smelled like cherry Laffy Taffy mixed with Johnson’s baby powder.

“I’m Desirée Scoggins,” she said to Wallace in a super-sweet, twangy voice as sickening as her scent. “But you can call me Desi.”

She’d only said her name, but I already hated her. The scarf around her neck, though, was gorgeous—it would go great with the yellow pantsuit now packed in my suitcase.

Desirée Scoggins glanced over at me and smiled. Pale skin. Lips too big for her face. Tiny eyes set close together. Almost double chin. Not pretty, not really. But America would root for Desirée Scoggins. They’d call her “America’s Sweetheart” or “America’s Darling,” anything with “America” in it. And she was still smiling at me.

So I tossed a smile back, then mouthed, “Hi.” Ugh.

At the end of the day, I didn’t come to make friends and swear that I’d be buddies with these people after the show wrapped. Nor had I come to play the stereotypical Angry Black Woman. Because I wasn’t angry. I was just over it. Even before reaching Mictlan Island and eating grubs as big as my head and standing on one foot atop a pole and competing in—and winning— other ridiculous challenges, I was already over it. Still, I’d smiled at Desirée Scoggins and had mouthed, “Hi,” and thrown in a wave because I’d made a promise to my daughter.

Don’t embarrass me on TV.

I wouldn’t give America one reason to root against me. Nope. 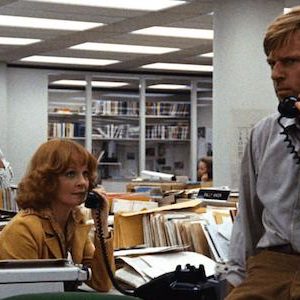 CrimeReads Brief: Week of April 13, 2019 How the famed Pinkerton detectives are setting themselves up to thrive and profit in the upcoming era of climate...
© LitHub
Back to top