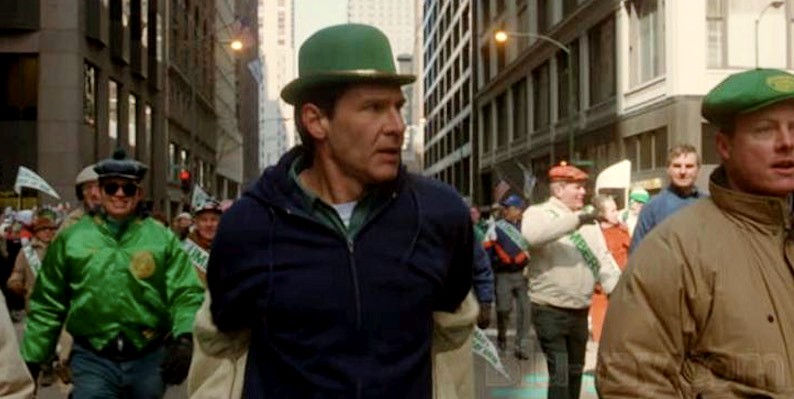 Most people don't realize that the beloved thriller is a "Saint Patrick's Day movie," or even what that means, but it is. Oh, it is.

I don’t know why the 1993 thriller movie The Fugitive sets one of its most dramatic chase sequences in and around Chicago’s Saint Patrick’s Day parade. Probably just because it’s cool, it’s a cool scene, there’s nothing more to it than that. I do think it might be over-reading to suggest there’s some sort of allegorical connection between the story of Dr. Richard Kimble, the falsely-accused prison escapee hunting for his wife’s murderer, and the story of Saint Pádraig, the fifth-century Christian bishop who turned walking sticks into trees and fixed Ireland’s alleged snake problem. (And who was probably a fraud on the pest-control front, honestly, since there were zero snakes in Ireland long before he showed up, what with Ireland not actually having any indigenous snake species. Now what Ireland has a lot of is the common lizard, but I guess his excuse was that his powers only worked on one type of land reptile. Anyway.) I have thought a lot about it, and there is no real, thematic reason for The Fugitive to be set during Saint Patrick’s Day. But that doesn’t mean it’s not a Saint Patrick’s Day movie!

Now, “a Saint Patrick’s Day movie” probably sounds like a lighthearted affair that you can put on or watch in a bar while you drink a lot with friends. Actually, that sounds right… that is the best definition of what that category is, and I hadn’t thought of that when I initially conceived this argument. Okay, so, now let me add that I guess there are two kinds of “Saint Patrick’s Day movies” and one of them is fun to watch while consuming alcohol in a group, and the other is really bleak and makes you feel freezing cold. There are few movies that feel colder, and seem to thirst for springtime more desperately, than The Fugitive, a movie whose action involves running through snow, and splashing through frosty puddles and inside giant water main pipes, and occasionally even involves swimming (and almost getting hypothermia) in icy river rapids. My feet are cold right now, just thinking about it.

But “cold” is how I feel on Saint Patrick’s Day, a day of apparent festivity and celebration which, where I live in New York City, everyone actually spends freezing and bundled up and wishing so badly that it were warmer. Or they spend it indoors. The thing I think so often during The Fugitive is, damn, why did all of this stuff have to happen to Chicago-based surgeon Richard Kimble in March?

The story starts earlier, in true winter. Richard (Harrison Ford) arrives home late one night after attending a black-tie gala and then running to an emergency surgery, to find his wife Helen (Sela Ward) brutally maimed and clinging to life. He also finds her assailant, a one-armed man whom he fights, before running to tend to Helen. She has dialed 911 and is trying to physically speak into the phone when Richard runs in. Tragically, she dies. Her killer has fled, and Richard is covered in her blood, plus she has said his name over the phone to 911. All of this looks super suspicious to the belligerent Chicago officers on the case, who arrest him. He is found guilty of murder, and for the brutal nature of the crime is sentenced to death. But on the way to the prison, his transport vehicle is hijacked by some of the inmates inside and it crashes onto train tracks, allowing Kimble a shot at escaping. He’s not going to squander this last chance, and is determined to begin to find evidence to clear his name, and bring his wife’s real killer to justice. Things become vastly more difficult, however, when a veritable bloodhound of a U.S. Marshal, Samuel Gerard (Tommy Lee Jones, in an Oscar-winning performance), is assigned to lead the manhunt to find and capture him.

The film, directed by Andrew Davis and written by Jeb Stuart and David Twohy, is based on the television series of the same name, which was created by Roy Huggins and which ran for 120 episodes from 1963 to 1967. Interestingly, the show’s first episode takes place in Tucson, Arizona, which is a warm place. It’s at least warmer than Chicago before the vernal equinox, which is my point. So, AHA, we can divine that the 1993 film’s wintery setting is not a coincidence. It might seem very simplistic to point out, yes, but it is a nice touch how The Fugitive allows Chicago to get warmer while Richard Kimble’s search for the one-armed man does too. Maybe, at the risk of seeming a little maudlin, the increasingly warm weather also signifies… hope. Shut up, I love this movie.

We don’t really realize what time of year it is, though, UNTIL we see the Saint Patrick’s Day parade. Heretofore, the setting has just been “Chicago, and it’s cold.” On Saint Patrick’s Day, Richard has gotten so close to finding the real killer, winnowing down suspects from a list of men who have received prosthetic arm replacements that he has acquired from sneaking into a hospital, when he heads into a jail to see if he recognizes this man from the night of his wife’s murder. Samuel Gerard and his team of likable Marshals are close behind, though, and, when they pass inside the facility, the wily Gerard tricks Richard into revealing his true identity by calling out his real name, causing Richard to startle and look up. Then, the chase is on—the two men running breathlessly down marble staircases, with Richard awkwardly jumping through closing plexiglass doors and limping out into the bright Chicago afternoon. (One of the best parts of Harrison Ford’s performance is that there is no suggestion he has done any action scenes before, which is amazing given how much this scene resembles SEVERAL from the Indiana Jones films.)

Outside, the parade is already underway (so it must be after 12 pm). Throngs of people in green hats and sashes are following behind large floats and costumed performers. The Chicago River, we have already seen from a bird’s-eye establishing shot, has been dyed bright green, as is the city’s mystifying and disgusting custom. (The crew filmed during Chicago’s actual parade, as did the team for the film Blink, and apparently the two camera teams had to coordinate between them to make sure they didn’t film one another.) Richard hurries into the crowd, shaking off his coat and donning a plastic green bowler hat to blend in. Gerard and his team scatter and try to find him, but they lose him, with Gerard even jumping up and down to try to catch a glimpse. My dad, who also adores this film, likes to point out that the crowd at this parade isn’t THAT thick, so HOW does Richard Kimble manage to vanish into it and leave a frustrated team of expert pursuers standing on tiptoe in his wake? My answer is simple: it is Saint Patrick’s Day, a magical day where, legend has it, snakes evidently materialize in places far outside their natural habitats, so they might be expelled from the land. Miracles can happen on Saint Patrick’s Day, and everybody knows this.

Weather conditions, and magical realism, aside, I love this scene primarily because its central spectacle (which is so grandiose that it literally helps conceal a fugitive on the lam) is so quotidian, too. Chicago does this every year. It’s an event. Thousands of people are marching through the streets, unaware that there is a nationally wanted fugitive winding among them. The Fugitive is very good at showing characters whose lives have NOT been totally upended by Kimble’s situation, alongside his own desperate attempt to repair his ruined life; he frequently visits doctor friends, for example, who have not been accused of murder and are therefore still able to go about their research. But the parade is an enormous demonstration of life continuing as it always does, even when visited by an interloper wanted by the government.

Though Kimble has blended into the crowd, and its temporary social homogeneity has saved him, scenes like this isolate him even more. He’s not enjoying the revelry, like everyone else. While the parade subsumes him, it also reveals how separated he is from society, that all the “watching” he does here is to watch his back. Still, I find it interesting that the parade saves him. As the Russian literary critic Mikhail Bakhtin says of the “carnival,” Chicago’s Saint Patrick’s Day Parade is a locus where the behavioral rules and attitudes of normal life temporarily do not apply; they are warped or lifted for a short while, in this place where church and state collide. In this way, then, the carnival’s bending society out of shape is ultimately what permits Kimble’s escape, when, ordinarily, it is society’s very construction that had permitted both his incarceration and his pursuit.

All of this is not to say that The Fugitive would not lend itself to an excellent drinking game during a Saint Patrick’s Day celebration (take a shot every time Gerard makes a joke about Newman’s hair), but that Saint Patrick’s Day itself (especially in Chicago, jeez) is such a fantastic example of the social world we live in, as humans. What’s more reflective of the construction of “society” than its days off, its holidays? And this holiday in particular, which bends social norms so much, turning an entire city-center upside down and even changing a river to an unnatural color! But gathering like this, to celebrate, is still a natural occurrence. The citizens around Kimble, people who marched in the real life parade, gathered in the freezing cold with family and friends to celebrate together, after a long winter of being cooped up, waiting not to have to wear like thirty coats and four pairs of socks to do so. It’s the first suggestion of a season in which it is possible to gather together, once more.

There are a lot more sophisticated possible readings of this film, but I’m not here for that: I want to talk about the parade. I’ll simply add that, all Richard wants is to rejoin society again, to have freedom. And nothing, I say nothing, symbolizes that more than being able to walk around in a crowd full of people dressed as leprechauns without having to look over your shoulder for Tommy Lee Jones. 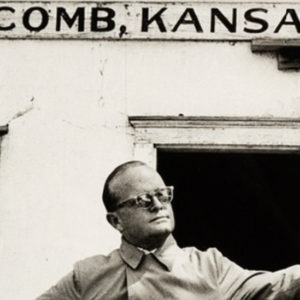 Just west of Holcomb, Kansas, on the lonesome wheat plains In Cold Blood begins with, stands the world’s largest slaughterhouse....
© LitHub
Back to top