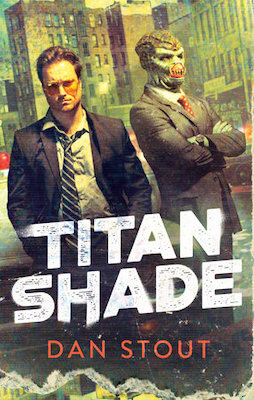 The following is an exclusive excerpt from Titanshade, a debut noir fantasy thriller by Dan Stout, in which an amphibian species called the Squibs offers to invest in an oil boomtown called Titanshade to save it from going bust. But when the gruesome murder of a Squib diplomat derails negotiations, it is up to a single homicide cop to protect the future of Titanshade.

When I rolled into the Bunker, it was busier than I’d ever seen it. Reporters clustered outside, waving hands and asking for quotes, and in the hallways a buzz of excitement ran through the staff. In the Homicide department all non-police personnel were banned from the floor as Captain Bryyh called us into a large open area ringed by desks, the Bullpen where homicide cases were organized and duties distributed.

We packed in, two dozen bleary-eyed detectives in rumpled suits and ties. Except for Angus, of course. He looked like he’d stopped at the dry cleaners on the way to the office.

Captain Bryyh stepped into the middle of the circle, a gas station coffee in one hand and a manila folder in the other.

“All right, all right. Cut the noise already.” Her tightly braided hair had long since gone to gray, and a pair of reading glasses perched on her forehead.

“You all know what we’re here for.” The last of the background noise dropped away. “The Squib killing is this department’s A1 priority. All—and I mean ALL—available resources are to be redirected to this case until otherwise ordered. Detective Kravitz is on point.”

She motioned to a tall man with a lengthy beard who inclined his head in acknowledgment. Bryyh continued, “All roads lead through him, got it?”

There was a gentle murmuring, to which I added my own grunt of assent. Kravitz was a competent detective, maybe even good. He excelled at being even-tempered and thorough, and he had the organizational chops to run a big investigation. Of course, the fact that he’d just closed a big case didn’t hurt. The Reynolds case was something he could hang his hat on. Even if I was the one who’d done all the footwork. But I told myself it didn’t matter who got the credit, or the promotions, as long as the bad guys got locked up. And it had the bonus of stripping Angus of his lead detective status.

Bryyh deferred to Kravitz for the case brief, a summary for anyone who didn’t already know the basics. The victim was a Squib environmental scientist named Garson Haberdine. Middle-aged, no known criminal habits. Last seen by hotel staff earlier that night. The security tapes had been confiscated and would be reviewed shortly. None of this was news to me, and I thrummed my fingers while I waited to hear something I could use. I thought the findings of the DO would be next on the agenda, but there wasn’t so much as a peep about them. Instead, Kravitz looked up from his report and chewed on his beard.

“Haberdine was a member of the Squib delegation negotiating the wind farm project.”

The room was silent. With each oil well that went dry, the city’s economic position grew shakier. The mayor’s office, along with the feds, was desperately trying to set up foreign investors to fund alternative energy options. The only plan that had gained any traction was converting the oil fields to wind farms. But building all those turbines would require a massive influx of cash, and the Squibs were the only interested party with deep enough pockets. If this murder derailed the talks, Titanshade could be reduced to a ghost town within a generation.

“Expect press coverage on this one, ladies and gentlemen.” Bryyh paced a tight circle as she spoke. “So remember the three Bs. Be polite. Be professional. Behave in public.” She scanned the crowd but got no dissent from us.

“I’m not going to lie. There is strong political pressure on this case. We are going to present a unified face to the city and to the Squib delegation. To that end we will be working in pairs. One human, one Mollenkampi.” That caused a stir. Detectives got to work alone. It was a perk of the job.

I looked to my right and made eye contact with Angus.

Oh, Hells, I thought. Across the room, Angus rolled his eyes. At least he didn’t want this to happen any more than I did. But at that moment, it seemed all but inevitable.

Article continues after advertisement
“I’m not going to lie. There is strong political pressure on this case. We are going to present a unified face to the city and to the Squib delegation. To that end we will be working in pairs. One human, one Mollenkampi.”

Bryyh read the first pair of names. “Coriander and Jenkins.”

A human and Mollenkampi raised their hands, glanced at each other, and looked back at the captain.

“You’re sorting through the tips.”

High-profile cases saw hundreds of tips flood the call center. This one would likely break all previous records. I shot Jenkins a jealous look; I’d have gladly worked my way through an encyclopedia’s worth of tips if it meant I didn’t have to spend an extra second playing nice with Angus.

Bryyh kept working her way through the list of pairs. “Andreeson and Torvold . . . Robinson and Alonso.” Finally she came to me.

My esteemed colleagues chuckled through mouthfuls of coffee. My reputation has always preceded me. Bryyh pointed at a young Mollenkampi who had only recently transferred to Homicide. “Ajax,” she said, “that would be you.”

I looked at my new partner. Like all male Mollenkampi, his name started with an A. That’s the reason some people called them Aholes. Well, mostly the reason.

Ajax returned my look with an expression I couldn’t quite identify. It took me a minute to place it, but as he rubbed the leathery plates along the side of his head I realized what it was. That snot-nosed newbie was wearing the same expression I had on my face when I thought I’d be paired with Angus. What little expectation I had for this partnership idea tanked quickly.

The captain finished the roll call of names, then began to hand out assignments. I pulled away from the larger group to introduce myself to young mister Ajax and see if we needed to establish the pecking order.

He greeted me with a polite “Detective,” and I returned the pleasantry as we sized each other up. He was young, even for a Mollenkampi, who were shorter-lived than humans. His face plates shone like soldier’s boots, and his nostrils flared slightly as we made eye contact. I had a few inches of height on him and I figured I could take him in a fight. That made me feel better. His eyes carried a certain confidence, and as he looked me over I could see him thinking he’d come out on top in that same hypothetical fight. That made me feel better, too. I like to be underestimated. I decided that if I ever needed to, I could fake an injury then take him out at the knees. You never want to hit a Mollenkampi in the face. As a general rule of thumb, never shove your hand in a blender, and don’t punch a Mollenkampi in the jaw.

Captain Bryyh pushed her way between us.

“You’ll have time to measure them later.” She handed me a manila envelope. “Carter, you still know the class acts south of the Estates?”

I nodded. There was a healthy sex industry catering to the off-duty roughnecks and their oil rig paychecks. The cops in Vice kept things from getting out of hand, but there was no shutting down the trade completely. I’d worked that department for three years before transferring to Homicide, and I didn’t miss it. Hunting down the average, runofthe-mill psycho is far less depressing than working sex crimes.

“Good,” said Bryyh. “The envelope has photos of three likely candies who were picked up on the hotel’s security footage.”

I tore open the package. From the top photo Talena Michaels stared back at me with sad eyes and pouty lips.

“Any of them look familiar?” asked Bryyh.

I slid the photos into my suit pocket. “These are fresh faces. None of them were on the street when I transferred out of Vice.”

Bryyh grunted. “Alright. Find out who they are and where to find them. Talk to them, their pimps, anybody potentially related. Type up a brief and send it to Kravitz.” Assignment delivered, Bryyh walked over to another pair of detectives who were giving each other the stink eye.

I adjusted my coat and glanced at my new partner. “If you’re ready, Ajax?”

He was already moving toward the door, a rolling stride that was barely interrupted when he called over his shoulder, “Call me Jax. It’s less formal.”

His voice harmonized as he spoke. Mollenkampi can create undertones in their biting jaws while speaking through their eating mouths. Their native language is tonal and musical, almost impossible for humans to replicate, which is why all the Mollenkampi on the force spoke our language. But some of them still used tonality as a matter of style.

The elevator slid downward, and I glanced at my new partner. Ajax wore a brown suit and tie not too dissimilar from my own. It occurred to me that we looked depressingly like twins. Well, apart from the six- inch tusks sticking out of his face.

He nodded. “Moved here a couple weeks ago. I was down in Kohinoor previous.”

“That’s to the south, right?” It’s an old joke. Everything’s to the south of Titanshade. He didn’t laugh. “How long since you made detective?” I asked.

“Just before I moved.”

Not only had I been given a partner, he was fresh off the bus with almost zero job experience.

A flash of recognition hit me. “You’re the one with hot hands.”

He squinted his eyes, one mandible curling in thought. “You were in the room? Angus made a big deal of keeping you out of there.”

“Not in so many words,” he said, pausing as the elevator’s ding announced our arrival in the garage. “But yeah. You weren’t supposed to be there.” He tilted his head in a slight salute. “But you got in anyway.”

I held the elevator doors open but didn’t leave the cab.

“You oughta know,” I said. “If you want your face in the papers, I’m not the person to be working with.” The smell of diesel and grease rolled in from the garage. “In fact, if you want a pat on the back from the brass, or even a healthy career, you shouldn’t be anywhere near me.”

He didn’t elaborate, and I’d pretty much tapped out my social skills, so I stopped talking and led the way into the garage.

We were assigned our car. It was standard issue: two doors with a small storage space that the marketing department at Hasam Motors insisted on calling a backseat. Cars tend to be small in Titanshade to accommodate the narrow, winding streets. That was fine in theory, but if we made any collars we’d have to call for a wagon to pick them up or ride back to the Bunker with a killer on our lap. I glanced at the dash and was happy to see that it had an 8track.

I took the keys from the attendant and twirled them around my finger.

“Feel free to call shotgun,” I told Ajax, and got behind the wheel.

From TITANSHADE. Used with the permission of the publisher, DAW. Copyright © 2019 by Dan Stout. 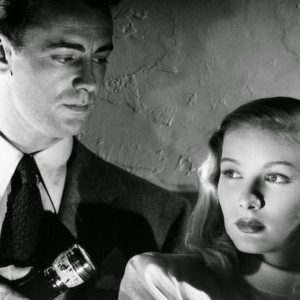