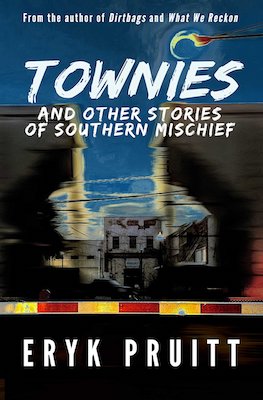 The following is an exclusive excerpt from the short story “The Murder Ballad of Samuel J. McCarthy”, included in Townies and Other Stories of Southern Mischief, a new collection of short stories from Eryk Pruitt. In the following section, a man on a walk in the woods finds more than he bargained for.

Despite weather warnings, Sam McCarthy woke up early, drank a cup of coffee, then started for his morning walk. He carried with him his trusty walking stick, a light jacket, and a hardened resolve that would not be swayed by cold, wet weather, or the threat of snow. Weathermen foretold winter storms to start anytime after noon, but McCarthy planned on returning long before that mess. The town panicked, of course, with news of impending weather and descended upon the grocery stores, stocking up on staples. However, it took more than a few flurries to dissuade Sam McCarthy when he had things to do.

His path took him across his old cow pasture, through his new one, then along the border of his cotton field, three months fallow.

From there, he’d turn on a trail that led him through his timber lots before eventually becoming a piece of forgotten property he’d once sold to the state. McCarthy walked this trail every day, determined to stay fit. He’d grown leaner with age; his skin stretched tighter over his face and body, exposing sinew and twisted muscle, his face hawk-like with eyes that saw well beyond what others could see.

As he approached the trailhead, he relied more on his walking stick, a varnished mahogany number topped with a gilded, heavy skull which he had named Hank. Those around town who bothered to speculate on Hank thought it named after the musician, while others conjured tales of an old lover from his pre-war days named Henrietta who may or may not have existed. But McCarthy had named that stick after a younger brother who’d died before they’d grown from boys, died long ago from a snakebite. McCarthy carried Hank everywhere—on walks, to the bank, around town—but rarely leaned on it in public, carrying it like a bandleader with baton rather than a cripple with cane.

McCarthy felt a tickle in his throat and knew he’d be hoarse by the day’s end. This weather could do that to a fellow. He preferred to “tough it out” rather than succumb to some idiot doctor and his drugs. He believed most people were unnecessarily frail. This had driven his wife crazy, but she had gone to her Kingdom a few years back and left no one to hassle him about doctors and pills and other whatnot.

This trail was root-strewn and still muddy from the wintry mix the night before. It weaved in and over Ten Mile Creek, which had once been called Awaneeta Creek, until McCarthy had renamed it, since “it runs through Ten Miles of [his] land and [he] wouldn’t have any features on this land be named by murderous savages, namely the Cherokee.” Once out of town, the creek would return to its rightful name on the official maps, even though locals in every hill and hollow knew it as Ten Mile. Word had it that McCarthy would bequeath every inch of his timber lots and unfarmable land to the state for a park rather than let it fall to his son, who McCarthy considered feeble and effeminate. There was little question when that happened, the state would soon purge Awaneeta Creek from history and memory to honor their fallen benefactor.

Few birds bothered with this weather, and the half-frozen river kept still. All the world was grey, quiet. Only faraway were there sounds—probably miles off, at the freeway—but they were as significant as shushes from a seashell.

If he heard them at all, McCarthy paid them no mind.

Barney Kerns entered the woods from the side opposite the river. He, too, walked deliberately, but was hardly the outdoors type. He knew well of Old Man McCarthy’s day-to-day affairs, and that knowledge could have come from anywhere: Pep rallies for the local high school football team that McCarthy boostered. Or down at the Farmer’s Grocery off FM 809, where he spent weekend mornings jabbering with other farmers over coffee on the way in to tend their land. Or at the dentist’s office, where Barney’s mother had been a receptionist.

Article continues after advertisement
Barney had chosen a knife rather than a gun. In this still, frozen landscape, the sound of a gunshot would send folks running. Barney could get close with a knife.

Had been. She’d not only been fired after a clerical error regarding one of McCarthy’s appointments, but the old man had made cruel and unnecessary sport at her expense for some time after. Yukking it up with old-timers outside the Winn-Dixie. Lewd comments after her at the concession booth during the homecoming game. The vitriol could have hinted at something more scandalous, but it was little more than a powerful man swatting a fly with a pickup truck.

But this was not why Barney chose to murder Old Man McCarthy. Barney crossed the half-frozen creek using the remnants of a long forgotten Eagle Scout conversation project, then quickly picked up his pace. The cold air laid across him like sheets and he’d chosen his jacket for the task rather than for its warmth. A lone hawk soared silently over the tops of the loblollies above him, but even Barney knew they’d find nothing in this weather. However, he knew not all hunters would quit the day without quarry.

Barney had chosen a knife rather than a gun. In this still, frozen landscape, the sound of a gunshot would send folks running. Barney could get close with a knife. He could stick the old man nine, ten times before he knew what happened. Barney could watch the life quit the bastard’s eyes. He would remind him of all the people lying up in Nokomis Cemetery that he’d soon be joining.

People like Ollie Churchill and Dean Hergenrader. McCarthy lived on a bend in one of Creechville Road’s many curves, and throughout the years, many careless drivers—some drunk, some plain stupid—had gone off the road and onto the old farmer’s property, a few times, nearly running into his house. One day, McCarthy’d had enough and erected a six-inch thick concrete barrier at the edge of his land. Kids called it Willard’s End, after the first person killed there. Dean and Ollie, two guys Barney had known since fourth grade, were the sixth and seventh. People pleaded with McCarthy to take down the wall, while he in turn demanded they stop planting crosses and leaving flowers on his property.

Or, further back, the young boys shipped home in bags from Vietnam because Mrs. McCarthy—rest her cursed soul—had flunked them in school, which sent them to the jungles rather than college or the tobacco fields. Barney could remember trips made by boys and veterans to get drunk and piss on her gravestone because their daddies or their buddies hadn’t come home. In the eleven years since she’d passed, the marker had to be replaced three times. Each time, McCarthy defied those vandals with a new stone, bigger than the last. Barney reckoned there was little recourse against a man like McCarthy, no matter how many graves he filled. To whom could he complain? McCarthy was the town’s treasurer, and had been for thirty-two years. After the town’s tide turned and the mill closed, McCarthy had more money and land than the banks in town, so his fortunes were tied to the whole of Lake Castor. No one bothered to oppose him in elections, nor did he need to campaign. No, thought Barney, there was only one way to handle a man like Samuel J. McCarthy.

From “The Murder Ballad of Samuel J. McCarthy” by Eryk Pruitt, included in the anthology TOWNIES. Used with the permission of the publisher, Polis Books. Copyright © 2018 by Eryk Pruitt. 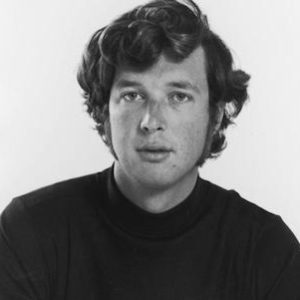 CrimeReads Brief: Week of October 28, 2018 "Women have always had an affinity for horror, they always have." How Hollywood reinforces the (false) perception...
© LitHub
Back to top