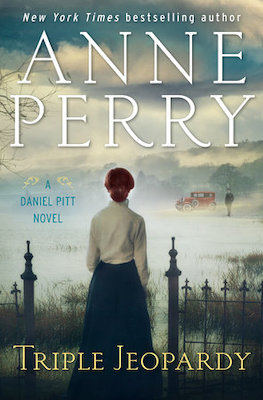 The following is an exclusive excerpt from Triple Jeopardy, the latest in Anne Perry’s Daniel Pitt series, set in 1910 and featuring the reluctant lawyer who would rather be a detective like his father. Forced to defend a British diplomat accused of assault and theft, Daniel begins to uncover the implications of his client's more serious criminal track record.

“There was another reason I came to England,” Patrick said after only a moment or two. It was as if he knew time would be short, and he had something to say that was very important to him.

“Oh? Something to do with me?” Daniel asked, trying to keep his voice friendly and noncommittal. He did not mention that he had noticed Patrick’s preoccupation.

“I want you to have something to do with it,” Patrick said, his voice already thickening with emotion. “I need to tell you the story from the beginning or it doesn’t make sense.”

“If Jemima comes out—”

“She wouldn’t,” Patrick said quietly. “But she cares about it, I think as much as I do.”

Daniel leaned against the trunk of one of the silver birch trees and waited.

Patrick cleared his throat. “One of the oldest and most socially important families in Washington is the Thorwoods. Not politically, but they are very highly thought of, and philanthropists to many good causes, especially to the police.” He hesitated, perhaps to see if Daniel understood their importance.

“They have only one child, a daughter named Rebecca,” Patrick continued. It was growing darker and Daniel could hardly see his face, but he could not miss the urgency in his voice. “She’s around twenty. She’s got money, position. She’s very attractive in a quiet way.”

Daniel wanted to interrupt and tell Patrick to get to the point, but with an effort he controlled himself. Patrick had said this would be a long story.

Patrick went on, his voice becoming more strained. “Just over a month ago, she woke in the middle of the night, in her own bedroom, to find a strange man there. He assaulted her, ripped a valuable diamond pendant off her neck, tore her nightclothes.”

Now Daniel was listening in horror.

He knew all the arguments for diplomatic immunity and for protecting the countless diplomats abroad, but it was certainly not meant to escape punishment for offenses like this.

Patrick’s voice was tight. “She screamed several times and tried to fight him. He struck her pretty hard. As he was fleeing, her father met him in the corridor and tried to catch him, but he escaped down the stairs. Mr. Thorwood went into Rebecca’s bedroom and found her hysterical, bruised, with minor cuts where the chain of the pendant had torn her skin. She was terribly distressed. I . . . I don’t know what else he may have done to her . . .”

Daniel could imagine it. It must have been terrible, unforgettable. “But how could I help?” he asked in some confusion.

“Tobias Thorwood recognized the man, because it was someone he knew,” Patrick replied. He was standing rigid now; this much was obvious even in the darkness.

“So, you arrested him? Or the police did?”

“No. We couldn’t, because he was a British diplomat. Philip Sidney. He fled to the British Embassy, and we couldn’t get in there. It’s legally British territory.”

Daniel could understand perfectly. In fact, he felt the same Emotion himself. It was an appalling thing to do, outrageous. He knew all the arguments for diplomatic immunity and for protecting the countless diplomats abroad, but it was certainly not meant to escape punishment for offenses like this. He was embarrassed for his country, humiliated that such a thing should be told to him by his own brother-in-law, and he had no defense for it whatsoever. “I’m sorry,” was all he could think to say.

“Of course,” Patrick said quietly. “I knew you would be. I want to do something about it, but I’m not sure how. Maybe if he could be charged with anything, and come to trial, all sorts of questions could be raised. Why did such a man have this post in Washington? Why, if he is innocent of the assault of Rebecca Thorwood, did he leave without any preparation, such as ending the rent of his apartment? He took only his clothes, eluding the police to leave the embassy at night and collect his things from his apartment. Then he went to New York, and straight on to the next ship leaving for Southampton. That looks like running away, doesn’t it? Why?” Patrick’s voice in the near darkness was tense with emotion. “Surely the accusation of assault and theft would have to arise if he were in court for any offense committed in England? We’ve just got to get him to trial.” He did not ask Daniel outright to help, but it was threaded through his words.

Daniel thought about it. He could understand Patrick’s sense of outrage. He would have felt it, too, if an American had committed such a disgusting act in London and then fled home, pleading diplomatic immunity. “Tried for what?” he asked slowly. “He’s been in America for the last few years, hasn’t he?”

“Yes, but the British Embassy anywhere is British territory,” Patrick said, “as is any country’s embassy. If he had done something there . . .” He stopped, looking at Daniel intensely.

“I suppose it would . . .” Daniel wanted to be cautious. This was far outside his experience, and yet he felt the same anger, pity, and outrage at the injustice that Patrick did. “Will you help?” Patrick asked. “If there is something you can do?”

Patrick turned toward the light from the drawing-room windows, and Daniel could see his face was lit with a wide, warm smile. He did not need to say anything.

From TRIPLE JEOPARDY. Used with the permission of the publisher, Ballantine Books. Copyright © 2019 by Anne Perry.

Ross Macdonald's ‘The Moving Target': A History in 25 Covers 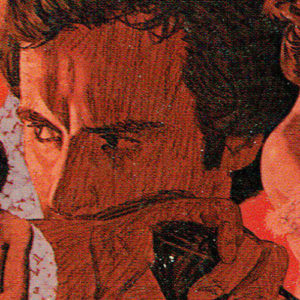 Ross Macdonald's ‘The Moving Target': A History in 25 Covers Although I’d previously sat through numerous TV mystery and detective dramas, and had occasionally come across crime short...
© LitHub
Back to top