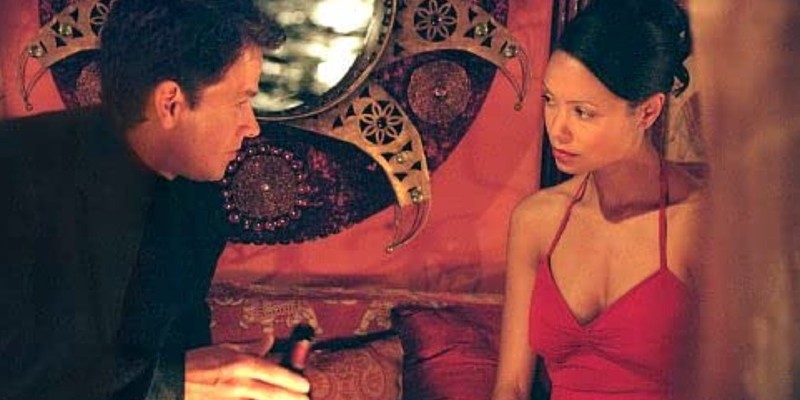 The Truth About Charlie has been around for two decades and I've been waiting all this time to tell you why I love it.

Let me just get this out of the way up front. The Truth About Charlie, the 2002 remake of Charade that you probably don’t remember, isn’t a great movie, per se. Mark Wahlberg is in the Cary Grant role, so that’s your first tip-off, but then again Wahlberg was just coming off Boogie Nights when he was offered the part (based on Paul Thomas Anderson’s strong recommendation), so let’s give everyone involved a bit more credit and accept that the casting wasn’t quite so lunatic as it now sounds. (Plus, let’s be honest, Wahlberg has stolen his fair share of movies over the years, hasn’t he?) A few of the movie’s faults include: mixed-up plotting, overwrought directing, a liberal use of handheld recording devices, and a general inability to hold onto one tone for more than a few minutes at a time, leading you, the audience member, to wonder often and occasionally aloud, what the hell am I watching? Why are we in close-up again? Who made this thing? The answer to that last question, by the way, is Jonathan Demme.

Around 2000, Demme was riding a massive wave of success from his string of hits over the previous decade, including The Silence of the Lambs (1991) and Philadelphia (1993). He was an Oscar winner. An industry stalwart with Hollywood clout. He liked to hold screenings at his house and one night he was showing his friends Charade, the 1963 Paris-set caper, and decided he wanted to remake it as a vehicle for Thandie Newton, whom he’d directed in Beloved (1998). That’s the other thing to know about this movie. It features Thandie Newton in the lead, the Audrey Hepburn role, and if ever an actor were equipped to take up that mantle, it was Newton, who had then just had her breakout role and was about to star in Mission Impossible 2. Replacing Audrey Hepburn is a tall order, but Newton more or less pulls it off, which is the main reason you should watch The Truth About Charlie, to witness and appreciate an actor whose charisma jumps off the screen. But instead of that perfectly valid reason, I’m going to focus on this one: it’s just such a strange movie.

Now, I want to hone in one aspect of that strangeness: Mark Wahlberg speaks French.

Let me take a step back here and return to an earlier point, when I conceded that The Truth About Charlie, the movie I’m asking you to watch, isn’t all that good. When it came out, the critics mostly hailed it as a travesty, an offense, and/or a sign of Hollywood’s persistent cynicism. How dare they remake Charade? But here’s what I want to suggest: Charade wasn’t all that good, either. Hold on, I’ll give you a couple hours to go back and watch it…

Do you see what I mean? Look, Charade is a classic, there’s no denying it. (It came in at #73 on the list of all-time greatest crime movies, right here on CrimeReads.) I’ve seen it maybe two dozen times and enjoyed it on every occasion. It’s stylish as hell, fun, funny, and includes some great performances, not just from the timeless leads, but also from Walter Matthau and James Coburn hamming it up in support. Charade also doesn’t really make much sense. The plot is a mess, the motivations inscrutable until they’re revealed in clumsy fashion, and in the second half the thing just drags on and on as the byzantine story is unwound. You also can’t help feeling it would been far tighter, and better, had Hitchcock directed it. In fact, let’s stop on that point for a minute, because it’s important. Charade was conceived, essentially, as a Hitchcock knockoff. The script, by Peter Stone, was picked up by Universal specifically because of its potential to fill that lucrative comedic thriller space Hitchcock had mastered for them, and they wanted to give it to another director so that they wouldn’t be so completely dependent on the Master of Suspense every time they wanted a dash of sophistication and style in their mysteries. So Stanley Donen, who hadn’t worked since Singin’ in the Rain, was added to the project, and pulled it off admirably. It’s a vibrant, memorable film with two iconic actors having themselves a ball and looking fantastic while they do it. But was it really such an untouchable gem?

Okay, now that I’ve denigrated a film I love, let me get back to celebrating one I enjoy mostly as a novelty. I was telling you how strange The Truth About Charlie is. So Demme is obviously aiming for a string of homages not so much to the original Charade, with its Hitchcockian pastiche, but to the French New Wave. He even cast Anna Karina, Godard’s 1960’s muse, who starred in A Woman is a Woman (1961) and Pierrot le Fou (1965), among others. And then there’s the music, which was actually pretty wild at the time, a cosmopolitan mix of European influences, with quite a lot from the rising EDM scene. Also, Demme was using all those handheld cameras. Sometimes they spin around, other times they’re really close up, or following someone through a crowd. Demme noted that it’s the film he probably would have made straight out of film school, if he’d gone to film school, and that feels about right. Oh, also, in the middle of the dubious courtship between Thandie Newton and Mark Wahlberg (I’m not getting into too much plot summary, because I’m assuming you just went and watched Charade, or remember pretty much how it goes—she’s a widower, her husband was a war criminal, Grant/Wahlberg is helping the dead husband’s co-conspirators get at some fortune supposedly left hidden to Hepburn/Newton, or is he?), there’s this really bizarre thing that happens. They’re in a hotel room, and Newton’s character is showering so that they can dance. (This isn’t the whacky shower scene with Cary Grant fully clothed, it’s even weirder.) So, they’re in her hotel room following a really scary scrape, and she’s jumping in the shower, a perfectly normal thing to do, when Wahlberg spots a cd on her shelf. “Do you know Aznavour?” he asks. I mean, she lives in France, she knows who Aznavour is. She also owns the cd and left it out, lying around next to a stereo. Anyway Wahlberg asks her. And then…Aznavour is there. In the hotel room. With them. Singing, like it’s a one-on-one date on The Bachelor. They got Aznavour! Demme had a lot of sway in those days, and everyone, presumably, was clamoring to work with Wahlberg, just to be around that magnetism, that panache, even Aznavour. Here’s the scene:

I’m going to now finally return to the original point I was making, about Wahlberg speaking French. When the film came out, Wahlberg in the Grant role was the foremost problem a lot of people had with the film. (Demme’s original choice for the role, in case you were wondering, was Will Smith, who would have been excellent for it, probably, but he was making Ali.) Cary Grant, for a lot of people, symbolized everything that was sophisticated and clever and beautiful about old Hollywood, and Wahlberg is the guy from Patriot’s Day. (Wait, where do you get off talking crap about Patriot’s…nope, I’m not getting dragged down that road.) But it’s exactly Wahlberg’s lack of affectation—call it sophistication, if you like—that makes this, his most consciously affected role, worth watching. This is Mark Wahlberg, just walking around Paris in a goddamn beret and turtleneck, fresh off an imaginary run-in with Aznavour, pitching woo at Thandie Newton of all people. And then he speaks French! First with a hotel clerk, and then with a police commandant who definitely knows he’s up to something and asks in very French fashion about what kind of man gets to go to bed with a woman like Reggie / Thandie Newton. And you know what? Wahlberg’s French, it’s not that bad. Now, maybe this means more to me than other people, because shortly after this movie came out I moved to Paris. I was living in the neighborhood where a lot of the movie was shot, and I too had a thick Boston accent and more than that, a Boston attitude, a certain swaggering pissed off way of walking through the world like I was about to buckle under the weight of my shoulder chip. But not in Paris. In Paris I could wear nice sweaters and when stopped by the police on the street answer with a cool, detached, “Oui, madame?” I could buy baguettes and ask people whether they knew Aznavour. So I feel a strong bond with Wahlberg here. He wasn’t even thirty years old when this thing was shot. A kid from Dorchester who dragged himself up through hell and high water to a point where he could plausibly be cast in the goddamn Cary Grant role of a Jonathan Demme movie shot in Paris. And if he could do that, why the hell shouldn’t he speak some French?

Okay, I’ve probably exhausted your attention here. You have a long night ahead of you, watching and then rewatching The Truth About Charlie. (To view it only once, you’d have to be heartless.) So let’s just close this on a final suggestion. Maybe we could all do with a little more whimsy in our lives, a dash of affected sophistication, a little Aznavour-in-your-hotel-room, some Wahlberg speaking French. I implore you, give it a shot. If not for me, for Thandie Newton. 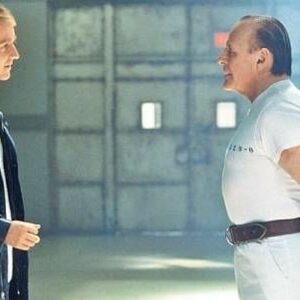 Like a lot of people (or a lot of writers, anyway) I’ve been fascinated by serial killers since I was a child. Whether...
© LitHub
Back to top