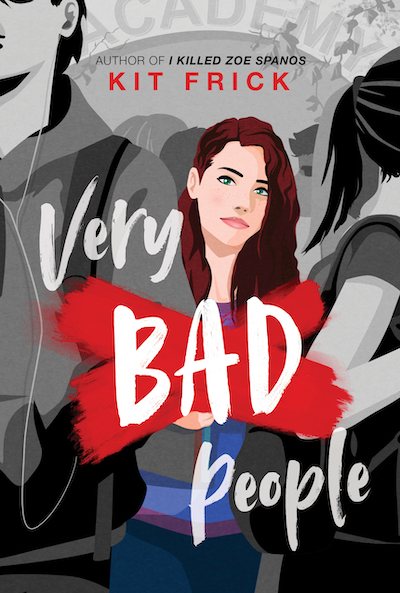 We're thrilled to reveal the cover ofVery Bad People, by Kit Frick. In this dark academia young adult thriller for fans of The Female of the Species and People Like Us, a teen girl’s search for answers about her mother’s mysterious death leads to a powerful secret society at her new boarding school—and a dangerous game of revenge that will leave her forever changed. Very Bad People will be released by Simon & Schuster in April 2022.

We are the Bolan sisters. Calliope, Lorelei, and Serafina.

If our names sound like they were plucked from a fairy tale, it’s because they were. Momma wanted, above all things, to live in a fairy tale.

We have pale, freckly skin and dark auburn hair, which we refuse to cut. It falls in long jumbles down our backs—thick and wavy for Lorelei and me; wispy curls for Serafina. We are tall for our ages, respectively. We are clumsy. We have mammoth feet and delicate wrists. We see the world with perfect vision. Lorelei and I have green eyes. Serafina’s eyes are brown. When we are together, we collect stares we’d rather return. See? It’s the Bolan girls. The ones who survived.

We don’t live in a fairy tale, but people regard us, sometimes, as if we are more story than girl. More myth than flesh that hurts and bleeds and grieves.

Serafina is seven, the baby. Lorelei and I are so close in age, so close in appearance, so close that we are often mistaken for twins. I am the oldest, sixteen. My sister is fifteen, a year and change behind me.

Our mother loved all magical stories and consulted a variety of sources when naming her daughters. My name, Calliope, was drawn from ancient Greek myth. Lorelei owes hers to German folklore. Serafina is from seraphim, angels of the highest order in Abrahamic religious lore. Put us together, and we are part survival story, part fable, part cautionary tale.

We live with our father in a small village in the Adirondack Mountains. Our house is large and drafty and far from other houses. There is a nearby lake, from which our village takes its name. There is a grocery store and a general store and a movie theater with one screen. In the summer, the vacationers and second-homers move in, and the village hums with life. In the winter, we hunker down, shrinking to a quarter of our size. About eight hundred families live in Plover Lake year round; at school, we average 11.7 students per grade. In harshest winter, you could pack us all into a snow globe and shake.

The Bolans have always lived here, before the accident and after.

When I was little, I loved our house, our school, our postcard town. In my fantasies, I would always live here with my mother, my father, my sisters, and our dog. I could not fathom growing up and moving away. What could possibly tear me from the place that held all my memories, my family, my firsts?

Now, the village is crushing me. It is so small. It has eyes and claws and teeth.

Tomorrow, I am leaving. I might never come back. 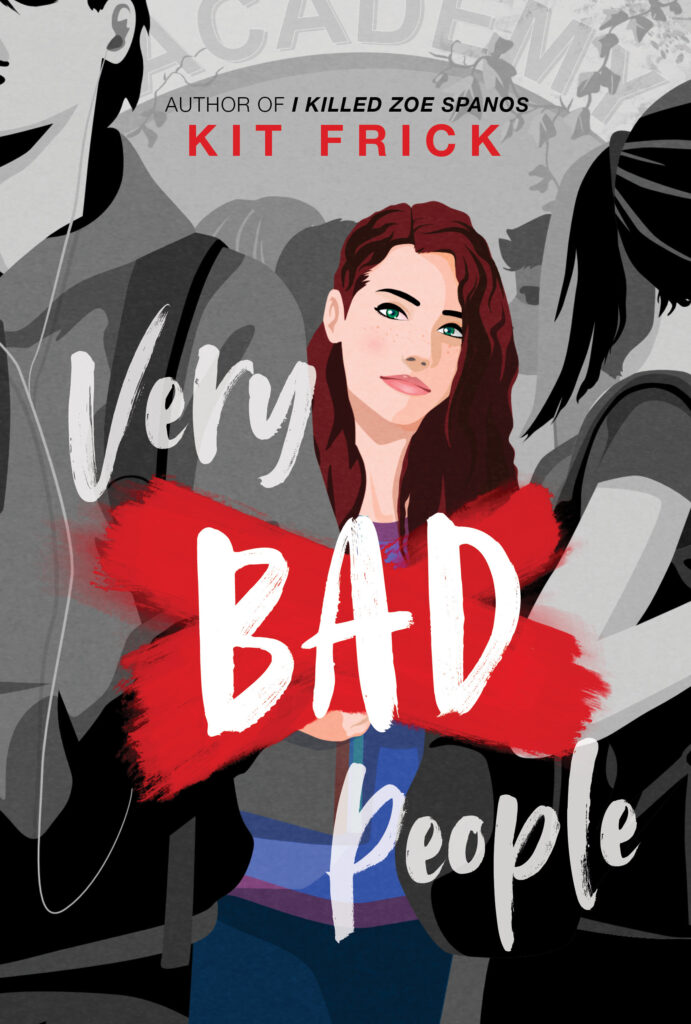 If Momma had gotten the air-conditioning in the minivan fixed, we wouldn’t have been driving with all the windows down that day six years ago. A curse when the water rushed in fast, so fast. Then a blessing, an escape. But our mother hated to spend money on practical matters, as if the air-conditioning might fix itself, or the leaky bathroom faucet, or the clogged gutters. Or as if those things didn’t matter.

It wasn’t because we didn’t have the money. Dad had a steady job and Momma was always “saving her pennies for a rainy day,” which was a bit of an exaggeration because those pennies came from a generous trust set up by the wealthy grandparents we rarely saw, and rainy days could be any day, filled with fun things like ice cream and adventures with her girls.

Dad was the voice of reason. Dad did the shopping, the upkeep, made sure we were clothed and fed and had the right number of subject notebooks and a full pack of pencils on the first day of school. Momma made sure we had treats stashed in our bags and scavenger hunts on our birthdays.

If Dad had known about the broken air-conditioning, he would have seen that it got taken care of, but only Momma ever drove the minivan. And so that Friday in September, as we sped away from the elementary school—Lorelei and I in the middle row, Serafina, the baby, in her car seat in the back—and toward one of our mother’s secret adventures, destination unknown, we had the windows open, and a warm breeze was rushing through.

Momma was in a good mood that day—the best mood. Her gold chandelier earrings danced back and forth across the tops of her shoulder blades as she drove and belted out Fleetwood Mac and Tori Amos and Florence + the Machine and all the music she only put on when she was feeling a little nostalgic and a lot giddy about some surprise she had in store. Her voice was throaty and lilting. She smelled like the lilac perfume she wore for special occasions. She threw us kisses in the rearview.

At some point, we stopped for gas and car snacks. When we got back on the road, the afternoon sun was warm on our faces. My sisters and I dozed off.

When the van swerved off the highway, smashed through the guardrail, and sailed into the narrow strip of water along the side of I-87, my sisters and I were still sleeping. Dad was at work. Sebastian, our blue-eyed Aussie puppy, was at home. Momma was driving.

Lorelei always says I sleep like the dead. When we hit the water, I didn’t wake up right away. I was dreaming about Six Flags. We were on the Comet, and everyone was screaming. The roller coaster trembled just slightly on its rails; the wooden beams were white slashes below us, beside us. The clouds were so close I could touch them with my fingertips. I left trails in the sky. The leaves were orange and yellow flames streaking through blue. As we whipped through the park, the spray from the water rides splashed against our faces. We screamed and screamed.

I woke to cold water—rushing in, filling the van, dragging us under. Screams and screams. Only our mother was silent in the front, slumped over the steering wheel. Momma! Dark streaks, dancing in front of my eyes. Lorelei’s bare foot, tangled in something. The seat belt. I clawed at mine, got it off, and the water kept rushing in, greedy, greedy. I got Serafina out of her car seat. I’d helped our mother fasten and unfasten her plenty of times; plenty of times she was wailing, screeching, inconsolable, but this was harder, scarier than anything I’d ever done. Get Momma, I screamed to Lorelei, but my sister was frozen, staring.

Then we couldn’t scream anymore because the water was everywhere, snatching our voices, sucking up all the air. I clutched Serafina to my chest and groped for Lorelei’s hand, pulled hard. I half climbed, half swam, dragging Lorelei at first, until something finally clicked, and she started moving behind me, toward the front of the van, the open passenger’s side window.

The dashboard, lit up like Christmas. Lorelei’s pink jelly shoe, rising on the water, rushing past me into the back. Momma, still slumped over the steering wheel, hair floating in a dark cloud around her, the gold sparkle of her earrings tangled in the strands. No air. Water, everywhere. Momma! I needed to stop, to get her out, but my lungs burned and my baby sister squirmed against me. There was no time.

I pulled myself out through the passenger’s side window, into the lake, and Lorelei followed. The stretch of water was deep but narrow. We swam to shore.

My sisters and I survived, but our mother never woke up. Kathleen Marie Bolan, forever thirty-eight, forever preserved in sticky amber—Momma. Never aging for us, never graduating to Mom or Ma. Something terrible happened while your three princesses were sleeping. Maybe something scared you, caused the wheel to jerk. A witch, a wolf, an evil queen.

People say a lot of things. That you were irresponsible, distracted. That you wanted to die. That you tried to take us with you. I stuff cotton in my ears, push those voices out. Some fairy tales are dark, hideous, pulsing with blood and sorrow. But I know you. That wasn’t your kind of fairy story. You wanted the dazzling ending, fireworks in the sky, the happily ever after.

Dad says that sometimes, bad things happen to good people. Six years later, the cause of the accident is officially “inconclusive.” Dad says that it was a terrible tragedy, and maybe that’s all we’ll ever get to know. This is enough for him, or at least he says it is. But I don’t think it will ever be enough for me.

From Very Bad People by Kit Frick. Used with the permission of the publisher, Margaret K. McElderry. Copyright © 2020 by Kit Frick. 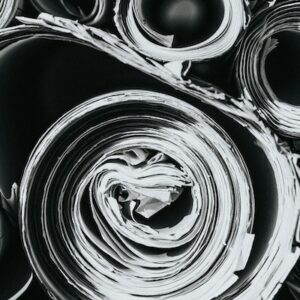 Nine Books With Plots Pulled From Real Life Whenever I receive the tried-and-true question—“Where do you get your ideas?”—I answer honestly: “A lot of the time...
© LitHub
Back to top