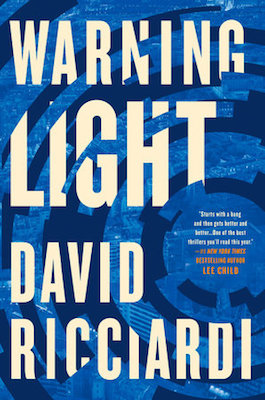 In the following exclusive excerpt from Warning Light, by David Ricciardi, a plane goes rogue in Iranian air space and air traffic controllers must react quickly and professionally. The plane's difficulties are just the first source of tension in this white-knuckle debut.

Area Control Center, Sector Two, was a cold, modern room dominated by computer monitors and communications equipment. The radio frequency handling Flight 337 was being broadcast over the loudspeakers and all eyes were on the air traffic controller working the flight. The veteran controller had worked planes with communications trouble, aircraft that had strayed off course, and even emergencies, but no one had ever disobeyed an instruction before. He looked over his shoulder for guidance from the sector chief.

“Why won’t he divert to Beheshti?” shouted the chief.

The controller turned back to his monitor. Radar showed the British Airways flight continuing on course.

“They seem to be losing altitude and their course is oscillating.”

“If they are going to avoid the restricted airspace they must divert now. Raise them again,” the chief ordered.

For reasons of national security, safety, or even recreation, most countries have restricted airspace. Some parts of the sky are simply off-limits to aircraft that don’t have permission to be there, and the airspace in front of the struggling Airbus was most definitely off-limits.

The chief became angrier as the seconds passed in silence. “I am willing to believe we have an aircraft in distress if they communicate and divert, but they cannot simply ignore us. We have to assume a possible Trojan horse. Alert Western Area Command. Tell them we have an unresponsive aircraft and an imminent violation of the airspace around Sirjan.”

The veteran controller had worked planes with communications trouble, aircraft that had strayed off course, and even emergencies, but no one had ever disobeyed an instruction before.

The turbulent politics of the Middle East had led Iran to put military officers or reservists in control of its civilian air traffic control centers, and the Trojan horse scenario was one that all of their air defense specialists had studied. With air traffic control radar unable to distinguish an A380 on a routine passenger flight from a B-52 bomber intent on attacking Iran’s nuclear facilities, controllers could only establish an aircraft’s bona fides by assessing the pilot’s communication, behavior, and pre-filed flight plan, all of which could be faked. This plane was already in central Iran and headed toward prohibited airspace, which was even more sensitive than restricted airspace. But the Iranians were ready.

With wars to its west and north, and unfriendly aircraft regularly patrolling the Persian Gulf to its south, Iran had fighter jets and surface-to-air missiles stationed throughout much of the country.

A technician in the air traffic control center picked up the third of several red phones on a console and spoke rapidly to the air force officer on the other end.

“Western Command, we have a foreign aircraft headed toward the Sirjan prohibited area, possible Trojan horse. Aircraft is one hundred and twenty nautical miles southeast of Esfahan, heading one-three-zero, twenty-five thousand feet . . . Aircraft has ignored instructions and is not answering its radio . . .” The technician listened for a minute. “I understand. One moment.”

He held the phone at his side and pointed at the map on the computer screen in front of him as he spoke to the chief of center.

“In a few minutes they will exit the SAM net around Esfahan. If they continue on this course they won’t be within range of the S-200 battery at Bandar Abbas or the HAWK battery in Sirjan for another twenty-five minutes. They’re flying through a hole in our defensive net. They’ll be in Southern Sector before Western can scramble fighters or launch a missile.”

The chief scowled. “Raise Southern Area Command right now. Do we have any interceptors in Kerman?”

The technician spoke into another of the red phones and relayed his conversation to the chief. .

“Kerman is still not operational because of the earthquake. Southern can scramble two F-14s from Shiraz in ten minutes, but their radar is down. They’re asking us what to do.”

The chief studied the digital map on the screen of the controller in front of him. With his finger on the screen, he traced the probable course of the violator.

“Tell them to launch the fighters and alert the SAM battery in Sirjan. We’ll coordinate from here.”

The technician relayed the orders and hung up the handset. He was a patriotic man, but he knew that the aircraft in question was almost certainly a civilian airliner with engine troubles. Shooting it down would kill the hundreds of passengers aboard. He stared at the computer monitor in front of him, willing the giant Airbus to turn around.

He knew that the aircraft in question was almost certainly a civilian airliner with engine troubles. He stared at the computer monitor in front of him, willing the giant Airbus to turn around.

The very real threat of an attack on Iran’s nuclear facilities ensured that its interceptors were kept on a high state of alert. The fighters based in Shiraz were American-made F-14As that had been sold to Iran before the 1979 revolution. Despite its age, the F-14 was still a formidable air superiority fighter, and it would make quick work of a commercial airliner. Each of the two fighters carried a pilot and a weapons officer. In the thirty-second briefing they were given before they jogged to the flight line, the four aviators were told only that a foreign aircraft had disobeyed instructions, ceased communications with air traffic control, and was flying into prohibited airspace. No mention was made that there might be passengers aboard or equipment troubles. The fighters were to intercept the aircraft and await further orders. Typically they would force the jet to land at an airfield away from the forbidden airspace, but the fighters carried live weapons and the pilots were well trained. They would follow the orders they were given.

At the Seventh Tactical Airbase outside Shiraz, the lead fighter throttled up and lit its afterburners, sending cones of flame erupting from the engines as it rocketed into the afternoon sky. When the second fighter was airborne and formed up with his lead, the pair banked hard left and turned to their intercept course. The planes’ variable aspect wings swept back to their high-speed positions and the fighters accelerated rapidly to just under Mach 1.5. They would cover the one hundred and twenty-five miles to the Airbus in less than ten minutes. The big jet would be in missile range in less than five.

While the chief and the technician coordinated the intercept of the troubled airliner, the original controller tried repeatedly to raise the British Airways flight. In addition to the established VHF radio frequency, he broadcasted over the 121.5 MHz emergency-use frequency, which all aircraft monitored. The Airbus was non-responsive.

The controller addressed the chief again.

“Sir, the target aircraft is ninety miles from Sirjan but has slowed and lost altitude. Airspeed is down to two hundred and twenty knots and altitude is erratic around flight level two-forty. Their troubles may be worsening.”

“Then why are they not descending and diverting to Esfahan as ordered? They are strictly forbidden to enter this area.”

The technician was on the phone again. “Sir, the fighters are fifty miles out and have the target on radar. Southern Command is not going to let that aircraft reach Sirjan.”

The chief hesitated. Every muscle in his face was strained.

The technician wrote something on a strip of paper and handed it to his boss.

The chief scowled, then softened his expression. The two men had been just boys in 1988 when an American warship, the USS Vincennes, had shot down Iran Air Flight 655 over the Strait of Hormuz, killing all two hundred and ninety people aboard. The men had experienced firsthand the suffering and rage that had consumed the nation in the wake of the disaster. The chief nodded slowly. He could not let it happen again.

“Give me the phone,” he said. “Who is this?” he spoke calmly into the receiver.

Like all chiefs of center, he was also a senior reserve officer in the Islamic Republic of Iran Air Force. He listened to the response and replied, “This is Major Shabazz Farini of the IRIAF. Our target is most likely a British Airways A380 with mechanical issues. We had been speaking to it on civilian frequencies and tracking it normally until it developed engine trouble. Keep your weapons tight and confirm when you have visual identification of the aircraft. Understood?”

As he listened to the response, he stared at the map display as it showed the aircraft continuing on its southeast course. His breathing quickened and his face reddened.

“I understand it is a security threat, that is why I called you, but I also know that a bomber would not approach its target at two hundred and twenty knots. Do you think he’s giving you time to catch up? Call me when you have visual confirmation of aircraft type!” The chief slammed the phone into its cradle.

The Iranian fighter jets slowed to five hundred knots as they approached the Airbus from its four o’clock position. The F-14s flew five hundred feet above the larger plane, giving the pilots a positive visual ID of the distinctive two-story aircraft. The fighters climbed to bleed off speed and turned hard left before rolling out on a new course behind and slightly above the passenger plane. The lead fighter moved to the left and accelerated until he was abreast of the larger plane’s cockpit before descending to the Airbus’s altitude. The afternoon sun made it hard for the fighter pilot to see into the passenger jet’s cockpit, but he had flown to this side purposely, so the Airbus pilots could clearly see him. He accelerated again until he was a few hundred feet in front of the Airbus and rocked his wings. If the Airbus rocked its wings, it would be confirmation that the big jet was having communication problems and would follow the fighter.

But the Airbus did not rock its wings. It continued on course, slowly losing altitude. The lead F-14 pilot spoke to his commander and pulled another five hundred feet in front of the Airbus. He released three bright flares into the air. The flares were originally designed to act as decoys for heat-seeking missiles, but when used like this they were a universally understood warning to comply with instructions or face the use of force. The lead fighter banked gently to the left, indicating that the Airbus should follow, but the number-two fighter radioed his flight leader that the passenger jet was continuing on course. The leader relayed the sequence of events to his ground commander as he circled around behind the Airbus. He slotted in next to his wingman and took up firing position. 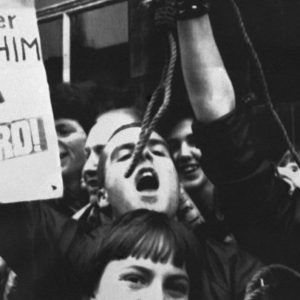 The Grim, Potent World
of David Peace When I first encountered 1974, the opening novel in David Peace’s Red Riding Quartet, I was in a bad place. My father had just...
© LitHub
Back to top