The novelist behind "Wag the Dog" reflects on the book and the film adaptation's prescient lessons for using conflict to generate popularity.

The networks had special theme music and big title graphics for their war coverage. All of them looked like the hive mind of a half-time marching band had taken over the news departments.

Watching it, on my home screen, I said, “This is a made-for-TV-movie.”

What if it what it actually was what it appeared to be? That became the novel, American Hero, later retitled Wag the Dog. It is populated by real people. The things they do in the book are mostly things they really did, or very like their documented realities, except when they interact with the fictional people who also populate the book. For example, it is George H.W. Bush’s actual political consultant, Lee Atwater, described in his day as “the most evil man in America”, who realizes contemporary wars require public support, the public gets to know their wars on TV, therefore a war should be created by someone who’s a real professional, a director, not a general, and selects John Lincoln Beagle, a completely fictional amalgamation of several famous directors with a completely made-up life to design a war that Americans will love on TV.

The movie, Wag the Dog, was next. It came out in 1997, Robert De Niro and Dustin Hoffman, plus Woody Harrelson, Dennis Leary, Anne Heche, and Willie Nelson. The president had changed. It was Bill Clinton. He didn’t have a war. He did have issues with sexual misconduct. The story was altered to be about the creation of the illusion of a war. But for the same purpose. To rally domestic support for a president seeking re-election.

The finances of the film are very interesting. That’s another story. Which I used as a significant plot issue in my most recent book, The Deal Goes Down. There’s no room for it here, but you can read it there.

Next, there was a remake. Not of the movie. Of the war. Gulf War Two.

In 2001, Osama bin Laden had planes flown into the World Trade Center and the Pentagon. In 2003, the US went to war against Iraq. No connection between these two events is indicated here. Feel free to make up your own. That’s what everyone else did.

Now, we have a third war. The Russian invasion of Ukraine. It is, in many ways, a sequel to GW I and GW II and to the stories used to sell those wars.

The book, the movie, and the three wars are all united.

They all play with variations on the same basic story. They all touch on the same themes. They’ve all been very successful as entertainments. Yet, in very significant ways, they’ve all had huge failures.

It was never officially announced, but a primary goal of Gulf War One, if not the #1 goal, was to get George H.W. Bush re-elected.

A cynical thing to say?

A documented fact, which is in the novel, is that before Saddam Hussein invaded Kuwait, he asked the American ambassador, April Glaspie, if it would be OK. She told him America had “no opinion of Arab-Arab conflicts.” Indeed, after he did invade, George H.W. Bush was prepared to let it slide.

Then he met with Maggie Thatcher.

She’d had the lowest approval rating of any British Prime Minister in history (up to then). Then the Falklands War transformed her from hated to heroine quicker than a spell from Harry Potter. Her accounts of the meeting with Bush are quite high-minded. But Vice President Dan Quayle reported it, on camera, more colorfully, “I met Maggie Thatcher the other day. And she told me the secret of political success. Now, if I can only find a Falklands to have a war on.”

Thatcher stayed in power for 8 more years. Somehow, H.W.’s war failed to get him re-elected.

If Gulf War One had actually been written and directed – in secret – by a famous film director – it would have required an extensive conspiracy. Therefore, the other thing the book had to do was create a credible conspiracy theory. Conspiracy theories are constructed out of anomalies. Items that don’t fit the official narrative. Often they’re real. Sometimes they’re false. I only used genuine documented material for my (false) conspiracy.

The George H.W. Bush administration had worked with facts. Sure, they ignored material they didn’t like and hyped the items that glittered, but they remained fact based and even believed they would be discredited if caught in outright lies.

The new administration – Son of Bush – had a group-wide mystical vision. They didn’t need facts – they could go with pure story. They made claims that were not merely false – Saddam Hussein was part of 9/11, that he had WMD’s, even, probably, nukes, that the war would pay for itself, and there was no need to plan for the aftermath – that were easier to see through than the Emperor’s New Clothes.

In the 9 years since the book, in the 5 years since the movie, gullibility had been on the rise. Gullibility had increased geometrically. In particular among journalists and politicians. The general public followed along. If anyone wants to claim that Wag the Dog, movie and book, had an effect, they have to say it was ass backward. Instead of warnings they served as manuals, how to’s – Methodologies for Fooling the Public.

Let’s step back to Gulf War One for a moment.

If we judge it on realities, it was a great success. It was a legal war. Yes, there are such things as legal and illegal wars. It sounds academic, but it’s important if we want to keep living in an orderly world. It was authorized by the UN Security Council for the purpose of driving Iraqi forces out of Kuwait and restoring Kuwaiti sovereignty. That set an inherent limit. That limit is what made it possible for Western and Eastern nations which were often at odds to join forces. When Iraqi forces were defeated and sent racing home, Bush the Elder, as leader of the Allies, accepted that limit and stopped.

But the war had been sold as a story.

In the novel it had the working title WWII-2-V. World War II – 2 – the Video. WWII had the #1 Top all-time villain. Hitler. In the novel, Saddam had been recruited to fill the role. In what we call reality, George H.W. Bush, Maggie Thatcher and other great leaders called him “the new Hitler,” and “like Hitler.” That created the expectation that the finale of WWII-2-V would be similar to that of World War II. Hitler would die. At least be removed. When the Allies rolled into Baghdad it would be like the liberation of Paris. The bad guys of the old regime would be stripped from power. The population would embrace democracy, capitalism, and love of the USA.

Critics deemed George H.W. Bush’s war a failure because it did not deliver that ending. The complainers said he should not have stopped. He had left the job undone.

That critique marched the world into GW II.

GW II was designed – or – if you like – impulsively executed – to complete the job. Bush the Younger, his cronies and his crew, were not were not constrained by realities or legalities  because they didn’t believe in either one. They believed only in The Story. They decided they could weasel the opportunity out of 9/11 to go in and finish it.

One result was a great success. Unlike Bush the Elder, Bush the Lesser got re-elected.

All the rest was utter failure.

They started two wars they couldn’t finish. At least three countries dissolved into sectarian wars and civil wars. Over 700,000 direct war deaths and about 22 million displaced people in Iraq, Syria, and Afghanistan. The estimate for the cost of care for just America’s wounded veterans is over $2 trillion. They achieved the deep world wide divide between the Muslim world and the West that had been Osama bin Laden’s goal and that he could never have gotten even close to without Bush the Lesser’s actions.

There is one more legacy. It’s gone unsaid. It’s unspeakable. The illegal war – the invasion of Iraq in violation of the territorial integrity of nation states – so as to replace a disliked head of state with a more amenable one, using the flimsiest of evidence – is the model for the third war, Putin’s invasion of the Ukraine.

Silvio Berlusconi stated that Putin told him personally that “the troops were supposed to enter Ukraine, reach Kyiv in a week, depose the incumbent government, … install a government already chosen by the Ukrainian minority … and then leave the following week.” That sounds an awful lot like what Bush the Younger thought would happen with his invasion of Iraq.

Putin sold the war to his domestic audience with the Cyrillic version of WW II-2-V. He claimed to be fighting Nazis! Unlike Bush’s WMD’s at least a few could be found. In defense of Mother Russia. But no credible case could be made that a few Far Right Ukrainians were a real threat.

Putin’s story got almost total support from Russian media. The view from the West is that it’s obtained by force. But there’s no explanation of how the West’s own media supported a set of war stories that were equally false.

Did Wag the Dog, book or the movie or both, have any real world effect?

I would love to think so. But I can’t figure any way to actually track it from seed to sowing. All we can do is take a general view of our politics, the media, and warfare around the world. Accountability has declined. Stupidity, distortion, lying, have all been steadily on the rise. I don’t think it’s my fault—but just in case, you all have my apologies. 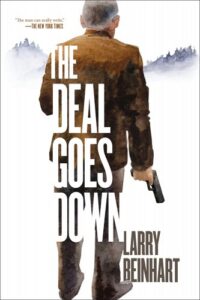 Good Company: Mickey Haller and the Enduring Appeal of 'The Lincoln Lawyer' 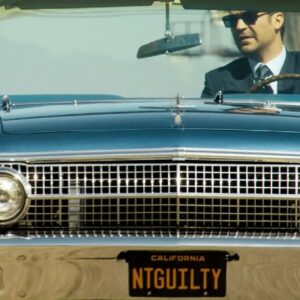 Good Company: Mickey Haller and the Enduring Appeal of 'The Lincoln Lawyer'

I first learned about crime fiction from my father Dan Riordan and his brother Paul.  They were old school gents and always...
© LitHub
Back to top