What Writing About the St. Bartholomew's Day Massacre Taught Me About the Madness of Crowds

A historical fiction author considers a sixteenth century atrocity with too many lessons for the present, and the role of fiction in representing the past.

I was reading a great interview on CrimeReads.com the other day—Paraic O’Donnell talking to Lee Child, genius author of the Jack Reacher novels—and they has this wonderful debate about the unreality of fiction. When I say it out loud, it sounds obvious, but it came up twice. And Lee said: ‘The only two real people in the transaction are the author and the reader.’

It’s absolutely true. Even if I put the Queen of England in the heart of my action—like in the ‘The Crown’ on TV—it isn’t actually her. It’s a fictional appearance by a ghost of a real person. If I put the 16th century Catherine de’ Medici on the page, a woman who history pretty much assures us was an embodiment of some kind of evil—and I do in The City of Tears—it’s still just a ghost of her presence.

I’m a writer of historical fiction. I’m a storyteller, but the facts of history are the framework for my novels, the backdrop. When my modern-day heroine Alice finds the cave in my 2005 novel Labyrinth, she’s opening a window on a genuine documented past, a place where people lived and loved and fought and died. Where leaders sacrificed themselves for their people. Where leaders sacrificed their people for personal gain. When my new ‘hero’ Minou, in The City of Tears, is in Paris or Amsterdam, she is an imaginary witness to real history.

In late 2019, Lee Child, JoJo Moyes and I were on tour with Ken Follett, who’d set up the Friendship tour, hopping between a sequence of wonderfulEuropean cities. We spent a lot of time talking about what we should next have for dinner after our events. (Pre-Covid – those were different times.)We also spent a lot of time talking about the craft of writing and what all those early mornings and late evenings add up to. Word upon word, building the imaginary world. First a tiny heap, then, at last, a hill or even a mountain for the reader to climb.

If I had to pull one thing out of those writers’ conversations in Rome and Paris and Berlin and Madrid, it would be this: gratitude. Gratitude that readers buy into the worlds we create and, while they remain immersed in the fiction, they read as if it were true. That’s the bargain Lee and Paraic were talking about, between ‘the only two real people in the transaction’.

In the early hours of August 24th 1572, in Paris, a wave of mob violence was unleashed. It changed the course of history and condemned France to another twenty years of religious civil war. Even today, it is hard to understand every detail of how it occurred. Some of the key events have been debated by historians for hundreds of years. This muddiness, these doubts, I am grateful for them. They create cracks in the edifice of recorded fact into which I can slide my carefully curated imaginary people—Minou from Carcassonne, her Franco-Dutch husband Piet, their lively, inquisitive children, their enemy Vidal. And if a daughter chooses just that moment to go out into the streets alone then, as a novelist, I have to bring myself to imagine what might happen next …

The St Bartholomew’s day Massacre of August 1572 is a key moment in The City of Tears, the second volume in my The Burning Chambers that began in Carcassonne in the southwest of France in 1562 and will end three centuries later, in Book IV, in Franschhoek in South Africa, the home of the exiled protestant Huguenot community in the South African winelands fleeing persecution in Europe. In 1862, it’s a rugged frontier country with echoes of great movement west of European pioneers in north America. Over three hundred years, my characters are swept along by the tides of history. They rise and fall. Money comes and money goes. Death and love co-exist, compete for pre-eminence. Destiny becomes manifest in their children and their children’s children.

And because of the times and the places they inhabit, the violence of the mob plays a terrible, inchoate, unpredictable role.

The scale of the massacre in Paris at the heart of The City of Tears wasn’t planned in terms of the thousands left dead, and then the perhaps 70,000 more slaughtered in copy-cat massacres the length and breadth of Paris in the following weeks. That there was a plot to kill the so-called ‘war Huguenots’, the Huguenot leadership, is not in doubt. There were multiple intrigues, of course, at court and in the military—the Valois dynasty, the Guise dynasty, the Huguenot king of Navarre, the Pope in Rome, Catherine de’ Medici herself, there were many players. Should that woman or that man die, others would look to seize the empty space and fill it with their own desires. Those intrigues targeted specific, powerful individuals. But the massacre spun out of anyone’s control and became indiscriminate—strangers killing strangers for no good reason, for an idea of allegiance to something almost impossible to define, two different ways of interpreting scripture, two different ways of living one’s faith or, simply, the desire for power.

How can that happen? It’s almost inconceivable—and yet we know that history repeats itself, will repeat itself again. For the scantest reasons, one group will demonize another and violence will ensue. On St Bartholomew’s Day in 1572, most of the people who died were ordinary people, caught up in the moment or trapped in an ambush not of their own making, people who might have preferred to go to work, to do their chores, to cook a nice stew for dinner by the light of a candle or lamp and go to bed while the city slept peacefully around them. But somehow a spark became a conflagration and, after a night and a day of violence, left Paris destroyed and burning.

I remember sheltering from a torrential downpour in Carcassonne one August many years ago. Since 1989, we’ve had a tiny house in the shadow of the medieval city walls and all of my historical fiction are love letters to Languedoc, that beautiful corner of southern France. As the rain cascaded down the millennial steps of the citadel, running in a spontaneous river past the front door of our tiny stone-built house, my son asked me how the rain decided to fall.

I had a go at explaining the science—at least, the science insofar as I, a layperson, understood it. Up in the clouds, a speck of dust forms a nucleus around which the water vapor of the cloud condenses. Then, given the right atmospheric conditions, more and more vapor will condense until the droplet is heavy enough to fall.

The speck of dust in The City of Tears was the marriage of the Catholic French king’s sister Marguerite de Valois to the protestant Henry of Navarre on 18th August at Notre Dame cathedral. That should have been an alliance for peace but someone—the Duke of Guise, Catherine de’ Medici, the king himself?—instead ordered an assassination attempt on the life of the protestant political and military leader, Admiral Gaspard de Coligny. Two days later, the reign of terror began.

First published in 1841, Extraordinary Popular Delusions and the Madness of Crowds is a fascinating journalistic study of one man’s understanding of just this process—what, in The City of Tears, my characters call ‘blood lust’—of how an idea takes hold of a crowd and drives it on into irrational actions, violent, immoral, horrifying. It’s author, the Scots journalist Charles Mackay, sets out to debunk irrationality. With hindsight, he asks how was it possible that crowds of ordinary humans got themselves caught up in alchemy, witch hunts, the Crusades. In the early 17th-century, ‘tulip mania’ that led to flower bulbs becoming a kind of currency and among the world’s most valuable commodities, less than a generation after the death of the great rationalist WilliamShakespeare.

We humans are programmed to buy into fiction. Somehow, stories we know to be created rather than reported are a comfort and a guide. Lee Child’s transaction between reader and writer is an innocent partnership. The imaginary world is built in the reader’s imagination on the scaffolding of the writer’s words—necessarily sparse, just a framework for the much more complete movie playing on a screen in the reader’s mind.

I’m tempted to say that the power of fiction can be turned against us. We are so keen to make sense of our fragmented, arbitrary existences that we cling to unhappy narratives of persecution or inequity, scapegoating this group or that, blaming this powerful person or that, when our only real future is in connection and community.

There was no need for so many people to die in Paris in late August 1572. The opportunity for peace was glimpsed, dismissed and erased. How my fictional characters respond to that awful tide of violence is just a story, but one full of hope and respect for those who strive, against the odds, to build a better world—even if, for the time being, that world is only make believe.

To give the final word to the French Goncourt brothers, writing in the mid 19th century: ‘History is a novel that has been lived; a novel is history that could have been.’ 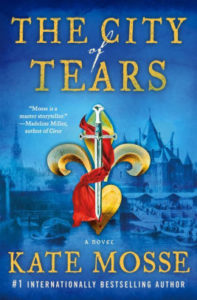 KATE MOSSE is a multiple New York Times and #1 internationally bestselling author with sales of more than seven million copies in thirty-eight languages. Her previous novels include Labyrinth, Sepulchre, The Winter Ghosts, Citadel, and The Taxidermist's Daughter. Kate is the Founder Director of the Women's Prize for Fiction, a Visiting Professor at the University of Chichester and in June 2013, was awarded an OBE for services to literature. She divides her time between the UK and France.