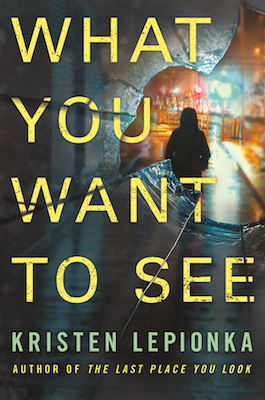 The following is an exclusive excerpt from What You Want to See, the highly anticipated new mystery from Kristen Lepionka and the second in her series featuring Roxane Weary, a wisecracking cynic with the classic PI’s heart of gold. Lepionka has been lauded for crafting her bisexual protagonist as a complex and appealing character who is neither shy about her sexuality nor defined by it.

The neighbor’s car had been broken into during the night. At a quarter after eight, she started screaming bloody murder about it, so much raw emotion in her voice that I grabbed my gun from my desk drawer and dashed outside, only to see her sobbing in front of the busted front window of her Honda. Bluebird—or whatever her name was—looked at me and wailed, “Oh thank God. You have to help me! What do I do?”

I shoved my gun into my jeans at the small of my back. “About your window? Call Safelite or something—do you want their number?”

“Oh,” I said. That seemed to fall under problems of her own design. “Um, you have to be careful about what you leave in your car around here—”

“Like this is my fault?” She stomped her feet. “God! Everyone here is so mean!”

I shrugged and went back into the building. Alejandro, who lived in the apartment next to me, was just opening his door. He looked sleepy and fabulous in a white satin robe. “From the way she  was screaming, I thought somebody died out there. Between this and those ugly things in the garden now? Worst neighbor.”

Alejandro giggled. He was Bluebird’s age or maybe younger, but infinitely less terrible. We’d bonded immediately as the only non-straight people in the building when he moved in last year. He said, “I gotta go back to sleep though, it’s way too early for this bullshit. But we need to have drinks soon, girl, mmkay?”

I told him to text me and went back inside. I had been sitting at my desk, hoping to get a response from the angry clock person. But now I wondered if going back to sleep was a better idea anyway. I went into my bedroom but then heard my phone start ringing from beside my computer.

“Everyone here is so mean,” I muttered.

“Did I wake you up?” Tom said when I answered. “Sorry.” “Surprisingly, no. But I didn’t sleep well. And I don’t think you’re sorry.”

“Well,” he said, a smile in his voice, “how about you buy me breakfast then?”

I sat on the edge of my desk. “Okay. Do you have news?” “News? Not really. Just some questions. Can I bring a date?” My jaw tightened. “What?”

“Sanko,” Tom said quickly. “He wants to talk, ask you some more questions.”

I covered my eyes with a hand. “Okay. But why am I buying you breakfast?”

“You’re not. I was kidding. Fifteen minutes, at Jack and Benny’s?” The restaurant was over near High and Broad, only a few minutes away from my place in Olde Towne. But although I was nowhere ready to be seen in public yet, a perverse desire to appear low-maintenance made me agree to the time.

The plastic-and-Formica booths at Jack & Benny’s Downtown Diner were small, and Tom and Sanko looked a little silly there, two not-small men seated across from each other, not speaking. “Hello,” I said, squeezing in next to Tom.

He looked happy enough to see me, but Sanko didn’t. “So how come you didn’t mention the other day that you’re working for Ungless again? On my case?” he said.

“Come on,” Tom said at the same time.

Sanko frowned. He was wearing the same blue suit as Tuesday, but this time with a bright red and yellow tie that someone had obviously told him looked peppy. Tom was in a dark grey suit with a tie that Pam had probably picked out.

I cleared my throat and said, “I wasn’t working for Arthur the other day when we talked. I didn’t even know what had happened to Marin until you told me. But I did talk to Arthur afterwards. I’m not trying to step out of my lane or anything here. I only want to make sure he stays out of jail, because he doesn’t belong there.”

“You don’t get to decide that.”

“Believe me, I know,” I said, “but it’s not like you told me everything either. The seventy-five grand? Obviously there’s more to Marin than just a fight with her fiancé, right?”

I shut my mouth and looked down at the golden beauty of my waffle, by far the best thing about this day.

“Is she always like this?” Sanko said to Tom.

I opened my mouth to respond, but then the waitress appeared with our food. I shut my mouth and looked down at the golden beauty of my waffle, by far the best thing about this day. Once we all had our plates in front of us, Tom said, “Look, Roxane solved a case last year that even Frank couldn’t close. So hear her out. She knows her stuff.”

Tom shook his head, but he was smiling. “Yeah, she’s always like this.”

Sanko grabbed a saltshaker and liberally dusted his eggs with it, saying nothing.

“Maybe we can help each other out,” I offered. “I’ll tell you what I know, et cetera.”

“Not a whole lot,” I said. “But I do know that Marin’s got a pretty thin file, except for Arthur. How’d you connect her to him?”

I could tell Sanko didn’t want anything to do with me, but he looked at Tom and shrugged. “Well, he was in her phone as the emergency contact. You know, ICE. And she had his address on her driver’s license.”

“Well, I think I may have a new angle for you.”

I told them about the Herschede clock and the Craigslist ven- detta, but Sanko just glared at me.

“Oh, sure, like a freaking Craigslist post is the secret to this case. We already have a suspect, thanks. When you see hoofprints, look for horses. You ever hear that, Miss Weary?”

“No, never,” I said, “but it sounds very wise. What makes you so sure it’s that simple?”

I felt Tom tense up beside me as he contained a laugh. Sanko scowled thoroughly. “What makes me sure,” he snapped, “is what the staff at the Guild House had to say about them two, okay?”

We all chewed in silence for a minute or so. “Well, what did they have to say?” I asked finally.

He let out a put-upon sigh and looked at Tom again in a way that made me wonder what Sanko  owed him. Then he said, “The restaurant was this close to asking them to leave.” He held his thumb and forefinger a hair apart. “One of the waitresses thought they might need to call the police, but then Marin got up and left on her own. Apparently they were screaming at each other. Eff this, eff that, eff you, and so on. Arthur threatened to kill her.”

“Way,” Sanko said. He reached into his blazer and pulled out a small notebook and flipped backward through its pages. “He said, and I quote, ‘You lying cunt, I could just put my hands around your pretty little neck and squeeze the life outta you right now.’ ”

Next to me, Tom shifted his weight. I cleared my throat. I didn’t like the sound of this at all. “But Marin was shot, not strangled,” I said a little feebly. “And she got up and left. Do you know how much time passed between when she left and when Arthur did?”

“What time was Arthur’s check paid? There should be records.” “You think I didn’t check that?” Sanko said.

That was exactly what I thought.

He continued, “He left without closing out his check. He dropped a pile of cash on the table. So no, we don’t know how much time. Marin walked out of the restaurant just before eight-thirty. Ungless ordered another drink at eight-forty. It was after nine when his waitress completed his cash payment in the computer. He was already gone by then, and no one can say exactly when he left. I don’t know why I’m even telling you this.”

“The drink he ordered. Did he finish it?”

“He had plenty of time to catch up with her, if that’s what you’re asking.”

We chewed in silence for a while longer.

“I don’t need you involved here any further. This case is winding to its inevitable conclusion.”

“So,” Sanko said eventually, “he’s got no alibi. He’s got a hell of a motive, means, and opportunity, and in fact was seen by a restaurant full of people threatening to take Marin’s life less than an hour before she was killed. That’s pretty solid, in my opinion. Which brings me to my point—I don’t need you involved here any further. This case is winding to its inevitable conclusion. I gotta piss and then we need to go, Heitker.”

I had to admit that his theory seemed valid. If we were talking about someone I wasn’t working for, I might have even agreed with him. But we weren’t, so I didn’t. I sighed and put down my fork. My window was closing fast. “Any chance I could see her cell phone?” I said.

“Are you checking out the numbers she called?”

Sanko gave me a tight little smile and squeezed out of the booth without responding.

As he walked away, I tried, “Have you found her vehicle yet?” But Sanko didn’t answer that either.

Tom let out a heavy sigh. “He told me he was going to be nice to you.”

I got up and switched seats so I was facing him. “Honestly, I think that was being nice, for him. And to think I even considered buying you both breakfast.” I reached across the table and picked up my tea, which I had barely touched. “So what do you think? Really.”

Tom thought about that for a second. “I think I want the rest of your waffle. Is that weird?”

He was holding his fork expectantly.

I added, “But go for it. What do you think about this case?”  He cut off a section of my waffle and moved it to his plate.

“Seventy-five grand? Cash like that can buy a lot of trouble. It doesn’t look great for your guy.”

“Lying cunt doesn’t make him terribly sympathetic, does it?” “No, not exactly. But you’re pretty sure about him?”

He nodded. “Those famous Weary instincts.” He gave me a smile. “You want me to look into her vehicle at least, see if it’s been recovered yet? I think that’s worth checking out.”

Our eyes met for a moment and I felt myself smile too, for the first time all morning. “Would you?”

“Sure,” Tom said. Sanko stomped back to the table and stood there, tapping his foot. Tom stood up and pulled out his wallet and tossed a twenty on the table, shooting me a wink. “I’ll let you know,” he said, holding his hand up like he wasn’t sure what to do with it. Then he dropped it to my shoulder and squeezed. “See you.”

As soon as he was gone, the waitress brought the check over. “You two are always so adorable together,” she said.

From What You Want to See. Used with the permission of the publisher, St. Martin’s Press. Copyright © 2015 by Kristen Lepionka.

What Can Be Learned from a Killer's Burial Site? 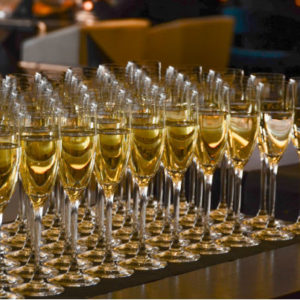