On the Blurred Lines of Noir and Sci-Fi

Raymond Chandler has been dead for over 50 years, yet his influence over the detective novel has remained intact. But Chandler has also cast a long shadow over another genre with its roots in pulp magazines—namely, science fiction. Both genres have, over the last few decades, gone through a number of permutations and have earned an increased critical acclaim—and yet, a mocking letter that Chandler wrote to his agent in 1953 continues to (understandably) get under the skin of numerous writers. You don’t have to look too hard at the spines of books filed under fiction in order to find a strange melding of noir and science fiction—a surreal overlap that’s produced some wonderfully strange narratives over the years, some of which has arisen directly from Chandler’s own tongue-in-cheek provocation.

“Did you ever read what they call Science Fiction? It’s a scream,” Chandler’s letter begins. From there, he goes through a decidedly archetypal narrative, brutally overwritten, that reads like contemptuous parody. One representative passage? “My breath froze into pink pretzels. I flicked on the heat bars and the Bryllis ran swiftly on five legs, using the other two to send out crylon vibrations.” The first time I encountered this passage was in a science fiction anthology, where one of the writers had opted to write a story that incorporated Chandler’s increasingly ludicrous narrative into one that, in context, made much more sense. But these offhand remarks have continued to linger on the margins of modern thought—some writers have noted that Chandler inadvertently created Google as a side effect of his short narrative.

The setting of Made to Kill is an altered 1965: John F. Kennedy is president, the Cold War rages on, and American society has had an unsuccessful dalliance with incorporating robots into everyday life. The last survivor of this program, narrator Ray Electromatic, is the detective at the center of this novel, drawn into a conspiracy involving Hollywood stars, radioactive material, and Soviet spies. Ray makes for an interesting protagonist in a number of ways: as robots go, he has an unexpected moral compass, and the fact that his memory only lasts for a day does a good job of establishing him as a less-than-reliable narrator from the outset.

Chandler isn’t the only mid-century American writer whose work is riffed upon in Christopher’s novel. The presence of supporting characters with names like Spillane and Parker are knowing nods to the world of detective fiction, for one. The radioactive material generated by the conspiracy in which Ray becomes enmeshed bears some similarity to the plot of Kiss Me Deadly, the 1955 film version of one of Mickey Spillane’s Mike Hammer novels, which both adapted and critiqued its source material, all the while throwing plenty of nuclear-era anxieties into the mix.

Readers with a background in classic science fiction will also notice a subtle running joke about Ray’s career–early on, the reader learns that Ray was reprogrammed, and now makes the bulk of his money as a hired killer rather than as a detective. This was a choice made out of self-interest by Ray’s equally mechanical supervisor Ada–and it’s a nice inversion of Isaac Asimov’s Three Laws of Robotics, which emphasize robots preventing injury from befalling humans at all cost. Asimov utilized this as the backdrop for several novels, including The Caves of Steel and The Naked Sun, that partnered human detective Elijah Bailey with the robotic R. Daneel Olivaw to investigate a series of crimes across the galaxy–in other words, another science fictional riff on a traditional detective story. Christopher’s book may be a detective novel with an investigating robot at its center, but it’s a break from what’s come before–aware of when to embrace tradition and when to eschew it.

Christopher isn’t the only writer to take inspiration of a sort from Chandler. A memorable quote from Chandler’s novel Playback, “the subject was as easy to spot as a kangaroo in a dinner jacket,” gives rise to a central image in Jonathan Lethem’s 1994 novel Gun, With Occasional Music. In this book, set in the future, hybrids of humans and animals dot the landscape; here, the kangaroo in a dinner jacket is exactly that. There is a classically noir plotline in the book, as detective Conrad Metcalf faces off against a growing conspiracy, but there’s also a more ominous component that seems adapted from a particular strain of science fiction. In this future landscape, readers will note a growing lack of literacy, as texts in newspapers ebb away in favor of images. In a 2010 essay on the novel, Elizabeth Bear referred to its setting as “a world that has outlawed narrative”–both sinister and fitting, a way of ratcheting the detective-novel tropes way beyond expectations.

In an interview with The Paris Review, Lethem talked about his influences on the novel—first, of seeking “the exact midpoint between Dick and Chandler,” and, later, of a more specific set of influences. “I fused the Chandler/Ross MacDonald voice with those rote dystopia moves that I knew backwards and forwards from my study of Ballard, Dick, Orwell, Huxley, and the Brothers Strugatsky,” he said—and it’s probably telling that more than a few of the writers in the ostensibly science fictional column have a detective novel or two to their name as well. In recent months, a new edition of the Strugatskys’ The Dead Mountaineer’s Inn, subtitled “One More Last Rite for the Detective Genre,” was released in the United States.

The juxtaposition of speculative fiction and detective stories can take on an even blurrier aspect. China Miéville’s 2009 novel The City & The City, for instance, is as head-spinning in its central concept—two micro-nations, Beszel and Ul Qoma, that occupy the same geographic space—as most of his more overtly fantastical fiction, but this particular work remains more grounded. Miéville has spoken of his original intent to subtitle it “The Last Inspector Borlú Mystery,” a nod to the trappings of police procedurals. In a 2011 interview with BLDGBLOG, Miéville clarified that his inspiration had been deeply fictional. “[F]or me, the big touchstones here were detective fiction, not real police,” he said. “Obviously they are related, but they’re related in a very convoluted, mediated way.”

Later in the interview, Miéville wrote about hearkening to “certain generic protocols of policing and criminology.” And in a 2009 essay written for John Scalzi’s website Whatever, Miéville went even deeper into the idea that detective stories were, in fact, a realm that could be as mythical, as phantasmagorical, and as fundamentally unreal as anything filed under science fiction or fantasy. And, as one might expect, in his enumerations of fictional detectives, Raymond Chandler’s Philip Marlowe came up. “The various manly Virgils who appear ex nihilo to escort Marlowe through his oneiric purgatories are not characters, but eloquent opacities in man-shape: much more interesting.”

It’s an unexpected way of looking at the genre—and a potentially liberating one at that. And, perhaps, it’s a kind of reclamation as well, a sense that the many-legged Bryllis is no more unreal than the landscapes and characters that Chandler’s own protagonists encountered. On one hand, there’s the creation of science fiction stories along the lines that Chandler helped popularize; on the other, there’s a way to read Chandler’s original work with a kind of memorable surrealism all its own. Chandler sparked something in 1953, and the stories that have arisen from his dismissal of a genre have developed a life all their own. 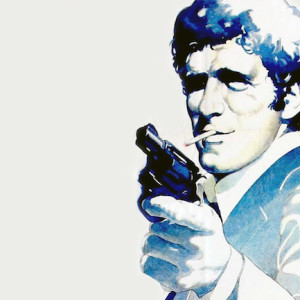 “He did not write about crime or detection... He wrote about the corruption of the human spirit” –George V. Higgins...
© LitHub
Back to top