Which International Thriller Should You Binge This Weekend? July 4th Edition

Families on the run, gangsters in Berlin, and spies in Warsaw.

Sure, you could celebrate Independence Day by looking inward and bingeing some homegrown series (if that’s your inclination, let me recommend the criminally under-seen and sadly no longer in production Briarpatch, an excellent Ross Thomas adaptation), or you could follow the revolutionary spirit in a more internationalist direction and look abroad for your extra day’s worth of entertainment. What’s better at the midsummer mark than a border-crossing thriller, after all? Here are a few recommendations for you.

If you’re really looking for some wild, international thriller energy for your long weekend, The Mosquito Coast is your best bet. Adapted from the Paul Theroux novel by Neil Cross and Tom Bissell, and starring the author’s own nephew, Justin Theroux (seriously, this is a weirdly big project for Theroux-heads), The Mosquito Coast follows a family, headed by a somewhat manic inventor, as they go on the run from the US, headed south through Mexico to Central America, with mysterious and dangerous forces closing in on them from all over. The show has some excellent pacing and balances its tones well, with a twisted wit underlying the dark, foreboding storyline. In short, you’re going to want to tear through this, a perfect weekend binge.

The Innocent
Streaming on: Netflix
Seasons: 1

The latest entry into the sprawling world of Harlan Coben stories on Netflix, The Innocent has all the usual everyman-put-through-the-ringer-of-fate qualities we’ve come to expect from Coben, who unspools his stories like a modern-day Hitchcock. In The Innocent, a Spanish production, our main character goes through more jolting life experiences than I could possibly explain here (or follow, frankly), but essentially he accidentally kills a man, serves some time, gets out, gets married, then gets some incriminating text messages that throw his marriage into disarray. For the rest, you’ll have to watch yourself. It’s a pretty wild ride and compelling throughout.

4 Blocks
Streaming on HBO Max
Seasons: 3 (only one available in US now)

This is a gritty series, the buzziest of German crime dramas for a while now, featuring a charismatic performance by Kida Khodr Ramadan and plenty of vice and mayhem in Berlin. The story tracks a Lebanese family that runs drugs and other rackets in the German capital. Following an arrest, the family is thrown into chaos and enters a bit of a succession fight. The action comes fast, the streets are tough and neon-drenched, and it’s a glimpse into contemporary European crime that we haven’t before seen on these shores.

If you like your spies to be of the old Europe, gentleman variety…

This one isn’t exactly a new release (it came out in 2013), but it has returned to Amazon Prime, and Independence Day, with all its patriotic mythology, seems as good a time as ever to dive into the cosmopolitan and morally complex works of Alan Furst. (There should be more adaptations, shouldn’t there? I for one would welcome a complete rendering—each season a new Resistance movement, please.) In Spies of Warsaw, David Tennant stars as Jean-Francois Mercier, nominally the military attache at the French Embassy in Warsaw in the lead-up to WWII. He’s also an officer of the Deuxieme-Bureau. That means he’s to engage in some espionage, which starts out fairly light but gets a great deal heavier for obvious reasons. Tennant turns in an interesting performance and the spygames keep things moving right along, as do the atmospherics of pre-war Poland and the many embassy parties. 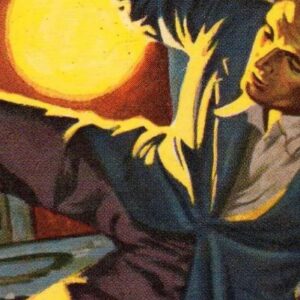 Erle Stanley Gardner was in a quandary. Even something of a snit. The year was 1936, and as crime writer/critic Dorothy B. Hughes...
© LitHub
Back to top