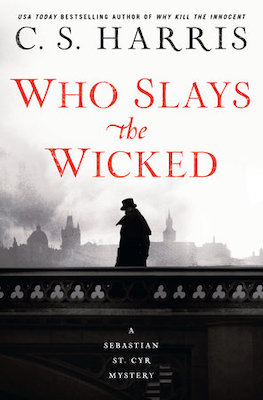 The following is an exclusive excerpt from Who Slays the Wicked, the latest Sebastian St. Cyr Mystery from C.S. Harris. When Lord Ashworth is found brutally murdered, Sebastian is called in to investigate, but the case turns personal when his young cousin—Ashworth’s wife—is the prime suspect.

His name was Sir Felix Paige, and he’d been a friend of Ashworth since the two were boys together at Eton. Sebastian had been at Eton at the same time, but he’d never called either man a friend.

Unlike Ashworth, who’d been born into his position as his father’s heir, Paige began life as the younger son of a younger son. At the age of seventeen, rather than going off to Oxford or Cambridge, he’d bought a pair of colors with his uncle’s assistance and headed to India to make his fortune. Instead, he’d nearly died there—first of fever, then from a nasty head wound acquired at the Battle of Assaye. Sent home to recuperate, he’d had the good fortune to bury, in short order, his father, his uncle, his uncle’s childless only son, and his own unmarried elder brother. Having thus unexpectedly acceded to the family’s title and fortune, the new Baronet immediately sold out and settled permanently in London, visiting his estates only during hunting season.

Like Ashworth, Sir Felix was a Corinthian, a sportsman with a reputation as a bruising rider who spent hours at both Angelo’s fencing academy and Jackson’s boxing saloon in Bond Street. It was there that Sebastian found him going a couple of rounds with Gentleman Jackson himself.

Sebastian stood for a time leaning against a nearby wall as the two men sparred. Paige was a tall, lanky fellow with sandy hair, a high forehead, and a mobile, expressive face that habitually seemed to be breaking into a broad smile—although the smiles rarely reached his pale blue eyes, which were watchful and assessing.

Sebastian was impressed with the Baronet’s footwork and science and the way his intense focus on his opponent never wavered. But Sebastian could tell the man knew he was there, and that he resented the scrutiny. When the last round ended, the Baronet looped a towel around his neck and walked up to him.

“I take it you’re here for a reason,” said Paige, his face gleaming with sweat and his chest lifting with his labored breathing.

Sebastian pushed away from the wall. “You’ve heard about Ashworth?”

Something flickered across the Baronet’s rawboned features, an unreadable expression that was there and then gone. “I have.”

“You were one of his closest friends, were you not?” Sebastian paused a perceptible moment, then added, “Especially now that Rowe is dead.”

“I never knew Rowe well. But Ash and I were friends, yes. Old friends.” The Baronet’s words were as guarded as his eyes.

“Who do you think killed him?”

Paige brought up a hand to swipe one end of the towel across his sweaty face, then turned toward the dressing rooms. “I have no idea.”

“No?” said Sebastian, keeping pace with him. “Yet you must have some idea who his enemies were.”

Paige glanced sideways at him. “I didn’t exactly keep a list, if that’s what you’re asking.”

“Were there so many?”

“Most men have enemies.”

“But Ashworth had more than a few?”

Sebastian said, “When was the last time you saw him?”

“Yesterday afternoon, actually. At Tattersall’s. Why?”

“Did he happen to mention how he planned to spend the evening?”

Paige stripped off his sweaty shirt and went to pour water into a basin. “Meaning—what?”

“Was he nervous? Angry? Upset?”

Paige shook his head. “Hardly. If anything, I’d say he was in good spirits. He usually was.”

“You heard how he was found?”

Paige’s mouth thinned into a flat line. “I heard.”

“You’re familiar with the sort of games he liked to play?”

Paige froze in the act of washing his hands. “No.”

The Baronet’s nostril’s flared on a quickly indrawn breath. “Suit yourself. But call me a liar again, and you’ll meet me for it.”

“If you found his activities so distasteful, then why stay friends?”

“That was none of my affair.”

“I suppose that’s one way of looking at it.” Sebastian watched Paige bend over the washbowl and splash his face. “You wouldn’t happen to know the name of the woman Ashworth was with last night, would you?”

“There wasn’t anyone in particular he’d been involved with lately?” Paige looked up, his face dripping.

“I take it there is someone?” said Sebastian.

Paige reached for a clean towel and dried his face. “Ash always did like dangerous women. He saw them as a challenge.”

“So who was his most recent ‘dangerous woman’?”

They were alone, but the Baronet still cast a quick look around and lowered his voice. “You’ve heard about this Grand Duchess who’s in town?”

There was only one Grand Duchess in London who mattered: Catherine of Oldenburg, the attention‐loving, Russian‐born sister of Tsar Alexander. “You aren’t seriously suggesting that Ashcroft was involved with Grand Duchess Catherine?” said Sebastian. “She’s only just arrived.”

Paige shook his head. “Not her; one of her ladies. Ivanna is her name; Princess Ivanna Gagarin. She’s been here for weeks.”

Sebastian studied the other man’s face, looking for some evidence of subterfuge. He saw none. “You’re certain?”

“That she was with Ash last night? No, of course not. I’ve no idea. But I understand she does like to play his kind of games.”

Sebastian watched Paige pull a clean shirt over his head. “Who else has he been playing his games with lately?”

Paige gave a faint smile and reached for his cravat.

Sebastian said, “Out of curiosity, where were you last night?”

“And then you went home?”

“Yes. I made an early night of it.” The Baronet kept his gaze on the mirror, his focus on the intricacies of his neckcloth. “Please tell me you aren’t seriously suggesting that I might have had something to do with what happened to Ash. I understand your compulsion to try to protect your niece, but you won’t do it by shifting the blame to me. Believe me, you’ll have far better luck with Princess Ivanna.”

Paige turned from the mirror, his eyes now crinkled with genuine amusement. “Look into her. You’ll see.”

From WHO SLAYS THE WICKED. Used with the permission of the publisher, Berkley. Copyright © 2019 by C.S. Harris.

Sandy Fawkes: The Reporter and The Serial Killer

A New Theory in the Mystery of Jack the Ripper 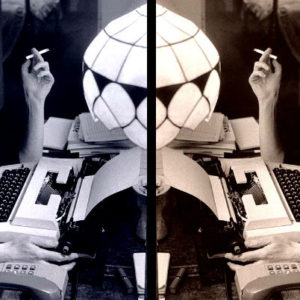 Sandy Fawkes: The Reporter and The Serial Killer Sandy Fawkes landed in Atlanta on the night of November 7, 1974. She'd spent the day in Washington on a fruitless quest to interview...
© LitHub
Back to top