Who Watches The Watchers?
Spoiler Alert: We Do

On The Many Visions of Voyeurism in Crime Fiction

What is a voyeur? If you consult the dictionary, a voyeur is someone who gains sexual pleasure from secretly watching other people when they are naked or engaging in sexual acts. In reality, we all use the word in a much broader sense, to mean someone who enjoys watching others when they don’t know they’re being watched: a non-reciprocal gaze. Not surprisingly, voyeurs, and what I am going to call watchers, abound in crime and mystery fiction: staring via two-way mirrors, spying through surveillance cameras, peeping from behind trees, and peering through train and car windows. But what about us, the readers of these novels? Aren’t we also looking at characters that can’t look back and feeling some kind of emotion—pleasure, disgust, excitement—from that non-reciprocal gaze? When we read we make judgements about characters and actions. Does that make us in some way complicit in the crimes committed between these pages?

There are crime novels that feature voyeurs using the traditional definition: Sliver by Ira Levin and Tarantula by Thierry Jonquet, for example. There are surely others, but the research was beginning to make me a little queasy. (In Sliver, an apartment block owner watches his tenants through cameras installed in the rooms, and in Tarantula, Richard watches Eve through a mirror while she is forced to have sex with other men.)  And there are thousands of crime novels that feature watchers.

Like the voyeurs, many watchers in these novels are men. And when they are, they often commit the most horrible crimes. In The Collector by John Fowles, Frederick Clegg watches Miranda from doorways and from windows: “When I had a free moment from the files and ledgers I stood by the window and used to look down over the road over the frosting and sometimes I’d see her.” And every time he sees her he puts a X in his observations diary kept to record butterflies. He kidnaps Miranda and keeps her locked in a cellar in his house.

But what about us, the readers of these novels? Aren’t we also looking at characters that can’t look back and feeling some kind of emotion—pleasure, disgust, excitement—from that non-reciprocal gaze?

Butterfly collecting isn’t the worst of it. Watchers, whether male or female, are nearly always a little odd: Mr. Hilditch in Felicia’s Journey by William Trevor has small hands and a high-pitched voice. He’s the catering manager in a factory and likes to watch the girls and the apprentices in the canteen (in fact, “Mr. Hilditch likes to watch it all.”) He also likes to watch Felicia after they meet accidentally, by following her in his car, and “drawing in to the curb, allowing her to move almost out of sight before he drives on slowly in pursuit.” What Felicia doesn’t know when she accepts a lift from Mr. Hilditch is that the man is a serial killer.

If one watcher at a time isn’t enough, Patricia Highsmith provides three in one novel in The Cry of the Owl. Robert who spies on Jenny through a window while she does her “calming” household duties, Jenny who later follows Robert to his new home, and Greg who watches Robert and Jenny together at night: “Lights were blazing in the house now. He imagined them laughing and talking and fixing dinner, Jenny making one of her big salads, and then—Greg couldn’t bear to imagine any more.” In fact, Highsmith probably has one of the greatest numbers of watchers across all her novels, from The Price of Salt to The Talented Mr. Ripley.

In The Cry of the Owl, Robert says to his therapist, “I have the definite feeling if everybody in the world didn’t keep watching to see what everybody else did, we’d all go berserk. Left on their own, people wouldn’t know how to live.” Perhaps reading fiction gives us that extra fix when scrolling through our ex’s photos on Facebook isn’t enough. But it’s when fictional watchers are also first-person narrators that things get really interesting. That’s when we readers have no choice but to enter the head of the watcher. One of the pleasures of a good book is being immersed in another person’s psyche however uncomfortable or disgusted we might feel. In fact, reading is one of the few art forms that allows us to be someone else for a while without any of the danger. But how complicit does that make us?

In Zoe Heller’s Notes on a Scandal, older teacher Barbara becomes obsessed with Sheba, a fellow teacher who is arrested for having sex with an under-age student. Barbara ticks all the boxes for being a watcher—a little odd, obsessive about one person, and convinced she herself isn’t doing anything wrong. From the outset Barbara is a watcher, observing Sheba arrive at the school on her first day, and then standing back and scrutinizing Sheba when she is introduced to the teaching staff. Barbara watches Sheba at any opportunity—in close up and from a distance through classroom windows: “She was laughing . . . throwing her head back so that I could see her long white neck and the two dark pinholes of her nostrils.” Barbara is pedantic and unreliable, and yet because the novel is written in the first person from Barbara’s point of view, we’re drawn in so close we have to stand alongside, our eyes open while we too examine Sheba, who is unable to look back at us. “I took the opportunity, while Sheba was explaining her jewellery, to examine her face more closely . . . Her face was longish and thin, her nose ever so slightly crooked at the tip. And her eyes—no, not so much the eyes, as the eyelids—were prodigious: great, beige canopies fringed with dense lash.” It is as though we have on some invisibility cloak and are only inches from her face, seeing every pore and blemish, while poor Sheba is unaware of our presence.

Drunken or otherwise, watchers have a tendency to embellish. It seems to be in their nature…

Barbara is a fascinating woman because her odd and complex traits are inherent to her character. In contrast, a couple of novels published in recent years give female watchers an easy opt-out for their suspect behavior: usually alcohol, although perhaps this allows for a more satisfying ending, since they are capable of redemption and reformation by coming off the booze.

Drunken or otherwise, watchers have a tendency to embellish. It seems to be in their nature, and if the book is narrated by an unreliable narrator, we readers have no choice but to go along with the story, all the while back-pedalling as we try to work out the truth. In The Virgins by Pamela Erens, first-person narrator Bruce is a watcher from the first line: “We sit on the benches and watch the buses unload.” He and his friends “check out” the “bodies and faces” as the new college students arrive at the start of term. It’s seedy but still fascinating, because haven’t we all spent time people-watching in restaurants or in queues? Although that first word—we—is actually Bruce and his friends, its clever use draws the reader in, and suddenly we—the readers—are also watching Aviva as she gets off the bus, “her eyes . . . heavily made up, blackened somehow, sleepy, deep.”

In my most recent novel, Bitter Orange, Frances is a first-person narrator who finds a hole in her bathroom floor, through which she can spy on her neighbors. She, too, is a little odd, socially awkward, and lonely. She knows that spying is wrong, but she cannot resist looking; something I hope readers will wonder if they themselves could resist. So you see, watchers and voyeurs come in all shapes and sizes, as well as genders. They might be evil, benign, sober or drunk. You might be able to spot them from their small hands, their butterfly collection, or their penchant for turkey pies. But be careful who you’re judging when you’re horrified by a fictional watcher or voyeur, and remember that readers—you included—could be considered guilty of the same crime.

Claire Fuller was born in Oxfordshire, England in 1967. She gained a degree in sculpture from Winchester School of Art, but went on to have a long career in marketing and didn't start writing until she was forty. She has written three novels: Our Endless Numbered Days, which won the Desmond Elliott Prize, Swimming Lessons, and Bitter Orange, forthcoming October 2018. She has an MA in Creative and Critical Writing from the University of Winchester and lives in Hampshire with her husband and two children. 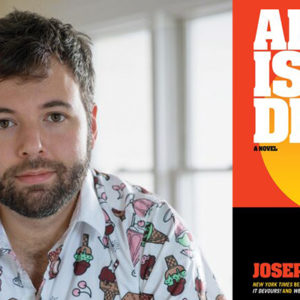 In 2012, Joseph Fink and Jeffrey Cranor launched Welcome to Night Vale and changed the podcasting game forever. A twice-monthly...
© LitHub
Back to top