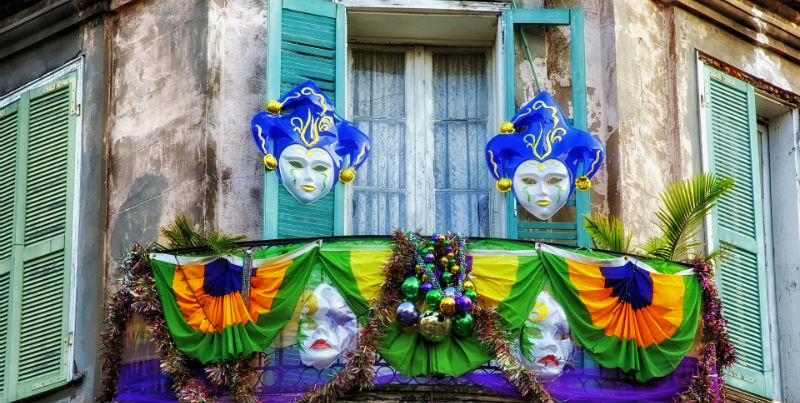 Never Use Gumbo as a Metaphor. But Don't Miss the Parades.

A couple of years after I’d started the Maureen Coughlin series I talked with a friend about the challenges inherent in writing about New Orleans. The first rule, we decided, was to avoid cliché. It’s tougher than it sounds, writing about a city people think they know. So much about New Orleans is so strange, and requires explanation. It makes the familiar tropes more tempting than I’d like to admit. Also many clichés are rooted in truth. I can vividly remember sitting under a tin roof in the rain, listening to WWOZ radio, eating BBQ shrimp and drinking Abita beer, all the while discussing with friends if the TV series Treme relied too heavily on preconceived notions of New Orleans.

I’d made a list, I told my friend, of things I would avoid. My characters would not play the trumpet. I would never use gumbo as a metaphor. Not jazz, either. Or voodoo. And I would certainly never have a horn player leaning on a lamppost in the French Quarter fog and wondering who was using voodoo to murder Bourbon Street strippers. And I would definitely, absolutely, never write about Mardi Gras. Because these things have been done enough, I said. Sometimes they’ve been done really well, and sometimes pretty poorly, but definitely enough.

My friend stopped me at the subject of Mardi Gras. He reminded me that I’d lived only blocks off the uptown parade route for over 15 years. That I’d been tending bar for over a decade in a variety of neighborhoods. These experiences, he argued, gave me a view of Mardi Gras from the inside out that other people didn’t have.

“If you wanted to, you could write,” he said, half-kidding, “the first great ‘Mardi Gras sucks’ novel.”

I had no time to write about Mardi Gras, I countered, not when there was so much more to say about New Orleans. But the conversation had put a bug in my brain. This idea of Mardi Gras from the inside-out lodged in my imagination. And one day, my agent floated the idea of a standalone Maureen Coughlin novel. Something consistent with the series but featuring a self-contained story. That old conversation popped right back into my head. Maureen’s first Mardi Gras. My chance to tell my Mardi Gras story.

Most people’s idea of Mardi Gras starts and stops with what they’ve seen on Cops, Girls Gone Wild, and whatever they’ve come across on YouTube. I had my own mother ask me once how I live with “those crazy people.” Those crazy people, I explained, don’t live here. Those crazy people are from other places. That was the Mardi Gras people already knew; the postcard and TV New Orleans so readily available to the rest of the world was not the Mardi Gras I wanted to show.

My characters would not play the trumpet. I would never use gumbo as a metaphor. Not jazz, either. Or voodoo…And I would definitely, absolutely, never write about Mardi Gras.

Fat Tuesday is always the day before Ash Wednesday, but its date is changeable. The season of Mardi Gras starts on the same date every year: January 6, the Feast of the Epiphany, or Twelfth Night. On that night, parades of varying styles and sizes start throughout the city. The largest and most famous parades happen over the last two weeks of Carnival, the gigantic super-krewes such as Muses, Bacchus and Thoth rolling on the last weekend before Fat Tuesday. The biggest parades feature over three dozen floats and upwards of 3,000 riders. And that’s not counting marching bands, flambeaux carriers, dance troupes, walking clubs, etc. that also participate. On the final two weekends, half a dozen parades can roll on the same day. The primary route for these parades is going uptown along St. Charles Avenue to Canal Street and the edge of the French Quarter.

On average, 1.5 million people—about twice the population of the city—will visit for Carnival, most of those visitors concentrated in those last two parading weeks. The biggest parades attract tens of thousands of parade-goers, clustered for hours—eating, drinking, dancing—around a four-mile stretch of city streets. A Mardi Gras parade of even modest size is an enormous undertaking, and the NOPD is everywhere along the route from start to finish. That’s a lot of cops. And that’s why during parade season, every officer, regardless of rank and title, spends time in uniform watching over the route, riding busses from their district houses to strategic spots along the route. Once you’re deployed, those few blocks are yours and your partners’ for the night, and whatever happens in your patch—from lost children to gun violence—is on you to manage. It’s a tough assignment, but one that made for a great opportunity. The parades would be the perfect setting and I had the perfect character for it. Maureen would have to be out in the streets, out in the thick of the action and celebration for days on end.

Originally, the book started on the last Thursday of the season, during the Krewe of Muses parade. From there, for the next five days, the case and the chase would take Maureen across the city. That way I could show the details that make the holiday so special. I could feature the smaller parades and esoteric neighborhood traditions. The story would wrap up on Fat Tuesday morning in the Marigny neighborhood, at the St. Anne parade. But I quickly realized I’d set myself too large a feat. Explaining the intimate nooks and crannies of Mardi Gras to the uninitiated would take a thousand pages, and very well might make one of the world’s great parties sound pretty damn boring. So I did what I often do when an idea dead-ends: I tried the opposite approach. What about instead of writing a sprawling epic, I built a tense Mardi Gras pressure cooker? That idea had legs. I watched movies like Dog Day Afternoon and 25th Hour for research. As I worked, I squeezed the story down from 24 hours to one night—and finally to a single parade. The final story takes place during the Krewe of Muses, over the course of four hours, covering about a mile and a half of parade route. I put Maureen through her paces in her dedicated patch of parade route and called it The Devil’s Muse.

While trying to imagine what working the parade was like (I’d been to lots of parades, but not as a cop), I was lucky enough to have a veteran member of the NOPD help me understand how the department works to keep order along several miles of percolating chaos. I got a good lesson in being willing to learn about things you thought you already understood.

He explained that while plenty of undercover officers work the route, visibility is crucial to crowd control. That was a reason uniformed officers are deployed every couple of blocks in pairs and teams. These officers are not in body armor or riot gear, but work in standard blue uniforms, often with little more than a bright yellow safety vest and weather-ready gear. Intimidation is not useful, as they seem to be a constant presence. They talk to the crowd. They share the parade-route food. They nod their heads to the beat of the marching bands and catch beads from the floats. Veteran officers are often deployed to the same spots, where they interact with the same families year in and year out. They laugh. They hug people. They participate. The officers seem built into the environment, as natural a part of the event as the high school marching bands, as the oak trees along St. Charles Avenue. On the other hand, watching people ride horses through the city streets can seem pretty unnatural. Which was why I’d always thought intimidation was the purpose of those mounted officers patrolling the edges of the route. He explained to me that while that effect didn’t hurt, they also provided another kind of visibility: on horseback, mounted officers can see above and into the crowd, and could serve as vigils during an incident, spotting when someone has a weapon, for example. And, in a real emergency, a horse is an extremely effective method of parting that crowd.

Veteran officers are often deployed to the same spots, where they interact with the same families year in and year out. They laugh. They hug people. They participate.

Overall, the officer illustrated for me a strategy of watchful, passive policing that I had found invisible until I saw it in action along the route.

One night during a parade, I watched two groups of teenage guys compete for the attention of a group of young women standing between them. Not far away, about half a dozen officers casually observed the same scene. As can happen, the men were soon paying as much attention to each other as they were to the women, only the attention was not friendly. Things got tense. The two groups of young men edged toward each other, barking and threatening. Chatting and relaxed, three cops detached from their group and strolled through the scene. They talked to no one but each other. They confronted no one in any of the three groups. They put their hands on no one. But the two hostile groups stopped sniping and drifted apart. I could see the pressure of the situation dissipate before my eyes as clearly as if I were watching a needle drop on a dial. No one was cowed. No one retreated. Everything just settled down. A marching band caught everyone’s attention and the threat of confrontation vanished.

Over and over that Mardi Gras, I watched as officers provided this vital function, releasing the pressure in the crowd before anything serious started. They weren’t always successful. Violence—especially gun violence—has crept up along the parade route as it has everywhere else.

But still, I walked home from parades most nights thinking about how many fights didn’t start, how much violence was avoided by people, police officers especially, not only exhibiting self-control, but employing it as an effective crowd-control strategy at a Mardi Gras parade of all places. It was fascinating watching people, police and civilians alike, working together to protect the party.

Learning just this little bit about how things worked along the parade route humbled me. I got a lesson in paying attention. And it changed The Devil’s Muse. I leaned into what Maureen could do with her eyes and her mouth and her brain, even in the midst of total chaos, and leaned away from what she could do with her fists and her gun. The book is better for it.

When it came to Mardi Gras, like a lot of people, I thought I knew what I was looking at, and that there was nothing more to say about it. If I hadn’t challenged that idea, I would’ve missed a big part of the real story.

Bill Loehfelm is the author of the critically acclaimed series about the New Orleans Police Department rookie Maureen Coughlin, as well as the standalone novels Fresh Kills and Bloodroot. His short fiction and nonfiction have appeared in several anthologies. He lives in New Orleans with his wife, AC Lambeth, a writer and yoga instructor, and their dog. He plays drums in a rock-’n’-roll band. 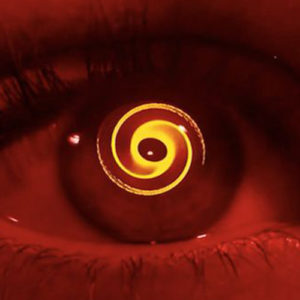 Crime fiction has a long tradition of characters who live with addictions, sometimes in control, sometimes under the control...
© LitHub
Back to top