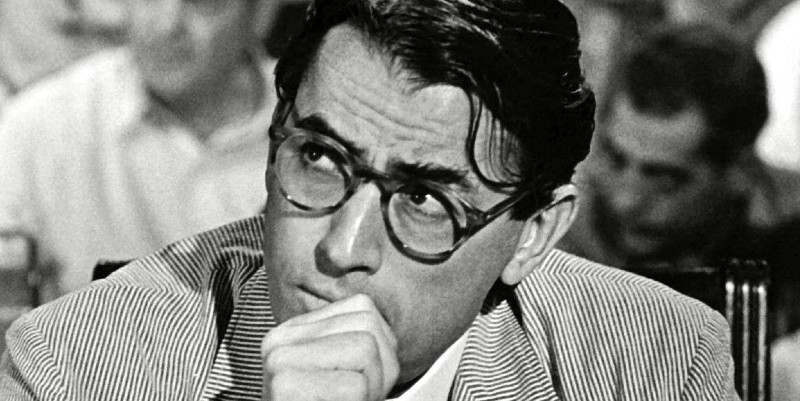 I’ve always wanted to be a lawyer, but every time I say this to an actual lawyer they tell me to be grateful I’m a writer instead. They may be right. Do I really want to spend three more years in school only to work 80 hours a week as an associate doing document review all day? Maybe not. But I’d love to argue for the rights of the accused in a small Southern courtroom created by John Grisham or Harper Lee. I’d love to work in Scott Turow’s Kindle County, or practice law out of the backseat of Michael Connelly’s Lincoln Town Car. If I’m being honest with myself, I think I want to be a lawyer in a story. I may never know how wide the chasm is between real lawyering and fictional, but a good legal story should make you think there is no difference at all.

As a screenwriter, and now as a novelist, I work with legal consultants to ensure that the stories I write adhere closely enough to real life to pass the smell test. In my upcoming book, The Local (Doubleday), my main character, James Euchre, is a patent attorney in Marshall, Texas. This setting is real, as is the job that James does, but the case he takes and the murder trial he acquires are entirely fictional. I spoke with several lawyers—from East Texas to New England, from close friends to family members—in my attempt to get it right. Ideally, the reader won’t be able to discern where the truth ends and the fiction begins.

There are good legal advisors and bad ones. I recently spoke with a lawyer who responded to most of the stories I was pitching with phrases like, “I don’t buy that,” and “It would never happen that way.” Those are the types of statements where ideas go to die. A good advisor will find a way to get a writer what they want while working within the parameters of the profession as they know it. A great advisor makes the story even better.

When I was writing The Local, I ran into a potentially catastrophic story problem midway through the manuscript. The entire premise rests on the conceit that a small-town patent lawyer is the perfect attorney to try a murder case because of his unique ability to connect with jurors in his hometown. The problem I encountered was that the crime I had constructed was not a local crime; it was a federal crime. I had written myself into a jurisdictional dilemma and I had no way out. I called Kathleen Cannon, a retired public defender in California with over 30 years of experience trying murder cases. “Is there any reason you can think of that a federal prosecutor would relinquish a high-profile murder trial to a local district attorney?” I asked. Cannon replied, “This is in Texas, right?” I was looking for an answer that would make my story believable, but she gave me one that made my story better. With few exceptions, the most stringent sentence for someone convicted of federal murder is life in prison. Why would the characters in my book want this particular defendant tried locally? Answer: The death penalty. If the prosecutors wanted the accused to potentially pay the ultimate price, the federal government shouldn’t be the entity that charged him; it should be the state of Texas. Thank you, Aunt Kathy!

Christian Rhodes is an attorney and a lobbyist in Louisiana. He is also a technical consultant on the Showtime series Your Honor, starring Bryan Cranston. “The actual practice of law is mind-numbing skullduggery, but courtroom stuff is one hundred percent an act… You beat the other actors by sticking to your script and making them go off of theirs.” I had asked Rhodes what makes legal fiction feel believable, but he chose to tell me why certain elements of courtroom practice are an act.

As an executive producer on Your Honor’s upcoming second season, I have the pleasure of speaking with Rhodes regularly about stories we are developing in the writers room. The show is set in New Orleans. In addition to being an attorney, Rhodes is also from the city where our show takes place. The legal profession is as varied as the states, cities, and individual courtrooms in which it is practiced. Many great legal stories rely on the unique aspects of their settings. There is no substitute for the personal and biased opinions of a local resident. If a writer isn’t from that place, they need to speak with people who are because those people will explain things in a way that only a native resident can. Rhodes told me, “The best thing about most New Orleanians is that they will not seek to deny the flaws of their city.” I might use that as an opening line one day.

As a writer, my biggest concern with writing about the law is accuracy. Short of that, it’s believability. But when I asked Kathleen Cannon about her favorite legal fiction, she responded, “Can I start with the ones I don’t love?” For Cannon, the destructive stories aren’t the ones that are factually inaccurate, but rather the ones that impart lessons for the audience that lawyers like Cannon must implore people to unlearn when they sit on a jury.

Cannon sites the opening of every Law & Order episode. An ominous, unseen voice narrates: “In the criminal justice system, the people are represented by two separate yet equally important groups: the police who investigate crime and the district attorneys who prosecute the offenders…” When Cannon stands before a jury as the attorney for the accused, she references these words and asks, “What are we? We are the true defenders of the people.” She told me, “Those types of stories divorce people from identifying with the accused. So, most of my job is to humanize my clients.” As a defense attorney, Cannon says the deck is stacked against her. She is an underdog. Underdogs, I would argue, make the best heroes. Her job is not unlike that of a writer. She must tell the story of someone whose life is on the line, and she must tell that story in a way that is so persuasive that it evokes sympathy from her audience.

The notion of impugning the job of a lawyer had never occurred to me, likely because I hold the profession in such high regard. But Cannon’s words gave me pause. She spoke about Primal Fear, a 1996 film starring Richard Gere and Edward Norton, based on the 1993 novel by William Diehl. The story is about a defense attorney named Martin Vail who defends a young man accused of murder. Vail discovers that his client has a dissociative identity disorder; he appears to have split personalities, presumably as a response to the abuse and trauma he suffered in his youth. For his portrayal of the client, Aaron Stampler, actor Edward Norton earned an Academy Award nomination. It was a highly coveted role in Hollywood, one that many young actors desired. The role was compelling, it allowed for a showcase of one’s talent, and it contained one of the biggest twists in movies of that era: Stampler didn’t actually have a personality disorder. Stampler, like the thespian who portrayed him, was simply a very good actor.

While Primal Fear was both a critical and commercial success, Cannon calls it a missed opportunity, “one that really makes me angry to this day.” She remembers watching it for the first time and thinking, “Finally, they’re portraying the true nature of mental health as it pertains to an insanity defense, and then they undermine it completely, revealing the character’s disorder as fabricated, reinforcing the same tired trope that an insanity defense is nothing more than a legal ploy.”

I spend a great deal of time and energy attempting to ensure that my stories accurately portray the legal profession, but I rarely consider what impact they might have on the members of that profession. The Local is about an unlikely yet absolutely real little corner of the legal universe, a tiny Texas town that is home to an outsized number of patent infringement lawsuits. The federal court in the Eastern District of Texas has come under fire for many years. Its critics claim that this venue, this town in which no companies are based and no products are invented, has no business hosting patent infringement cases. They also lament the explosion of so-called patent trolling, the purchasing of old patents for the sole purpose of suing companies for allegedly infringing on those patents. My novel touches on these topics, but only a little.

What intrigued me about this story was the little town itself and the people who inhabit it. I was told the history of Marshall, Texas, and the Eastern District by several lawyers who live and work there. They love their home as much as Christian Rhodes loves New Orleans. I was drawn to the romanticism described by these attorneys as they spoke about the art of being great trial lawyers. They talked about the work they do and the cottage industry they’ve built with a sense of pride. I found it compelling, even if their version is admittedly biased. As Rhodes said of New Orleans, “I am proud of my city. I am also ashamed of its flaws.” I hope my book captures the pride of Marshall, Texas, as well as its flaws. 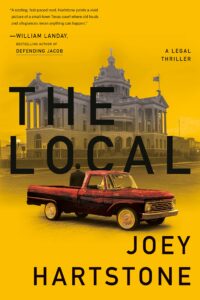 Joey Hartstone is a film and television writer. He has written two feature films, LBJ (2016) and Shock and Awe (2017), which were both directed by Rob Reiner. He wrote on the first two seasons of the legal drama The Good Fight. He is currently a writer on the Showtime series Your Honor. Joey lives in Los Angeles with his family.

5 Psychological Thrillers You Should Read This Month: June 2022

So you finished And Just Like That, binged all six seasons of Sex And The City, yet again, and you’re still (Samantha)...
© LitHub
Back to top