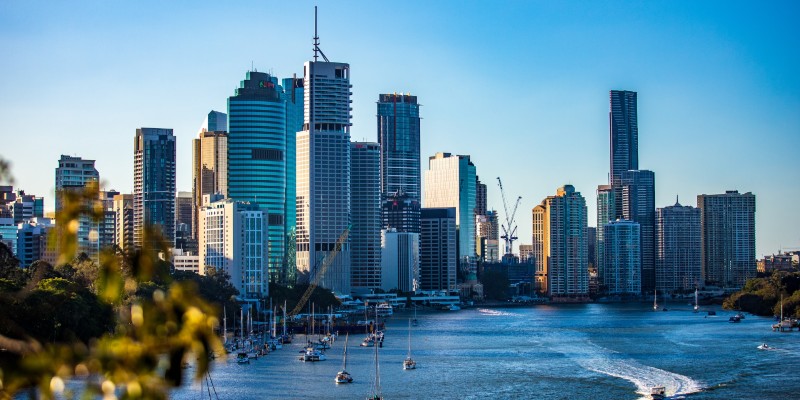 Crime and the City goes down under to a city with a legacy of corruption and plenty of stories to tell.

Brisbane, capital of Australia’s state of Queensland and the country’s third biggest city. Sitting on the banks of the Brisbane River (which has been known to seriously flood the town) and the northern end of the Gold Coast of long sandy beaches and surfing spots, it’s home to over two million people. Now Brisbane is an architectural mix of low rise colonial era buildings with cooling verandas and glittering new central business district skyscrapers. You get the contrast if you watch the hit Australian Broadcasting Corporation (ABC) show Harrow, about a Brisbane forensic pathologist with a healthy disregard for authority and an uneasy relationship with the city’s cops. Of course, despite the bright lights, there’s an underbelly too….

Let’s start back in colonial era Brisbane with The Mayne Inheritance (2001), a gothic thriller by Rosamund Siemen which opens with a mid-nineteenth century murder. The novel attempts to shed light on a 150-year-old unsolved mystery involving an insane butcher called Patrick Mayne and his family. Was it the murder victim’s money that founded Patrick Mayne’s business empire including the Regent Theatre & Brisbane Arcade, and later, the University of Queensland? It remains a subject of much historical research in the city.

Also harking back to colonial Queensland is Anne Infante’s novel Escape from the Past (2010) set on St Helena, once an island prison for men off the Queensland coast. Infante is a Brisbane author, singer and songwriter who has written extensively about Brisbane and Queensland. Escape from the Past is the story of one of the prison’s most famous inmates, William O’Meally, sentenced to life imprisonment for manslaughter. Having heard the story and visiting the island modern day reader Sally Cooper retraces O’Meally live and crimes finding that they open up dark parts of her own history.

Brisbane is perhaps the Australian city most associated with World War Two—it was General Douglas MacArthur’s South West Pacific HQ for the United States Army. JP Powell’s The Brisbane Line (2020) is set in a Brisbane during World War Two, menaced by the possibility of Japanese attack and filling up with American soldiers enjoying the city’s nightclubs and black market. Sergeant Joe Washington of the US Military Police is trying to supervise this rapid influx that often ends in petty crime, fights and worse. Then a dead American soldier is found dumped in a cemetery and Joe Washington has to deal with the possibly corrupt Brisbane detective Frank Bischof, who may be protecting local suspects.

Moving on to post-war Brisbane Andrew McGahan has written a number of novels ranging from The White Earth (2004) set in colonial Australia’s Outback, 1988 (1998) set in a remote weather station in Australia’s Northern Territory, Underground (2006) set in a futuristic far right wing Australia, Wonders of a Godless World (2011) set in a Gothic insane asylum, and Praise (1993), a Australian coming of age novel often compared to a kind of Trainspotting Down Under (also published in 1993). But it is McGahan’s Last Drinks (2000) that won Australia’s prestigious Ned Kelly Award for Best First Crime Novel and is set in Brisbane. It has been a decade since an inquiry into corruption tore the state of Queensland apart. But for George Verney, disgraced journalist and bit-player in the great scandals of his day, the scars linger. After ten years of self-imposed exile he reluctantly returns to Brisbane, a town he no longer recognises. Back in the city he is forced to move through a Brisbane underworld that has forgotten him.

Brisbanite Iain Ryan’s Four Days (2016) is set in 1980s Brisbane. Jim Harris is a hard-drinking Australian detective heading for a nervous breakdown forced to work with corrupt cops, and violent gangsters. Then a brutal murder brings back past indiscretions. to light. Harris has four days to locate the killer, four days to take revenge and, four days to find redemption. As well as Four Days Ryan has written The Student (2017), which is set close to Brisbane in rural Gatton, in the Lockyer Valley region of Queensland. Ryan has also written a trilogy of police procedurals set on a fictional island, Tunnel Island, set off Australia’s east coast and featuring Laura Romano, a disgraced cop and a drug addict and her partner Jim Harris. The trilogy starts with Drain Land (2016), then Harsh Recovery (2016), and finally Civil Twilight (2017).

Tony Cavanaugh is an Australian crime novelist, screenwriter as well as film and television producer (having written and produced some of Australia’s best loved and longest running drama shows). Cavanaugh is known for his Darian Richards series featuring the head of the state of Victoria’s Homicide Squad but Cavanaugh’s Blood River (2019) is set in Queensland. It’s Brisbane in 1999, heavy rain and the waters of the Brisbane River are rising. The floods reveal a series of mutilated bodies, the work of a serial killer. Brisbane cop Detective Constable Lara Ocean is assigned the case.

Australia is a major market for true crime books, TV shows and podcasts (see previous Crime and the Cities on Melbourne and Sydney) and Brisbane is no exception. ABC National Radio’s podcast The Thin Black Line is a gripping, and tragic, investigation by Allan Clarke into the infamous 1993 death in custody of Aboriginal teenager Daniel Yock. The podcast raises a variety of issues, specifically the bad relations between Aboriginal communities in and around Brisbane and the local police.

Editor Jack Sim has pulled together a compendium of twelve of Brisbane’s most notorious crimes in Bloody Brisbane: Murder in the River City (2005) including the Mayne Murder, Whiskey Au Go Go, Betty Shanks, Wickham Terrace Bomber, and the Vampire Killer. Sim has gone on chronicling the city’s underworld with More Bloody Brisbane Volume 2: Crime & Murder in the River City (2010).

And finally, as ever a special recommendation—and in this case from the true crime genre. Award-winning journalist Matthew Condon’s Three Crooked Kings (2013), the story of what became Brisbane’s major police corruption scandal. The three kings—the so-called Rat Pack of detectives including Terry Lewis, Glenn Hallahan and Tony Murphy under the guiding influence of (the aforementioned) Commissioner Frank Bischof—become involved in the alleged suicide of prostitute and brothel madam Shirley Brifman in the early 1970s, which ultimately led to murder, pay-offs, political machinations, drug heists, assisted suicides, police in-fighting, and a complicated system of corruption that ultimately collapsed under its own weight. Condon continues the story of Terry Lewis in Jacks and Jokers (2014) taking the story into the late 1970s with the booming east coast Australian drug trade and police graft (Jacks, by the way, being Aussie slang for cops) to a whole new level. Finally All Fall Down (2015) continues the saga with corrupt cop Terry Lewis becoming police commissioner of the Queensland police in the 1980s and a new era of corruption at the highest levels of the police and government known as ‘The Joke’, a highly organised system of graft payments from illegal gambling, prostitution and illicit drugs.

There’s a link running from The Brisbane Line in World War Two through to Matthew Condon’s books of police corruption in Brisbane. Certainly the city suffered from a corrupt force and went through years of the Fitzgerald Inquiry, officially The Commission of Inquiry into Possible Illegal Activities and Associated Police Misconduct. Those years have lingered on, at least in the imaginations and investigations of Brisbane’s crime writers. 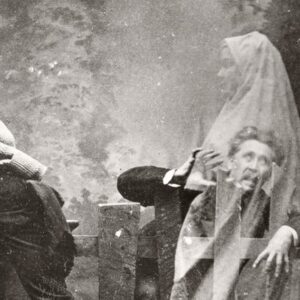 A cold rush of air traveling over your bare skin despite the warmth of the room. Something waking you in the still of the night,...
© LitHub
Back to top