Whether you're a gardener with a green thumb, or someone who simply enjoys reading about nature, these cozies are for you!

I love to garden. I always have. But there came a time when my shoulders wouldn’t let me do the heavy lifting. Planting planters was about as difficult as I could manage without injuring myself. But one day when I was at a Renaissance Faire, I came upon a woman who was selling fairy gardens, and my eyes lit up. Instantly, I became enamored with the art.

I’m not a crafty person—I can sew and bake and color inside the lines—but until now, I had rarely used a glue gun, so designing adorable cards or making jewelry or furniture were out.  However, fairy gardening was right up my alley. There were twinkling lights and pretty plants and the most adorable fairy figurines in each garden.

If you don’t know what a fairy garden is, think of it like doll-housing for the garden. The beauty about fairy gardening is it’s all about the story. Find a pot you like, add some plants—in my Los Angeles home, I’m big on succulents—and then create a story with fairy figurines and environmental pieces like swings, slides, houses, and more. Add a sign to anchor the story if you like, and voila. You have a fairy garden.

Many of my gardens (I’ve become slightly obsessed—I’ve even built a fairy town in the nook outside my office!) have themes about reading and enjoying books. By creating a fairy garden, I believe—as does the protagonist in my Fairy Garden Mystery series—that you invite magic to enter your life.

Anyway, back to the day I went to the fair. When I got home, I immediately went online to search for a fairy garden shop near me. Garden-style brick-and-mortar shops are not that plentiful—there are many places online to purchase items—but what I did find, about ninety minutes from my house, was a delightful garden shop owned by Beverly Turner, who teaches fairy gardening seminars. Her book Fairy Gardening is now one of my go-to resources. I roamed the shop, selected fairy figurines and such, and returned home to fashion my first one.

While I was putting it together, the mystery author in me came alive. I thought what if . . .  What if an honest-to-goodness fairy appeared to a fairy garden storeowner and helped her solve crime? I’m known for my culinary mysteries, but I read paranormal mysteries featuring witches and ghosts. Was there a fairy sleuth among the many choices? I wondered. I couldn’t remember there being one. I did a deep dive and discovered the answer was no. So I created the Fairy Garden Mysteries.

In the Fairy Garden Mysteries, when Courtney Kelly, a former landscaper, spreads her wings and launches her fairy garden store Open Your Imagination, Fiona, a sleuth fairy, appears to her, and the magic begins. Booted out of the fairy kingdom for being an imp, Fiona has to help humans solve problems. Courtney, who lost the ability to see fairies at the age of ten after her mother passed away, is astonished to see a fairy, of course, but she embraces the new magic in her life.  Now if only she could get her stubborn father to see the light.

In A Glimmer of a Clue, the second in the series, when Courtney’s friend Wanda gets into a ponytail-pulling wrestling match in public with a nasty local art critic, Courtney stops the fight with the help of a garden hose. But the art critic has a talent for escalating things and creating tension, which she succeeds in doing by threatening a lawsuit, getting into yet another scuffle—in the midst of an elegant fundraiser, no less—and lobbing insults around like pickleballs. Gee, guess who dies?  At Open Your Imagination, they serve tea in the garden on Saturdays, so there are recipes in each of the books.

If you enjoy gardening or simply reading about the beauty of nature, there are a number of cozy mystery authors who have fun playing with the theme! 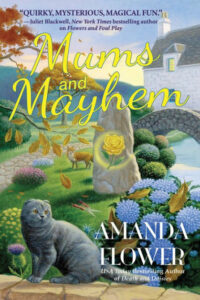 One of my favorite series is by Amanda Flower. How perfect a surname is Flower for an author who writes about gardens? In Mums and Mayhem, the third in the series (I have to share this from the blurb because it’s so clever!), a famous fiddler has been kilt. A magic garden’s left to wilt. Does Fiona Knox’s father hold the guilt? Will florist Fiona’s blood be spilt?  Fiona owns the Climbing Rose Flower Shop in Scotland and the series is truly magical. 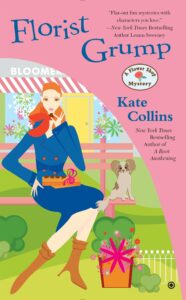 Kate Collins, New York Times bestselling author, a dear friend I met way back when at a writers’ conference, pens a couple of garden mystery series. The Flower Shop Mystery series has been made into a Hallmark TV series. The story features Abby Knight, the proud owner of her hometown flower shop. In Mum’s the Word, the first in the series (there are 19 at last count), a new low-cost competitor is killing Abby’s profits—and a black SUV just rammed her vintage Corvette in a hit-and-run. Abby is determined to track down the driver, but when the trail turns deadly, the next flower arrangement might be for her own funeral. Yipes! I’ve learned all sorts of flower tips by reading this series. 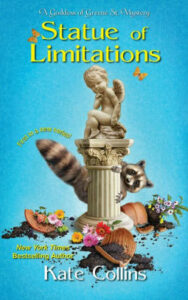 Kate also writes the Goddess of Greene St. Mysteries. In the first book in the series, Statue of Limitations (love the title!), Athena Spencer keeps busy raising a son and a pet raccoon named Oscar—you’ve got to love that she has a pet racoon, right?—in a tourist town on Lake Michigan while working at her family’s garden center. But sometimes, she also has to get the dirt on a murderer. 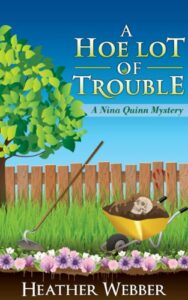 Another dear friend—can you tell I like people who love gardening?—Heather Webber writes the Nina Quinn Mystery series starring a landscaper. Remember that my character Courtney Kelly was a landscaper before she opened her fairy garden shop? I think she and Nina could be good friends! In The Root of All Trouble, Nina’s landscaping firm specializing in surprise garden makeovers is the only thing in her life that seems to be thriving. Her marriage to adulterous police detective Kevin Quinn has wilted. Her antisocial stepson Riley is spreading trouble like pungent manure. Even her gardening tools are disappearing, including a rather valuable set of hoes. Worst of all, the delightful old man who first introduced her to the joys of horticulture is dead—and not by natural causes. Uh-oh. What do you bet Nina has to dig up some dirt? 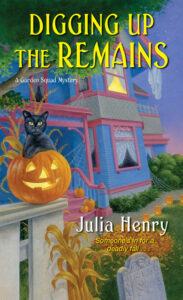 Last but not least, Julia Henry, aka J.A. Hennrikus, another sweet friend I met at a conference in the northeast, writes the Garden Squad Mystery series. Post-retirement aches and pains can’t prevent sixty-five-year-old Lilly Jayne from tending her manicured garden. In Wreathing Havoc, book 4 in the series, there’s nothing like autumn in picturesque Goosebush, Massachusetts, but beneath the season’s sun-dappled foliage, Lilly and her Garden Squad must investigate a shadowy murder mystery after a theater owner’s sudden death sows as much drama behind the scenes as on any stage. (Tidbit: I also love mysteries that involve theater!) 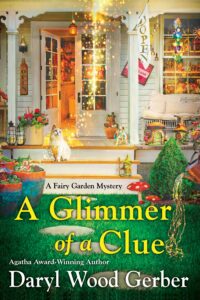 Daryl Wood Gerber is the Agatha Award-winning, nationally bestselling author of the Fairy Garden Mysteries, the French Bistro Mysteries, and the Cookbook Nook Mysteries, as well as the Cheese Shop Mysteries written under the name Avery Aames. She also writes standalone suspense novels and the Aspen Adams Novels of Suspense. Prior to her career as a novelist, she was an actress with roles in television shows including Murder, She Wrote, and she wrote for the popular TV sitcom Out of this World. Originally from the Bay Area, she now lives in Southern California where she likes to cook, garden and spend time with her frisky Goldendoodle named Sparky. Visit her online at DarylWoodGerber.com. 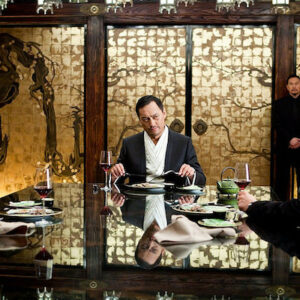 It’s been years since our protagonist gave up his life of crime. He’s gone straight now. He just wants to be left alone...
© LitHub
Back to top