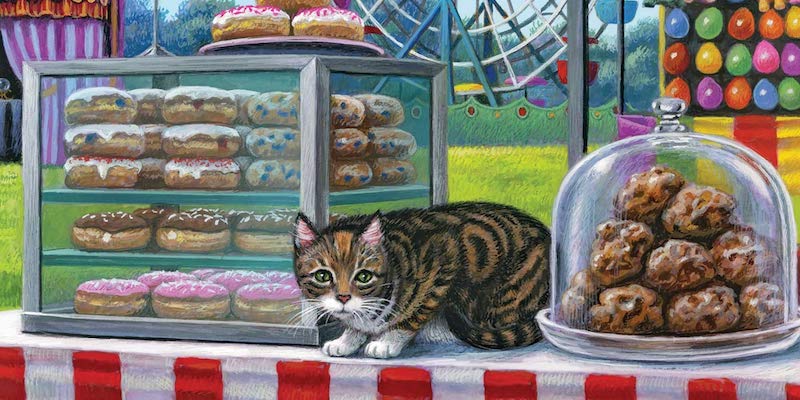 Summer is here! It’s the perfect time for travel, food, fun, and reading. Luckily, with cozy mysteries, we get all of the above, and we don’t have to leave home for it.

The fifth installment of my Deputy Donut Mystery series, Beyond a Reasonable Donut, features a Friday the 13th celebration, the Baker’s Dozen Festival. Attendees can tempt good and bad luck, laugh at pranks and jokes, and receive thirteen goodies when they pay for a dozen. Emily Westhill from Deputy Donut, a café in downtown Fallingbrook, Wisconsin, and her assistant Nina are excited to fry and serve “corny” fritters at the festival. For those craving sweets, the fritters can be dipped in sugar. Naturally, the festival’s bad luck is all fun and games—or is it?

First, Emily and Nina’s bucket of powdered sugar disappears. Then one of the festival’s magicians dashes off with a fistful of bills from their cash drawer. Worst of all, the mime who helped the magician ends up in Nina’s apartment with her head in the bucket of missing sugar. Long-lost clues to secrets in Nina’s past incriminate Nina in the woman’s death. If Nina is to fulfill her dreams of attending her first solo show at a prestigious art gallery, Emily will have to follow a sprinkling of not-so-sweet clues to uncover the real murderer.

Hmmmm. Whipping up goodies seems to help some cozy sleuths solve crimes. If we nibble on sugary treats while we read cozies, will we be able solve the mysteries as quickly as cozy sleuths do? Let’s test this theory! Stock up on goodies, stretch out, open the books, enjoy summer events in cozy villages, and become an armchair detective. Complete with (ahem) donuts. 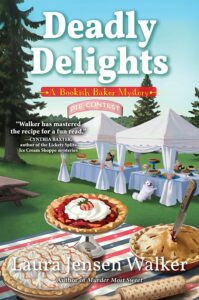 Another event being held in Wisconsin this August is a pie-baking competition in Lake Potawatomi. Teddie St. John, a breast cancer survivor, baker, and mystery author enters the contest only to be suspected of murdering the judge whose face landed in Teddie’s neighbor’s lemon meringue pie. Dents in the deceased’s head resemble the pattern on Teddie’s one-of-a-kind embossed rolling pin. Teddie knows that many other Lake Potawatomi citizens might have wanted to see the last of the lecherous judge, so it’s up to Teddie, her ever-inventive friends, and her dog Gracie to ignore Teddie’s mother’s “helpful” suggestions, sift through clues, and find the person who transformed the judge from bedroom-eyed to pie-eyed.

Sweet treat suggestion: While reading Deadly Delights, you might not (for once) find yourself hungry for lemon meringue pie. How about a hand pie? After all, they can, like donuts, be deep-fried. . . 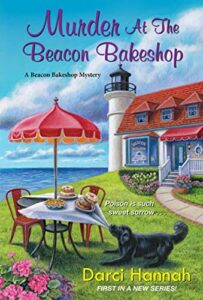 Murder at the Beacon Bakeshop by Darci Hannah

Despite local lighthouse preservationist protesters, Lindsey is ready on time for her grand opening. Crowds arrive to sample the bakeshop’s mouthwatering treats. With all hands on deck, Rory generously acts as barista.

Unfortunately, in addition to the protesters, Lindsey’s ex-fiancé arrives with the woman who caused his swift transformation to ex. The new girlfriend and a protester start a food fight. After shouting that Lindsey’s Hog Heaven donuts are terrible, the new girlfriend collapses. With her livelihood and perhaps her life in danger, Lindsey and her friends must figure out who poisoned Lindsey’s ex’s girlfriend.

Sweet treat suggestion: Lindsey’s Hog Heaven donuts are slathered in maple frosting and studded with bits of bacon. You might brave eating one or two (or five) while reading Murder at the Beacon Bakeshop. The important thing is to have many delectable treats on hand. You’ll need them. 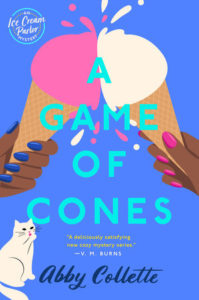 A Game of Cones by Abby Collette

Bronwyn (Win) Crewse manages her family’s ice cream shop, Crewse Creamery in Chagrin Falls, Ohio. She creates frozen delights like mint mojito coffee ice cream and mango sorbet. Everything is sweet until a developer reveals plans to replace some of Chagrin Falls’ most picturesque shops with a mall. And then the developer’s representative ends up dead behind one of those picturesque shops.

Rory, a friend from New York, arrives to tempt Win back to the city. Questions arise about Rory’s whereabouts at the time of the murder. And why are some of the village’s shopkeepers holding a non-fire fire sale and not including other shopkeepers?  Win and her two best friends had solved a previous murder. Win refuses to become involved this time. But can she?

Sweet treat suggestion: I can’t resist ice cream while reading this book, but I want to put a deep-fried twist on it. Not deep-fried ice cream. This will be simpler. Before you open the book, buy (or make!) donuts and ice cream. Go wild choosing the amounts and flavors. Slice the donuts in half, place ice cream between the two halves (experiment with different types of donuts for the two halves if you like,) wrap tightly, and freeze for at least an hour. Instant (almost) donut ice cream sandwiches! You’re welcome. 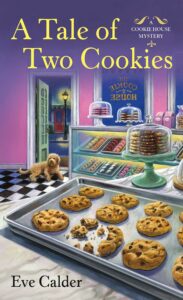 Finally, we travel to Coral Cay, a Florida island where Kate McGuire bakes cookies at The Cookie House, and life is easy, with beaches, warm waves, and seashells. And then Kate’s friend Desiree arrives with her fiancé and an idea for a sudden beach wedding. Kate is happy to join the planning and baking. She’s sure that nothing can mar the couple’s happiness. It is the best of times.

It quickly becomes the worst of times when the groom misses the wedding. Desiree is distraught. Does the groom’s disappearance have anything to do with the arrival of a reality TV film crew and their shenanigans on the once-idyllic island? Certain that the groom did not have cold feet, Kate wades in to find him and prove that the police are wrong. Will she get in over her head?

Sweet treat suggestion: Reading this book will require more than two cookies and a donut or two. How about cookie-themed donuts, like Toll House donuts, peanut butter donuts, or gingersnap donuts? And does anyone have some spare wedding cake? 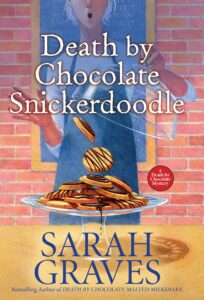 Next, we visit Eastport, Maine, where Jacobia (Jake) Tiptree and Ellie White run the Chocolate Moose bakery. While the two ladies are planning what to enter in the village’s cookie baking contest, Jake’s son’s employee Billy discovers the body of the town’s number-one most-hated con man. Police suspect Billy, but Jake and Ellie are certain that many other people in the village would have liked to be rid of the swindler. Billy has custody of his two teenaged sisters. They beg Jake and Ellie to prove that Billy is innocent, the only thing that can prevent the girls from being forced to live under the thumb of a too-stern great aunt. Jake and Ellie pull themselves and each other into snicker-inducing scrapes, and they also manage to land in a fire without jumping out of a frying pan first. Despite the setbacks, can they exonerate Billy?

Sweet treat suggestion: While you’ll want some snickerdoodles drizzled with chocolate, you might also try your hand at making chocolate mousse—filled snickerdoodle donuts. 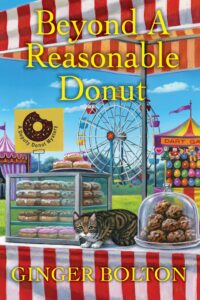 Ginger Bolton is the pseudonym of an Agatha-nominated cozy mystery author. She is the author of the Deputy Donut Mystery series and is very fond of donuts, coffee, and coffee shops that encourage patrons to linger and chat. Ginger lives in a rural area surrounded by cozy villages. When she isn't reading, writing, or daydreaming while gazing out windows, she walks her dogs, plays an electric piano (she uses earphones so as not to frighten the wildlife), creates minor disasters in her kitchen, and occasionally takes part in local amateur theater productions, which, intended or not, become comedies. Visit her online at GingerBolton.com. 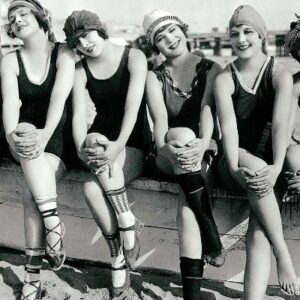 Fill up your beach bag with Kristen and Layne's summer reading recommendations, featuring shotgun-toting housewives, stabby...
© LitHub
Back to top