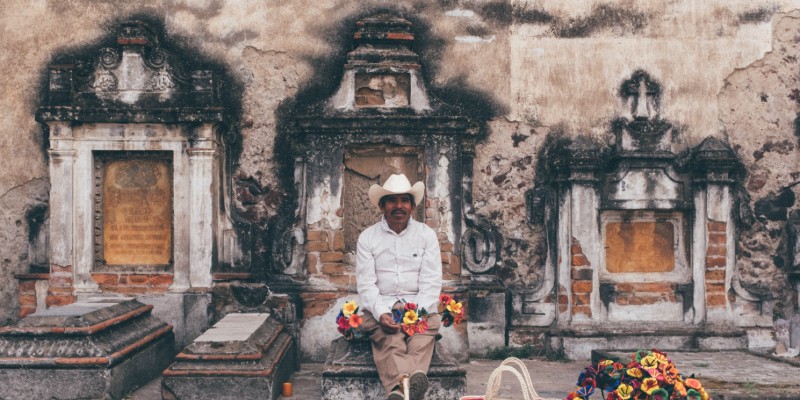 The new noir moves between borders, languages, and cultures.

There are plenty of videos on YouTube showing ghostly apparitions, strange creatures caught on tape, and freak accidents. However, the only video on the site that has given me goosebumps is one of a man on a stage holding a microphone and quietly reading a note. The man is Chalino Sánchez, a famous narcocorrido singer. The note he’s reading in the video is a death threat. In the first twenty seconds of the clip, Sánchez, decked out in a cowboy hat and tan suit, is shown reading the piece of paper, wiping away a tear, and carrying on with his show while looking out at the audience, perhaps wondering if the face of his killer is part of the crowd. He would be alive only for a few more hours.

As with every other cartel killing, the details of Sánchez’s execution will never be clear. What we do know is that Sánchez, who made a lot of money singing at private parties for the cartels and writing narcocorridos that glorified violence and drug trafficking, got into trouble with Gonzalo “Chalo” Araujo, a leader among the Sinaloa Cartel sicarios. In fact, at a new year party the previous year, Sánchez reportedly shot an AK-47 at the air while screaming Araujo’s name. Then, on May 16, 1992, Chalino was being transported in a Chevy Suburban through the streets of Culiacán, Mexico after the concert during which he received the death threat. Twenty minutes into the drive, a Federal Police vehicle stopped Chalino’s car near an abandoned lot. The Federales forced Sánchez to the side of the road. At approximately 6:00 a.m. in the morning, Sánchez’s body was found on the side of a road with two gunshot wounds to the back of the head.

Sánchez’s execution perfectly embodies the secrecy, extreme violence, and unflinching brutality of cartel life and shows the aesthetic adopted by Latin crime narratives in the last few years. The murder also reflects the world Chalino sang about. Here is the ending of “Rosalino Sanchez,” a corrido he wrote about himself:

He knows a lot about trafficking, that’s been demonstrated
He knows all the tricks, and he has also cleared
Every single border, his trafficking has passed
Through Texas and Tamaulipas, his name is already mentioned

He lives in the United States, if anyone wants to find him
Look for him to be his friend, never to harm him
And protect yourself from his gun, because he’s very good at shootin’

From the drugs and bloodshed of the Mexican border, which Chalino sang about, to the murders and mayhem of Pablo Escobar’s reign, real crimes in South and Central America helped fuel a particular kind of crime fiction that echoes its real-life counterpart. Furthermore, the exploits of drug figures like Escobar, Griselda Blanco, Joaquin “El Chapo” Guzman, the Beltran Leyva brothers, and Carlos Lehder, to name a few, have inspired countless miniseries, movies, documentaries, and telenovelas, which have further increased the market for Latin crime and noir and have helped it become part of mainstream entertainment.

American readers have always loved crime. The genre’s history follows a strange path that runs parallel to whatever reality the country is experiencing in terms of crime. I consider Westerns the start of it. They had clearly defined bad guys, lots of guns, and people robbing banks, shooting each other, and sticking up trains. James Butler, “Wild Bill” Hickok, Billy “The Kid,” Jesse James, Butch Cassidy, Harry “Sundance Kid,” and other outlaws shaped not only the American Southwest with their deeds but also helped influenced the early stages of American storytelling and the way we looked at crime in and out of fiction. Bad men, and women, on horseback with a gun in each hand sold a lot of books.

From there you can jump to New York City and New Orleans in the 1920’s. According to the FBI’s history of La Cosa Nostra, Giuseppe Esposito was “the first known Sicilian Mafia member to emigrate to the U.S.” He fled to New York with six other Sicilians after murdering the chancellor and a vice chancellor of a Sicilian province as well as 11 wealthy landowners. In the following decades Mafiosi kept coming into the country and established themselves, almost always continuing their life of crime. By the end of the 1930s Lucky Luciano was already a household name. He had set up the “Commission” to rule all La Cosa Nostra activities and the seven families that made it up controlled almost all illegal activities in the country. Between then and today, mafia members have made front pages and inspired many nonfiction books, novels, and movies. Even today, the five main New York City Mafia families, known as the Five Families: the Gambino, Lucchese, Genovese, Bonanno, and Colombo families, are still talked and written about thanks to the way they used brutality to organize crime in America in ways that had never been seen before.

While La Cosa Nostra was writing the book on everything from gambling and prostitution to massacres and protection rackets in The Bronx, Brooklyn, Manhattan, Queens, and Staten Island, the country’s political climate, love for guns, and blossoming darkness thanks to the first cracks in the American Dream coalesced into something ugly and dangerous in Los Angeles. Spies, desperate housewives, senseless murder, and mobsters gave birth to hardboiled private investigators and they carried crime fiction all the way to the present era on the shoulders of writers like Raymond Chandler, Dorothy B. Hughes, and Ross Macdonald.

The history of crime fiction in the United States obviously doesn’t end there. Many authors still work in the sandbox created by the forefathers of noir. James Ellroy, for example, is a master in that sandbox. However, others have moved away from that to tackle contemporary issues, and that has often meant adding some Latin flavor to their work. For example, the work of crime maestro Don Winslow focuses on the border. And it doesn’t end there. Gangs are a dangerous reality in most big cities. Bloods, Crips, Aryan Brotherhood, Black Guerilla Family, Hell’s Angels, Devil’s Disciples, and many others have a huge presence in many cities and have taken over drug trafficking and other criminal activities in and out of the U.S. prison system. It comes as no surprised that they regularly show up in crime narratives.

This is what’s happening in the streets now, and thus it is where gritty crime fiction gravitates to.

Gangs are the perfect element to illustrate how the Latin influence came to be because the gang problem in the U.S. has a strong Latin presence and some of the most notorious gangs are from places south of the border. The Mara Salvatrucha is always on the news, but plenty of gangs like the Surenos, Latin Kings, Vatos Locos, Nuestra Familia, the Mexican Mafia, Barrio Azteca, and the Sinaloa, Juarez, Los Zetas, and Tijuana cartels add a level of viciousness and violence to the mix that’s rarely seen in gangs from this side of the border. This is what’s happening in the streets now, and thus it is where gritty crime fiction gravitates to.

Crime writers, and by default crime readers, are drawn to the genre because it has always been infused with a sense of otherness. Crime is the literature of outsiders. It usually deals with things that happen in dark corners and depicts the actions of people who do unspeakable things. Shooting men and robbing banks made for titillating novels and crazy headlines. Mafia hits made front covers, scared entire cities, and brought about classic novels like Mario Puzo’s The Godfather and Lorenzo Carcaterra’s Gangster while helping usher in decades of great Mafia movies. The crime genre flourished thanks to the outlaws and La Cosa Nostra because readers wanted more of those worlds. Now the same is happening with Latin-inspired crime narratives. The difference is that the level of brutality Latin crime delivers is unreal in this day and age, and that makes it irresistible. Furthermore, the United States is the second largest Spanish speaking country in the world and has a constant influx of people from all over Latin America and the Caribbean, which translates into many writers who understand the language and the culture of these places bringing narratives of otherness, immigration, poverty, and crime to the page with authenticity and heart. La Cosa Nostra was always tied to certain cities even if they were widespread and legendary outlaws were mostly in the South. In the case of Latin crime, however, it can be found wherever you can find Latinos, and that happens to be almost everywhere. If the Mafia had New York, Latin crime can claim New York, Boston, Chicago, Florida, Texas, California…you get the point; it’s everywhere.

We live in a country full of gun violence and gangs. However, people aren’t hung from bridges. Yes, bodies are found regularly across the country, but we have no stories of dozens of mutilated corpses showing up on the streets, men dissolving bodies for the cartels, multiple murders every weekend, or houses with walls packed with dead men. Those things belong to another world. Those are things you find in Mexico, Honduras, and Puerto Rico, and Latin crime novels bring that to readers who live far from it but who are attracted to stories where crime seems to push against its own boundaries and create a third space, a genre so brutal and raw it inhabits the interstitial space between crime/mystery/noir and horror fiction.

There are plenty of reasons why crime is, generally speaking, more brutal in Latin culture. Chief among them are deplorable living conditions rooted in poverty that lead people with low socioeconomic status to turn to crime as the only way to survive. Tied for first place with poverty is the existence of corrupt governments that make extreme, relentless crime possible. Likewise, the authorities in some of these countries are rotten to the core, and that facilitates the proliferation of crime.

The American Dream has some infected wounds, and Latin crime fiction is the blood coming from those wounds.

Those two main reasons stay behind once we cross the US-Mexico border, but that doesn’t mean the violence stops or that the activities of the cartels and mareros cease. Instead, they adapt. They find a country that’s more racist and more divided than ever, and they feed on that. Latin crime fiction produced in this country is exploring that adaptation process and digging into the spaces where being from somewhere else pushes people into uncomfortable situations and desperate actions. The American Dream has some infected wounds, and Latin crime fiction is the blood coming from those wounds.

Bilingual crime writers bring the flavor of their culture to the page and deliver authentic narratives that live between borders and between languages. This makes their work unique and exciting. This is a thrilling development and follows the path of otherness and crime fiction set by the genre’s predecessors. As the country becomes more diverse than ever, the stories of Mexican, Argentinian, Colombian, Honduran, Puerto Rican, Cuban, Dominican, and Peruvian crime, to name but a few, will continue to grow and morph into something uniquely American. This is great news for the genre, and even better news for readers. Latin crime fiction is the genre’s new wave. Go ride it.

Gabino Iglesias is a writer, editor, translator, and book reviewer living in Austin, TX. His fiction has appeared in the New York Times, NPR, the Los Angeles Times, the Los Angeles Review of Books, Electric Literature, Vol. 1 Brooklyn, Criminal Element, The Brooklyn Rail, Heavy Feather Review, PANK Magazine, The Collagist, and many other print and online venues. He is the book reviews editor for PANK Magazine, the TV/film editor at Entropy Magazine, and a columnist for LitReactor and CLASH Media. You can find him on Twitter at @Gabino_Iglesias. 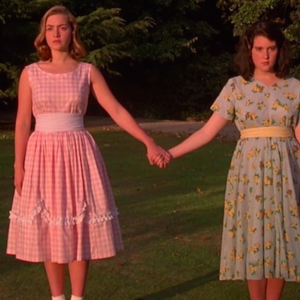 Twenty-five years ago this November, the release of Heavenly Creatures hit theaters, bringing to life an infamous murder...
© LitHub
Back to top