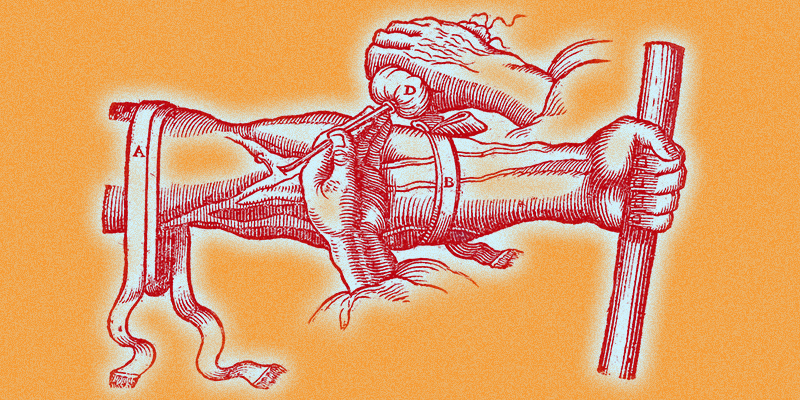 Historical fiction writer Robert Lloyd on a series of bizarre and bloody experiments in Restoration England.

The Bloodless Boy begins with a gruesome discovery: a dead boy entirely drained of his blood. (The title is apt.) A Justice of Peace seeks help from the Curator of the Royal Society, Robert Hooke, who brings with him his assistant, Harry Hunt.

From various signs on the body, the two ‘natural philosophers’ quickly establish that the boy’s blood was partly removed at various times, then all of it was taken. With their experience of blood transfusion, the pair conclude that someone has subjected the boy to a series of grisly experiments.

As thrillers do, this initial finding leads to a greater mystery. Set during the Popish Plot—when anti-Catholic hysteria was fanned by fabricated ‘evidence’ from Titus Oates and his associate Israel Tonge—the story drags Harry and Hooke into an intrigue dating from the English Civil Wars.

So, is my tale of 17th century blood transfusion fanciful, or is it based on fact? Let me explain about some experiments Hooke and Harry knew of in their work with the Royal Society.

Utilising blood to either enhance the performance of a healthy body or heal a sick one goes back far longer than the Restoration setting of The Bloodless Boy. Blood sacrifice, blood brothers, ancient Egyptian blood baths, Romans drinking the blood of gladiators; all are well known and documented. Blood is symbolically powerful: in the Bible; in the notion of transubstantiation; in the Jewish blood libel. Faust and Mephistopheles sign their pact in blood, since nothing else would do. Countess Elizabeth Báthory de Ecsed is said to have bathed in the blood of her victims, although how true this is, and how many victims there were, is up for debate.

Ovid’s Metamophoses tells us of Medea preparing ‘a brew’ to cure the ailing Aeson. She cut his throat, let all his blood run out, and refilled his veins with the brew. His grey hair returned to black, his wrinkles disappeared, and the strength of youth was restored to his limbs. (Give me some of that.) In 1492, Pope Innocent VIII, suffering after a stroke, drank the blood of three boys—who were bled to death for the purpose—to revive him. The treatment was unsuccessful.

Pythagorean physiology posited four basic ‘humours’ of the blood; to maintain health these had to be kept in balance. Bloodletting, and cooling or warming the blood by herbs, was thought to be therapeutic.

In the early 1600s, Johannes Colle at Padua, Magnus Pegel in Germany, and Libavius of Halle all wrote of transfusion from one body to another, and how this may be set about. But it was not until William Harvey described the circulation of blood, in his Exercitatio Anatomica de Motu Cordis et Sanguinis in Animalibus of 1628, that we find practical—and to a degree, successful—attempts at blood transfusion.

In 1649, as John Aubrey tells us in his Brief Lives, Francis Potter attempted to transfuse blood between chickens, Aubrey lending him a lancet to do so. But Potter failed, although he ‘tried diverse times’, unable to ‘strike the veine so as to make him bleed in any considerable quantity.’

By this Operation divers Creatures were immediately purg’d, vomited, intoxicated, kill’d, or reviv’d according to the quality of the Liquor injected: Hence arose many new Experiments, and chiefly that of Transfusing Blood, which the Society has prosecuted in sundry Instances, that will probably end in extraordinary Success.

Wren didn’t carry out these experiments himself. They were performed by an assistant, Richard Lower, who had worked at Oxford under Thomas Willis, famous for his dissections of brains. Lower also worked for Robert Boyle, who, too, was eager to trial transfusion. In his Memoirs for the Natural History of Human Blood Boyle queries ‘whether by transfusion of blood, the disposition of individual animals of the same kind, may not be much altered.’ He wonders ‘Whether a fierce dog, by being quite new stocked with the blood of a cowardly dog, might not become more tame.’ Also, ‘Whether a transfused dog will recognize his master?’ More pertinently for the plot of The Bloodless Boy, ‘Whether rejuvenation will occur if an old, feeble dog is given the blood of a young, vigorous one?’

Other experiments injected poisons and drugs such as opium into animals—a process known to the Royal Society’s Fellows as ‘infusion’—to observe how circulation carried them around the creature’s body. (Wren is credited with the invention of the syringe from this time.)

Working in Oxford, Lower carried out the first known successful blood transfusion from one animal into another, in February 1665. The process involved ligatures, running knots, sticks, and quills.

The first successful transfusion at Gresham College, the Royal Society’s meeting place, is described in Thomas Birch’s History of the Royal Society. Dr Edmund King and Thomas Cox used a ‘little mastiff and a spaniel with very good success, the former bleeding to death, and the latter receiving the blood of the other, and emitting so much of his own, as to make him capable of receiving the other.’ As his diary entry of 14th November 1666 tells us, Samuel Pepys, a keen Fellow and later President of the Royal Society, enjoyed ‘an exceeding pretty supper’ at the Pope’s Head, where Dr. William Croone, an original Fellow, told him of the same ‘pretty experiment’:

This did give occasion to many pretty wishes, as of the blood of a Quaker to be let into an Archbishop, and such like; but, as Dr. Croone says, may, if it takes, be of mighty use to man’s health, for the amending of bad blood by borrowing from a better body.

Pretty indeed. Philosophical Transactions, the Society’s publication detailing its various meetings and experiments, tells us that blood was transfused between ‘a young Land-Spaniel’ and ‘an old Mungrell Cur, all overrun with the Mainge.’ However, in this experiment the young, fit dog received the old dog’s blood. The fit dog remained fit, and, strangely, so too became the old dog, which was ‘in about 10 dayes or a fortnight’s space perfectly cured.’

More spectacularly, the following year saw the first animal blood transfusion into a human, performed in Paris by King Louis XIV’s physician Dr Jean-Baptiste Denys. A 15-year-old boy received a sheep’s blood, and the boy survived the transfusion. Denys performed another transfusion into a labourer, who also survived. (These happy outcomes were probably because of the small amounts of blood transfused.) In the same year, he performed two transfusions on Antoine Mauroy, a man suffering from ‘an inveterate phrensy, occasioned by a disgrace he had received in some Amours.’ Using a calf’s blood this time, Denys hoped that the ‘mildness and freshness’ of the calf’s blood might allay the ‘heat and ebullition’ of Mauroy’s. After the treatment Mauroy ‘made a great glass full of Urine, of a colour as black, as if it had been mixed with the soot of Chimneys.’

Anxious not to be left behind by the French, the Royal Society approached Dr Thomas Allen, Bethlehem Hospital’s physician, but he refused to allow it to infuse any of his patients. Instead, Lower and Dr King ‘superintended the introduction’ of sheep’s blood into a man named Arthur Coga, ‘and without any inconvenience to him.’ Apparently needing the payment (a whole guinea), Coga later wrote about his experience, saying that lamb’s blood was chosen for its ‘symbolic power, like the blood of Christ, as Christ is the lamb of God.’

Presumably with the promise of another guinea, they repeated the experiment. Coga reported feeling ‘somewhat feverish.’ No third experiment happened, which may be explained by a letter Coga wrote to the Royal Society the next year, describing himself in the third person as ‘Your Creature (for he was his own man till your Experiment transform’d him into another species)’. He seems to have fallen on ill-luck and indigence, describing himself as a ‘shipwrack’t vessel’, and he blamed the Royal Society for it. He signed his letter ‘The meanest of your Flock.’

Back in Paris, a third transfusion carried out by Denys on Antoine Mauroy was soon followed by Mauroy’s death—although at the ensuing trial Denys was found innocent of wrongdoing. Madame Mauroy was tried instead for poisoning her husband. The French Supreme Court forbade blood transfusions until the Faculté de Paris gave its approval. As permission was never given, Denis turned his attention to staunching wounds instead, inventing a liquid to do so, whose ingredients were a closely guarded secret.

Although no such calamity occurred in London, Viscount Brouncker, the President of the Royal Society, put a stop to more experiments. Worried by the news from France, he was worried further that compensation might need to be paid to any victim of transfusion, which the Society could ill-afford.

The ‘extraordinary success’ predicted by Sprat was not to be achieved until a much later age. 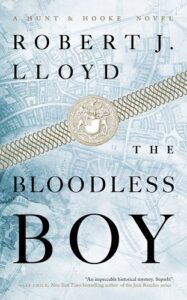 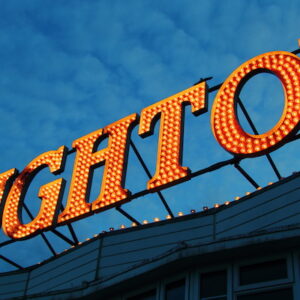 Writing Assassin's Lullaby, a high-octane story of a former Mossad operative who has become a highly skilled contract killer...
© LitHub
Back to top