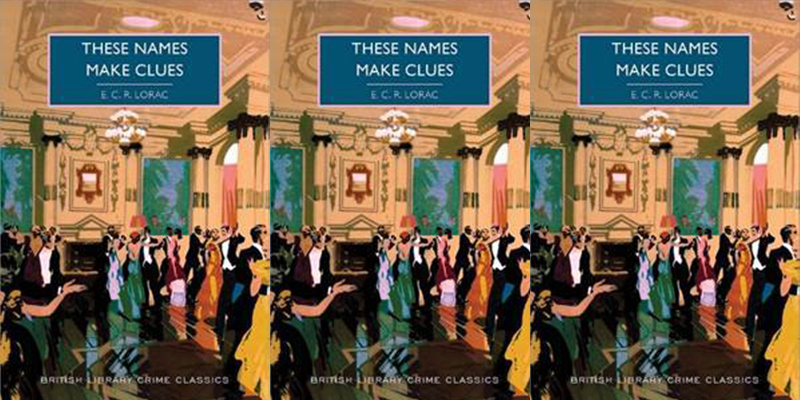 A traditional "closed circle" mystery, Lorac's novel is her best at capturing the spirit of the Golden Age.

These Names Make Clues is an intriguing detective novel written at a time when its author was establishing herself as one of the leading exponents of the genre. The book was first published in 1937, under the prestigious Collins Crime Club imprint. Remarkably, however, this is one of E. C. R. Lorac’s novels that has been almost forgotten. At the time of writing this introduction, I cannot trace a single copy for sale on the internet—anywhere in the world. Nor have I been able to discover any critical commentary about the novel in reference books. Quite a mystery.

This neglect is all the more surprising given that, of all the Lorac books I have read, These Names Make Clues is the novel most closely in tune with the mood of traditional detective fiction of the kind we associate with the Golden Age of Murder between the two world wars.

That mood is struck right from the start. It’s April 1936, and we encounter Chief Inspector Macdonald at home. He’s about to read a popular travel book by Peter Fleming (whose younger brother Ian was at that time unknown; this was long before he created James Bond), but first he goes through his correspondence.

Amongst his letters is an invitation from Graham Coombe, a publisher, and his sister Susan. They invite Macdonald to “join in a Treasure Hunt. Clues of a Literary, Historical and Practical nature will be provided. It is hoped that detectives, both literary, psychological and practical, will compete in their elucidation.” In an accompanying letter, Coombe challenges Macdonald to forget his professional dignity and “measure your wits against those of the thriller writers, and others, who are competing.”

This is the sort of set-up that is more commonly associated with writers like Agatha Christie; one thinks, for instance, of Cards on the Table (in which Hercule Poirot is invited to a bridge party in the company of murderers who have escaped detection), first published in November 1936. As the seasoned reader of detective fiction knows, such a scenario inevitably leads to fatal consequences.

Macdonald debates with his friend, the journalist Peter Vernon, whether to accept the invitation, and after tossing a coin, he decides to do so. Once he arrives at the Coombes’ party, the complications come thick and fast. The host has invited people to adopt pseudonyms, and one of the first challenges for the Scotland Yard man is to work out the real identities of his fellow guests. The clues in the treasure hunt are equally convoluted. Suddenly the lights go out. Candles are lit, but matters take an even darker turn after it becomes clear that a man calling himself Samuel Pepys is missing. Macdonald and Coombe go in search, only to discover his corpse in a small telephone-room at the back of the house.

The dead man is actually Andrew Gardien, “author of a dozen detective stories. The ‘Master Mechanic’ the reviewers called him, owing to his ingenuity in inventing methods of killing based on simple mechanical contraptions… Springs and levers and pulleys had been used with wonderful effect by the quick brain which had once animated that still body.” But how exactly did he meet his end—and was he the victim of murder, or did he die of natural causes? Before long, another death is discovered and this time there seems to be no doubt that the victim was murdered. Yet in a Golden Age detective novel, things are seldom as they seem.

These Names Make Clues is an example of the traditional “closed circle” mystery, with a limited group of suspects, as with Bats in the Belfry, which Lorac published earlier the same year, and which has been reprinted as a British Library Crime Classic. For those tempted to indulge in a little literary detection, it seems highly significant that 1937 was also the year in which E. C. R. Lorac was elected to membership of the Detection Club.

The Detection Club was the world’s first social network for detective novelists. Founded in 1930 by Anthony Berkeley, the club adopted a constitution and formal rules a couple of years later, by which time it had already made a significant impression on the literary world, broadcasting two radio serial mysteries, and publishing two highly successful collaborative detective novels, The Floating Admiral and Ask a Policeman, which remain in print to this day. The first President was G.K. Chesterton; after his death in 1936, he was succeeded by E. C. Bentley, author of Trent’s Last Case, the novel which was the catalyst for the Golden Age style of cerebral whodunit. Leading figures in the club included Dorothy L. Sayers, Father Ronald Knox, John Rhode, Agatha Christie, Milward Kennedy, and Baroness Orczy. The aim of the club was primarily social, but members were also keen to elevate the literary standards of the genre. Election to membership was— and remains to this day—highly prized.

Lorac was elected the year after the club elected its first American member, John Dickson Carr. In the same year, she was joined by Christopher Bush, Newton Gayle (a pen-name for Maurice Guinness and Muna Lee), and Nicholas Blake (the name under which Cecil Day-Lewis, who later became Poet Laureate, wrote detective fiction). No more members were elected until 1946, by which time the world had changed. Lorac continued to be a proud and enthusiastic member of the Detection Club to the end of her life, travelling down to London after the war from her home in Lunesdale to attend meetings. For a number of years, she served as secretary of the club.

It seems highly likely that These Names Make Clues drew inspiration from her experiences and encounters on becoming a member of the Detection Club. Andrew Gardien bears a resemblance, both in physical appearance and the type of mysteries he wrote, to John Rhode (Cecil John Street in real life), who was a pillar of the club and evidently very good company. Suffice to say that Gardien’s personality and behaviour were different from Rhode’s, and I imagine that both he and Lorac were highly amused by the liberties she took with the character. It would not be a surprise if it were discovered that Rhode, who was generous with his expertise, gave Lorac the idea for the murder method in this story. It is possible to detect touches of other club members, such as Baroness Orczy and the husband and wife team of G. D. H. and Margaret Cole, in the characters. There may also be a hint of Billy Collins, Lorac’s publisher, in the portrayal of Coombe.

Pseudonyms and games with names play a significant part in this story, and in fact E. C. R. Lorac was itself a pseudonym. It concealed the identity of Edith Caroline Rivett (1894– 1958), who also wrote a lengthy mystery series under the name Carol Carnac. She was known to her friends as Carol, and when she started writing crime fiction she simply turned that name back to front so as to become Lorac.

Detection Club members prized “fair play” in their detective fiction, and Lorac’s reluctance to present certain vital information necessary to enable the reader to solve the puzzle until rather late in the book may have raised a few eyebrows among her colleagues. Nevertheless, this is an entertaining story which has been out of print for far too long. The British Library reprints of Lorac’s novels have led to a huge resurgence in her popularity, and it is a pleasure to rescue this book from the obscurity in which it has languished for more than eighty years. 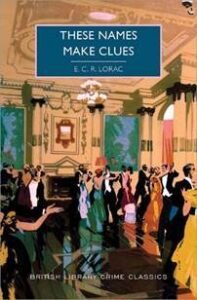 Introduction © 2021, 2022 by Martin Edwards. These Names Make Clues © 1937 by The Estate of Edith Caroline Rivett. Cover and internal design © 2022 by Sourcebooks. All rights reserved. 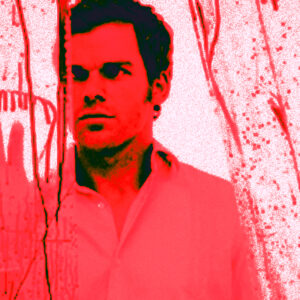 Thrillers, those beloved and highly consumable escapist pleasures, are often mistaken for immoral fluff. I’d like to suggest...
© LitHub
Back to top