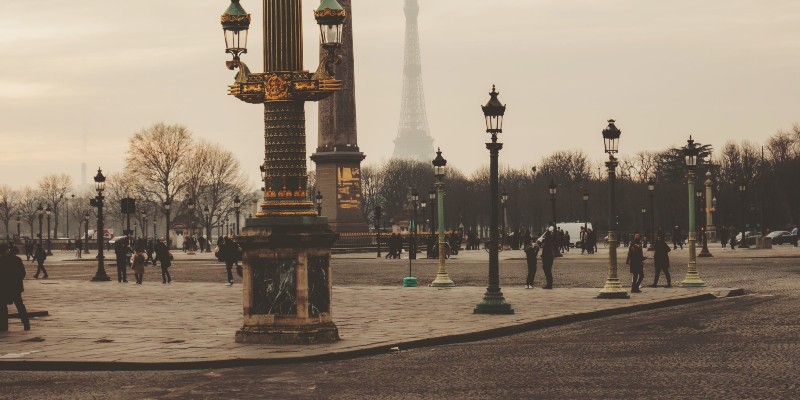 Daniel Levin was invited to dinner in Paris. He was told a man's life hung in the balance. Did he still know people in Syria?

“In your message you indicated that there is something important you would like to discuss with me. So here I am.”

I had received an email from Huby a few days earlier, asking me to meet him in Paris on a life and death matter. Huby had never exhibited any melodramatic tendencies in the past, so I was both worried and intrigued. 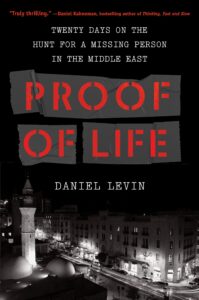 “Indeed,” Huby said with a solemn look, “more than just important. A man’s life hangs in the balance. But first, let’s enjoy a delicious dinner. This place has the best fish in town, and I’ve ordered us both the loup de mer. I hope you don’t mind.”

“Not at all, thanks,” I replied, surprised that this life and death matter could wait until we had finished our meal and also a little annoyed at having someone else decide what I should eat. I got over my annoyance once I realized that Huby had also taken the liberty of preordering a Macallan, neat, which the waiter placed before me with a knowing smile.

“Once you hear what I am about to tell you, you’ll probably think of our dinner as the Last Supper,” Huby said, displaying his penchant for religious references.

“Then why wait?” I asked. “If a man’s life hangs in the balance, as you put it, let’s get on with it. There is no one within earshot. Tell me what’s on your mind. What’s going on?”

Huby gave me an odd look and lifted his glass of Macallan, motioning for me to do the same. “Let’s drink to life,” he said with a sudden expression of sadness.

We sat in silence for a few minutes sipping our whiskeys until the waiter brought the fish to the table and presented it proudly on a silver platter. Huby nodded approvingly.

“Come on, Huby,” I insisted as soon as the waiter had disappeared with the fish. “What is it you want to discuss with me?”

“I suggest we enjoy this delightful dinner now, live in the moment. We can go for a long stroll afterward, and I’ll fill you in on all the gory details.” For the rest of the meal, Huby chatted about politics, then moved to one of his favorite topics, the deeper messages and meanings hidden in Michelangelo’s paintings on the ceiling of the Sistine Chapel. But I was not interested in Huby’s musings about Renaissance symbolism and Freemasons. When we finished our meal, Huby ordered us each a cognac. From past experience I knew that for Huby there was no such thing as just one cognac; it would be a while before we left for our walk.

“Tell me, Daniel,” Huby said after the waiter served our drinks, “are you still engaged in the Syrian conflict?”

I hadn’t seen that one coming. My surprise must have been apparent, because Huby immediately added, “Don’t worry, I don’t really know what exactly you are doing there. When we first met a couple of years ago, you told me a little bit about your political development work in the Gulf and some other initiatives in the Middle East. I asked Jacques what you have been up to these days, but you know our discreet friend Jacques—silent as the grave, so I haven’t been able to squeeze any information out of him. But I did hear that you’ve recently been busy in the Middle East—you know, Lebanon, Jordan, Syria.”

If his clarification had been intended to reassure me, it had the opposite effect. I had never told Huby about my work with a European foundation and select individuals in Syria—code-named Project Bistar— toward a negotiated settlement and our efforts to identify and prepare young, promising Syrians for future leadership roles in a postwar Syria.* Sadly, despite the Syrian regime’s initial eagerness and support, the rulers’ fear of defection ended up far outweighing their desire for national reconciliation and rebuilding, and once we learned that underhanded measures were being taken to prevent this group of future leaders from leaving and participating in our initiative, our foundation had no choice but to end it in late 2013—or risk ridicule and contempt for our gullibility and our willingness to take part in what had amounted to nothing more than a public relations stunt by President Assad and his allies. I was now trying to concentrate on different matters in other parts of the world in the hope that my disappointment in this failed initiative would fade away. Huby’s mention of Syria brought it all back with a bang.

“What do you mean?” My throat tightened.

“Well, a friend of mine close to Number One mentioned that you were well connected in that rather nasty part of the world,” Huby answered with a smirk.

“Your friend just happened to mention this?” I asked, too irritated to inquire about which friend and which Number One he was referring to. Since this was Huby, it could have been anyone in Washington, London, Paris, Riyadh, or any other capital city. Over the past two years, I had witnessed Huby’s immediate access to the inner sanctum of several global leaders. He was their trusted and discreet adviser, especially when it came to procuring petroleum resources, and had played a major role in securing long-term supplies of Niger-originated uranium for France and Japan—a role that placed him in the crosshairs of the US government after President Bush’s erroneous claim in his 2003 State of the Union speech that Saddam Hussein had tried to acquire significant quantities of uranium from Africa.* In Huby’s apartment on Avenue Foch in Paris’s posh sixteenth arrondissement hung pictures of Huby with presidents in the White House, the Élysée Palace, and the Kremlin. Huby smiled. “Let’s say it was eighty percent happenstance and ten percent intentional coincidence.”

“I’ll try to ignore the missing ten percent, which probably got lost  paying for some commission. We are talking about the Middle East, after all.”

“Try to check your Swiss instincts, Daniel. It doesn’t always have to add up to one hundred. Anyway, back to my question: Are you still doings things in Syria and the region?”

I took a sip of my cognac and nodded. To my surprise, Huby did not order another round but instead asked immediately for the bill.

“In that case, let’s discuss the rest on our walk,” Huby said as the waiter placed the bill on the table. “I’ll need to oxygenate my gray cells for this chat.” Huby pulled out his money clip and placed two hundred euros on the table. The headwaiter handed him his fedora, and we stepped outside the restaurant.

“Let’s go for the long loop, if you don’t mind,” Huby suggested. “We’ll end up at the Trocadéro, with a perfect view of the Eiffel Tower. My daily routine when I am in Paris.”

“The Eiffel Tower also looks lovely from where we are standing right now,” I said, not really in the mood for a three-mile trek in uncomfortable shoes. “Why don’t we talk here?”

“Crétin!” Huby chided me with feigned disgust. “You must work for that view, earn it with a crisp, honest walk.”

We both laughed as we started to stroll to Avenue Montaigne in the direction of the Champs-Élysées. We walked for a few minutes in silence before Huby began. “I was approached two weeks ago by a close friend. Actually, one of my oldest friends, going all the way back to elementary school.” He paused, lost in his thoughts. “Something terrible has happened to my friend. His son has gone missing in Syria,” he finally continued. Huby’s expression was pained.

For a brief moment, my mind went completely numb. Another missing person in Syria. Very, very few disappearances in Syria had happy endings, and I had just lived through an unnerving ordeal trying to find a kidnapped hostage. Against the backdrop of our foundation’s Project Bistar, I had been approached several times in 2013 and 2014 with requests for help in locating hostages and missing people in Syria—aid workers, journalists, military advisers, and the occasional adventure-seeking traveler. These requests came from a variety of corners—governments, families, friends of the missing persons—and for a variety of reasons, though they all were based on the assumption that because of my work in the region and the connections formed while interacting with Project Bistar participants and their political patrons, especially the regime in Damascus, I might know someone who knew someone who knew someone who could help. The classic Levantine arrangement, in other words.

From my own painful experiences, I knew how hard, bordering on the impossible, it would be to find the son of Huby’s friend in Syria, let alone finding him alive and negotiating his release. It was considered an accomplishment just to obtain reliable information on the fate or recent location of a missing person; it was a great accomplishment to obtain proof of life. I was unaware of any case of a released hostage that did not involve direct or indirect ransom payments or informal barter arrangements. I was still reeling from the bitter disappointment of my own recent failure.

Huby must have sensed that he had struck a nerve, because he did not say another word. We strode in complete silence until we turned left on the Champs-Élysées. Immediately, we were met by that typical Parisian cacophony: impatient drivers beeping their horns, a siren of a speeding police car, and the ubiquitous scooters that sounded like amped-up lawn mowers. The glory days of this elegant avenue between the Place de la Concorde and the Arc de Triomphe seemed long gone; at this moment, the street now was particularly gray and grimy.

From Proof of Life: Twenty Days on the Hunt for a Missing Person in the Middle East by Daniel Levin. Reprinted by permission of Algonquin Books of Chapel Hill. Copyright © 2021 by Daniel Levin. All Rights Reserved.

The son of a diplomat, Daniel Levin spent his early years in the Middle East and in Africa and then trained as a lawyer. Currently a board member of the Liechtenstein Foundation for State Governance, he has, for the past twenty years, worked with governments and development institutions worldwide, focusing on economic development and political reform through financial literacy, political inclusion, and constitutional initiatives. He is also engaged in track 3 diplomacy and mediation efforts in war zones. Levin's first book, Nothing but a Circus: Misadventures among the Powerful, was published in Germany, Japan, Russia, and the UK. Proof of Life is his first book to be published in the United States. He lives outside New York City. 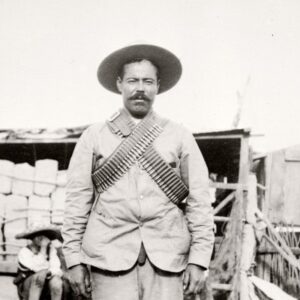 The alliance between Venustiano Carranza and Pancho Villa was shaky from the start. Neither man entirely trusted the other....
© LitHub
Back to top