Nick Petrie Reports from Somewhere on the North Coast of Iceland

Standing beside my 16-year-old son on a remote, rocky Icelandic shore, watching the small boat get smaller as it motored away, I began to grab hold of something I hadn’t known I’d lost.

We were at the beginning of a backpacking trip in Iceland’s Hornstrandir National Reserve, just the two of us, part of an 11-day bohemian guys’ adventure on the cheap. We’d been dropped there by boat on the edge of a remote fjord, along with the park’s ranger. There was no road access. Our return ride would arrive at a different, distant fjord in five days’ time. We had a lot of miles to cover to get there.

It was mid-June, at the very beginning of the season. This was the ranger’s first trip into the park that year. He wondered aloud if his little cabin would still be intact after the long winter.  We were 10 miles from the Arctic Circle, the temperature somewhere below 50 degrees, a thin, cold rain falling.

I’d already asked the ranger for any advice he might have. He looked me up and down, took in our mix of old and new gear, and, in what I was learning was typical Icelandic fashion, kept his advice to a minimum. Follow the rock cairns and you’ll be fine. When you hit the snow wall, stay left.

He smiled politely, wished us luck, and set off ahead at an impossible speed.

Now, we sat on the rocks under low wet clouds and watched the small boat get smaller still, wondering exactly what we’d gotten ourselves into.

The year before, the two of us had gone backpacking in Colorado on a research jaunt for my new novel, Light It Up. The weather there had been perfect. The alpine meadows were lush and green, and the air so thin and clear that each distant peak seemed close enough to touch.

This was turning out to be a different kind of trip.

My favorite things to do outside are to ride my mountain bike and backpack into wild country.  Although they’re very different experiences—one is fast and in the moment, the other slow and contemplative—what they share, and for me one of the primary appeals, is the element of risk.

That risk, while manageable, sharpens the mind and enhances the experience. If you go over the handlebars on your bike, you can land on your head. If you lose the trail on a pack trip, or if you take a tumble and break something, help can be a long time coming. The risk requires you to pay attention. The risk makes you feel alive.

In Colorado, I knew the risks and planned accordingly. But Rocky Mountain National Park is well-patrolled and busy, and, despite the remoteness of the place we’d chosen and our planned time bushwhacking off-trail, that trip didn’t push either of us past our comfort zone. It was pure fun. We stayed up late to watch the stars.

On that rocky beach in Hornstrandir, a remote corner of a remote island in a remote part of the world, I felt the isolation of a place in a way I never had before. It gave me the very clear understanding that it was possible for us to die out there. Not likely, but possible. If we did something stupid, or were just plain unlucky. Or if the weather turned truly foul, as it had the week before, when the wind and waves made it unsafe for the boat to pick up passengers for several days. I didn’t want to have to eat my boots.

My son runs cross-country and track, but he prefers longer distances. Two months ago he did his first half-marathon by accident. Out for a run in shorts and a light shirt in 25-degree Wisconsin weather, he didn’t feel like heading home, so he just kept going. When he finally made it back, he tracked his route and found that he’d run 14 miles.

He’s good company, and an even better travel companion. He’s an excellent navigator. He has decent taste in music, if you ignore a certain ironic predilection for 80s hair bands. He has a talent for finding great cheap restaurants, and he’s always got one eye peeled for a bookstore.

He’s also usually hungry. I didn’t want him to have to eat me.

Neither of us minded the rain, or the temperature. We like to be outside, my son and I, and we had good gear for the weather. Carrying a pack uphill tends to warm a body. But neither of us was quite prepared to feel as though we’d stepped off the edge of the map into the unknown.

My younger self would have laughed at the cautious middle-aged man I’ve become. Even with their risks, these trips are tame in comparison to what I used to do.

At 19, I left college to spend nine months wandering through Central and South America, a combination of hiking, hitch-hiking, and the kind of third-class buses where sometimes you ride on top with the chickens. I filled a dozen journals with stories and observations. My Spanish was good, but I had no idea what I was doing, no real plan but to keep pointed south. I had an open ticket home from Santiago, Chile, for when I ran out of money.

I bribed my way out of an arrest in Oaxaca, Mexico. I rode a canoe up the Rio Dulce in Guatemala, and spent the night in the ruins of Palenque, serenaded by howler monkeys. I climbed into open trucks with armed soldiers in Nicaragua, who insisted on buying me lunch. I soaked in Ecuadoran hot springs, hiked the Bolivian Altiplano, and tuned up my tan on the Pacific coast of the Atacama desert.

Later, in my twenties, I was building a renovation business and trying to learn to write fiction. Lean and strong from years of physical labor, I traveled all over the West between projects, always looking for the high, empty places, often alone. I was never a technical climber, not one of the true hard-core lunatics—I know some of those men and women, and I was never in their league, not even close—but I’d hike uphill for a week on hard salami, cold tortillas, and gorp, and I liked it.

Now nearing 50, I find myself astonished to make my living as a novelist, but I still don’t feel like I know what I’m doing. The difference now is that I’m more afraid to fail. There’s more at stake. I own a house. I have a retirement account. Some might regard me as a grown-up.

From time to time, I feel a constriction in my chest, a physical manifestation of the mental and emotional pressure I’ve put on myself. I have more to do and less time to do it. I always want my next book to be better. That next book is due in ten months, and all I have are some ill-formed ideas that experience tells me will not survive first contact with the page.

I am not a fast writer. I can already see the deadline clock ticking silently downward like a bomb in a bad movie.

Writing, for me, is uncomfortable. I’m unable to outline a book in advance. I just set out on a course and see where it takes me. As the same time, I am, as my friend Ingrid Thoft likes to say, a control enthusiast. I crave certainty. I want to know in advance how everything will end.

But I never do. Sometimes I don’t know the end until I’ve written it.

On that rocky, isolated beach, my son and I watched as the small boat disappeared into the Icelandic mist. The ranger was long gone. We were fairly certain we’d be picked up in five days, weather permitting. We simply had to begin. So we settled our packs on our backs and stepped into the drenched landscape.

Over those next days, we were often hungry, wet, cold, tired, and hurting. We followed thin, inconstant paths that soon vanished entirely. Our boots were soaked from the beginning. We walked from one rock cairn to the next, up into deep snow and dense cloud. We howled like wild men as we crossed snowmelt rivers barefoot, our pants rolled high, the water rising to our thighs.

That’s where I found what I’d forgotten.

The most difficult journeys make the best stories.

Now, if you’ll excuse me, I have a book to write.

Nick Petrie’s Light It Up is available now from Putnam.

Nick Petrie is the author of three novels in the Peter Ash series: The Drifter, Burning Bright, and Light It Up. He received his MFA in fiction from the University of Washington. A husband and father, he lives in Milwaukee.

When Your 60-Year-Old Family Mystery Shows Up on Netflix 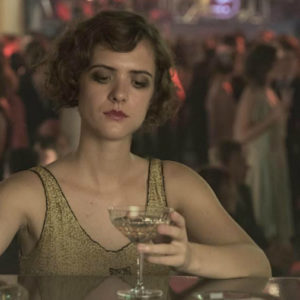 Volker Kutscher’s Babylon Berlin was the crime writing hit of 2016 in the UK. Berlin is a sprawling, complex roman policier...
© LitHub
Back to top