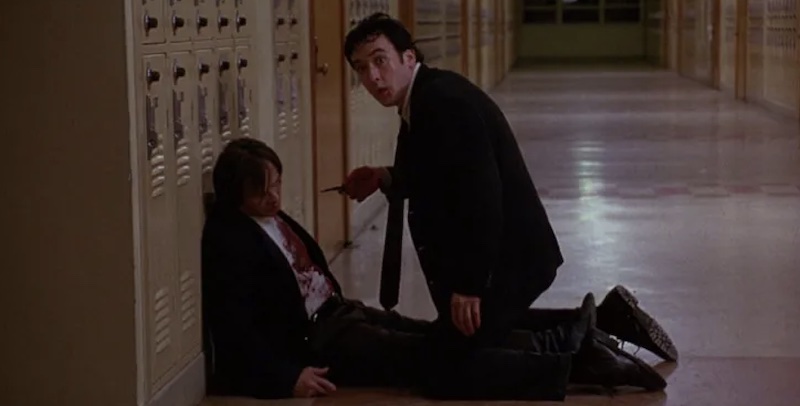 These scenes prove that the pen is indeed mightier than the sword. In the right hands.

One of our favorite things, over at the CrimeReads desk, is when a character in a movie grabs a pen and uses it as a weapon in a fight scene. Don’t ask me why we enjoy it so much. Maybe it’s because we’re writers. I wouldn’t read too much into it.

Anyway, for fun, we picked the ten best movie scenes where someone gets offed by a pen. What are the criteria? Well, first of all, I’m accepting “pencils” in lieu of pens. They might not be interchangeable on a Scantron, but they are for the purposes of this list. Second, we are not counting staking vampires  or other undead entities with pencils, so this rules out From Dusk Til Dawn and Fright Night.

Third, and this is the big one, if the pen doesn’t directly cause someone’s death (such as via stabbing), it must be instrumental in incapacitating them so they can be dispatched in a secondary manner. No Stoker. This list isn’t for “attacks” via pen, so any scene where someone is not seriously, basically-mortally wounded… gets written off. 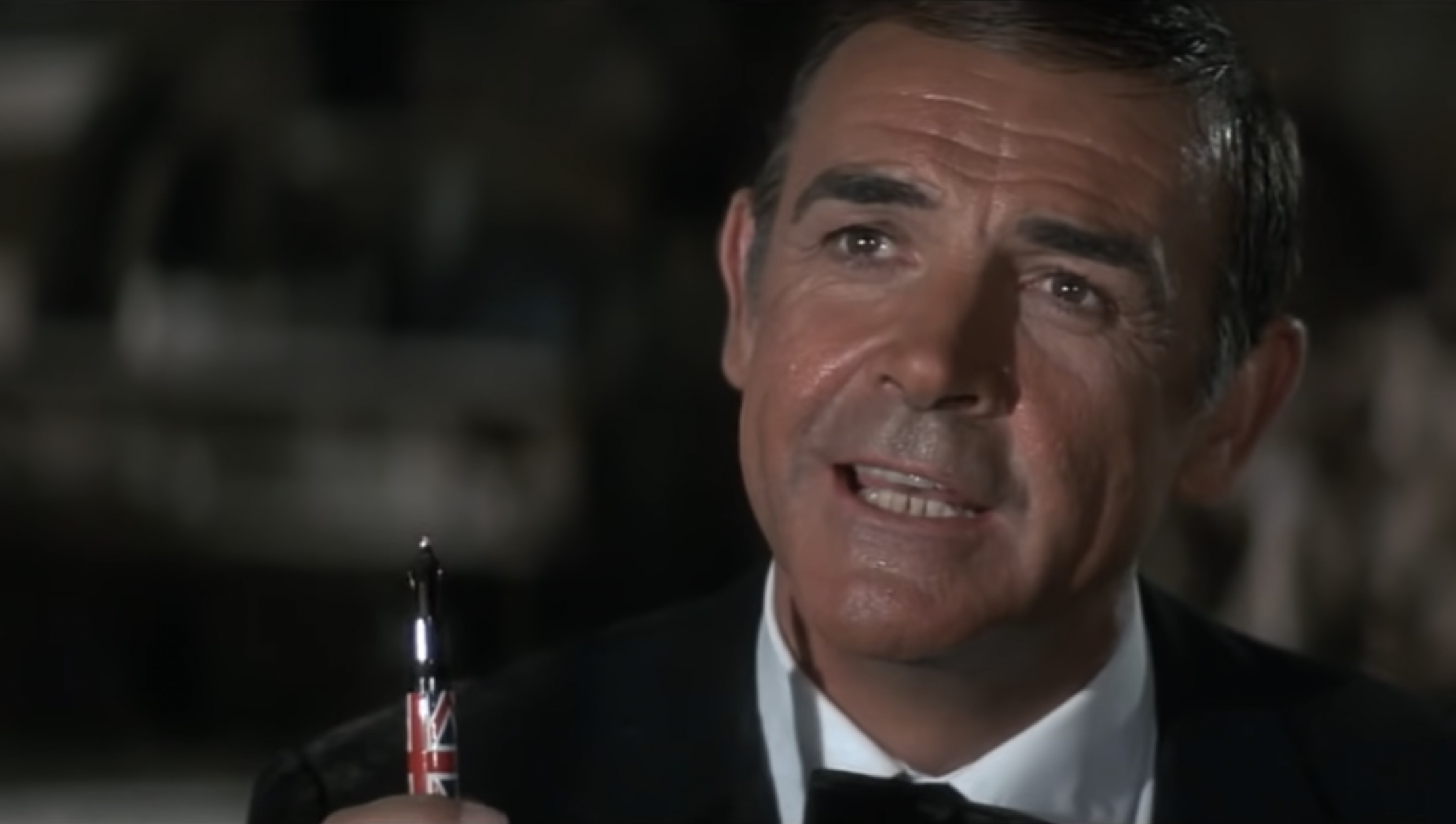 There are a few lethal devices concealed in ordinary-looking pens, in the Bond movies. Moonraker has the needle pen, GoldenEye has the exploding pen, etc. But in Never Say Never Again, the off-brand reboot starring Sean Connery but made during the Moore tenure, Q whips 007 up a fountain pen containing a dart gun. It has the Union Jack on it, but it might as well have the nineteenth-century Russian Empire Tricolour flag on it, because this baby is Chekhov’s pen. Bond will use it later to kill a S.P.E.C.T.R.E. agent named Fatima Blush when she attempts to get him to sign a contract. 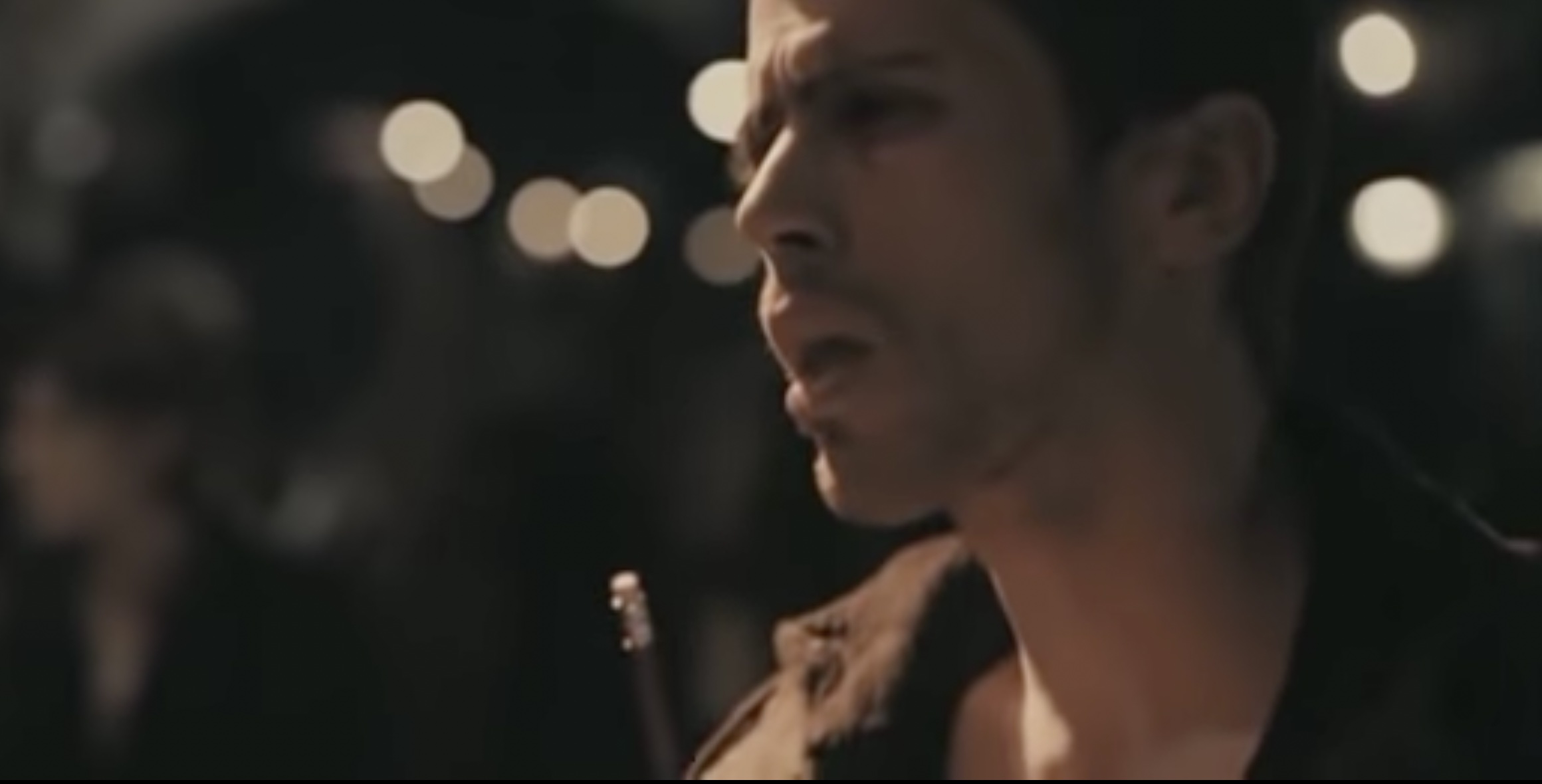 There’s a scene in Guy Ritchie’s slick small-time-crooks-encounter-Russian-mobsters-and-there’s-a-nightclub movie RocknRolla where a junkie named Johnny Quid and his friend are prevented from entering a club by a tough bouncer. After the bouncer punches the friend to the ground, Quid walks up to him and stabs him countless times with a pencil before grabbing a metal garbage can lid and smashing him with it. It’s a very grungy sequence, intercut with shots of the punk band playing inside the club.

Wes Craven’s politically-themed kidnapping-in-the-sky movie features exactly the sort of pen-stabbing scene that feels very plausible. Rachel McAdams has boarded a plane when Cillian Murphy sits next to her and it turns out he’s kidnapping her! So as the plane lands, she takes a pen and shoves it through his windpipe. That’s what any rational person would do in this situation, and it doesn’t take a whole lotta martial arts skill to pull it off. DIY defense. He does live, but he has a hole in his throat so he’s very weak.

I love Indiana Jones and the Last Last Crusade, a film about how Indiana Jones learns to love his uptight dad. And his dad learns to love him, too, and embrace the less-uptight way Indy lives his life and does his job. In the first scene that indicates Henry Jones Sr. (Sean Connery, again!) is coming around to a new way of doing things, he takes a fountain pen from jacket picket and splashes the ink all over the Nazi who has grabbed him from behind, leading to his knocking the Nazi unconscious or killing him or something. This causes Marcus Brody to announce, “The pen is mightier than the sword!” Huzzah!

Tim Burton’s Batman film gives us the only scene on this list in which someone is murdered by a feather pen. If that seems hard enough to pull off, it’s also *thrown* into the guy’s neck. As you might suspect, this magic trick is the work of the Joker. 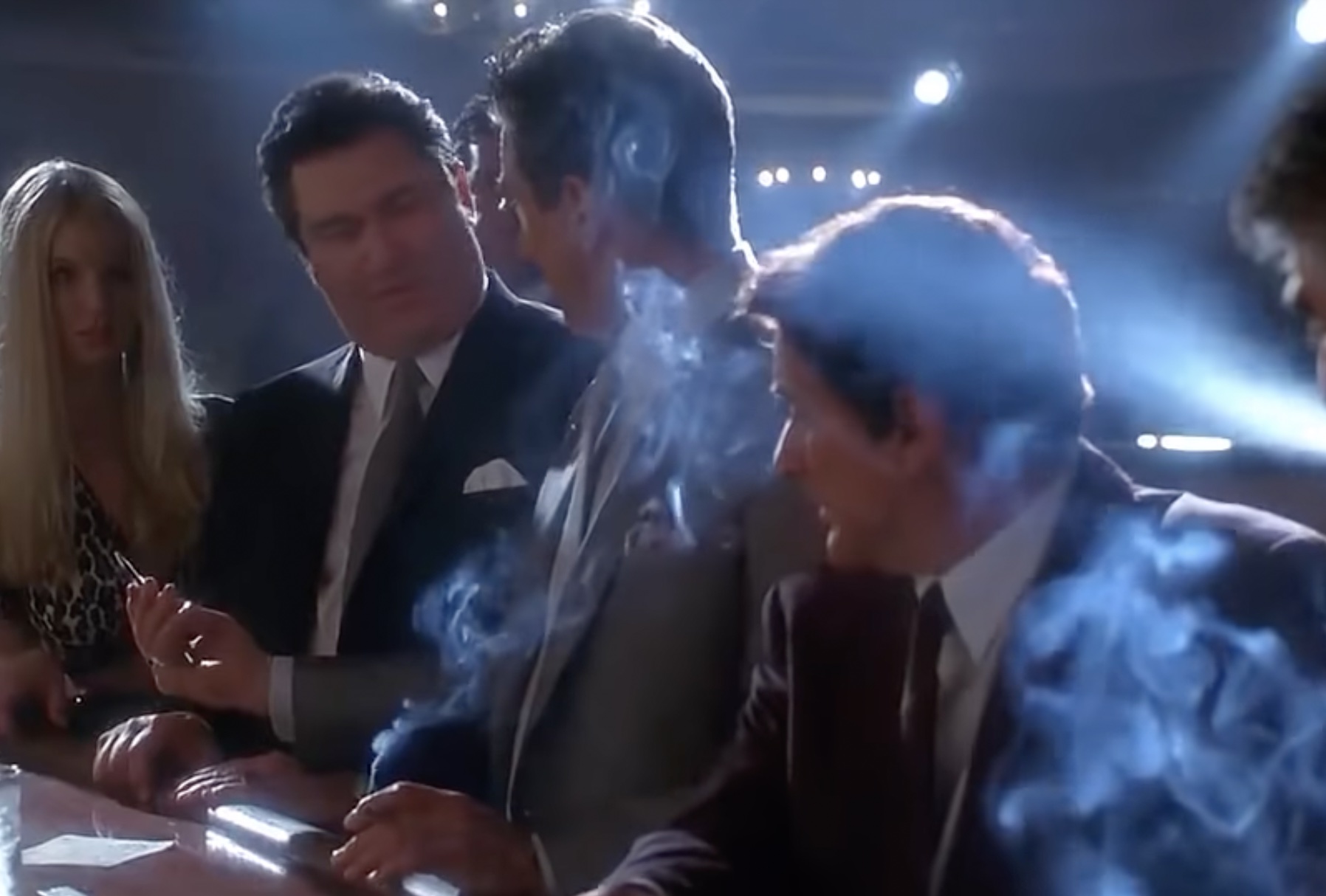 No actor is ever more memorable than Joe Pesci when he’s directed by Martin Scorsese. And his most memorable scene in Casino is when Robert DeNiro is condescended to by a jerk at the bar, and Joe Pesci grabs the guy’s nice pen and stabs him in the neck with it bunch of times, before kicking his bleeding and prostrate body over and over as DeNiro watches, nonplussed. 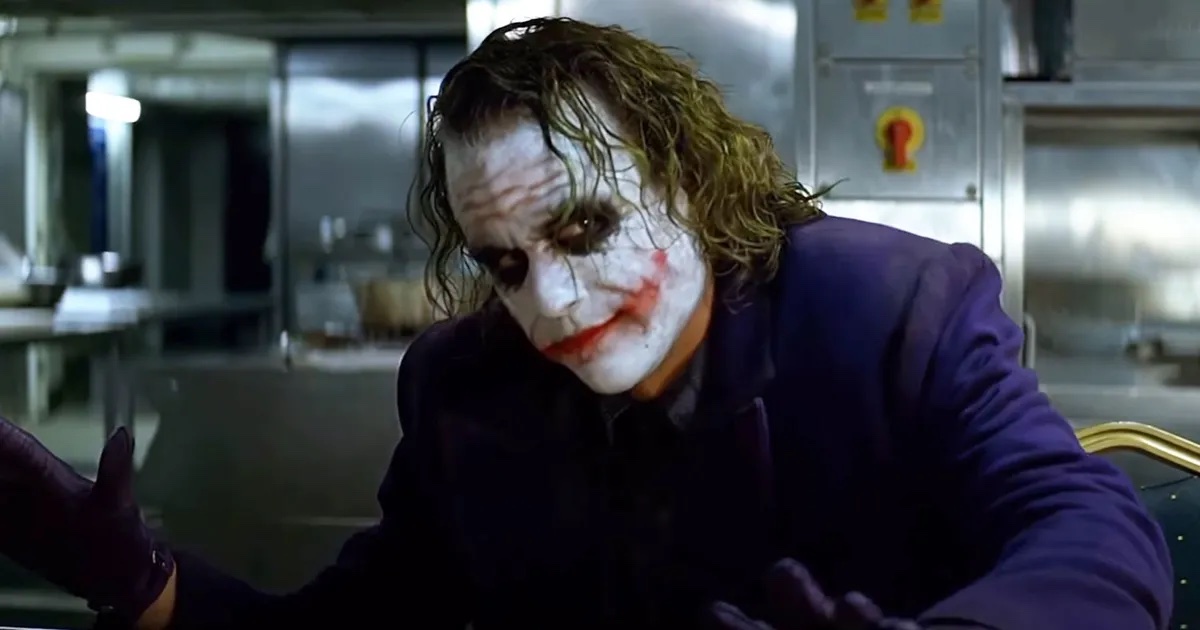 The Joker’s back! But it’s Heath Ledger’s joker, and this time, it’s even more savage a killing. He sticks a pencil into a table, promises to make it disappear, and then smashes a guy’s head into it, which, when the guy pops back up, pulls the pencil out of the table.

In the first John Wick movie, Michael Nyqvist’s character references how famous-assassin John Wick is rumored to have once killed someone with a pencil. And in its sequel, John Wick gets to demonstrate how he’s able to do that for real. 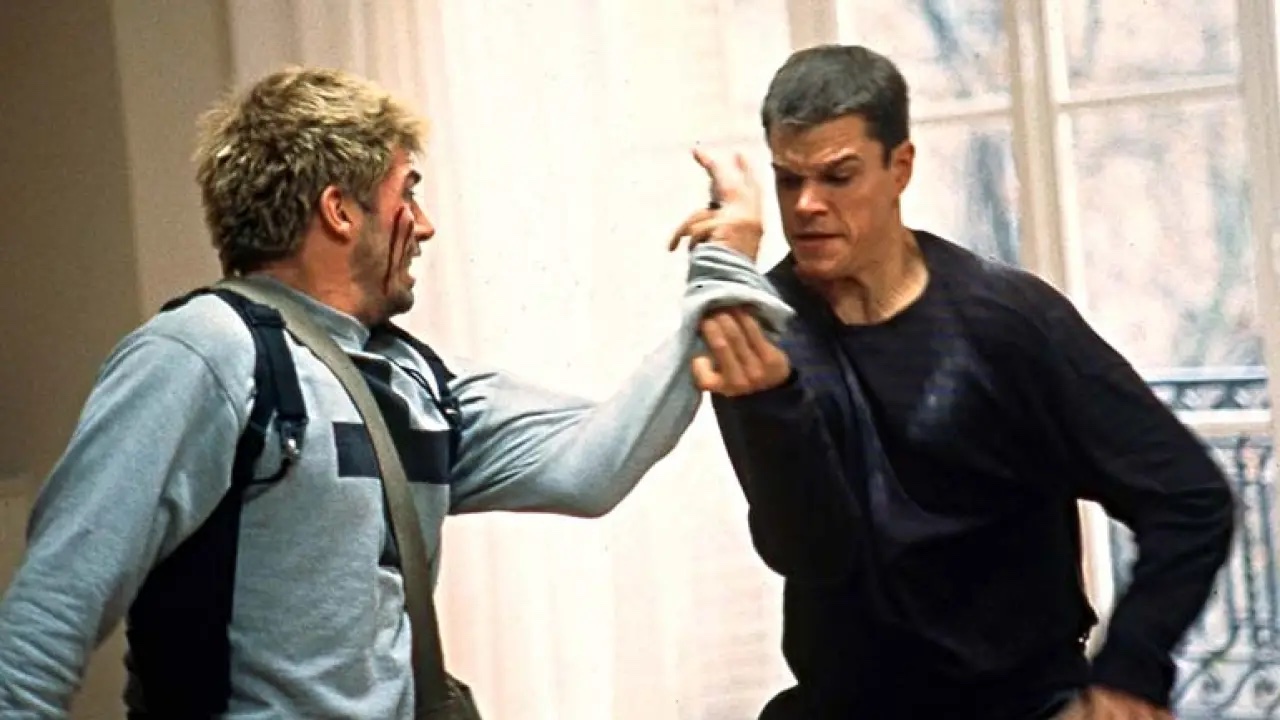 In this scene, the amnesiac-with-high-octane-muscle-memory Jason Bourne and his new friend Marie are wandering around his Paris apartment, trying to see if Bourne can remember anything about his past or figure out any clues… when an assassin pops out and fights him. It is one of the most masterful and memorable fight scenes on this list—a nonstop adrenaline rush, and it’s fairly shocking for all parties involved when Bourne automatically grabs a pen off the desk and uses it to defend himself against a knife. 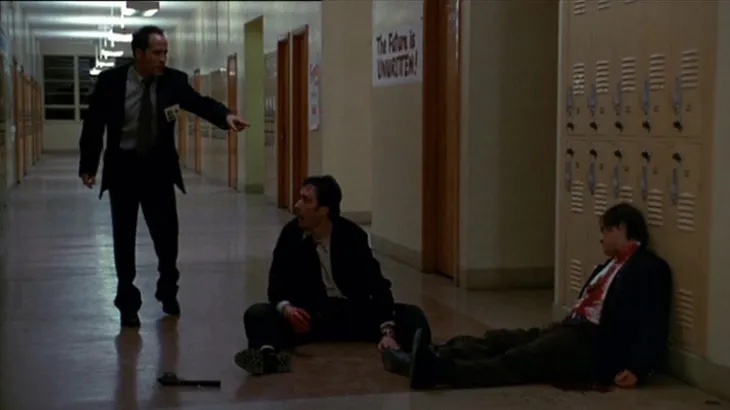 In this perfect movie, John Cusack plays a hitman who goes to his hometown of Grosse Pointe, Michigan and winds up attending his high-school reunion. (All three CrimeReads editors adore this movie, and that doesn’t happen too often.) He’s having a change of heart about his career, and as he travels down memory lane, he starts to rekindle things with his high-school girlfriend Minnie Driver, connect with his old friend Jeremy Piven, and, uh, fight and kill an assassin who arrives at his reunion to take him down. And yes, he kills the guy with a pen, all while “Mirror in the Bathroom” plays in the background, reminding the audience that, to paraphrase, all John Cusak’s crimes from here on in are in self defense. 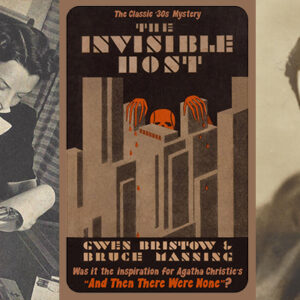