The Crime Fiction of New Orleans

Grit and Grandeur in The Big Easy

Last summer I spent a couple of days in New Orleans. I strolled the Vieux Carré French Quarter, had lunch on an iron wrought balcony, imagined buying a rundown Garden District Victorian and doing it up as my own Southern Gothic retreat, and then I wandered over to the charming Octavia Books (on Octavia Street, Uptown). Independent bookstores are by far the best places to get the lowdown on the regional crime-writing scene—the local writers who haven’t broken through yet, those true crime stories that haven’t made the international press, books local folks are reading. Octavia Books is no exception.

Co-owner Tom Lowenberg recommended a bunch of fantastic Grit Noir authors (that don’t fit easily into any Crime and the City, but were good so I’ll name check them: Chris Offutt’s Country Dark and Taylor Brown’s Gods of Howl Mountain, both 2018), while his staff pitched in with some terrific New Orleans writers, before his customers started giving me their recommendations. That’s the great thing about indie bookstores. I don’t think I would ever have come across Randy Fertel’s The Gorilla Man and the Empress of Steak (2011), which, while not strictly speaking a crime book, encompasses many a local rogue and a dodgy dealing or three. And it’s pure New Orleans: the Old Jewish Quarter on Rampart Street, the denizens of “Back o’ Town,” jazz, incestuous local politics, the bayous, and the French Quarter.

Fertel’s memoir of his family delivers on what makes New Orleans such fertile territory for crime writers—atmosphere. New Orleans crime novels invariably have that in spades. David Fulmer’s Valentin St. Cyr series is steeped in the Vieux Carré of the early twentieth century. The series starts with Chasing the Devil’s Tail (2001) in which St. Cyr, a Creole detective, is policing the non-stop party that is 1907 Storyville, then America’s most notorious Red Light District. The books pit St. Cyr against—and sometimes alongside—the “King of Storyville” Tom Anderson (a real character) investigating a series of prostitute murders. The St. Cyr series now runs to a dozen books. All are standalone, though there are narrative arcs that run the whole series. Still, the third St. Cyr book, Rampart Street (2006), and especially Lost River (2008), stand out as among Fulmer’s best. If you’re looking to taste the dubious delights of New Orleans in 1913 then Lost River is a great starting point.

So, too, is Ray Celestin’s The Axeman’s Jazz (2014), set in 1919 New Orleans, and another tour through the back streets of the French Quarter and the Italian sections of town with detectives Michael Talbot and Luca d’Andrea, who switched sides to work for the New Orleans mafia. Along with them comes Ida, an African-American Pinkerton agent, and her good friend, a young struggling musician called Louis Armstrong (whom you may have heard of!). And while we’re in 1919 New Orleans, there’s also King Zeno (2018) by Nathaniel Rich, which features the Spanish Flu and the Italian mafia in the aftermath of World War I, both causing havoc in the Quarter, while jazz is emerging in Storyville, and a new canal is being built in the Ninth Ward.

James Sallis’s Lew Griffin series is all New Orleans humidity and long, hot, steamy nights. The first two books in the series The Long Legged Fly (1992) and Moth (1993) are almost stream-of-consciousness. An African-American PI Griffin drifts through the Big Easy—the Gothic cemeteries, cheap motels and bars—seemingly with no plan beyond the next page. He falls in and out of a series of random hook ups, investigating cases which ebb and flow as friends, suspects, and witnesses drop in and out. Sallis’s writing is hard to describe, though perhaps he is most akin to Dorothy B. Hughes, another American writer who seems never to know where she’s going after the next page, but somehow keeps the whole high-wire act of her novels from tumbling to earth in a disaster. The Lew Griffin series ran though another five novels up to Ghost of a Flea in 2001. Sallis has been somewhat rediscovered in recent years, lauded as (according to No Exit Press) “an unsung genius of crime writing” and praised by the likes of Ian Rankin, Lawrence Block and Harlan Ellison. New editions of his novels have come out, and hopefully Sallis continues to find new fans.

There are also those authors who enjoy the occasional drop into New Orleans, though aren’t exclusive to the town. Ace Atkins’s Nick Travers noir series roams the South, but its hero is an ex-New Orleans Saint turned Tulane University blues history professor. In the first book of the series, Crossroad Blues (1998), Travers is criss-crossing the Mississippi Delta on the trail of bluesman Robert Johnson’s lost recordings. For New Orleans fans, the third book in the series, Dark End of the Street (2003), is perhaps the best as Travers starts in New Orleans and trawls through the South confronting the Dixie Mafia, a murderous Elvis impersonator, and all the finery of America’s southern underbelly.

Don Bruns is somewhat different. His New Orleans features an ex-Detroit cop who has relocated to the Big Easy; the Quentin Archer series is all humid underbelly, voodoo, and homicide. There are three books in the series: Casting Bones (2007) sees a top judge slaughtered and a link to a voodoo practitioner; Thrill Kill (2017) puts a serial killer right in the heart of Mardi Gras; while No Second Chances (2018) pits a cop killer against a voodoo queen. It’s all very N’Orleans.

“That air of oil and garbage that circles New Orleans” is how anti-hero Roy Cady sees the Big Easy in Nic Pizzolatto’s (better known for writing the Bayou-set first season of True Detective) 2010 ultra-noir Galveston. But he likes the casual ease of the city and only lights out for East Texas when forced to by some guys trying to kill him. That’s the contradiction about New Orleans—it’s gritty, dirty, and a little too easily prone to killing; but it’s also hopelessly romantic. There’s something old world, European, disconnected, about New Orleans; it feels less like an American city than any other.

Article continues after advertisement
That’s the contradiction about New Orleans—it’s gritty, dirty, and a little too easily prone to killing; but it’s also hopelessly romantic. There’s something old world, European, disconnected, about New Orleans; it feels less like an American city than any other.

And that might just be true of all Louisiana. We can’t not mention James Lee Burke’s Dave Robicheaux series here, one of America’s great and enduring misfit sleuths. Burke’s 22 Robicheaux novels simply drip with Louisiana atmosphere, and in The Tin Roof Blowdown (2007) he wrote a great, heartfelt response to Hurricane Katrina. James Lee Burke has a legion of high-powered crime writing fans from Don Winslow to Michael Connelly. It’s hard to pick a favorite Robicheaux, though Heaven’s Prisoners (1998), featuring a mysterious plane crash near New Orleans, is among the best for sure.

A few non-fiction reads on New Orleans… Gary Krist’s Empire of Sin: A Story of Sex, Murder and the Battle of New Orleans (2014) is a great history of the city from a decidedly underworld perspective. Dan Baum’s Nine Lives: Mystery, Magic, Death, and Life in New Orleans (2010) is the story of the city and its denizens between Hurricane Betsy, which transformed New Orleans in the 1960s, and the devastation of Katrina in 2005. Cari Lynn and Kellie Martin have novelized the life of Mary Deubler, who rose from Storyville “alley whore” to “Basin Street Queen” as Madame Josie Arlington at the start of the twentieth century in Madam: A Novel of New Orleans (2014). It’s pure Seventh Ward rags-to-riches. And then there’s Frenchy Brouillette, “the Keith Richards of the American Mafia,” stabbed to death in 2015 after running the Frenchtown mafia for half a century; Matthew Randazzo’s Mr. New Orleans: The Life of a Big Easy Underworld Legend (2010) tells Frenchy’s tale.

I need to mention two final books. Margaret Wilkerson Sexton’s A Kind of Freedom (2017) is not strictly speaking a crime book, but crimes and criminals do feature. It is a superlative piece of writing spanning the various incarnations of New Orleans in wartime (1944), Reaganomics (1986), and post-Katrina (2010). And don’t miss Elliot Chaze’s Black Wings Has my Angel (1953), a superb noir that has many fans (and has now been years in pre-production as an on-again, off-again movie). The vast majority of the book takes place in rural locations that won’t ever make a Crime and the City feature, but there is one New Orleans scene. An escaped con and a mobster’s girlfriend on the lam rob a cash truck and then go spend the proceeds in New Orleans before having to move on sharpish. Virginia, the gangster’s moll, says: “I want to stay at the St. Charles Hotel and sit up there on the balcony of the mezzanine thing and look down through the wrought iron and see the Frenchy people.” Yeah, me too, Virginia, me too. 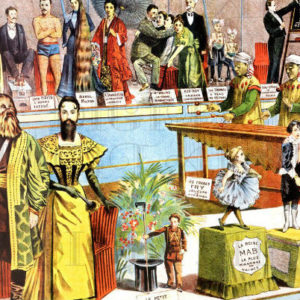 In truth, from the Golden Age of marvels onward, the honest acts and wonders of a circus, a carnival, a midway or a Ten-in-One...
© LitHub
Back to top