The Crime Novels of Christmas

A merry rundown of crime fiction set during the holiday season.

Last festive season I took a short break from writing Crime and the City columns to write about the wonderful Christmas mysteries published (and now increasingly republished) back in the Golden Age of crime writing: Christmas Mysteries: A Tradition Revived.

Seems few major crime writers have managed to resist the lure of Christmas. George Simenon is a sort of bridge between the Golden Age and more contemporary crime writing. His Un Noël de Maigret (Maigret’s Christmas) was first published in 1950 as three short stories (and now again as A Maigret Christmas and Other Stories). It is Christmas time in post-war Paris and the sparkling lights and glittering decorations are back on the Champs-Elysées now the Nazis are gone. But in each, Jules Maigret is called away from his Christmas dinner and Mme. Maigret to investigate a festive murder—first in a nightclub, then by a mysterious yuletide visitor, and thirdly to a cat-and-mouse chase across the snowy French capital.

The big names of right now also like writing about Christmas it would seem. James Ellroy’s Perfidia (2014) takes place over that most fateful of American Christmases, December 1941, the LAPD faced with a politically sensitive murder while the threat of war with Japan looms large. Michael Connelly’s Harry Bosch spends a temperate Los Angeles Christmas investigating a burglar killed in mid-heist, a death that links back to Harry’s past in “Christmas Even”—one of three short stories in Angle of Investigation (2011). Meanwhile Lee Child’s Jack Reacher likes to head south at Christmas to get some seasonal warmth in Southern California. However, in “The Christmas Scorpion” (2018) Jack finds himself in a rare SoCal blizzard, finding refuge in a snowed-in roadhouse with four strangers including two British military police separated by the weather from the VIP they are detailed to protect. They need Reacher’s help.

Then we have George Pelecanos’s Nick Stefanos, who spends a drunken 1990s DC Christmas sitting on bar stools listening to combos play jazzy Christmas standards, surrounded by uninspiring Christmas lights, empty bottles of Bud and witnessing shootings in Nick’s Trip (2013), the second book in the Nick Stefanos trilogy. JD Robb’s (aka the romance writer Nora Roberts) Lieutenant Eve Dallas does Christmas in the ‘…In Death’ series, set in mid-21st century New York, in Festive in Death (2014). A personal trainer is inconveniently found dead right when Eve is about to attend a glittering Christmas party. British detectives work over Christmas too. R.D. Wingfield’s Detective Inspector Jack Frost was launched in 1984 with the novel Frost at Christmas where the young daughter of a prostitute has gone missing close to the Christmas holidays.

Peter Kirby’s cop Inspector Luc Vanier spends a lot of time in a very cold, but festive, Montreal. In The Dead of Winter (2013) Vanier is drinking his way through Christmas Eve when he is called out to investigate the murder of five homeless people. Cue a Christmas spent largely among the down-and-out shelters, soup kitchens and the freezing streets of Quebec. Talking of Canada and Quebec there’s also Louise Penny’s A Fatal Grace (2007, titled Dead Cold in some markets) which finds Chief Inspector Armand Gamache in the Québécois village of Three Pines at a Christmas curling competition where a highly suspect electrocution has occurred.

The Queen of Victorian crime Anne Perry is obviously a fan of Christmas. By that I mean Anne Perry really, really likes Christmas. So much so that she’s written sixteen stand-alone Christmas stories (which are gathered together in half a dozen collections too). Many of the stories take characters from Perry’s successful and much-loved series featuring Victorian London coppers Thomas Pitt and William Monk. Perry’s first festive Victorian murder mystery, A Christmas Journey (2003) features Lady Vespasia Cumming-Gould (a character from the Thomas Pitt series) planning a Christmas vacation in northern Scotland. The series rolls on with different characters and locations—invariably rather festive British villages and stately homes, but also A Christmas Escape (2016) that starts with a murder at Christmas 1866 on the Italian volcanic island of Stromboli and A New York Christmas (2015).

Those who like a warmer Christmas may also prefer to spend it on the Greek island of Armonos with Anne Zouroudi’s much loved “Greek Hercule Poirot” Detective Hermes Diaktoros. In “The Demons of December: A Greek Detective Christmas Short Story” (2018) Hermes just wants to relax over the festive season and get away from Athens for a while, but a death and an island community at war with each other rather ruin that and mean he has yet another murder to solve.

But for most of us Christmas is all about snow and winter. Tasha Alexander’s Lady Emily series of 1890s-set mysteries includes Star of the East (2018). Lady Emily, and her diplomat husband Colin Hargreaves, are at a Christmas party in rural Kent that includes the family of Ala Kapur Singh, a powerful Punjabi maharaja who has come to England after receiving the Order of the Star of India. Then a fabulous diamond disappears and Lady Emily spends Christmas on the case. Faith Martin’s The Winter Mystery (2011, also called A Fatal Fall of Snow in some markets) is set not too far away, in Oxfordshire and the Cotswolds, with cook-for-hire Jenny Starling spending Christmas in a snowed-in country house cooking all the traditional food she loves. But the family she’s working for are not so full of the seasonal spirit. In fact, they seem to hate each other. Cue a dead body; an incompetent detective; and a cook that has to turn copper. And then there’s Trish Harnetiaux’s The Secret Santa (2019), where a lavish Christmas party in an isolated mansion turns nasty as someone is out for revenge in what turns into a classic locked room mystery.

And finally, a slightly off-beat choice for the season, and one not always thought of as a crime novel, but seasonal and worthy of inclusion—W. Somerset Maugham’s Christmas Holiday (1939). It’s a tale of Paris after the Great War, Russian émigrés displaced by the Bolsheviks, nightclubs, dope dealers and murderers. For Christmas, Englishman Charley Mason’s father gives him a trip to Paris, all expenses paid. It should have been fun, but on his first night Charley meets a woman whose story will forever change his life. Lydia, a “White Russian” in exile, forced to dance in a nightclub, a prostitute, and linked inextricably to a bad man. On Christmas Day, in a slightly down-at-heel Parisian hotel Charley and Lydia stay in his room all day long, in front of a little fire, sending down to the concierge for food, while Lydia tells her story. It’s one of Maugham’s most underrated novels, and one of his most political too—the plight of the Russian émigrés from Bolshevism being very current at the time he wrote the book—and is a great description of how a man and a woman, exiled from their homeland, forced to do anything to survive, can easily slip into criminality, vice and murder.

Just the thing for the holidays!! 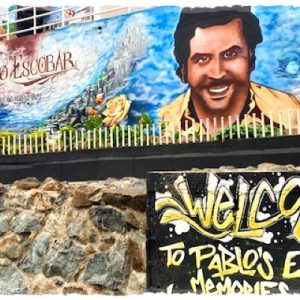 At 7 a.m. on a Friday morning in early August, the streets of Colombia’s second largest city were a hive of activity. It made...
© LitHub
Back to top