Which International Thriller Should You Binge This Weekend? November 2021

In the time since I last wrote this column Squid Game became the world’s favorite show and with good reason, it’s an incredibly exciting ride, but I’m going to just go ahead and assume that by now, the start of November, you’ve already filled up on Squid Game and all the explainers and message board theories that followed, and you’re in search of something new. You’ve come to the right place. Perhaps you’d like another twisty, stylish Korean thriller? Or how about some German grad students solving the mysteries of the human body? November streaming has all that, plus the tried and true British mysteries your parents are going to want to talk about at the holidays.

My Name
Seasons: 1
Where to Stream: Netflix

A new thriller out of South Korea follows the story of a daughter hellbent on revenge for her father’s death, and in pursuit of same swears her fealty to a local crime lord. The crime lord directs her to join the police, where she’s tasked with rooting out local crime lords, but is also secretly on the hunt for the cop who killed her father. Does that sound like a confusing swirl of shifting allegiances and identities? Good, because it is! It’s an over-the-top, visually impressive melodrama that will have you hooked if you give it a chance.

Biohackers
Seasons: 2
Where to Stream: Netflix

Back with a new season, Biohackers pulls off a trick that normally wouldn’t work—wiping out its main character’s memory, forcing her to re-solve a few mysteries—but sort of does, since the series itself is about cutting-edge medical procedures and ethically dubious human genetic and neurological experiments. So you can at least forgive them succumbing to the trope. As ever, what you’re coming for with Biohackers is a glimpse into life at the University of Freiburg, an elite academic enclave perched on a hillside deep in the Black Forest, where everyone rides bicycles to and from cafes, bars, and lecture halls, exuberantly making medical breakthroughs in between hookups. It’s a good bit of fun, really.

If the phrase “Norwegian Western” perks your ears up…

Welcome to Utmark
Seasons: 1
Where to Stream: HBO Max

Welcome to Utmark is a Norwegian Western. For me, that was really enough of a sell to give the series a shot, and turns out it’s a surprisingly engaging (and oftentimes just downright strange) vision of that traditional American form, run through the ringer of Nordic eccentricities and hangups. That makes for pretty interesting viewing, and true to its cinematic heritage, we get a lot of lingering, brooding landscape shots, only in this instance the sun is really low on the horizon, if it’s there at all. And there’s family drama, so buckle in for some of that, too. All the makings of a good weekend binge watch.

If you like British procedurals tethered to real events…

The second season of the runaway British hit is now available in the US on Acorn TV, and the action is just as gripping as ever. For those unfamiliar, Manhunt (which more or less had everyone in Britain watching on successive nights) bases its stories on real-life crimes; in season one it was the murder of Amélie Delagrange; in season two it’s serial rapist Delroy Grant. The action follows a London-based investigative team and is sure to raise your heartbeat over the course of an episode and slide you right into the next chapter. Perfect for a weekend screening, if you’re interested in British cop shows, London, or just drama.

If you’re reading the new John Banville book, or you just like Gabriel Byrne…

Quirke
Seasons: 1
Where to Stream: Britbox

If you don’t already have the Britbox service, maybe this is the weekend you try it out? You’ll find there plenty of options for the Anglo-curious (hundreds of series, really, and many, many of them crime and mystery), but why not give an Irish story a shot? Granted the show’s a few years old by now but one thing that never ages in Gabriel Byrne’s charisma. Follow him on an investigation that exposes layer upon layer of corruption in 1950s Dublin. Plus, they’re based on the Quirke novels by “Benjamin Black,” a series recently taken back up again by its author, now writing under his own well-known name, John Banville. 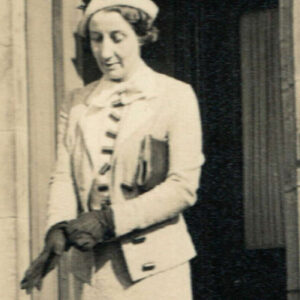 This year sees the 125th anniversary of the birth of Elizabeth Mackintosh. Under the name Gordon Daviot she achieved distinction...
© LitHub
Back to top