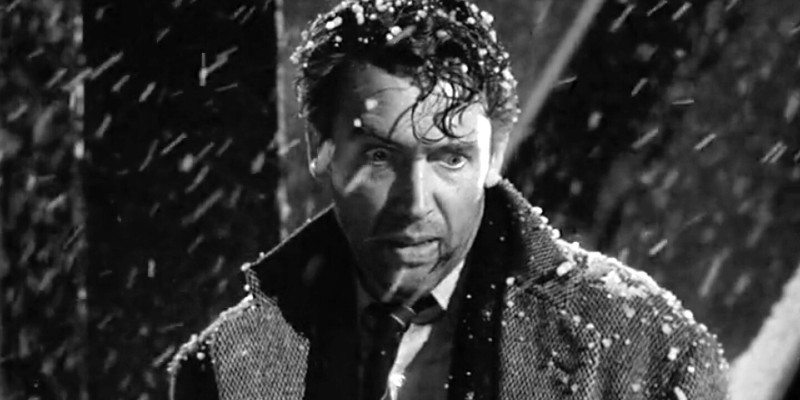 The quintessential Christmas movie is also a reverse noir.

In such stories, as the great Cornell Woolrich succinctly put it, “first you dream, then you die.”

So, if that is the case, how does It’s a Wonderful Life, the tear-jerking family friendly Christmas classic have anything to do with noir?

It is because It’s a Wonderful Life is a reverse noir.

Or to put it another way it is a kind of film blanc.

As Aristotle pointed out, all dramatic stories have to do with two things: fear and pity.

Fear is the motivational power behind most human action. Why do we want more money? Because we fear not having shelter or food i.e. dying. Why do we want fancy cars and jobs and more status? So that we can have access to contacts and money which again helps stave off fear and death. Even the sex drive can be seen as fear-driven as the purpose of sex is to create new life that again beats back death for another generation.

But on the other hand, we also are driven by pity; that is, love and concern not just for ourselves but for another.

Anything that delights us without giving us any personal selfish gain—puppies, art, music, sunsets, helping an old lady across the street—appeals to the human drive within us for what Aristotle called pity.

Aristotle pointed out that the best way to arouse or explore human fear and pity in a drama is to have a situation where a relatable character goes from a good to bad fortune by making a mistake.

In a noir this mistake is often the fear-driven decision to commit a perfect crime that seems like it will bring gain (dispel fear) only to have it (pitifully) blow up in the character’s face.

We can see this clearly in Double Indemnity where an insurance salesman driven by lust and greed makes the mistake of committing a murder that leads to his own regretful pitiful ruin.

But in It’s a Wonderful Life, this exploration of fear and pity is done not in the classic first fear-then-pity sequence of a noir.

It is done in the opposite way with the pity first and the fear second.

Aristotle said pity is aroused by unmerited misfortune and fear by the misfortune of a man like ourselves.

This describes the life of George Bailey to a T.

Because from the beginning of It’s a Wonderful Life, we see that pity-inducing unmerited good-to-bad fortune is pretty much the constant refrain in everyman George Bailey’s life.

Then worst of all on Christmas Eve, his uncle loses the Bailey savings and loan deposits, ensuring the ruin of all George Bailey has struggled for in his life before sending George to jail.

Facing this ruin and feeling that all the difficult pitiful sacrifices in his life have all led to nothing but failure, George snaps.

Pity turns to fearful despair as George decides to jump off a bridge.

There at the bridge, after he is saved by Clarence, the angel—who has cleverly jumped into the water to be saved by George before he can jump himself—George, still embittered, remarks that it would probably be better had he never been born at all.

It is here where we see the terror-laden noir influence within the film come to vivid, seedy underbelly life.

Because as George and Clarence head back into Bedford Falls, it has suddenly been transformed from a bucolic small town out of a Norman Rockwell painting into what seems to be the redlight strip of a hard-boiled city.

In place after place, we see a hell-like noir Bedford Falls that would have been had George not made all his sacrifices.

In this nightmarish Bedford Falls, his vivacious girl-next-door loving wife is a sad depressed spinster and his old beloved boss at the corner drug store is a homeless drunk whom the townspeople mercilessly humiliate.

With this dark view of a world without George, we see that George is in essence an anti-noir protagonist who could have but did not make the selfish fear-driven mistakes that often lead to a pitiful end.

On the contrary, George wisely and nobly took on the chin each of the painful, pitiful slings and arrows of outrageous fortune as they arrived in his life and so avoided the fearful .38 slug in the belly that Walter Neff in Double Indemnity receives for making the take-the-easy-way-out, get-rich-quick mistake of murdering a man for fifty thousand dollars and a woman that he never gets.

After his trip to the hellscape noir Bedford Falls from which his painful sacrifices saved his friends and family and entire town, George returns back to the Norman Rockwell Bedford Falls newly awake with the sudden realization of how wrong and silly his fear of ruin was.

For how can he be a ruin when it was he himself who had been heroically saving Bedford Falls from ruin day in day out since he was born!

When this happens, his bitter suicidal despair transforms to life-affirming Christmas joy as George comes to a new understanding of the true value of his sacrifices and his life.

It is the revelation (and yearly reminder) of this simple, yet deeply profound universal truth that, in the grand scheme of things, the true value of human life lies not in money or status but in the often painful day-to-day sacrifices we make for others, which is why It’s a Wonderful Life is a perennial classic. 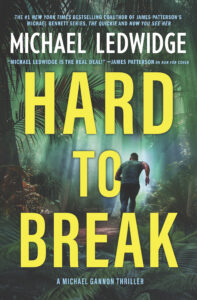 The Best Reviewed Books of 2022: Mystery and Crime 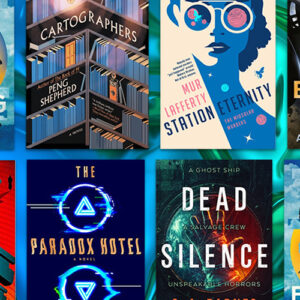 I know, we've run a lot of lists this December. But when there are so many great subgenres, why not highlight them all? Onwards...
© LitHub
Back to top