Although Americans fought mass murderers in World War Two, by the latter half of the 20th century the country was encountering a new breed of homegrown maniac: the serial killer. The media turned these criminals into instant celebrities. Unlike mass murderers like Pol Pot or Hitler or even the homegrown Timothy McVeigh, serial killers often don’t have a political ideology. Legitimized mass murderers like Pot Pot or Hitler historically lead a country with appointed department heads of torture, displacement, and terror. In this way genocide operates as an ideology. Serial killers, however, are the dilettantes of strategic homicide: they still have to keep their day jobs.

By now, the trope of the alienated white male who turns his basement into a boutique of butchery is as familiar as the fangs of a vampire or the claws of a werewolf. Serial killers, with their supposedly complex psychology and elaborate rituals, are the modern monster, made all the more thrilling for their documented existence. One of the first serial killers to seize media attention was Jack the Ripper, whose grotesque murder of five prostitutes in a squalid district of 1888 London became news because of the apparent anatomical knowledge of the killer. The idea that an educated and therefore probably wealthy person, as opposed to a run-of-the-mill impoverished fiend, could commit such atrocities was captivating because it upended the social order. The ruling class, it seemed, wasn’t entirely hunky dory.

Cinematic adaptations of the Ripper story exist as early as 1927, with Alfred Hitchcock’s The Lodger: A Story of the London Fog, and have continued throughout the decades, including 1988’s centennial anniversary of the murders via Jack’s Back, a B-movie notable chiefly for featuring a smoldering James Spader as a disaffected shoe store manager turned inadvertent detective. But these portrayals, although they did try to solve the case, were more focused on the atmosphere of terror unleashed by the murders and less on the psychology of the killer, as Jack the Ripper has always been an unfathomable abomination, a void into which society’s fears about the breakdown of civilization can be projected.

It was with 1986’s Manhunter and 1991’s The Silence of the Lambs that understanding the psychology of the man behind the murderer became a staple of pop culture. Hannibal Lecter’s appeal has rested largely on his duality; he is both as highbrow and lowbrow as it gets, sitting on the Baltimore Philharmonic Orchestra’s board of directors one moment and chomping on a colleague’s liver the next. Although Thomas Harris’s books were based on real-life figures, this kind of marriage of sophistication and brutality created a stereotype, an almost irresistible nexus into which the spectrum of humanity could be contained. Ordinary people were flawed, but serial killers were superhuman and had extraordinary skills. In 2001’s adaptation of the graphic novel From Hell, this stereotype is furthered as Jack the Ripper’s identity as a highly esteemed member of the British elite becomes the focus of the movie, his eyes flashing a monstrous red. In a relatively prosperous economy, as the United States experienced during the 1980s and 1990s, class issues are superseded by novelty. It’s not so much about the questionable fitness of the aristocracy or the terror of society breaking down as it is about the peculiarity of certain blood-stained individuals. How do hunters of humans think? How do they hide among us?

Article continues after advertisement
The murderer himself remains largely faceless, a kind of tropical depression of menace which is far more terrifying for its effects on other people than its actual physical composition.

David Fincher started to pare back the emphasis on serial killer as twisted übermensch with 2007’s Zodiac, which moves at whiplash speed through a trail of clues, forensic data, and decaying personal relationships. Covering a period of over 20 years, the movie tracks how the determination of a cartoonist at the San Francisco Chronicle to uncover the Zodiac’s identity eventually becomes an all-consuming obsession. The movie also functions as a sly critique of the hunger for celebrity; the Zodiac killer, who regularly sends notes to the Chronicle’s newsroom, is clearly seeking fame. The crimes themselves become almost incidental to his need for media attention. The murderer himself remains largely faceless, a kind of tropical depression of menace which is far more terrifying for its effects on other people than its actual physical composition. Like Jack the Ripper, the Zodiac killer was never apprehended in real life.

With 2017’s Netflix series Mindhunter, Fincher manages to deflate the allure of serial killers by portraying them less as masterminds and more as prolific thugs who had picked up some therapeutic lingo. Based on interviews the FBI conducted with a number of killers in the 1970s in an attempt to create a psychological profile, the series acquaints us with the banality and gruesomeness of the murdering mind. Whether it’s done with a semi-automatic rifle from a Las Vegas hotel room or a knife in a crowded dormitory (as was the case with Richard Speck, who murdered eight nurses in a single night in 1966), the urge to kill random people has always been located at the intersection of horror and opportunity. In the dim corners of Mindhunter’s prison sequences, we see monsters at rest, chained to grimy tables.

But the filthy gloss of media portrayals is never nearly as bizarre and upsetting as the real thing. Especially when the real thing is trying to market a book, sans handcuffs, as Jeffrey Dahmer and his father did in 1994. An alcoholic who had trouble holding down a job, one of Dahmer’s earliest murders occurred during what he concluded must have been a drunken blackout. Although Dahmer began murdering young men when he himself was only 18 years old, he went through periods of abstention, gradually ramping up his activities while the smells emanating from his apartment drew complaints from his neighbors. One of his younger victims famously escaped, only to be shooed back into Dahmer’s arms when the police officers who encountered the young man were swayed by Dahmer’s claims that the two were simply having a lover’s quarrel. And what was the purpose of all this torture and death? One of Dahmer’s long-term goals was to amass enough human skulls to build a throne in his one-bedroom apartment, which he wanted to paint black.

Although he was focused on developing his bone preservation techniques, Dahmer was aware of his newfound fame. Dahmer was finally caught in July 1991, when another potential victim managed to stumble out of the blood-stained apartment and bring the police back with him. According to the documentary, The Jeffrey Dahmer Files, within hours of being taken to the police station, Dahmer promised Pat Kennedy, the detective assigned to his case, that Kennedy would become famous. As the police uncovered decapitated heads in the freezer, jars filled with human remains, and Polaroids of bodies in different stages of decomposition, Dahmer settled in to his role as psychopathic it-boy.

Dahmer’s monstrosity is only partly rooted in the gruesome nature of the crimes; it is his understanding of his own white privilege, and his corresponding, “Welp, guess I’m a serial killer,” charm, that makes him such a standout case. Consider the interview that television broadcaster Stone Phillips conducted with Dahmer and Dahmer’s father, Lionel, in 1994. Dahmer is relaxed, affable even, describing his atrocities the way a sports star might recall particularly difficult games. Here is a man who killed 17 people, being interviewed without handcuffs or any other visible restraints. There is an assumption that Dahmer will behave for the cameras, and not start eviscerating Stone Phillips.

“Was it painful to read?” Phillips asks Dahmer about the book that Lionel, who is sitting next to his son in a green sweater, had written about Dahmer’s childhood. “Yes, it was painful,” Dahmer says, and then after reflecting for a moment, adds that “some parts of it were fun to read.” The vibe is that of a redemptive conversation with a fallen Midwestern son, not point-blank exposure to a manipulative cannibal with a father who hopes to make a buck or two off his kid from book sales. It is without question one of the weirdest moments in capitalism.

The vibe is that of a redemptive conversation with a fallen Midwestern son, not point-blank exposure to a manipulative cannibal with a father who hopes to make a buck or two off his kid from book sales.

Unlike his peers, Dahmer never appeared particularly distressed by his incarceration. With his polite Midwestern schtick, Dahmer always seemed in control, a self-accepting atrocity. Contrast this with Ted Bundy’s final interview, which was conducted with the Christian evangelist and founder of “Focus on the Family,” James Dobson, on the eve of Bundy’s execution. Bundy, who admitted to killing thirty women over a four-year period, broke out of prison twice after his initial capture, only to be permanently incarcerated in 1978. He lacks Dahmer’s ease; in the interview with Dobson, he is obviously desperate, agreeing with the evangelist that pornography is to blame for his crimes in a blatantly manipulative attempt to save his own skin. “Through God’s help, I’ve been able to come to the point—better late than never—to feel the hurt and the pain I’m responsible for,” Bundy mugs, making a point of not directly admitting that he is remorseful for his actions. But Dobson’s choice to use a serial killer to prop up his political agenda is hardly less evil. Recorded on January 23, 1989, the interview captures both Bundy’s final lies and the early years of the Christian Conservative Movement, which would entangle itself in the Republican Party until it ironically succeeded in allowing Nazis, those old-school mass murderers, to openly share the national political stage in 2016.

Celebrity serial killers are more than the sum of their crimes; invariably, they represent their particular cultural moment. Much as Jack the Ripper became the avatar for the class anxieties of  19th-century Victorian civilization, Jeffrey Dahmer was 20th century capitalism’s smirking emblem, a monster who played the system. And yet, Dahmer now seems like a throwback to a slower era, a time when serial killers hunted their victims personally. His victim list of 17, while horrific, is currently matched within minutes by guns wielded at American schools, movie theaters, and workplaces. It would seem that the 21st century serial killer no longer needs to labor in secrecy before stepping into the limelight.

Julia Ingalls is primarily an essayist. Her work has appeared or is forthcoming in Slate, Salon, Dwell, Guernica, The LA Weekly, The Nervous Breakdown, Forth, Trop, and 89.9 KCRW. 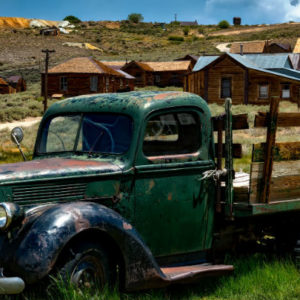 I’m not sure when exactly I found myself interested in the concept of Grit Lit as a genre. I can remember talking to Smith...
© LitHub
Back to top