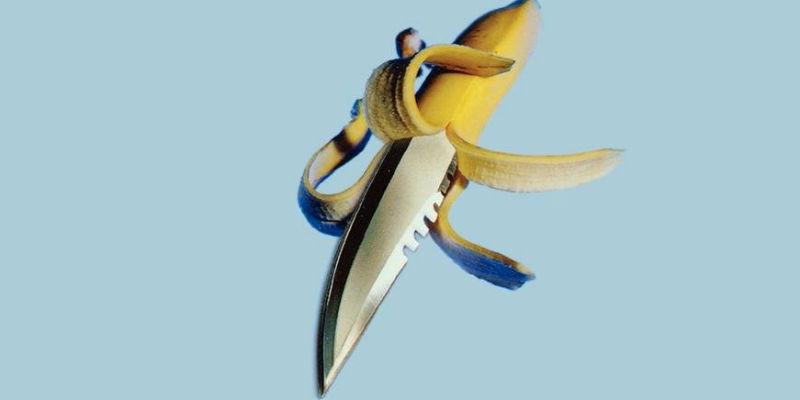 10 Crime Novels that Strike a Balance Between Humor and Noir

When I began writing my trilogy featuring Ravi Chandra Singh, the British-Indian private detective who worries he’s going insane because he can see gods and keeps blowing up people’s lives whenever he tries to do the right thing, I wanted the series to be funny rather than grim or gritty. Humor in crime stories is not just about jokes to sugarcoat the nastiness, but part and parcel of the author’s worldview.

“Dying is easy, comedy is hard,” as the saying goes, and that certainly applies to thrillers. We usually expect crime thrillers to be serious because of the subject matter, and it takes a very particular attitude to make them funny at the same time. It’s a tricky balancing act, and that probably explains why there aren’t that many comedic crime novels out there. Here are ten funny crime novels that have influenced me. 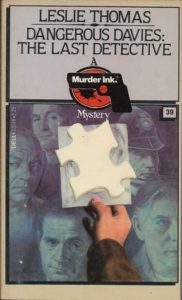 First in a series of British novels that they don’t really publish anymore, a funny shaggy-dog series about a schlubby cop in a low-key London suburb who shambles along and occasionally stumbles upon cases bigger than petty larceny and minor misdemeanors. His fellow cops call him “Dangerous” because he’s very much not. He would like nothing more than just to hang out in the pub after work with his Welsh drinking buddy and his large dog and avoid another fight with his landlady, but life has bigger plans for him. Well, slightly bigger plans than usual before letting him back to the pub to hang out, anyway. 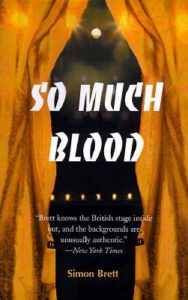 British novelist Simon Brett is still writing these comedy murder mysteries set in British show business in which struggling actor Charles Paris keeps finding himself neck-deep in murder in virtually every play, movie or TV show that his long-suffering agent manages to book him. Show biz bitchiness, envy and backstabbing often drive the murders, and our detective here is a perennially drunk struggling actor with a wandering eye for the ladies and an exasperated ex-wife who often stumbles upon the answer to the murderers as much as he stumbles upon the murders themselves. The books are enjoying a second life as a BBC radio series starring the sublime Bill Nighy as the hilariously louche Charles Paris. 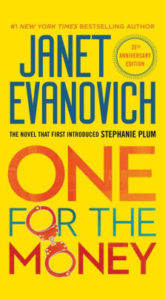 This is the first book that introduced Evanovich’s heroine Stephanie Plum, a New Jersey gal whose life is a mess. She needs money and a job, and reluctantly tries her hand at bounty hunting. Her first bounty is a cop on the run who becomes her romantic interest and much better company than the psychopaths, sleazebags, and predators she comes across as she learns the ropes of being a bounty hunter one mistake at a time. As much a romantic screwball comedy as a crime thriller, here’s a deep sense of the New Jersey milieu as Janet Evanovich wrote about a world she know well. She’s gone on to write more than twenty books featuring Stephanie Plum, but the first entries are always the freshest and funniest. 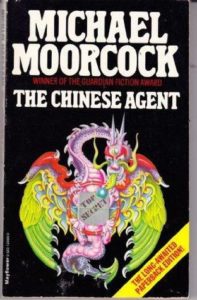 The Chinese Agent by Michael Moorcock

This was fantasy and Science Fiction master Michael Moorcock’s reaction to the James Bond series, a farce that takes the piss out of the genre by turning the superspy hero into a self-serving coward who keeps falling upwards almost despite himself. Events beyond his control keep landing him in the wrong place at the right time where his reputation as a superspy and assassin keep his enemies terrified of him. He’s really frozen in terror, but they think he’s being perfectly still with that grin on his face as the stance of a ruthless killer toying with them. This is one of the more obscure books by Moorcock that might be one of those he wrote quickly in a weekend to pay off a tax bill, but is no less entertaining or well-written than his more famous fantasy epics. 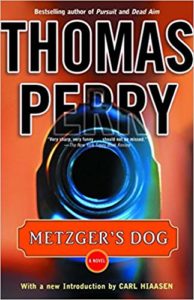 One of the few spy novels not by Ross Thomas that’s also a comedy, and the only one of its type written by Thomas Perry, who went on to write the June Whitfield novels, which are not known for their humor. I wonder if Perry was influenced by Ross Thomas’ books here. A suave career thief and his smart girlfriend set out to steal a large box of cocaine but ends up with secret CIA papers that The Agency desperately wants back. This kicks off a story of the thief and his girlfriend cook up a scheme to ransom the papers and end up running rings around a bunch of clueless and inept CIA agents who think they’re up against ruthless terrorists and nearly destroy Los Angeles in their pursuit of the papers. It’s too bad Perry never wrote more books about these characters. This is still my favorite of his novels. 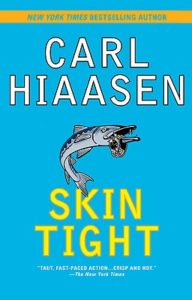 Carl Hiaasen’s novels combine comically nutty characters, absurd farce and the author’s dry, snarky voice to paint a Florida as the place where everything insane, ridiculous and awful about America is concentrated more than anywhere else. I’m particularly fond of this book for the awful plastic surgeon, the sardonically stoical investigator hero who’s prone to matter-of-fact but creative acts of violence in self-defense, and the escalating plot involving mob hitmen, a whistleblowing nurse, a mean ex-wife and the producers of a reality TV show about plastic surgery mishaps all contribute to a escalating series of murderous farce make this book a model of plotting. 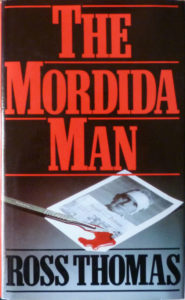 The Mordida Man by Ross Thomas

Ross Thomas was one of the few writers who wrote spy novels that were comedies. They were thrillers still, but Thomas had a jaundiced eye on what spies got up to that he portrayed them and their situations as dark comedy. This novel is prime example of espionage-as-farce. Written at the height of the Cold War and when Libya was considered a threat, Thomas presents a world of spies who screw up horribly and scramble to cover their asses, a corrupt former CIA agent, an unstable dictator, crafty diplomats, pissed-off terrorists make life complicated for a quirky ex-politician-turned-negotiator when he’s tasked by the US President to rescue his brother from terrorists. 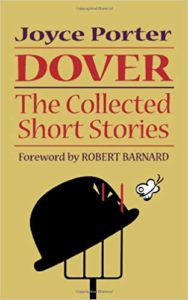 The Dover Stories by Joyce Porter

Joyce Porter has a talent for creating oddball characters in her crime stories, and she created a detective series and a spy series starring wildly unsuitable heroes. Wilf Dover is the worst detective in Scotland Yard, a fat, lazy, unhygienic slob who would rather spend his time drinking and smoking, and goes off on assigned murder cases with a grumble. His straight-arrow partner Sergeant McGregor has his hands full trying to keep him on point. Dover usually lets McGregor do all the work, but every now and then works things out all by himself. He’s a terrible detective because he can’t be bothered, but when he does bother, he’s actually good at it. The Dover stories are usually riotous comedy, but Porter also used them to explore issues like far-right politics, sectarianism and radical feminism. 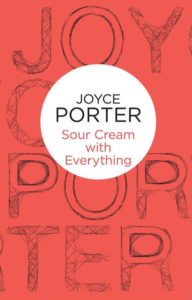 Sour Cream and Everything by Joyce Porter

Joyce Porter turns her farcical eye on the spy genre here with the first of four novels featuring the reluctant spy Eddie Brown, a lowly comprehensive school teacher recruited by a ramshackle division of the British Secret Service to impersonate a Russian double agent in their attempt to hoodwink the Soviets. His training is barely adequate, he’s out of his depth, he hates being stuck in a job he never wanted, and things keep threatening to go horribly wrong. There would be three more novels in this series, and the absurd farce of Cold War spy games never lets up. As I looked back on Joyce Porter’s novels, I suddenly realized how much she might have influenced the Ravi series. 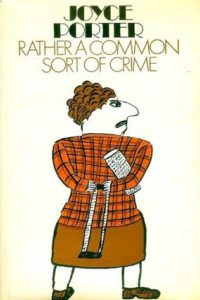 Rather a Common Sort of Crime by Joyce Porter

I almost didn’t include Porter’s third series in this list for fear it was getting long, but felt obliged because it may also have influenced my approach to the Ravi novels. Here Porter introduces the Honourable Constance Morrison-Burke, an amateur sleuth who fancies herself smarter than the police when she’s really a bumbling idiot. She doesn’t let that stop her, riding high on a cloud of supreme self-belief, as she bulldozes her way through cases leaving disaster in her wake. She is the posh private detective you hire only if you want your problem to become a massive catastrophe. This series feels like an outright spoof of the genre rather than a straight telling, and it highlights the silliness and absurdity of amateur sleuth characters quite mercilessly.

Adi Tantimedh has a BA in English Literature from Bennington College and an MFA in Film and Television Production from New York University. He is of Chinese-Thai descent and came of age in Singapore and London. He has written radio plays and television scripts for the BBC and screenplays for various Hollywood companies, as well as graphic novels for DC Comics and Big Head Press, and a weekly column about pop culture for BleedingCool.com. He wrote “Zinky Boys Go Underground,” the first post-Cold War Russian gangster thriller, which won the BAFTA for Best Short Film in 1995 and is the author of Her Nightly Embrace, Her Beautiful Monster, and Her Fugitive Heart. 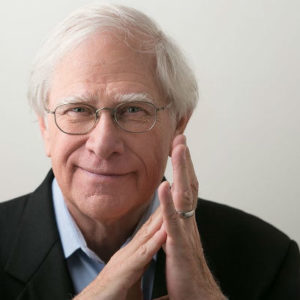 In the history of liberated lawmen, Lucas Davenport is about as free as they come. He's the charismatic lead of the long-running,...
© LitHub
Back to top